Accessibility links
Advice From Uncle Sam On Good Parenting : Shots - Health News Nervous mothers and dads once had only family and friends to turn to for advice on kids. Then, in 1912, the U.S. government created an agency devoted to children, and queries from moms poured in. 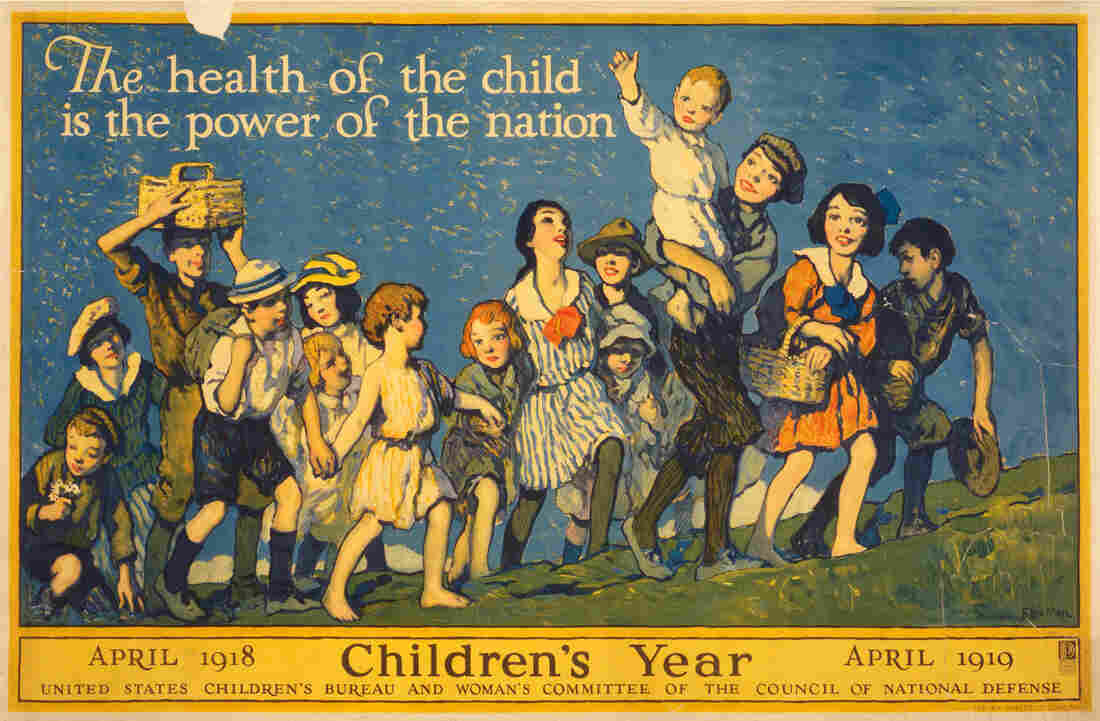 A poster put out by the U.S. Children's Bureau in 1918. Francis Luis Mora/Library of Congress hide caption 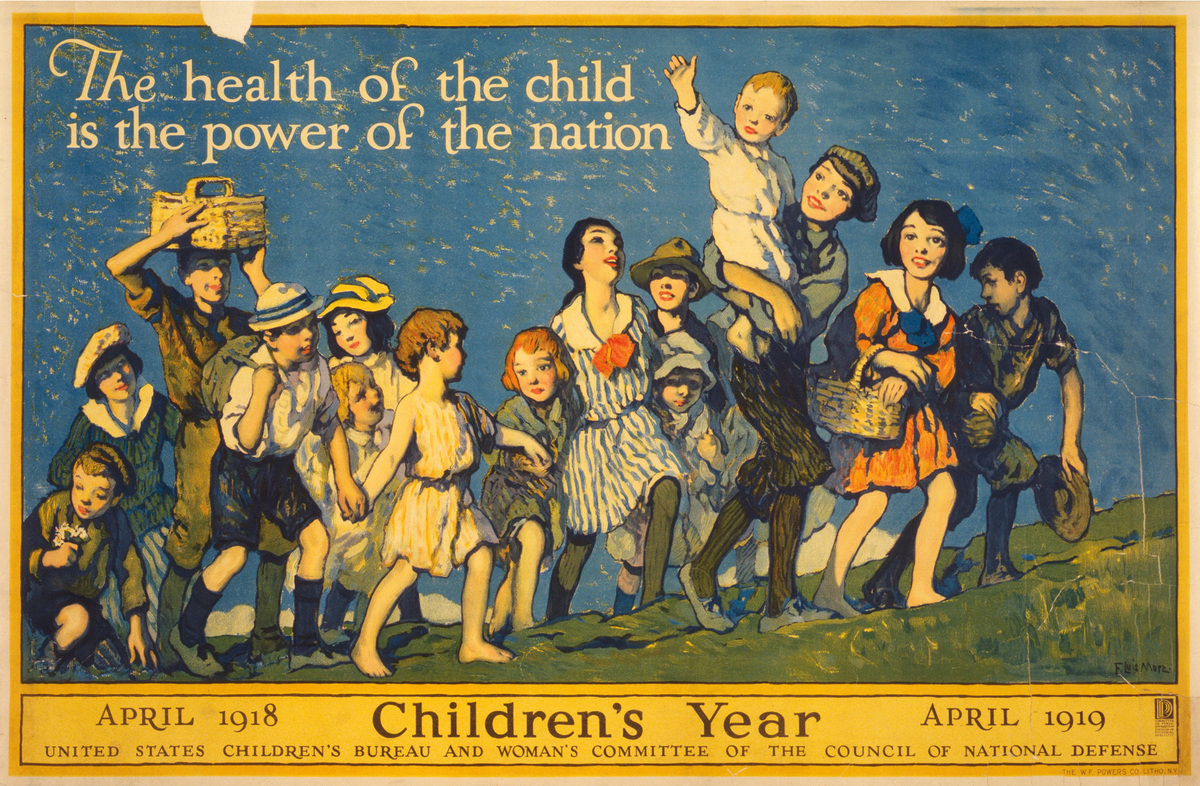 OK, so you've just left the hospital with your newborn baby. You're relieved, because the baby is healthy, your heart overflows with love and you're excited to begin this new chapter in your life. Then, most parents will tell you, on the way home a strange feeling sets in.

how to raise a human

It's as if you went to sleep in one world and woke up in another, a world that seems familiar but slightly off-key. As you gaze into the eyes of this fragile new being, it hits you: "What have I done?" And, more importantly, "What do I do now?"

Anxious parents in the U.S. today have an overwhelming number of choices to help them figure out what to do when it comes to child rearing — books, blogs, celebrities and developmental psychologists are all too happy to supplement the usual circle of family, friends and community.

But it wasn't always so. A century ago, many new parents were just as eager for authoritative, trustworthy advice, but there wasn't that much of it around, especially for women isolated from extended family by oceans or frontiers, or for whom poverty made doctor visits a luxury. 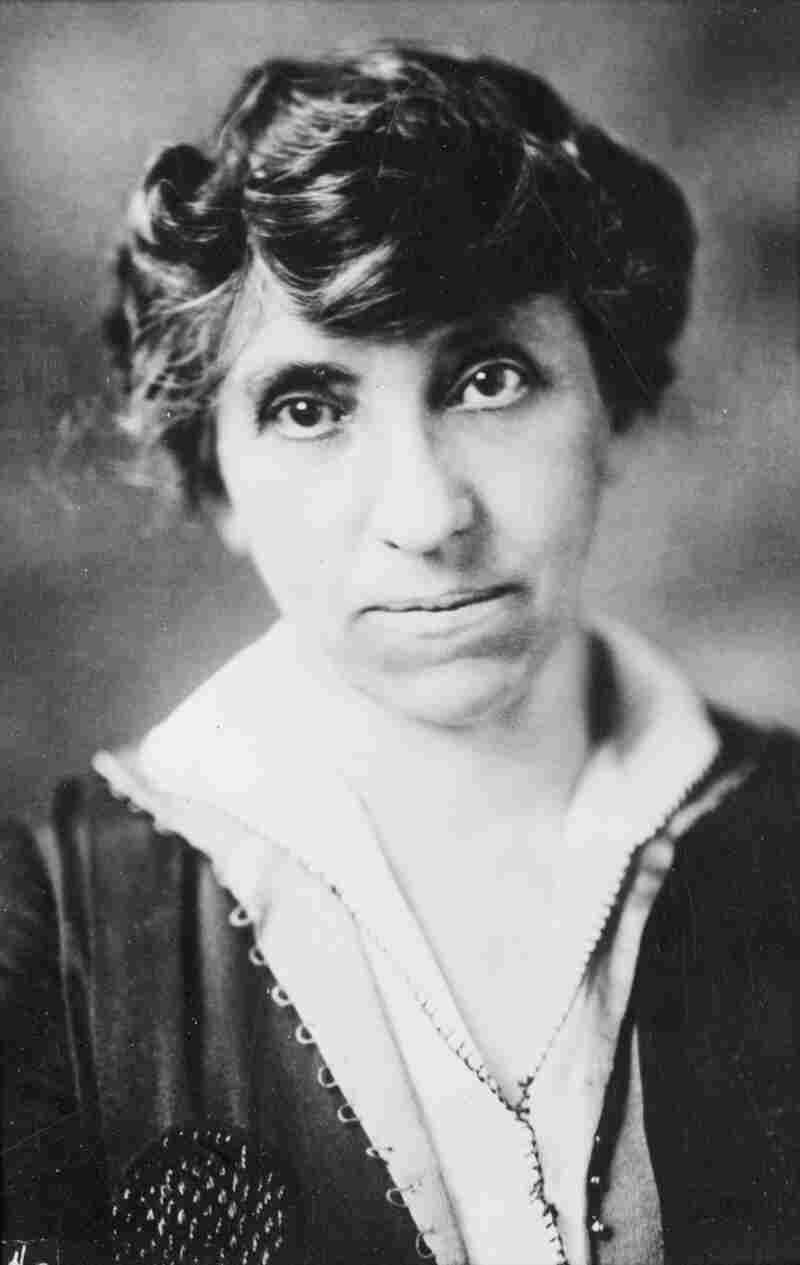 So some women, like Alice Phelps, turned to Uncle Sam for help. In October of 1916, Phelps was living on a ranch in Wyoming and pregnant with her third child. In an act that must have felt like pure desperation she pulled out a sheet of paper and wrote a letter to Julia Lathrop, the director of a government agency in Washington, D.C., some 2,000 miles away.

Dear Miss Lathrop, I live 65 miles from a doctor and my other babies were very large at birth, one 12 pounds, the other 10 and a half. I have been very badly torn each time, So many of my neighbors die at giving birth to their children. ...

As head of the United States Children's Bureau, Lathrop was used to getting letters from mothers asking her advice. She was also used to helping people in difficult situations.

Before being named the first director of the agency in 1912 (and long before women got the right to vote in the U.S.), Lathrop had worked closely with other leading social progressives, including Chicago's Jane Addams. Both were deeply involved in creating and running Hull-House, a settlement house in that city that provided good food, education, contraception and other services to the city's poor.

Vassar College historian Miriam Cohen, author of Julia Lathrop, Social Service and Progressive Government, says Lathrop became "really passionately concerned about poor children" during her years at Hull-House. She eventually went on to help in the creation of the juvenile justice system.

When Alice Phelps' moving letter arrived in Washington, it apparently made a deep impression on Lathrop: Phelps told of riding miles through subzero temperatures to help a distant neighbor who was in the throes of a birth that had gone terribly wrong.

... She was nearly dead when I got there, and died after giving birth to a 14 pound boy. I am so worried, and filled with perfect horror at the prospects ahead. If there is anything what I can do to escape being torn again, won't you let me know? ...

Special Correspondent Renee Montagne teamed up with ProPublica's Nina Martin for a six-month long investigation on maternal mortality in the U.S.

Lathrop heard this cry for help and wrote back to Phelps that her letter "makes very urgent the great question of protecting motherhood." But what could Lathrop do to help women like Alice Phelps? Her agency wasn't designed to provide health care. In fact, it had very few resources and had been created with a narrow mission: to conduct research.

Historian Kriste Lindenmeyer, dean of Arts and Sciences at Rutgers University-Camden, says the Children's Bureau grew out of an idea that was still very new at the time: that the U.S. government should have a role in the welfare of the nation's children and families.

"The federal government had dealt with economics and building roads and bridges and trade, but certainly not social welfare issues," says Lindenmeyer, author of the 1997 book A Right to Childhood, The U.S. Children's Bureau and Child Welfare, 1912-1946.

But by the late 1800s, Lindenmeyer says, the nation and the needs of its citizens were quickly changing. The population was growing — 12 million immigrants had entered the country between 1870 and 1900 — and more and more people were moving from the countryside into the cities, and rejecting the old ways of doing things, Lindenmeyer says. Science and "modern medicine" were advancing in public esteem.

"Americans thought of their country as a very modern and industrializing country, in fact the model for the rest of the world," she says.

Striving for modernity, perhaps, but many Americans' lives were a downright struggle.

Lindenmeyer ticks off the widespread social problems of the early 20th century: "Poverty, poor sanitation, ignorance of modern health practices, parents who don't have access to good care or information."

And child death was a fact of life, in those days. In 1915, one out of 10 white infants in the U.S. and one of every five African American babies died before their first birthday, says Molly Ladd-Taylor, an historian at York University in Toronto and author of Raising a Baby the Government Way: Mother's Letters to the Children's Bureau 1915-1932.

Babies died in the summer," Ladd-Taylor explains. That's when food, especially milk, was more likely to quickly spoil or become contaminated and cause gastrointestinal illness. Equipment used to process food was more likely to carry and spread bacteria then, too.

"It was a given reality that there was nothing to do — [that] it was God's will," Ladd-Taylor says many people figured at the time. Babies died, and to try to change that, some thought, would have meant challenging nature.

Of those children who did survive infancy, she says, many dropped out of school at a tender age to work in mines and factories.

Increasingly, Americans were becoming aware that many children lived and worked in awful conditions — and that wasn't something they were proud of.

Lindenmeyer says social reformers of the time — mostly well-educated women who were often unmarried and childless — took up the cause, arguing to lawmakers that children are a national resource, and that if America's leaders didn't soon do something to help the next generation thrive, the future of the still-young country was at risk.

The social reformers were blunt — criticizing lawmakers who could spend tens of thousands of dollars fighting the boll weevil but couldn't find the money to invest in the nation's children.

Roughly 30 percent of the deaths in America in those years were of children under the age of 5. Some historians estimate that the annual number of deaths of very young children in the U.S. around that time ran as high as 300,000. Ladd-Taylor says that may be an underestimate; births weren't even registered in many parts of the country then.

There was a groundswell of support, Lindenmeyer says, "calling for the establishment of a federal agency that would focus solely on the needs of the nation's children and youth."

In 1912 the United States Children's Bureau opened its doors, founded on the idea that children are a national resource.

Lathrop, the bureau's first director, soon commissioned several studies to investigate the causes and conditions of infant mortality. She wanted hard data to dispel the notions that child death was inevitable or an act of God, and to prove that infant mortality was not about genetics but rather environment.

Indeed, her research showed that children often died from infections and conditions that could be prevented. To spread the facts, the Bureau published a series of advice pamphlets on infant care.

And soon, women were writing to the Children's Bureau by the thousands, with letters like this one, from a mother in Brooklyn, September 10, 1917,

... I have read about you and your wonderful pamphlets "Prenatal Care" and "Infant Care" in the Farm Journal... A year ago last March, I gave birth to a beautiful, fit boy. It lived but three days. The Drs. claimed he had a leaking heart; he died in convulsions. I would like to know if the injection the woman gave him of soap and water threw him in these convulsions, as he just moaned like a pigeon and his whole body shook after that and at night he was dead. ...

And this one from a mom in Texas asking for advice for her baby boy:

Ladd-Taylor says some mothers even submitted samples of the baby's feces on a piece of cloth, writing "This is greenish — what can you tell me about what that means?"

The ultimate effect of all those letters was to bring into focus how difficult it could be to raise a child in America — to be a mother in America. The writers wanted health care help for themselves and their children.

So Lathrop pushed for passage of the Sheppard-Towner Maternity and Infancy Act. The law, which was approved by both houses of Congress by a wide margin and signed into law in 1921. It sent funds to states to help them set up nearly 3,000 prenatal clinics, and funded home-nurse visits to teach moms how to keep their newborns healthy — though the funds were restricted from paying for medical care.

Today the law is acknowledged as "a landmark in the development of social welfare programs in the United States," according to the U.S. House of Representatives website.

"Julia Lathrop really clearly believed that these kinds of health education programs should be universal programs — available to everybody," Ladd-Taylor says. "Not a charity. An entitlement for citizens."

However, the Sheppard-Towner Act had many influential critics, including non-pediatricians in the American Medical Association who condemned it as a socialistic scheme.

The law was repealed in 1929, and Julia Lathrops' dream of accessible health care for all women and children was slipping away, too.

Still, Lindenmeyer says the Children's Bureau under Lathrop created a powerful, lasting legacy in the U.S. — the idea that every child has a right to childhood.

"That every kid has a right to dependency," she says. "That they don't have to support themselves, and that the government is the parent of last resort if everything else fails."

And what happened to Alice Phelps, the pregnant wife of a rancher? Julia Lathrop stepped up.

She contacted a doctor in the region to pay a visit to Phelps at home. And when it came time for Phelps' baby to be born, Lathrop made sure she delivered the child in a hospital.

Phelps later wrote to Lathrop with the good news that she'd given birth to "a darling of a baby" — an 8-and-a-half-pound blue-eyed boy.

What that healthy baby couldn't have known is that Julia Lathrop paid for his hospital birth, not out of her slender federal budget, but out of her own pocket.

NPR intern Menaka Wilhelm contributed to the researching of this story.