Accessibility links
A Clinic Creating 3-Parent-Babies In Ukraine Stirs Controversy : Shots - Health News A clinic in Kiev, Ukraine, stirs controversy by making babies with DNA from three different people to help women who are infertile bear children. It's the only clinic known to be doing this right now. 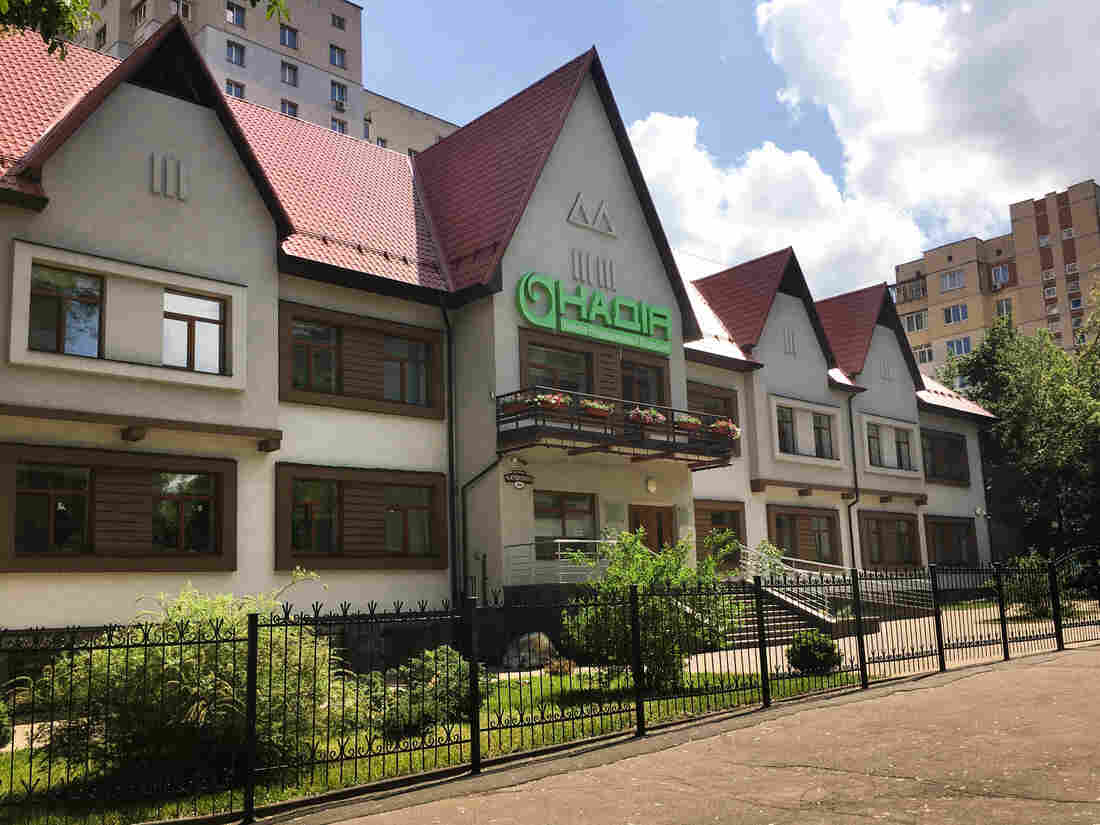 Nadiya Clinic in Kiev, Ukraine, is creating babies using the DNA of three people. The procedure can help women who are infertile have children. Rob Stein/NPR hide caption 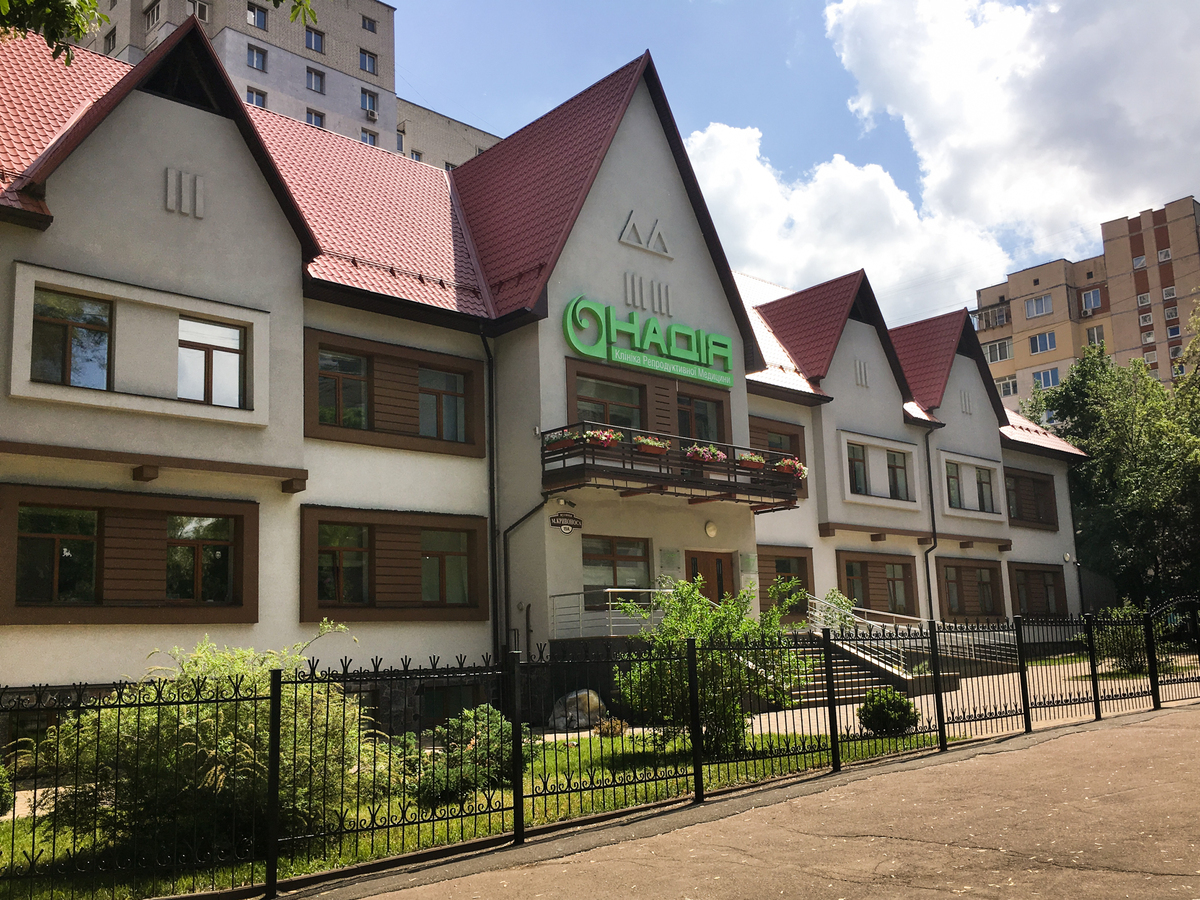 Nadiya Clinic in Kiev, Ukraine, is creating babies using the DNA of three people. The procedure can help women who are infertile have children.

In a clinic on a side street in Kiev, the capital of Ukraine, doctors are doing something that, as far as is publicly known, is being done nowhere else in the world: using DNA from three different people to create babies for women who are infertile.

"If you can help these families to achieve their own babies, why it must be forbidden?" Dr. Valery Zukin, director of the Nadiya Clinic, asks as he peers over his glasses. "It is a dream to want to have a genetic connection with a baby."

I traveled to Ukraine because Zukin promised unusual access to his private fertility clinic, including the first demonstration for a U.S. journalist of how scientists create "three-parent" babies — a procedure prohibited by the U.S. Food and Drug Administration.

Zukin also arranged the first-ever interview with a mother of a 15-month-old boy who is one of the four children he says he has produced this way.

Three more of his patients are pregnant, Zukin says, including a woman from Sweden. Women from several other countries including Britain, Brazil and Israel are going through the process, he says.

Leading ethicists and genetics researchers criticize the clinic for rushing ahead to use this method for infertility. No one knows whether children produced this way will be healthy, they say. And some worry the procedure may open the door to "designer babies." 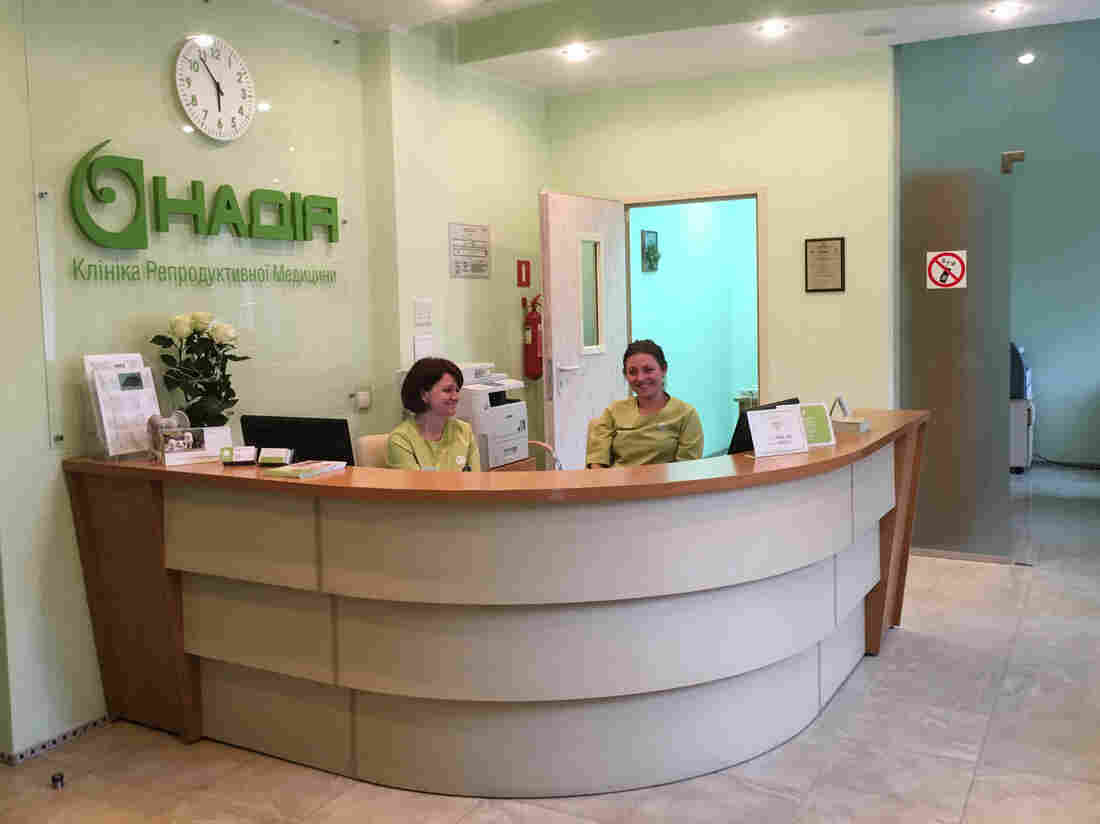 The clinic's procedure involves using the DNA from three people: the woman trying to have a baby; her male partner; and the egg donor who has provided 37 mitochondrial genes. Rob Stein/NPR hide caption 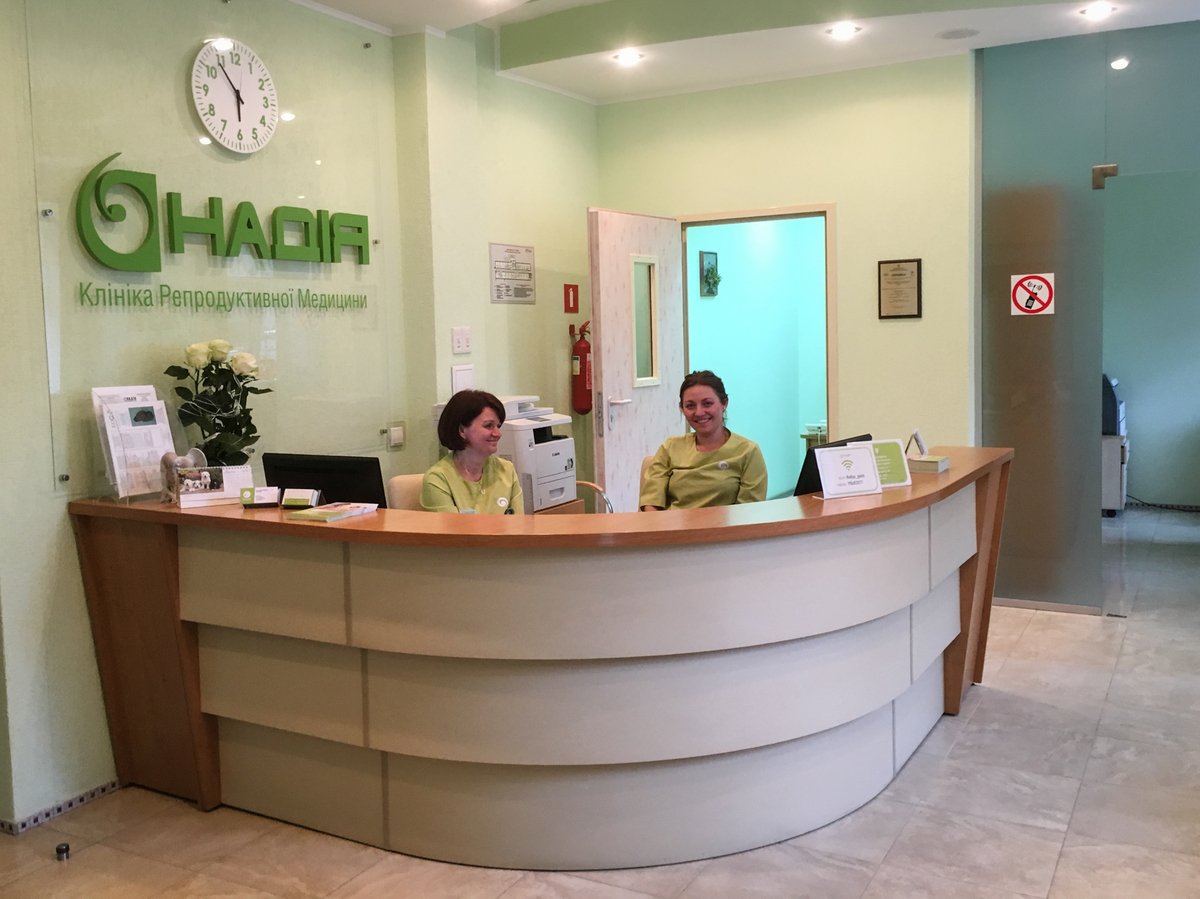 The clinic's procedure involves using the DNA from three people: the woman trying to have a baby; her male partner; and the egg donor who has provided 37 mitochondrial genes.

"This is pretty troubling," says Marcy Darnovsky, who heads the Center for Genetics and Society, a U.S.-based watchdog group.

But Zukin dismisses those criticisms.

"As a doctor I understand only one thing: We have parents who couldn't have children and now they have their own biological child. That's all," Zukin says.

Zukin has helped form a company, Darwin Life-Nadiya, with a New York clinic to market the service to U.S. women willing to travel to Ukraine. Ukrainian women pay about $8,000 for the procedure; for foreigners, it's about $15,000.

Transferring DNA from egg to egg

To show how the procedure works, Zukin sends me upstairs to the embryo lab. After putting on a sterile blue gown and booties, I meet Pavlo Mazur, a clinic embryo scientist.

"We will begin," Mazur says, as he takes a clear plastic dish out of an incubator.

The dish contains a 1-day-old embryo. It was created by fertilizing the egg of a woman with sperm from her male partner.

The dish also holds a second embryo. This was made using the same man's sperm to fertilize an egg from another woman, who was paid to donate eggs.

After sliding the embryos under a large microscope, Mazur starts a timer. He has only 15 minutes to complete the delicate procedure without risking damage to the embryos.

A monitor nearby displays what Mazur sees through the microscope. A round structure comes into focus on the screen. It's one of the embryos.

"You see?" Mazur says, pointing to two smaller round structures inside. They contain the DNA of the man and woman trying to have a baby.

"One is from sperm. It's paternal," Mazur says. "And the second one is maternal." 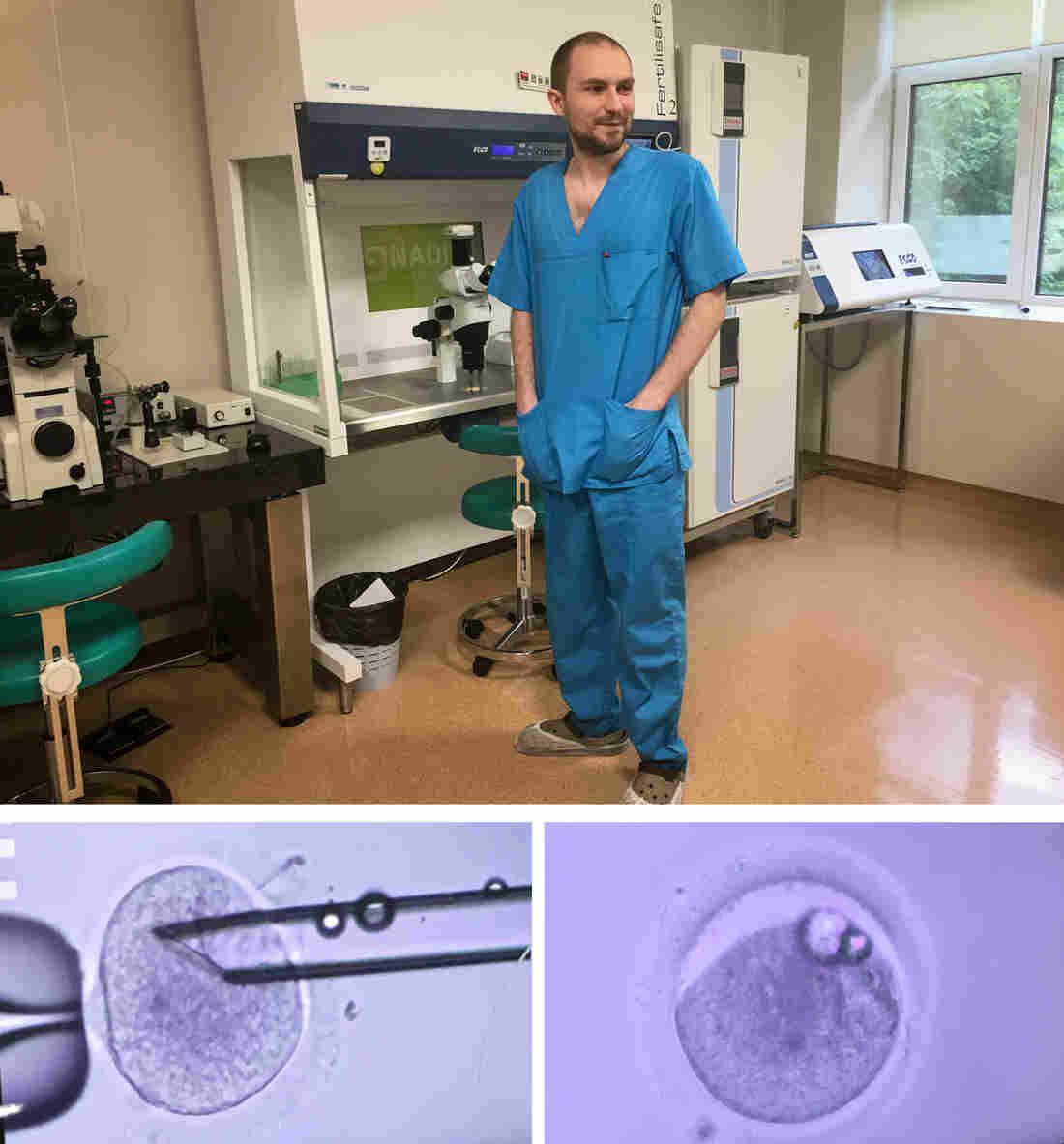 Pavlo Mazur, a clinic's embryo scientist (top) inserts a needle into a fertilized egg (bottom left) to extract the DNA of a man and woman trying to have a baby. He then transfers the DNA into a fertilized egg from an egg donor that has had most of its DNA removed. That creates an embryo (bottom right) with DNA from three different people. Rob Stein/NPR hide caption 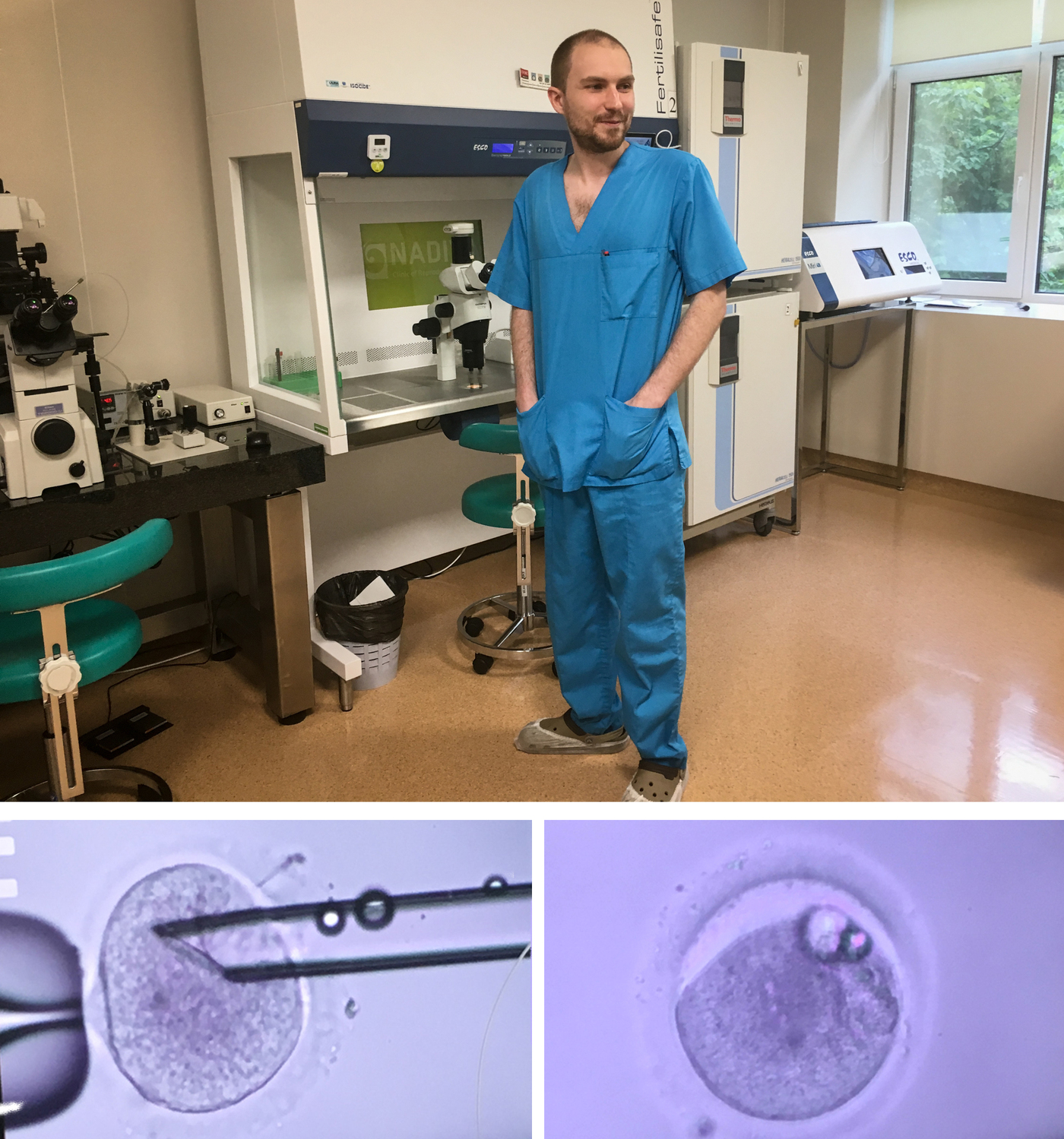 Pavlo Mazur, a clinic's embryo scientist (top) inserts a needle into a fertilized egg (bottom left) to extract the DNA of a man and woman trying to have a baby. He then transfers the DNA into a fertilized egg from an egg donor that has had most of its DNA removed. That creates an embryo (bottom right) with DNA from three different people.

Mazur slowly inserts a tiny, hollow glass needle into the fertilized egg. Even though Mazur is under pressure to work fast, he can't move too quickly.

"Very steady and slow," Mazur says. "We don't want to damage it, right? We want it to survive."

He uses the needle to extract the would-be parents' DNA. Mazur does the same thing with the second fertilized egg, removing all the DNA — except for 37 genes known as mitochondrial DNA.

"It's like an universal currency for a cell," Mazur says. "It helps for all processes within the cell."

The next step is to transfer the DNA of the woman and man trying to have a child into the donor's mostly gutted embryo — empty except for the other woman's mitochondrial DNA.

"And now we will just try to put the genetic material of our patient inside," Mazur says as he gently inserts the needle holding the couple's DNA and injects the genes.

"That's it," he says, glancing at his timer to see there are still two minutes left.

"So, you see? It's inside," Mazur says, pointing to the couple's DNA. "It will develop into embryo."

The Nadiya clinic is transferring embryos reconstructed this way into the wombs of women trying to become pregnant.

So far, the clinic has tried the procedure on 21 women. Fourteen attempts failed, probably because the women were older, the clinic staffers say.

But the other women either had babies or are pregnant. They were younger, but could never produce viable embryos on their own.

These babies end up with DNA from three different people: the woman trying to have a baby; her male partner; and the egg donor who has provided 37 mitochondrial genes. That's why they're called three-parent babies.

But Mazur says that label is wrong.

"These babies — they have DNA from mother and from father. So they are genetically related to their parents," Mazur says.

The overwhelming majority of the baby's DNA comes from the nucleus of the cell. And those are the genes responsible for the traits that most people consider their genetic inheritance, such as their eye and hair color, height, weight and personality.

The bit of mitochondrial DNA is "incomparable," Mazur says. "These children are more like their parents — not donor."

Mazur will present the clinic's latest results at the European Society of Human Reproduction and Embryology's annual meeting in Barcelona in July.

Some scientists are welcoming this as a potentially exciting new option for some women.

"It is pioneering work," says Dietrich Egli, an assistant professor of developmental biology at Columbia University Medical Center in New York. The procedure is technically known as "pronuclear transfer."

"What we can learn from their work is that pronuclear transfer may be useful for some cases of infertility," says Egli.

But critics say it's far too soon to be attempting this procedure to create children.

"This is really an irresponsible kind of human experimentation," Darnovsky of the Center for Genetics and Society says. 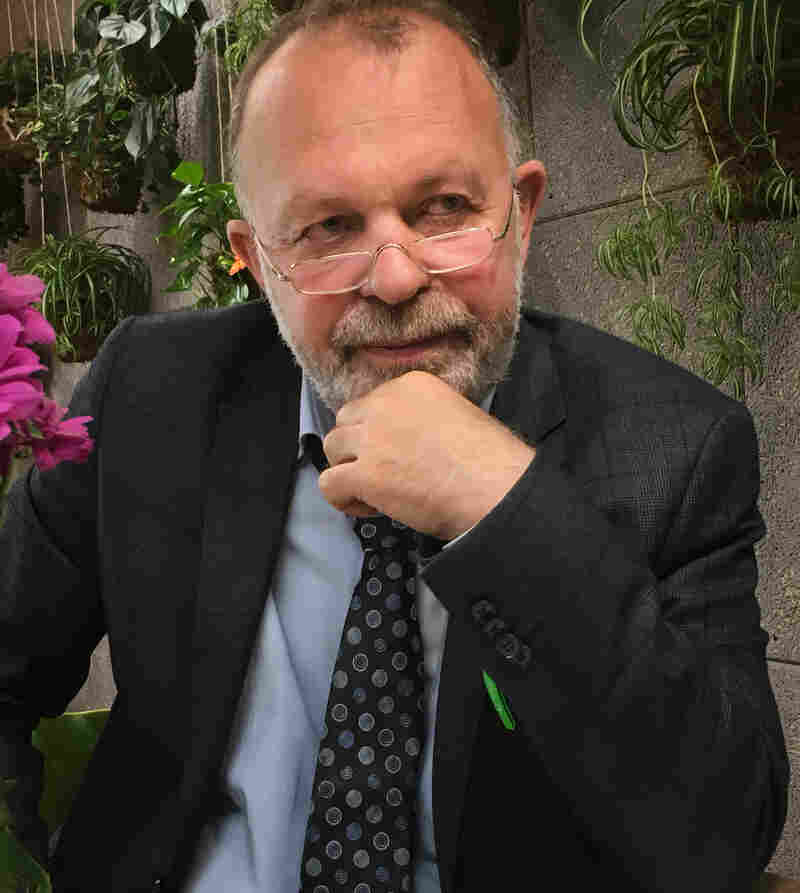 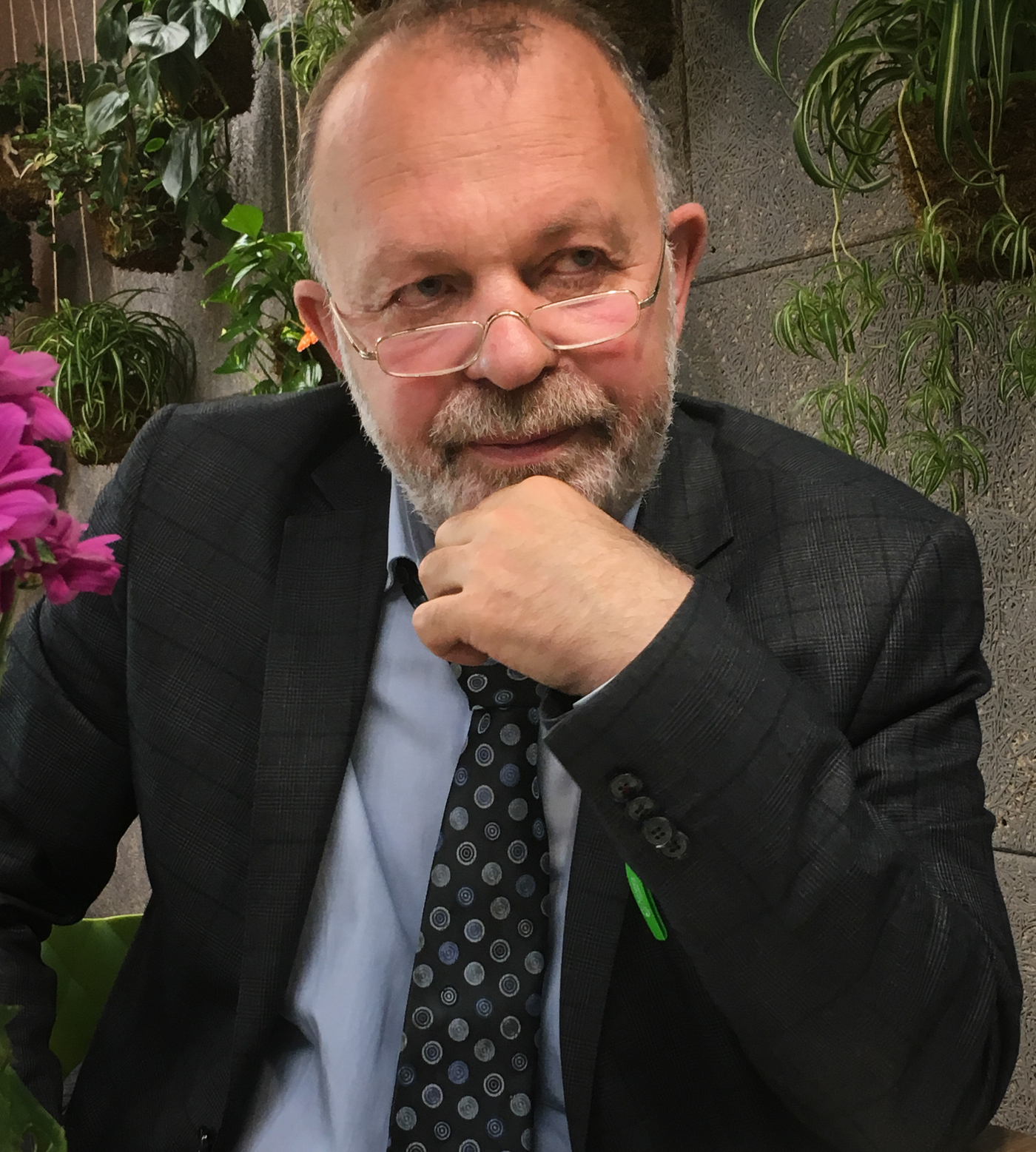 Dr. Valery Zukin runs the Nadiya Clinic. He says all the babies he's created appear to be healthy.

Not nearly enough laboratory and animal research has been done to know if the procedure is safe, Darnovsky and others say.

"We just don't know what's going to happen to these children," Darnovsky says.

In the 1990s, a doctor in New Jersey injected fluid from healthy eggs into the eggs of infertile women, and some babies were born with mitochondrial DNA from three people. But that was discontinued after the FDA intervened.

Only one other baby is known to have been produced using a technique similar to the one being used by Zukin. John Zhang of the New Hope Fertility Center in New York performed a related procedure for a Jordanian couple to try to prevent their child from having Leigh syndrome, a disorder caused by defects in mitochondrial DNA.

That's why the procedure was developed — to help women carrying mitochondrial disorders have healthy children. In severe cases, these disorders can be fatal.

A U.S. National Academy of Sciences panel concluded it could be ethical to attempt the procedure for this purpose. But because the FDA won't allow it at all in the United States, Zhang went to Mexico as part of his effort to create the baby for the Jordanian couple in 2016.

Doctors in the United Kingdom have started trying the technique to prevent mitochondrial disorders. But the British doctors are being allowed to try to make only one baby at a time as part of a tightly regulated research program.

Zukin says he received approval for a five-year research program from the Ukrainian Postgraduate Medical Academy, which is under the auspices of the Ukrainian Ministry of Public Health. But Zukin concedes the procedure is far less regulated in his country. Nevertheless, he makes sure all the women understand they are undergoing an experimental procedure.

"We explain everything to the families. And not all families give permission for providing this experimental procedure," he says.

Because mitochondrial DNA can be inherited, Darnovsky worries the procedure is crossing a line that long has been considered taboo: making changes in human DNA that can be passed down to future generations. One fear is that a mistake could create a new disease that could be inherited.

Mitochondrial DNA is inherited from the mother. Zukin already has used the procedure to produce one baby girl — a girl who could one day pass the mitochondrial DNA to her own children.

Darnovsky worries the procedure could also open the door to creating babies who are genetically modified for other reasons.

"What we're seeing is a fast slide down a very slippery slope toward designer babies," Darnovsky says. "We could see parents feeling eager to give their children traits like greater strength, needs less sleep. Some people are saying that, 'Yes, there are genes for IQ and we could have smarter babies.' "

Zukin dismisses speculation about designer babies. He says he's interested only in helping women who are infertile have genetically related children or prevent mitochondrial diseases. And so far, all the babies he has created appear to be perfectly healthy, he says.

The only way to know whether the procedure works and is safe is to try it, he argues. He hopes to figure out how to make the procedure work for women suffering from age-related infertility as well, which would help far more women.

"If you would like to swim," he says, "then, first of all, you must jump in the water."