Accessibility links
Medicare Aims To Cut Rehospitalization Of Nursing Home Patients : Shots - Health News One in 5 Medicare patients who leaves the hospital for a nursing home ends up back in the hospital. The federal government will soon use bonuses and penalties to try to lower readmissions. 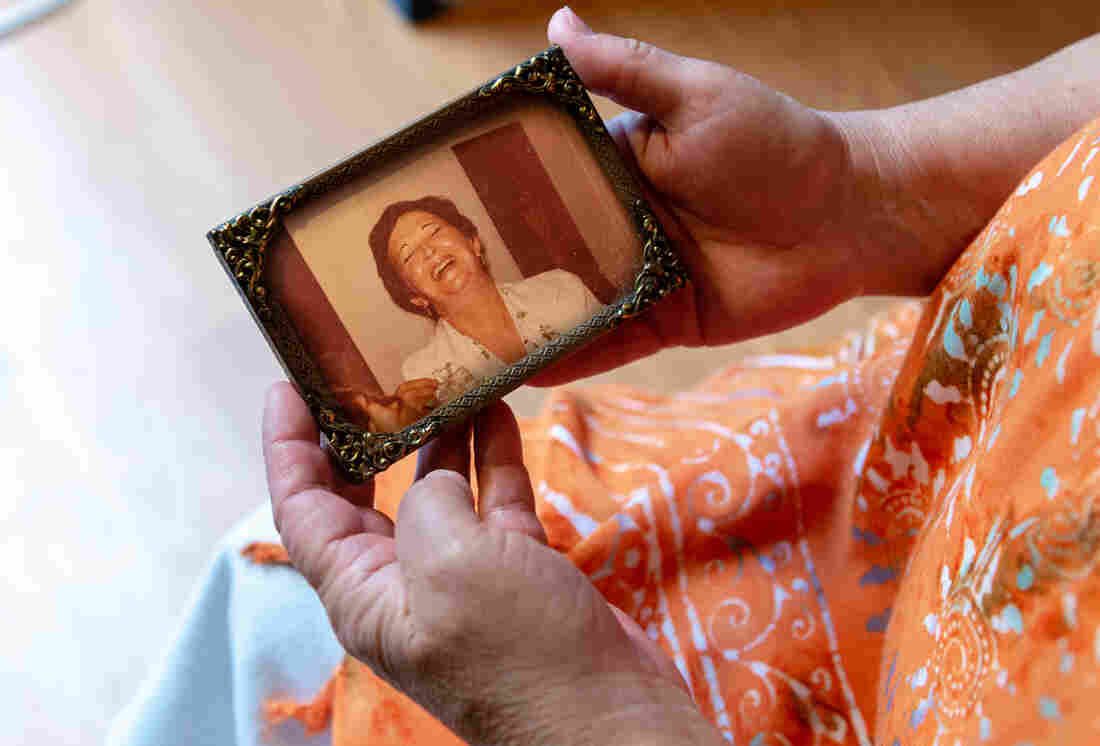 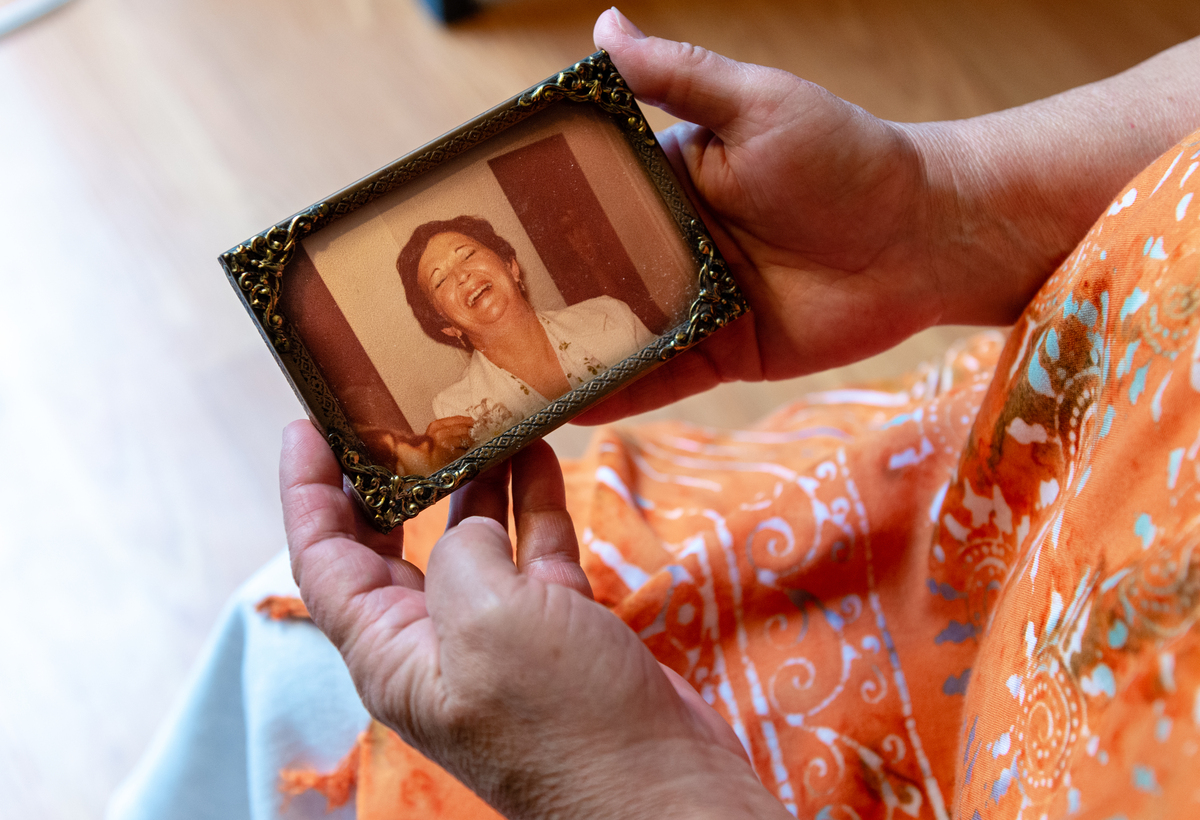 Deborah Ann Favorite holds a photograph of her mother, Elaine Essa. A nursing home and Essa's primary care practice paid to settle a lawsuit brought by the family.

"Oh my God, we dropped her!" Sandra Snipes said she heard the nursing home aides yell as she fell to the floor.

She landed on her right side where her hip had recently been replaced. She cried out in pain.

A hospital clinician later discovered her hip was dislocated.

That was not the only injury Snipes, then 61, said she suffered in 2011 at Richmond Pines Healthcare & Rehabilitation Center in Hamlet, N.C. Nurses allegedly had been injecting her twice a day with a potent blood thinner despite written instructions to stop.

"She said, 'I just feel so tired,' " her daughter, Laura Clark, said in an interview. "The nurses were saying she's depressed and wasn't doing her exercises. I said no, something is wrong."

Her children also discovered Snipes' surgical wound had become infected and infested with insects. Just 11 days after she arrived at the nursing home to heal from her hip surgery, she was back in the hospital.

The fall and these other alleged lapses in care led Clark and the family to file a lawsuit against the nursing home. Richmond Pines declined to discuss the case beyond saying it disputed the allegations at the time. The home agreed in 2017 to pay Snipes' family $1.4 million to settle their lawsuit.

While the confluence of complications in Snipes' case was extreme, return trips from nursing homes to hospitals are far from unusual.

With hospitals pushing patients out the door earlier, nursing homes are deluged with increasingly frail patients. But many homes, with their sometimes-skeletal medical staffing, often fail to handle post-hospital complications — or create new problems by not heeding or receiving accurate hospital and physician instructions.

Patients, caught in the middle, may suffer. One in 5 Medicare patients sent from the hospital to a nursing home boomerangs back within 30 days, often for potentially preventable conditions such as dehydration, infections and medication errors, federal records show. Such rehospitalizations occur 27 percent more frequently than for the Medicare population at large.

Nursing homes have been unintentionally rewarded by decades of colliding government payment policies, which gave both hospitals and nursing homes financial incentives for the transfers. That has left the most vulnerable patients often ping-ponging between institutions, wreaking havoc with patients' care.

"There's this saying in nursing homes, and it's really unfortunate: 'When in doubt, ship them out,' " said David Grabowski, a professor of health care policy at Harvard Medical School. "It's a short-run, cost-minimizing strategy, but it ends up costing the system and the individual a lot more."

In recent years, the government has begun to tackle the problem. In 2013, Medicare began fining hospitals for high readmission rates in an attempt to curtail premature discharges and to encourage hospitals to refer patients to nursing homes with good track records.

Starting this October, the government will address the other side of the equation, giving nursing homes bonuses or assessing penalties based on their Medicare rehospitalization rates. The goal is to accelerate early signs of progress: The rate of potentially avoidable readmissions dropped to 10.8 percent in 2016 from 12.4 percent in 2011, according to Congress' Medicare Payment Advisory Commission.

The revolving door is an unintended byproduct of long-standing payment policies. Medicare pays hospitals a set rate to care for a patient depending on the average time it takes to treat a typical patient with a given diagnosis. That means that hospitals effectively profit by earlier discharge and lose money by keeping patients longer, even though an elderly patient may require a few extra days.

But nursing homes have their own incentives to hospitalize patients. For one thing, keeping patients out of hospitals requires frequent examinations and speedy laboratory tests — all of which add costs to nursing homes.

Plus, most nursing home residents are covered by Medicaid, the state-federal program for the poor that is usually the lowest-paying form of insurance. If a nursing home sends a Medicaid resident to the hospital, she usually returns with up to 100 days covered by Medicare, which pays more. On top of all that, in some states, Medicaid pays a "bed-hold" fee when a patient is hospitalized.

None of this is good for the patients. Nursing home residents often return from the hospital more confused or with a new infection, said Dr. David Gifford, a senior vice president of quality and regulatory affairs at the American Health Care Association, a nursing home trade group.

"And they never quite get back to normal," he said.

Communication lapses between physicians and nursing homes is one recurring cause of rehospitalizations. Elaine Essa had been taking thyroid medication ever since that gland was removed when she was a teenager. Essa, 82, was living at a nursing home in Lancaster, Calif., in 2013 when a bout of pneumonia sent her to the hospital.

When she returned to the nursing home — now named Wellsprings Post-Acute Care Center — her doctor omitted a crucial instruction from her admission order: to resume the thyroid medication, according to a lawsuit filed by her family. The nursing home telephoned Essa's doctor to order the medication, but he never called them back, the suit said.

Without the medication, Essa's appetite diminished, her weight increased and her energy vanished — all indications of a thyroid imbalance, said the family's attorney, Ben Yeroushalmi, discussing the lawsuit. Her doctors from Garrison Family Medical Group never visited her, sending instead their nurse practitioner. He, like the nursing home employees, did not grasp the cause of her decline, although her thyroid condition was prominently noted in her medical records, the lawsuit said.

Three months after her return from the hospital, "she looked like a wet washcloth. She had no color in her face," said Donna Jo Duncan, a daughter, in a deposition. Duncan said she demanded the home's nurses check her mother's blood pressure. When they did, a supervisor ran over and said, "Call an ambulance right away," Duncan said in the deposition.

At the hospital, a physician said tests showed "zero" thyroid hormone levels, Deborah Ann Favorite, a daughter, recalled in an interview. She testified in her deposition that the doctor told her, "I can't believe that this woman is still alive."

Essa died the next month. The nursing home and the medical practice settled the case for confidential amounts. Cynthia Schein, an attorney for the home, declined to discuss the case beyond saying it was "settled to everyone's satisfaction." The suit is still ongoing against one other doctor, who did not respond to requests for comment.

Out of the nation's 15,630 nursing homes, one-fifth send 25 percent or more of their patients back to the hospital, according to a Kaiser Health News analysis of data on Medicare's Nursing Home Compare website. On the other end of the spectrum, the fifth of homes with the lowest readmission rates return fewer than 17 percent of residents to the hospital.

Many health policy experts say that spread shows how much improvement is possible. But patient advocates fear the campaign against hospitalizing nursing home patients may backfire, especially when Medicare begins linking readmission rates to its payments.

"We're always worried the bad nursing homes are going to get the message 'Don't send anyone to the hospital,' " said Tony Chicotel, a staff attorney at California Advocates for Nursing Home Reform, a nonprofit based in San Francisco.

Richmond Pines, where Sandra Snipes stayed, has a higher than average rehospitalization rate of 25 percent, according to federal records. But the family's lawyer, Kyle Nutt, said the lawsuit claimed the nurses initially resisted sending Snipes back, insisting she was "just drowsy."

After Snipes was rehospitalized, her blood thinner was discontinued, her hip was reset, and she was discharged to a different nursing home, according to the family's lawsuit. But her hospital trips were not over: When she showed signs of recurrent infection, the second home sent her to yet another hospital, the lawsuit alleged.

Ultimately, the lawsuit claimed that doctors removed her prosthetic hip and more than a liter of infected blood clots and tissues. Nutt said if Richmond Pines' nurses had "caught the over-administration of the blood thinner right off the bat, we don't think any of this would have happened."

Snipes returned home but was never able to walk again, according to the lawsuit. Her husband, William, cared for her until she died in 2015, her daughter, Clark, said.

"She didn't want to go back into the nursing home," Clark said. "She was terrified."