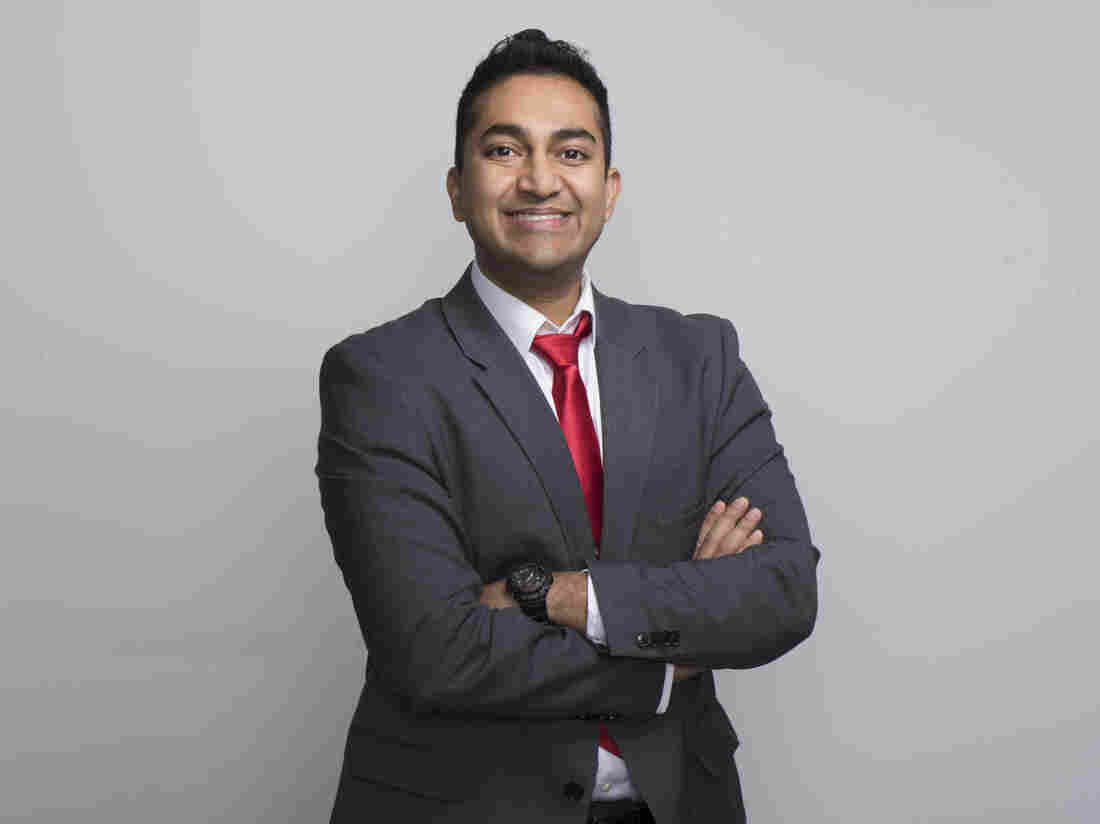 Dr. Vinay Prasad is 35 and an assistant professor of medicine at Oregon Health and Science University in Portland, where he researches health policy, the high cost of drugs and evidence-based medicine. He has more than 21,000 followers on Twitter. Marvin Joseph/The Washington Post via Getty Images hide caption 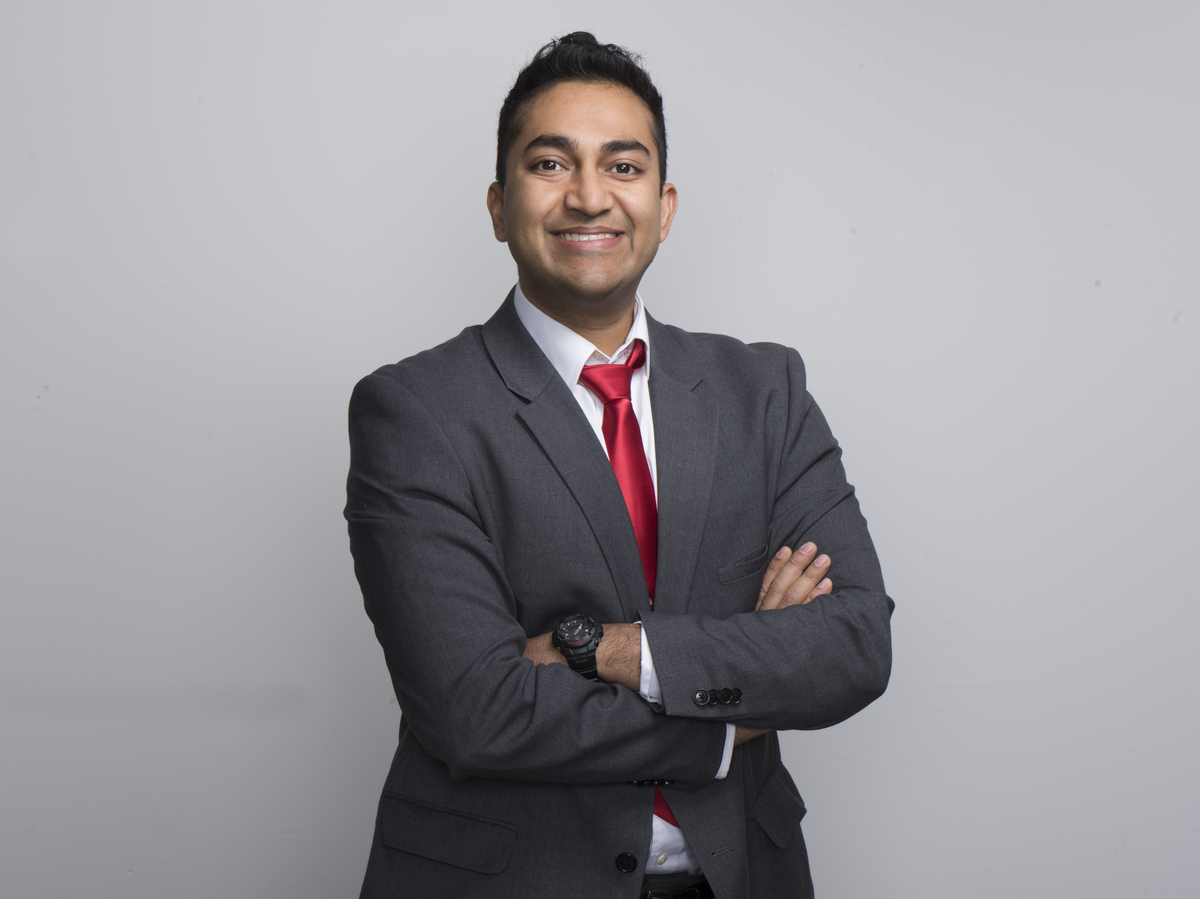 Dr. Vinay Prasad is 35 and an assistant professor of medicine at Oregon Health and Science University in Portland, where he researches health policy, the high cost of drugs and evidence-based medicine. He has more than 21,000 followers on Twitter.

New advances in medicine also tend to come with a hefty dose of hype. Yes, some new cancer drugs in the hot field of precision medicine, which takes into account variables for individual patients, have worked remarkably well for some patients. But while many patients clamor for them, they aren't currently effective for the vast majority of cancers.

This stubborn fact has become a sticking point for an equally stubborn cancer doctor. At just 35 years old, Dr. Vinay Prasad has made a name for himself by calling out the hype surrounding precision medicine and confronting other examples of hype in his field.

Prasad is a hematologist-oncologist and an assistant professor of medicine at Oregon Health and Science University in Portland. Some have called him a professional troublemaker, a gadfly or a provocateur as he tweets to his 20,000-plus followers. He has sent nearly 30,000 tweets out to the Twitterverse, putting him within hailing distance of President Trump, at least in terms of output.

He is also a prolific author of scientific papers, as well as a book, that call out uncomfortable facts about the science of cancer and the business and regulation of medical treatments.

Giant cancer conventions are ripe targets for Prasad's sometimes prickly observations. We caught up with him in early June at the American Society of Clinical Oncology meeting, which drew about 40,000 attendees to Chicago's sprawling McCormick Place convention center.

Prasad's main event at the conference was to be a debate/discussion about whether precision cancer treatment is "ready for prime time." But that debate really started as soon as Prasad stepped into the convention center.

Another young cancer researcher — who feared having a public spat with Prasad and asked not to be identified — ran into Prasad while he was walking over to view the scientific posters. After thanking Prasad for raising some important issues, she chided him for his tone.

"I think both sides are too emotional," she told him, "and I think the truth is something in the middle."

He aggressively defended his position, often not letting her finish her sentences. Genetic tests now commonly given to cancer patients only identify clear treatments about 8 percent of the time, he argued, citing one of his research papers — and only 5 percent show even a temporary response to the treatment.

Cancer drugs that modify the immune system, such as checkpoint inhibitors, aren't, strictly speaking, precision medicine, since they don't depend on the results of the genome tests. But they also only work well in a minority of patients.

He is not arguing that precision medications are all useless, as his critics sometimes seem to imply.

"I use those drugs," he says. "There are some good drugs. No one said there are no good drugs."

The problem, in his eyes, is that the field has gotten so enthusiastic about these drugs that doctors aren't waiting for actual science to distinguish between the conditions for which they are useful and for which they are, instead, a very expensive, wasted effort.

"A lot of people want to push it to the treatment side," he says. "They want to get Medicare to pay for it," even before the drug is approved for that specific purpose.

Prasad says drug companies are happy not to shoulder the costs of research when doctors will prescribe their medicine anyway. "And that's the root of what bothers me about this."

Indeed, the high costs of these unproven — and often failed — treatments fall to people who buy health insurance and who pay taxes. It is, in essence, a massive uncontrolled experiment, and nobody is collecting the data most of the time to find out what might be useful.

Often, doctors run genetic tests on tumors to see if they carry a mutation that will respond to a targeted drug. More than 90 percent of the time, there is no match.

But doctors are increasingly giving these targeted drugs anyway to patients who have the mutation in a type of tumor that has not been shown to respond to the drug. While that sounds rational, it often doesn't work in patients.

One study to explore these nonapproved uses is the National Cancer Institute's Molecular Analysis for Therapy Choice trial. At the ASCO meeting, scientists reported on early results from about 150 patients who were matched to drugs based on their tumor's genetic fingerprint, rather than the type of tumor. The results were disappointing. The tumors responded poorly or not at all to the targeted drugs.

Prasad says that when he was in medical school, he assumed he would just learn how to treat cancer and spend his career doing that. But then he discovered how much of medical practice was based on traditions rather than on actual science.

"Even the most respected, charismatic and thoughtful experts often are incorrect," he says. That realization drew Prasad to consider a career beyond just treating patients.

"I found it harder just to observe things that troubled me and not study them," he says. "And at some point, I made the conscious decision that if it troubles me enough, I want to look at it and study it. Maybe somebody else will carry the torch and actually fix that problem someday."

Prasad got on this path after he graduated from the University of Chicago Pritzker School of Medicine. (He also has a master's degree in public health from the Johns Hopkins University.) He really launched his research career while a fellow at the National Institutes of Health.

His prolific research output is supported in part by funding from Texas billionaires Laura and John Arnold. Their foundation has a soft spot for supporting scientists who are calling out shortcomings in scientific research and suggesting ways to improve it.

Prasad's skeptical approach was on display at the ASCO meeting. As the crowd was gathering, he fired off a tweet encouraging the attendees to play "ASCO Bingo." He had filled a five-by-five grid with words such as "unprecedented," "breakthrough," "game changer" and "transformative" and invited his colleagues to listen for these words during the scientific presentations.

As thousands of doctors filed into a massive meeting room to hear the plenary talk, random tweets about the meeting flashed up on the screens, including Prasad's ASCO Bingo card. "I guess it has almost 100 retweets now," he said as the tweet flashed by.

He actually published a scientific paper in 2016 about the overuse of superlatives in presentations and news coverage.

"What really got me," he says, "was [that for] 14 percent of the drugs, the superlative was used based only on mouse or laboratory results, and they'd never given it to a human being!"

Finally, it was time for Prasad's presentation at the meeting — an informal debate of the value of precision medicine in cancer treatment. His opponent, Jeremy Warner, had suggested the discussion, which was limited to an audience of 55 to allow a more intimate conversation than is typical at the vast conference.

"So the first thing I have to say is, I'm the underdog," said Warner, a cancer doctor and researcher at Vanderbilt University. For starters, he admitted that Prasad has 40 times more Twitter followers, many of them avid supporters.

The back-and-forth turned out to be surprisingly friendly, with many points of agreement. Warner agreed that in an ideal world there would be a lot more scientific studies to figure out which drugs work in which circumstances. "But

"just saying that somebody should be on a clinical trial — I mean it sounds easy, but it's actually not easy at all."

"I enjoy his remarks very much," he says afterward. "I mean, he's a bit of a gadfly. He's a bit of a provocateur. But frankly, he's taking a very hard and objective look at a very complex area and ... he's saying what's behind the curtain. 'Let's celebrate what really works, let's look hard at what doesn't, and let's try to develop the evidence that we need to make important decisions for patients.' "

"I think it's unfortunate that I'm thought of as a professional troublemaker," Prasad says. "We really try to find those instances where the evidence and the narrative are divergent and try to ask what we can do to bring those two closer together."

Prasad says he can't tell at this point whether he is building a strong reputation for himself or potentially damaging his career.

"I don't want to be the person to be doing all this work," he says. "I wish there were senior people doing this work."

But by and large, they aren't.

It bothers him, he says, when his colleagues think he is simply being cynical or contrary. The ultimate point is to call out the problems in this critical field so everyone does science better, he says. And, in the end, the rewards of that will flow to the patients.