Accessibility links
After Rescuing Victims Of Gun Violence, First Responders Face Their Own Trauma : Shots - Health News Some firefighters, EMTS and police officers say recent mass shootings have brought to the surface their own trauma, buried over years on the job. Many find it hard to open up and seek help. 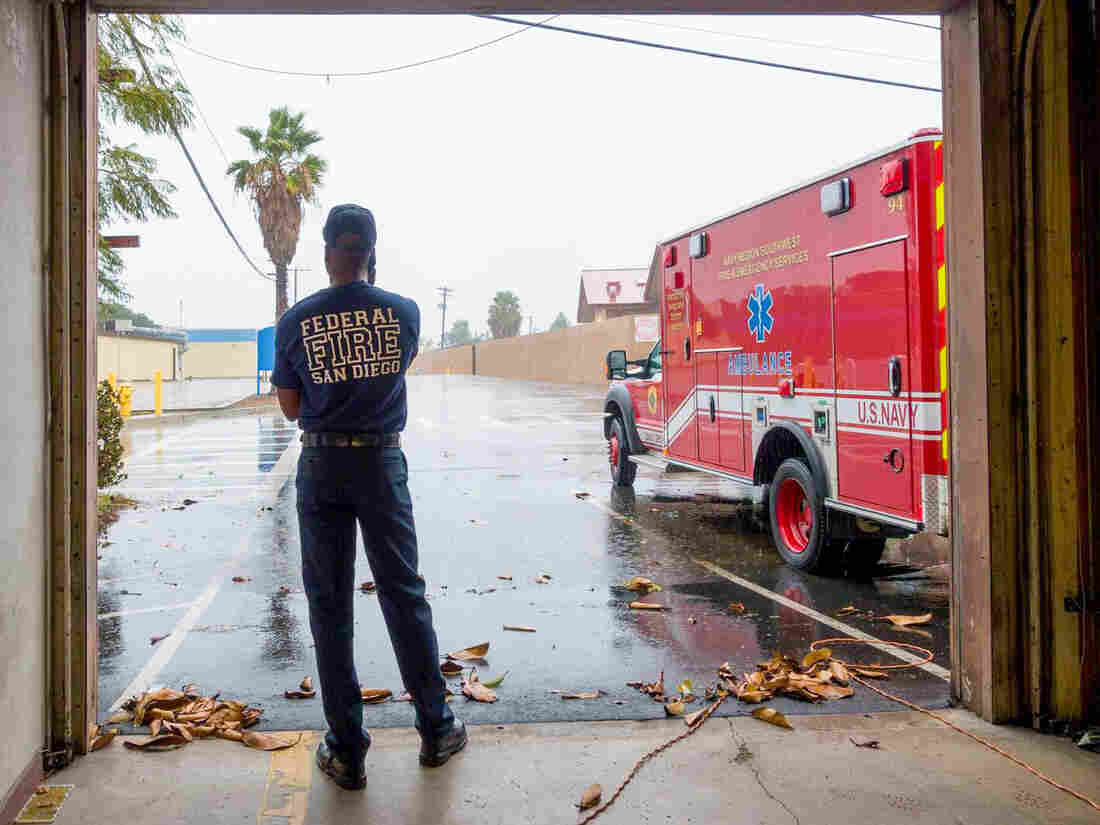 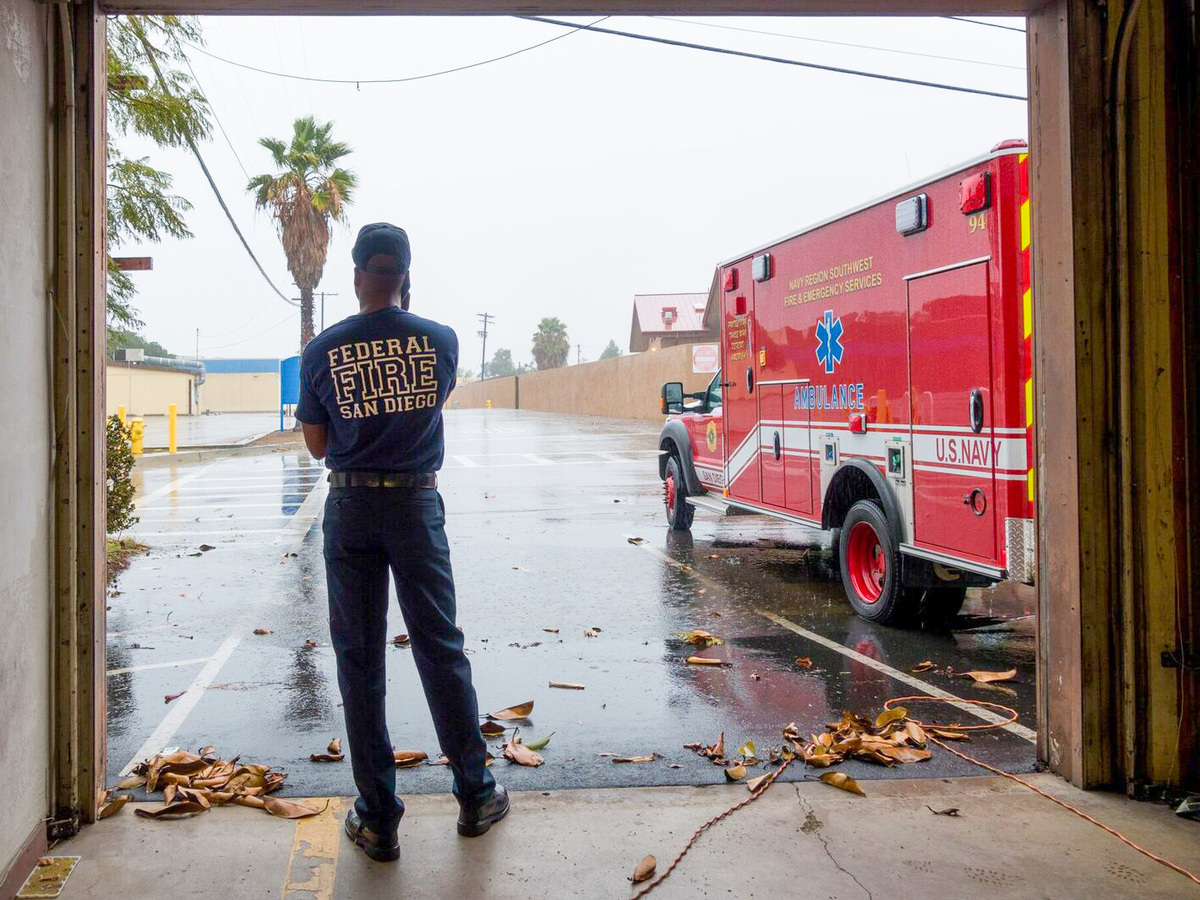 Some firefighters, paramedics and police officers say the tragedies they respond to haunt them, leading to depression, job burnout, substance abuse, and more.

The night a gunman fired into a crowd of 22,000 people at the country music festival in Las Vegas in 2017, nursing supervisor Antoinette Mullan at University Medical Center was focused on one thing: saving lives.

She recalls dead bodies on gurneys across the triage floor, a trauma bay full of victims. But "in that moment, we're not aware of anything else but taking care of what's in front of us," Mullan says.

She calls that event, "the most horrific evening of my life." But in a career spanning 30 years, Mullan has experienced plenty of other tragic incidents in which she witnessed suffering and death.

She says she has tried to work through these painful memories, mostly on her own.

"I can tell you that after 30 years, I still have emotional breakdowns and I never know when it's going to hit me," she says.

In 2017, there were 346 mass shootings nationwide, including the Las Vegas massacre — one of the deadliest in U.S. history — according to Gun Violence Archive, a nonprofit organization that tracks the country's gun-related deaths.

The group, which defines mass shootings as ones in which four or more people are killed or injured, has identified 159 so far this year, through July 3.

Just last week, a gunman burst into the newsroom of the Capital Gazette in Annapolis, Md., killing five journalists and injuring two others.

Many of the men and women who respond to these tragedies have become heroes and victims at once. Some firefighters, EMTs, police and others say the scale, sadness and sometimes sheer gruesomeness of their experiences haunt them. 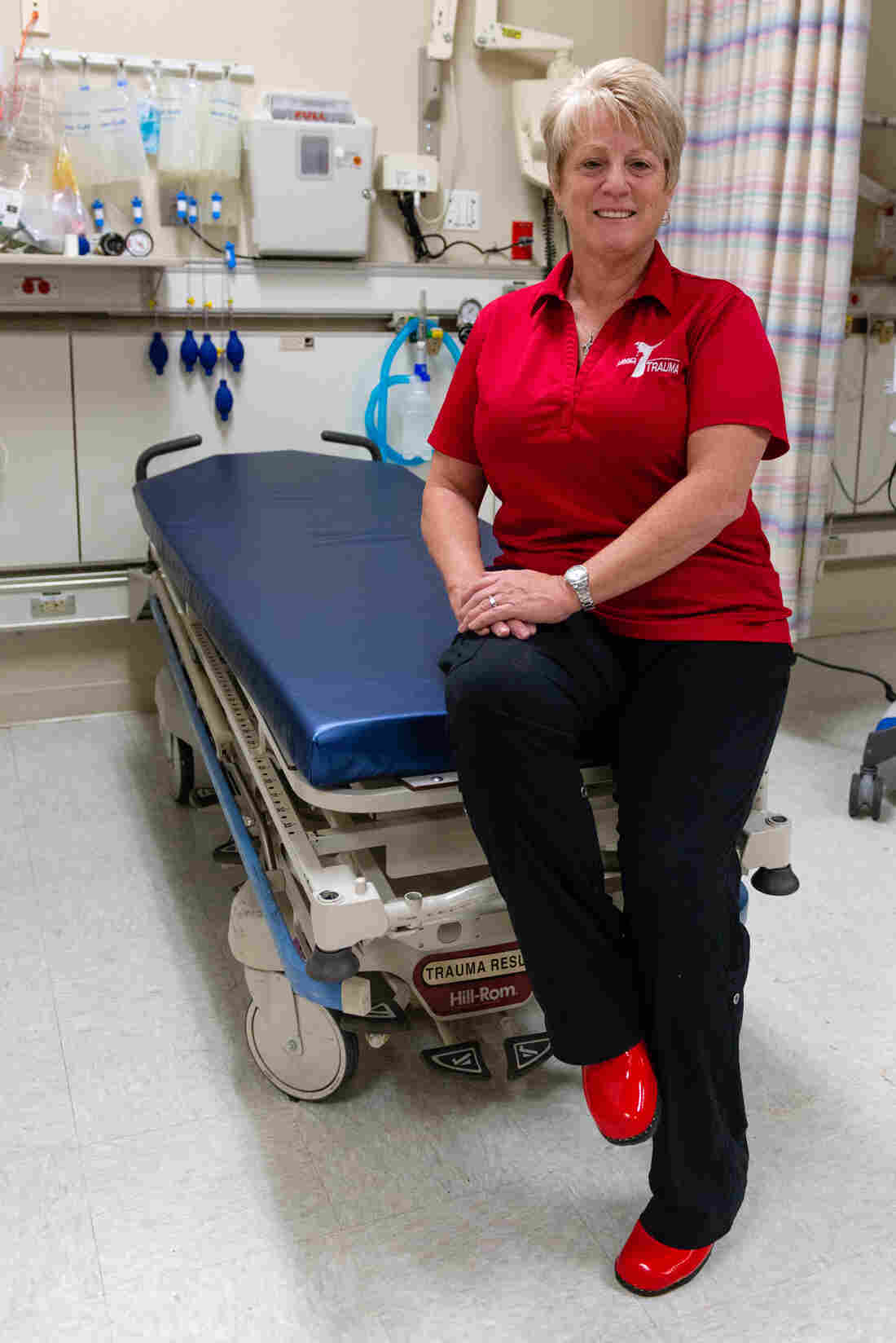 Nursing supervisor Antoinette Mullan recalls dead bodies being wheeled in on gurneys across the triage floor and a trauma bay full of victims after a gunman fired into a crowd of 22,000 people at the country music festival in Las Vegas. Heidi de Marco/Kaiser Health News hide caption

Many, like Mullan, are stoic, forgoing counseling even when it is offered.

"I don't have this sense that I need to go and speak to someone," says Mullan. "Maybe I do, and I just don't know it."

Research shows that emergency first responders suffer from the accumulation of stress and trauma. First responders report feeling depression, job burnout, substance abuse, troubled relationships — even suicide. Many studies have found elevated rates of post-traumatic stress disorder among nurses, firefighters and paramedics. A 2016 report by the International Association of Fire Fighters found that firefighters and paramedics are exhibiting levels of PTSD similar to that of combat veterans.

'They Were Ready To Go': Capital Gazette Publisher On Newsroom's Response To Tragedy

Yet there's a dearth of research on treatment, insufficient preparation by employers for traumatic events and significant stigma associated with seeking care for the emotional fallout of those events, says Jeff Dill, a counselor and founder of the Firefighter Behavioral Health Alliance in Anthem, Ariz.

"When we have these national disasters or have a guy take a truck and run people over ... those are added stressors we aren't prepared for," says Dill, who is a former firefighter.

Dill says the emotional toll of these large-scale horrific events is magnified because everyone is talking about them. They are inescapable and become emotional "trigger points."

But a slow change in culture is also catching on, Dill says.

Dill travels the country teaching mental health awareness workshops for firefighters and other emergency personnel. Some employers are working on developing greater peer support, he says, but it often comes after the fact rather than proactively.

"We met a lot of resistance early on because of the [stoic] culture," says Dill.

Now, he says, emergency workers are starting to talk more openly about their PTSD and depression from the trauma they see at work. More first responders are reaching out to him and attending his workshops, he says.

"When I started in the fire service way back when, we didn't have to worry about those things," Dill says. But now, "out of those horrific incidents comes the conversation. They're talking about it instead of keeping it buried deep inside." 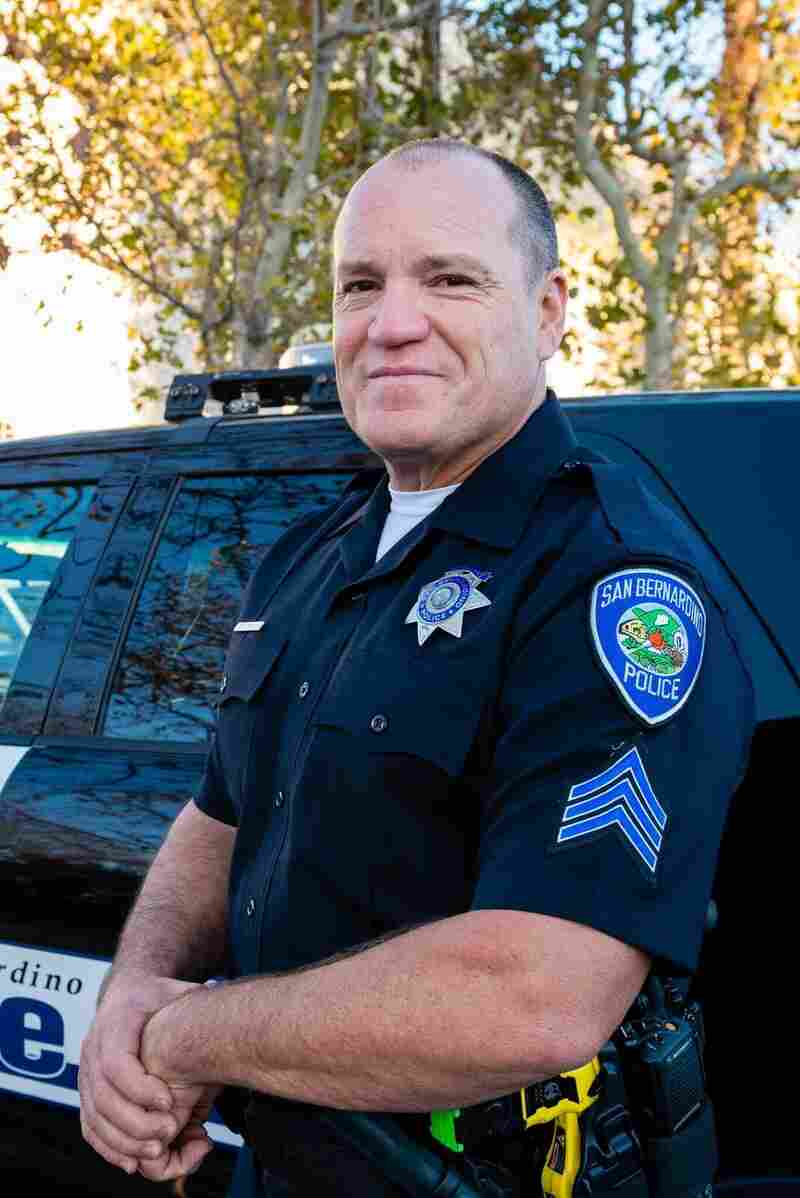 Gary Schuelke, a police watch commander, raced to the scene of a holiday party in San Bernardino, Calif., where he and his fellow officers faced gunfire from terrorists. Heidi de Marco/Kaiser Health News hide caption

In 2015, Gary Schuelke, a police watch commander, raced to the scene of a holiday party in San Bernardino, Calif., where he and his fellow officers faced a fusillade of gunfire from a pair of homegrown terrorists.

He'd seen a lot on the force over the years, but this call was different — and not just because of the numerous casualties. His son, a young police officer, was there with him.

Schuelke and his son, Ryan, chased the assailants' car as the bullets whizzed by. It was the younger Schuelke's first time exchanging fire with suspects.

Afterward, when both were safe, "I asked him, 'You doing OK?' " Gary Schuelke recalls. "If you're not, it's cool. You can talk to me about it. He said, 'I'm good, Dad. I'm very happy to be part of taking down the bad guys.'"

The elder Schuelke says he recognized Ryan's attitude. It reminded him of his own when he was younger. Ryan was "just like I was when I was in my 20s ... chasing bad guys and making arrests," he says.

He recalls how he had decided early in his career to try to "compartmentalize" his work experiences so they wouldn't affect his personal life.

Generally, no one focused on officers' mental health back then, he says, but experience has taught him how important it is to do just that.

Since then, he and some of his older colleagues have become more open to seeking help, he says. But some of the younger officers, like his son, still try to be stoic.

After the 2014 terrorist attack, which left 14 dead, his department quickly set up a "debriefing" meeting for all the officers involved, where they talked about the event as a group.

"I made it a point in that meeting that I was going to talk about the fact that I was scared," says Schuelke. "Not try to be macho in there and act like nothing bothered me about it."

This story was produced by Kaiser Health News (KHN), which publishes California Healthline, an editorially independent service of the California Health Care Foundation. KHN is not affiliated with Kaiser Permanente.