Accessibility links
Permethrin And Cats: Be Cautious To Avoid Side Effects From Human Use : Shots - Health News Cat lovers were very concerned about our story on permethrin. How risky is the pesticide for Kitty? By minimizing their pet's exposure, cat owners can use the chemical safely, veterinarians say.

If You Spray Your Clothes With Permethrin, Be Careful Around The Cat

If You Spray Your Clothes With Permethrin, Be Careful Around The Cat 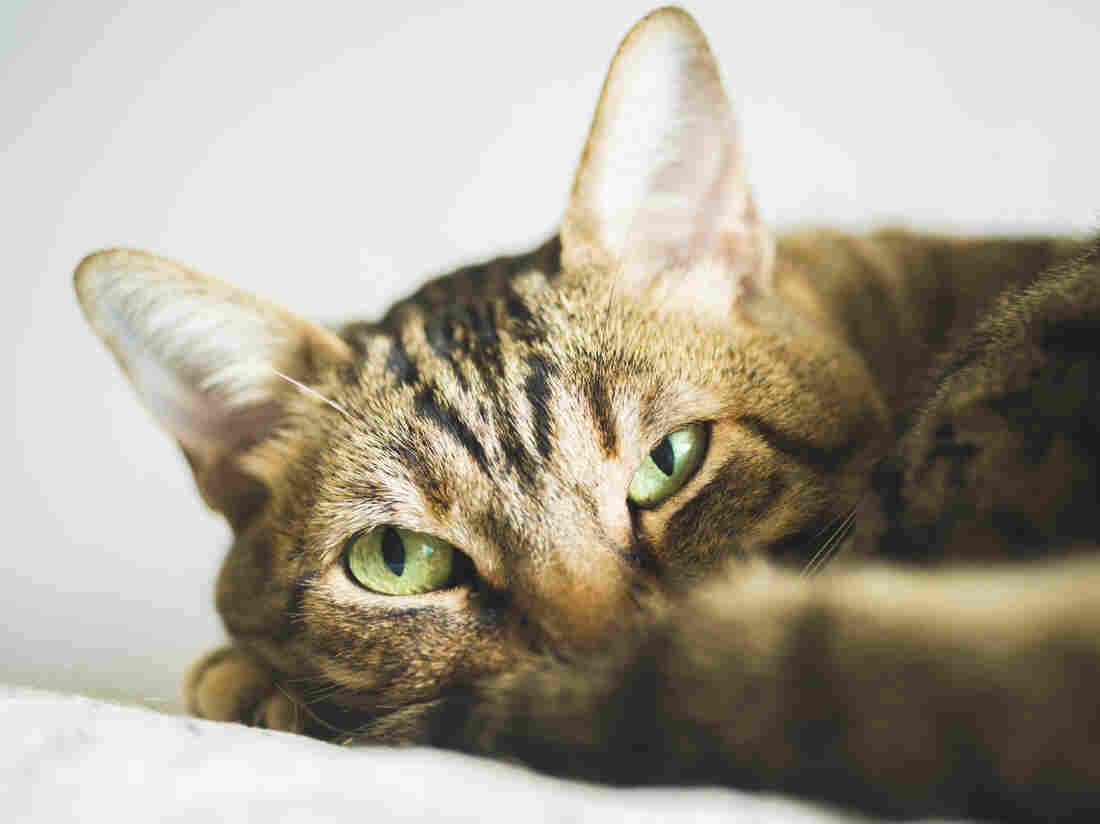 "Don't come near me until the permethrin on your clothes has dried." Manuel Breva Colmeiro/Getty Images hide caption 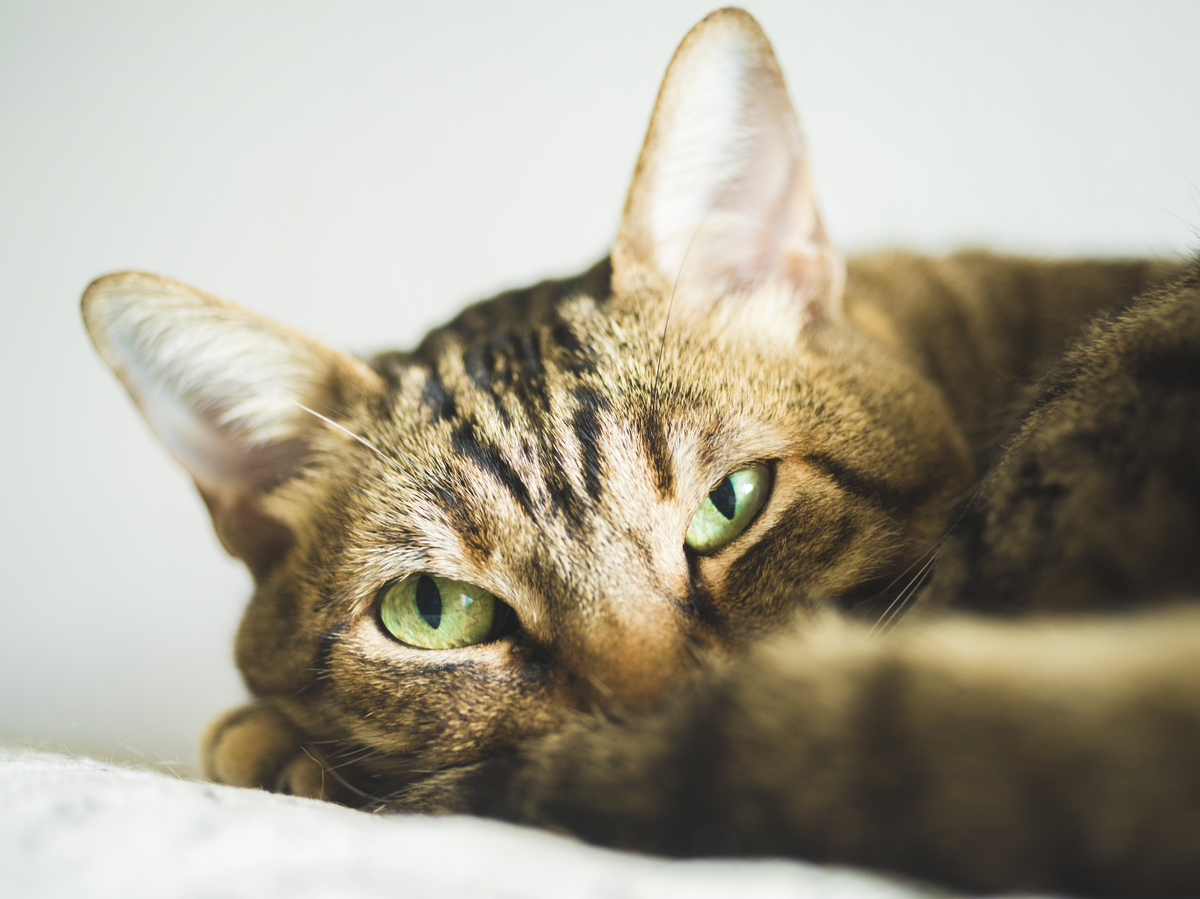 "Don't come near me until the permethrin on your clothes has dried."

If there's one thing we're grateful for on Shots, it's our passionate, engaged audience. Our stories often prompt a lively response from readers and people who hear us on the radio. This was definitely the case with Monday's look at the use of permethrin-treated clothing to prevent tick bites, which can cause a lot of nasty diseases.

Permethrin is a synthetic pesticide that's similar to natural compounds found in chrysanthemums. When you spray permethrin on your clothes, a study published in May found, it incapacitates ticks quickly, rendering them unable to bite.

It didn't take long for emails to come flooding in. Most were from concerned cat owners.

"Permethrin is very toxic to cats," wrote Charles Fischer, who lives in Chapel Hill, N.C. "Suggesting that people spray their garments with permethrin to prevent tick bites without a cat disclaimer is very dangerous."

Others agreed. "NPR has always been a wonderful source of great information," wrote Colleen Scott-Jackson of Jacksonville, N.C. "I would hate to see any cats harmed because an important piece of information is left out of the story."

To Repel Ticks, Try Spraying Your Clothes With A Pesticide That Mimics Mums

We certainly didn't want any cat catastrophes, so we decided to look into this a little further. Here's what we found.

Cats are more sensitive to permethrin than other mammals, but cat lovers can still use the insecticide as long they're careful about it, veterinarians say.

"It's the dose that makes the poison," says Dr. Charlotte Means, director of toxicology at the ASPCA Animal Poison Control Center.

The biggest problem for cats is when they are exposed to highly concentrated permethrin products meant for use in dogs, she says. These products may be 45 percent permethrin or higher.

"Some cats will be so sensitive that even just casual contact with a dog that's been treated will be enough to cause clinical signs, including tremors, seizures and in the worst-case scenario — death," she says.

But the concentration of permethrin in household sprays is much, much lower – typically less than 1 percent. And with concentrations of 5 percent or less, Means says, there are rarely problems.

"Of course you can always get an individual [cat] who is more sensitive, but for most animals there are going to be minimal clinical signs," she says.

There are some simple rules that can help minimize the risk.

"Don't put the dog product on the cat," says Dr. Lisa Murphy, associate professor of toxicology at the University of Pennsylvania School of Veterinary Medicine. She agrees that the most dangerous scenario for cats is an accidental exposure to a highly concentrated product meant for dogs.

"Cats seem to be deficient in one of the primary mechanisms for metabolizing permethrin," she says, which is why they are more susceptible to the chemical. If an animal "isn't able to normally metabolize it, break it down and excrete it, it can build up and be more likely to cause problems."

If you're concerned your cat may have been exposed to permethrin, the most common symptoms are skin irritations — redness, itching and other signs of discomfort.

"The animal may be frantic if they have something uncomfortable on their skin," Murphy says. "They may be scratching, digging and rolling because it's uncomfortable."

These skin reactions are usually easily treated by washing the affected area with mild, liquid dishwashing detergent. If the cat fights back, you can take it to the vet for a bath.

Other reactions to watch for are drooling or pawing at the mouth. "Cats seem particularly sensitive to bad tastes in their mouths," Murphy says. This can be helped by gently rinsing out the mouth, or offering the cat some water or milk to take away the bad taste.

But if you see signs of neurological problems — tremors, twitching or shaking — it's time to take the cat to the vet right away.

Even then, if there aren't any complications, "the prognosis for a full recovery is excellent," Murphy says.

"The way I look at it, as a veterinarian, is it's all about making choices," Murphy says. Ticks, fleas, lice and mosquitoes do carry lots of diseases that permethrin and other insecticides can help prevent, she says: "All sorts of things that we wouldn't wish on ourselves or our pets."

So the bottom line when it comes to permethrin and tick-bite prevention is: If you have a cat, be extra careful.

If you're spraying your clothes, do it somewhere the cat doesn't have access to. And let the clothes dry thoroughly before you and your cat reunite.

"If you are spraying a 1 percent concentration on clothing and it dries, it's unlikely that you'll see any problems with the cat," Means says.

To be extra cautious, don't leave permethrin-treated clothing near where your cat sleeps. And make sure to change clothes after you wear them outside, so the cat can jump in your lap without you having to worry, she says.

And it may seem obvious, but if you're using a permethrin soak for your clothes, make sure the cat doesn't drink from the bucket.

Finally, read the label for the permethrin product you're using. Check the concentration and use only as instructed. And before treating any animal directly with any insecticide, check with your vet first.