Accessibility links
Why Are Some Women At Risk Of Premature Birth? : Shots - Health News Preterm birth, a leading cause of death in infants, remains stubbornly hard to prevent. Researchers are on the hunt for a better understanding of what causes it and better ways to diagnose risk. 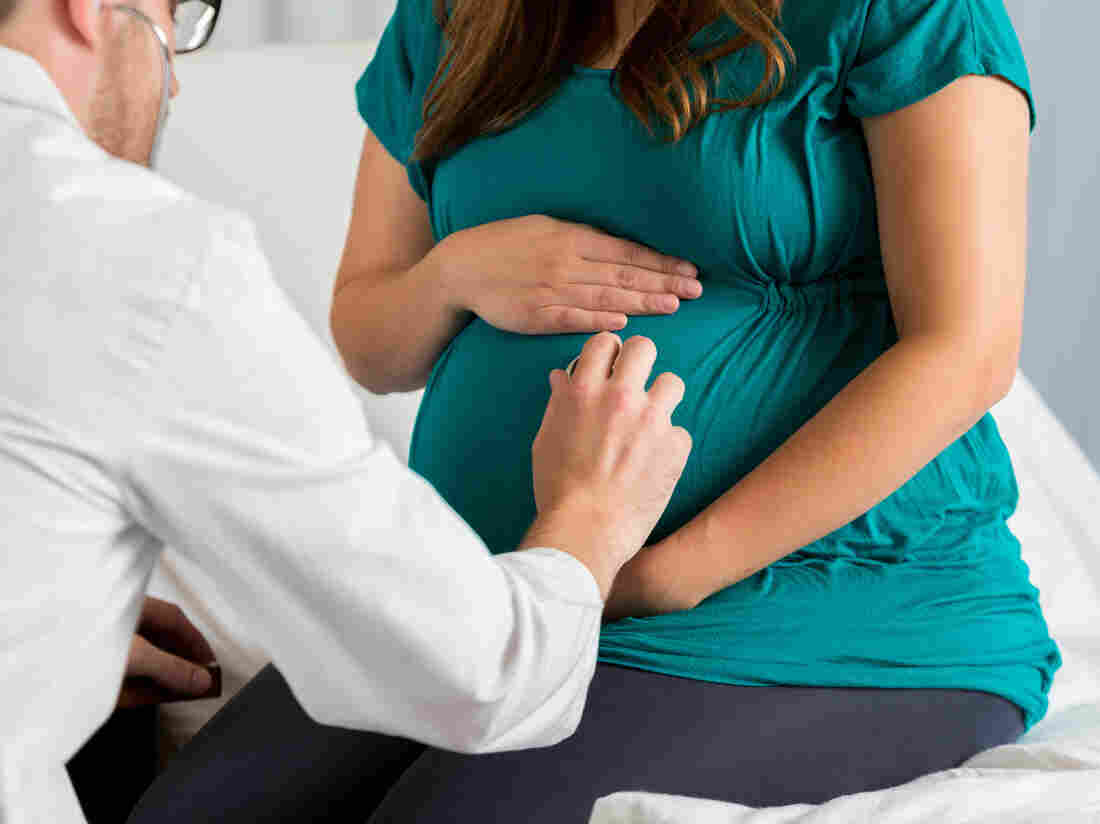 Scientists are in the early stages of developing new tests that could predict accurately if a woman is at risk of delivering her baby early. Steve Debenport/Getty Images hide caption 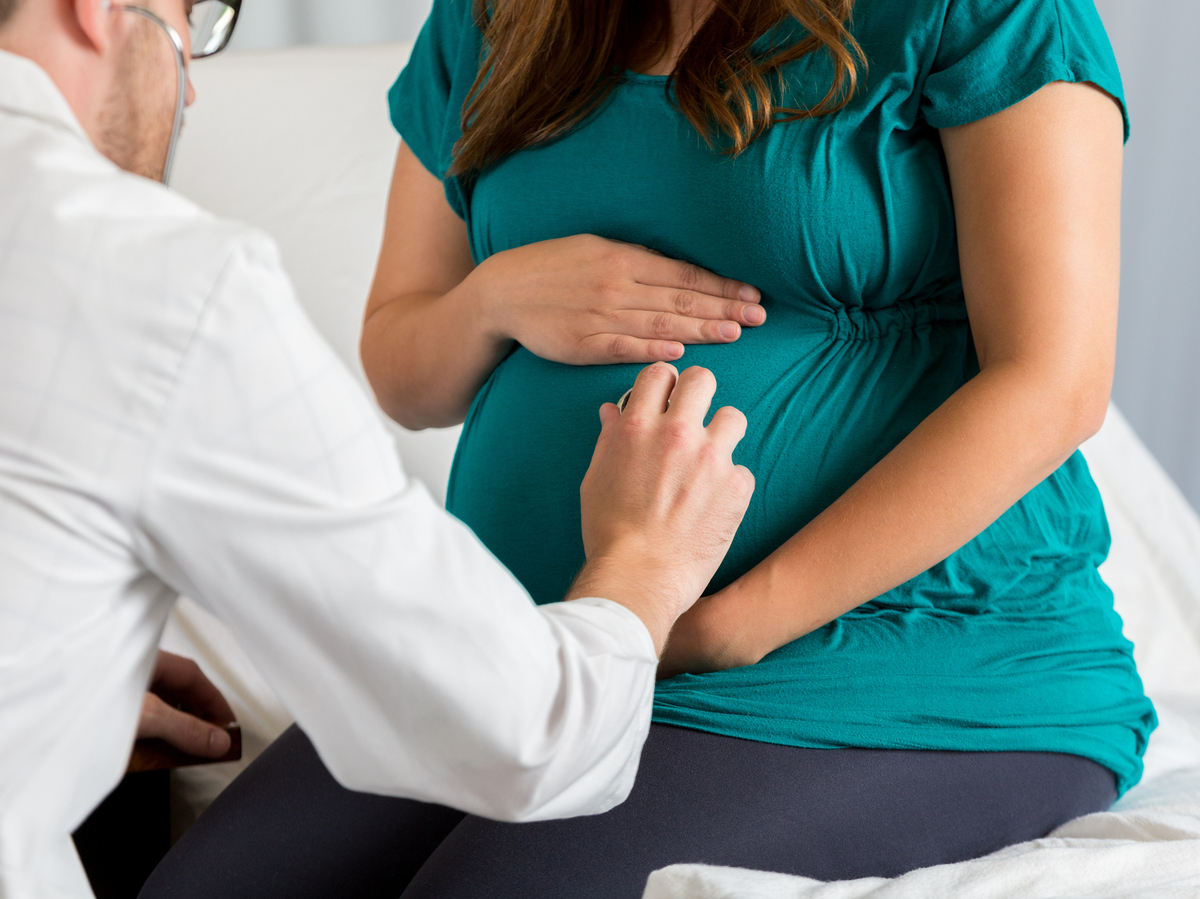 Scientists are in the early stages of developing new tests that could predict accurately if a woman is at risk of delivering her baby early.

In 1998, 25 weeks into her pregnancy, Sara Arey's cervix dilated and her amniotic sac started to descend into the birth canal. She was rushed to a hospital an hour and a half away from her home near Hickory, N.C., where she stayed for more than a week before her baby was born via emergency C-section. The baby, a girl, died 12 hours later in the hospital.

Arey had already had two prior miscarriages and one preterm birth in 1994. Had she been able to take a test for her risk of preterm birth, she says that she would have. She would have liked to have known her risk as early as possible, she says.

"When you're pregnant, you're at the most vulnerable point of your life," she says. "You feel this joy of this being, but also enormous responsibility."

Unfortunately for mothers in her situation, there's currently no reliable way of predicting preterm birth risk. Yet nearly 1 out of 10 babies born in the U.S. were born premature (before 37 weeks) in 2016, and, according to the most recent data from the CDC, that rate rose slightly between 2014 and 2016 after a decade of decline.

Preterm birth comes with significant health risks for the baby and is a leading cause of infant mortality worldwide.

If doctors had a reliable test that would predict preterm births, that would be the first step in developing interventions that could help prevent them.

Two teams of researchers recently published studies, one in Science and another in the Journal of Perinatology, showing promising results for two different predictive tests for preterm birth. Though more research is needed, both approaches suggest a path forward to solving a problem that has proved elusive.

"This is something that has plagued humanity for as long as we've been able to observe," says Gary Shaw, an epidemiologist at Stanford University and a co-author on both studies. He's part of a research group at Stanford that includes scientists from several disciplines working together to investigate preterm birth.

These new studies could be important, says Dr. Molly Stout, an assistant professor of obstetrics and gynecology at Washington University School of Medicine in St. Louis, who was not involved with the research.

"Every piece of the puzzle moves the field forward," she says. "You can't make out the whole picture until you have lots of different pieces laid out together, and I think that analogy is true for preterm birth."

The researchers who published the study in Science developed a test for preterm birth risk that works by analyzing cell-free RNA — from fetal and placental cells — found circulating in the mothers' blood. RNA carries instructions from DNA controlling the synthesis of proteins.

"These are the messages that basically create the changes in our biology on a regular basis," says Dr. David Stevenson, a professor of pediatrics at Stanford and a co-author of the study. "During pregnancy, there is a pattern of messages that appear in the circulation over time."

He says observing these messages allow scientists "to be witness to a conversation between the mother, the fetus and the placenta." They are like "snapshots," he says, that allow researchers to see when a pregnancy is evolving normally, or when something is disrupted. Observing these messages allowed the researchers to estimate whether a woman was going to have her baby early.

In the study, the test predicted with 75-80 percent accuracy whether a woman who was at risk of a preterm birth would in fact deliver early.

Stevenson says further research on cell-free RNA could lead to identifying genes associated with preterm birth, and to a better understanding of the biological pathways which, if activated too early, lead to preterm birth.

This he says, could "allow us to identify new targets for intervention."

It was a small pilot study, and only included women at high risk of preterm birth, so the researchers plan to study the test on larger groups of women, including greater demographic diversity and a wider range of risk levels.

Heather Frey, a maternal fetal medicine doctor at Ohio State University's Wexner Medical Center, who wasn't involved in the study, says results need to be "replicated in larger clinical trials before the test can be used clinically."

"I'm cautiously optimistic about this type of technology," she says. "People have been studying preterm birth prediction and prevention for decades, and we really, unfortunately, haven't made much progress."

The second new approach to testing preterm birth risk was published in the Journal of Perinatology. A group of researchers measured 25 biomarkers related to inflammatory response and placental growth — and also considered maternal age and poverty status — to identify women at risk of preterm birth.

This test could work on women with and without pre-eclampsia, a complication of pregnancy that includes high blood pressure and which would result in induced preterm birth.

By measuring levels of these biomarkers in pregnant women's serum, the watery part of the blood, they were able to predict preterm birth accurately in roughly 80 percent of the women in the study.

This test can be done very early in pregnancy, as early as 15 weeks, around the same time as routine prenatal screenings.

Laura Jelliffe-Pawlowski, a professor of epidemiology at the University of California, San Francisco, and a co-author of the study, says their goal in the test was to cover both types of preterm birth, spontaneous or induced. And they wanted to make it affordable by using a simple type of lab-testing technology so that it could be available for at-risk women, who are often of low-income status.

"We want to see the best test possible," Jelliffe-Pawlowski says. "It doesn't have to be our test — we just haven't seen anything out there on the market that's low cost that might really lead us to detect preterm birth in the women that need it most."

Before they can bring the test to market, they will need to conduct a larger, clinical trial. Jelliffe-Pawlowski says they are in the works of securing funding, and will hopefully launch their next trial in 2019.

The study is "impressive," says Washington University's Dr. Molly Stout, but it may be some time until the test can be used on patients.

"Until we can be more confident in what we would tell a patient, then this will probably move the research field forward, but not the actual live patient management field forward yet," she says.

Could prediction lead to prevention?

Both new approaches go beyond predicting preterm birth risk. They offer theories about why a woman might deliver early, and could eventually lead to targeted interventions.

This distinguishes the new research from the few tests that are currently available for predicting preterm birth.

Existing methods include measuring cervical length and fetal fibronectin, a protein that is believed to keep the amniotic sac attached to the lining of the uterus. In high-risk cases, these tests are run about 14 days before the expected birth date.

There is also a test on the market that predicts risk for spontaneous birth, by measuring a protein in the blood. It's expensive, at around $900, and leaves out women with pre-eclampsia, about a third of preterm births.

For Heather Frey from Ohio State University, the major issue with testing for preterm risk is the "what next" question.

"There's still a lot of work to be done to figure out, 'OK when you identify an at-risk woman using a blood test, what's the next step?' " she says. "It's great you can identify them, but what can you do to prevent a premature birth, or can you at that stage?"

Few interventions that exist now will help women who are at risk. But a reliable test could help narrow down who is at the highest risk, says Dr. Larry Rand, the perinatal director at the University of California, San Francisco Fetal Treatment Center and a co-author of the Journal of Perinatology study. This could allow researchers to focus their future research efforts on the most affected group.

"We do have some interventions that are available that are specifically proven in women who have had a preterm birth before," he says.

Something as simple as taking low doses of aspirin during pregnancy could help keep inflammatory responses under control, Rand says.

"But we don't know, right now, who is at risk," he says. "Doing something for the whole population is really difficult."

Rand says if clinicians had a way of identifying the subset of patients at the highest risk they could warn those future mothers and advise them what to watch out for during their pregnancies.

UCSF's Jelliffe-Pawlowski says some early signs of pre-eclampsia or preterm birth could be blood pressure related, like racing heartbeat, headaches and blurry vision. Early signs of spontaneous labor could be unexpected and recurrent contractions or a clear fluid that could point to a break in membranes.

Jelliffe-Pawlowski is involved with the California Preterm Birth Initiative, which works directly with the women who have experience with preterm birth.

"One of the things that they've said to us, and that I think about a lot, is that they believe they have a right to know about the risk and to prepare for the risk of a preterm birth," she says.

For researchers working on the problem, understanding the biology of preterm birth is just one piece of the puzzle. Risk for preterm birth is also associated with poverty and other social and environmental factors, says Stanford's Stevenson.

"We can make changes in these psychosocial and demographic factors which are associated with preterm birth," he says. "For example, issues of poverty, issues of stress as it might be manifested through structural racism and institutionalized social disadvantage."

A 2014 poll by NPR, the Robert Wood Johnson Foundation and the Harvard School of Public Health showed a third of people making less than $20,000 a year were under considerable stress in the previous month.

Stress is a contributor to inflammation, which affects likelihood of preterm birth, Stevenson says. All birth, he explains, is an inflammatory process. Too much inflammation early in pregnancy, like infection, is associated with early labor.

"If we can find other ways, instead of a new drug or medicine, to block these signaling pathways — for example, in changing our environments and eliminating social disadvantage, and educating people — we are as interested in that as we are in addressing the biology," he says.

Traffic and industrial air pollutants can increase risk for very early preterm birth by possibly increasing inflammation, according to Stanford's Gary Shaw. There's an overlap, he says, between poverty and pollution in neighborhoods hit hard by both.

When looking at maps of where preterm birth hits especially hard, UCSF's Larry Rand says, it's clear that prematurity most dramatically affects families and women of color and low-income communities.

"It's really a massive issue of health disparity and health inequity," Rand says.

Sara Kiley Watson is an intern with NPR's Science desk.