Accessibility links
Estrogen Might Have A Role In Alzheimer's Prevention After All, Scientists Say : Shots - Health News Scientists are taking a second look at the idea that hormone replacement therapy could reduce a woman's risk of dementia. New research suggests the key may be in giving it at the right time. 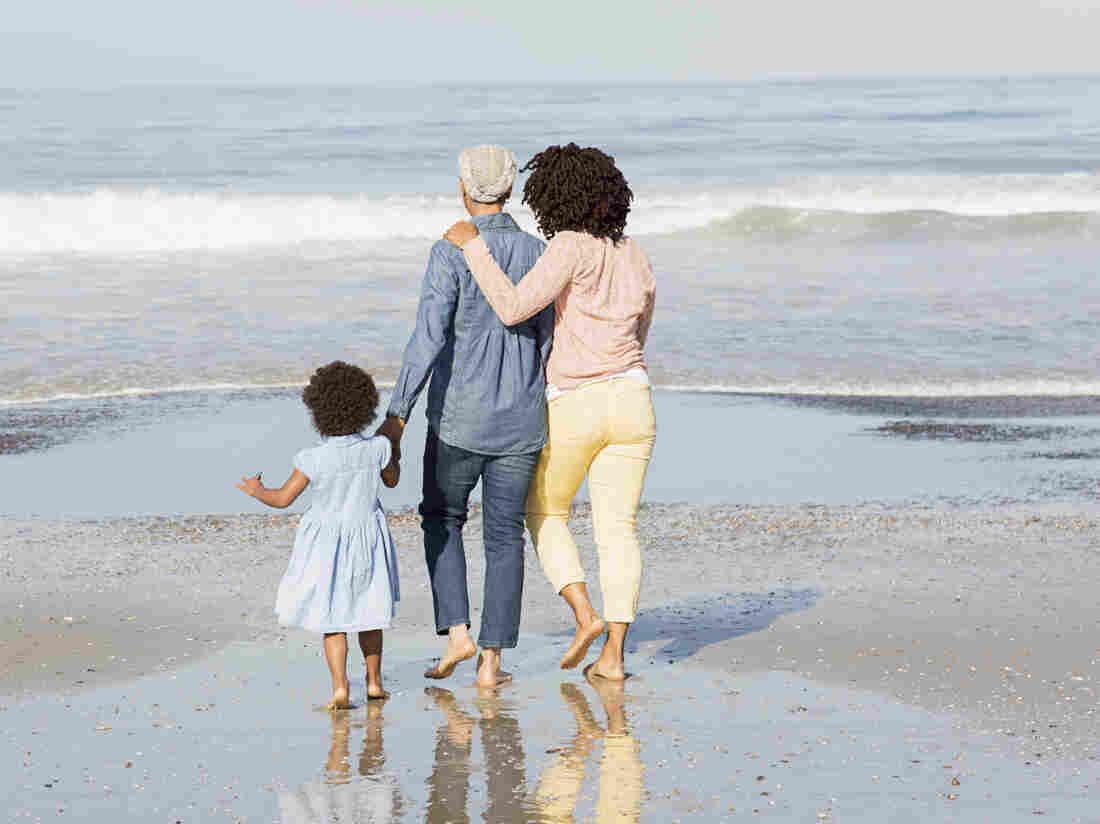 Having more than one child is associated with a lower risk of Alzheimer's, research finds, as is starting menstruation earlier in life than average and menopause later. Ronnie Kaufman/Blend Images/Getty Images hide caption 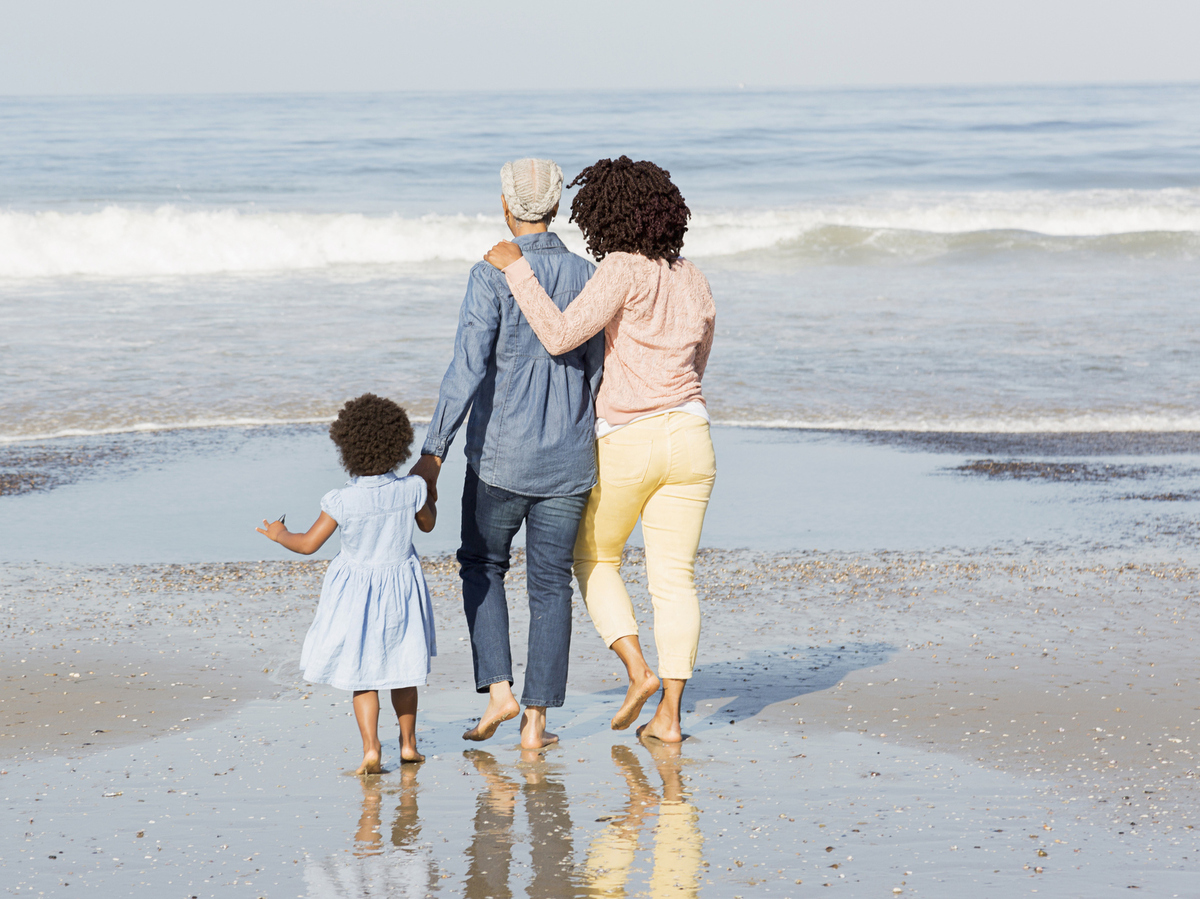 Having more than one child is associated with a lower risk of Alzheimer's, research finds, as is starting menstruation earlier in life than average and menopause later.

There's new evidence that a woman's levels of female sex hormones, including estrogen and progesterone, can influence her risk of Alzheimer's and other forms of dementia.

Women are less likely to develop dementia later in life if they begin to menstruate earlier, go through menopause later, and have more than one child, researchers reported Monday at the Alzheimer's Association International Conference in Chicago.

And recent studies offer hints that hormone replacement therapy, which fell out of favor more than a decade ago, might offer a way to protect a woman's brain if it is given at the right time, the researchers said.

The findings could help explain why women make up nearly two-thirds of people in the U.S. with Alzheimer's, says Maria Carrillo, the association's chief scientific officer.

"It isn't just that women are living longer," Carrillo says. "There is some biological underpinning. And because of the large numbers of women that are affected, it is important to find out [what it is]."

Scientists have long suspected that sex hormones such as estrogen and progesterone play a role in Alzheimer's. And two studies on dementia and what occurs during a women's reproductive years support that idea.

One of the studies looked at nearly 15,000 women in California. And it found an association between a woman's reproductive history and her risk of memory problems later in life.

The risk of dementia for women who had three or more children was 12 percent lower than the risk for women who had one child, according to Paola Gilsanz of Kaiser Permanente Northern California Division of Research, and Rachel Whitmer of the University of California, Davis.

Also, women who began to menstruate earlier and went through menopause later were less likely to develop dementia. Menopause at age 45 or younger seemed to increase the risk by 28 percent.

Another study of 133 elderly women in the U.K. found that the more months of pregnancy they experienced during their lives, the lower their risk of developing Alzheimer's.

The findings all suggest that female sex hormones — which rise at puberty and during pregnancy, then fall at menopause — are somehow affecting a woman's risk of developing Alzheimer's and other forms of dementia. The results also suggest that greater exposure to these hormones, through more pregnancies or more reproductive years, can reduce a woman's risk.

But it's still not clear whether the mere presence of female sex hormones is a reason that the frequency of Alzheimer's is greater in women than in men.

One possibility is that it's not female sex hormones on their own, but rapid changes in their levels that are a problem, says Pauline Maki, a professor of psychiatry and psychology at the University of Illinois at Chicago, who presented research at the Alzheimer's conference.

"Women experience these very dramatic hormonal transitions that in the long run can give rise to Alzheimer's disease," she says.

One way for women to minimize the dramatic hormonal changes that occur at menopause is to use hormone replacement therapy.

Possible Heart Benefits Of Taking Estrogen Get Another Look

That approach fell out of favor more than a decade ago when a large study found that women who took estrogen plus progestin after menopause were actually more likely to get some form of dementia. They also appeared to have a higher risk of heart disease and breast cancer.

But Maki says more recent studies suggest that hormone therapy — especially estrogen alone — really can be helpful if women get it at the right time.

"The effects of hormone therapy depend on the timing of use," Maki says. "Use later in life is detrimental, whereas use early in the menopausal transition could be beneficial."

An analysis presented at the Alzheimer's conference supports that idea.

And estrogen may benefit the mental function of younger women because it reduces the hot flashes associated with menopause, Maki says.

Findings like that are renewing interest in the idea that someday, it may be possible to use hormones around the time of menopause to prevent Alzheimer's and other forms of dementia later on, Maki says.

In the meantime, there's evidence that hormonal differences between men and women may affect their brains in ways that affect doctors' ability to accurately diagnose Alzheimer's, Maki says.

At the Alzheimer's conference, she presented research showing that women tend to have higher verbal memory skills than men, even when they are in the early stages of Alzheimer's. As a result, women are likely to be diagnosed with the disease later than men.

It's unclear whether male hormones, such as testosterone, affect a man's risk of Alzheimer's.

Worried About Dementia? You Might Want to Check Your Blood Pressure