Accessibility links
Doctors And Nurses Screen Patients To Fight Human Trafficking : Shots - Health News Many people forced into labor or the sex trade seek medical help at some point, and health care workers are being trained to identify them and to offer assistance. 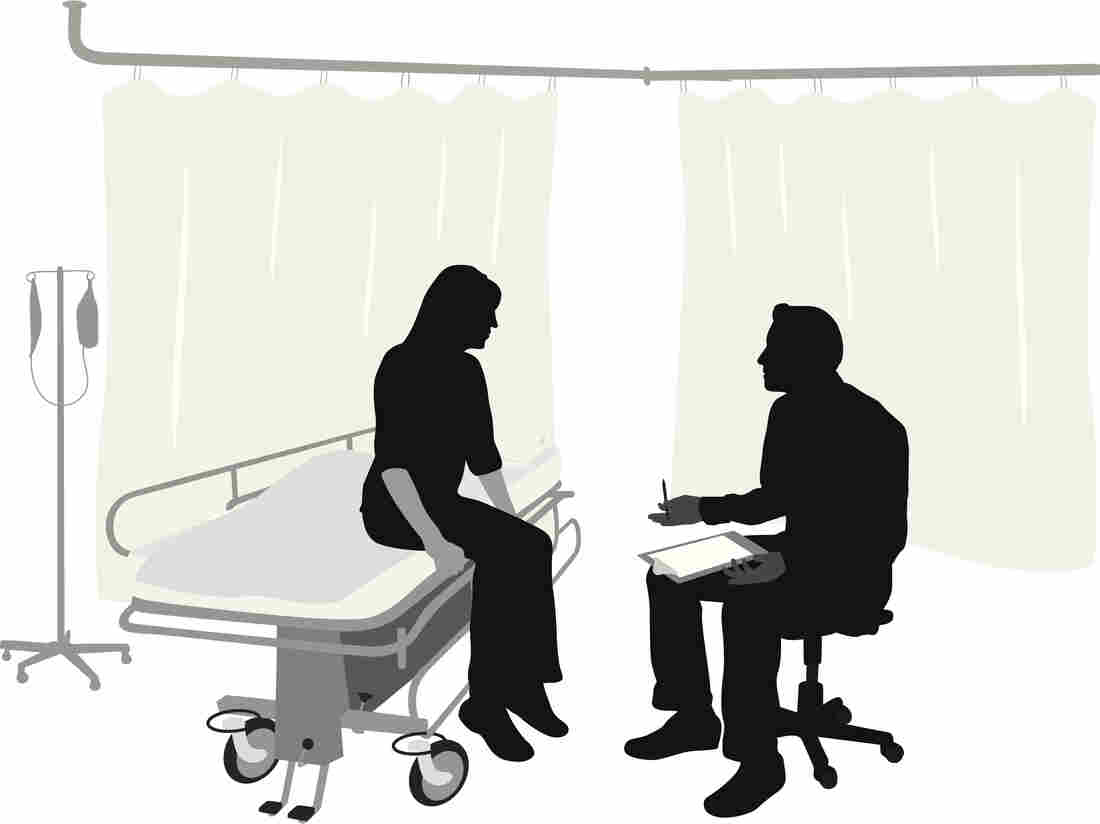 Training on how to spot human trafficking is given not only to doctors and nurses but also to registration and reception staff, social workers and security guards. A-Digit/Getty Images hide caption 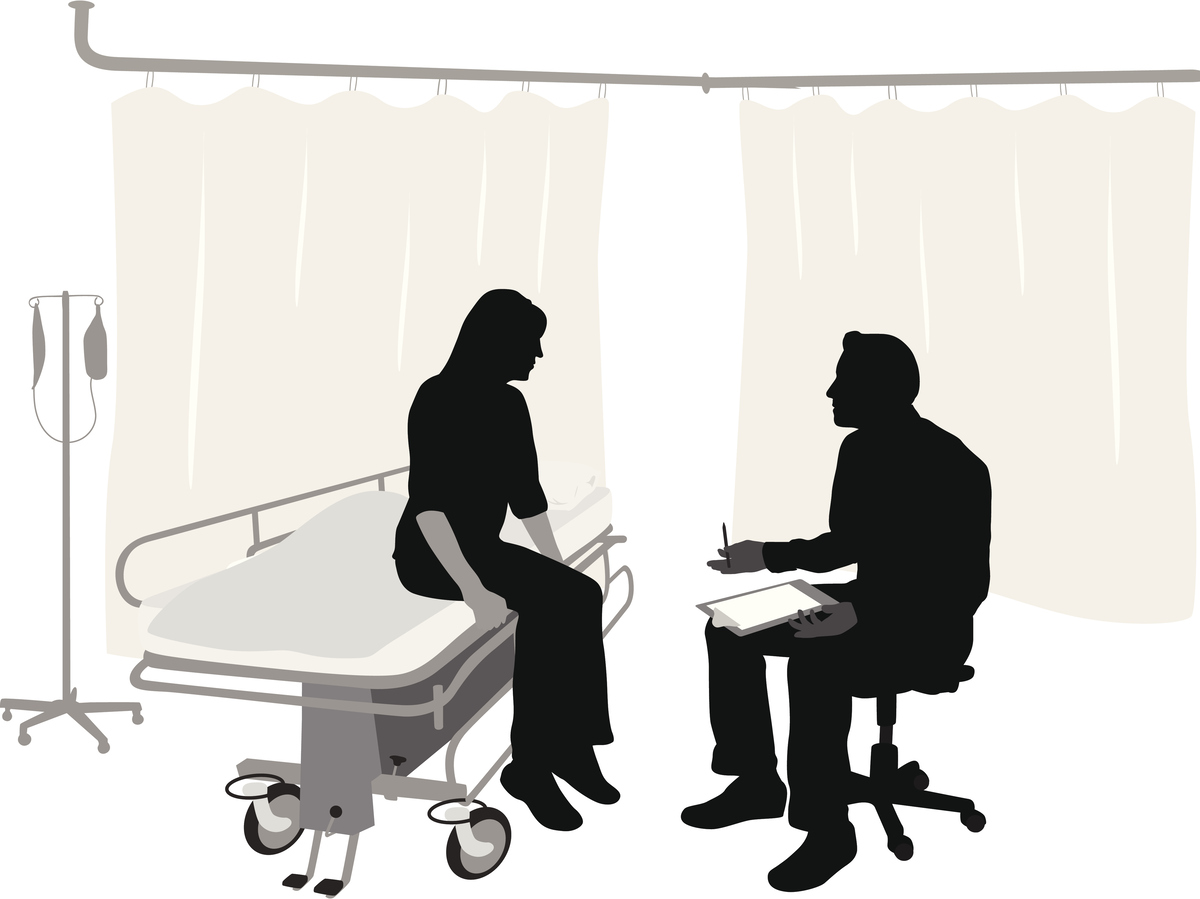 Training on how to spot human trafficking is given not only to doctors and nurses but also to registration and reception staff, social workers and security guards.

The woman arrived at the emergency department at Huntington Hospital on New York's Long Island after she was hit by her boyfriend during an argument. Her situation raised concerns among the medical staff, which had recently been trained to be on the lookout for signs of sex trafficking.

An undocumented immigrant from El Salvador, she worked at a local cantina frequented by immigrants. Her job was to get patrons drinks and to dance with them, but many workers in those jobs are expected to offer sex, too. Her boyfriend didn't want her to work there, and that led to the fight, one doctor recalled.

As part of the intake process, the emergency staff asked the 36-year-old woman a series of questions about whether she'd ever had sex for money, or whether she had to give someone else part of what she earns, among other things. The screening questions were part of a new program at Northwell Health, a 23-hospital system in the New York metro area that includes Huntington Hospital, to train staff and provide them with tools to identify and support victims of human trafficking.

There are few hard figures for how many people are harmed by human trafficking, the term used when individuals are forced to work or have sex for someone else's commercial benefit. Polaris, a Washington, D.C.-based nonprofit that advocates for these people and runs help lines for them, says calls and texts to its national hotlines have steadily ticked up in recent years, increasing the number of cases 13 percent to 8,759 between 2016 and 2017.

But health care providers frequently fail to recognize these patients' situation. According to a 2014 survey of about 100 survivors of sex trafficking, 88 percent said that while they were being trafficked they had contact with a health care provider, typically someone in an emergency department.

"When trafficking victims come through the health care system but we don't identify them, it's a big missed opportunity," says Dr. Santhosh Paulus, a family physician who is the site director of the Huntington Hospital's family medicine residency program and who started the program at Northwell.

Northwell is one of a growing number of hospitals and health care systems that are putting such programs in place. They want to alert staff to be on the lookout for trafficking, much as they watch for signs of child abuse, domestic violence and elder abuse.

Since last spring, nearly 300 staff members at Huntington Hospital and a family clinic have received training in how to spot trafficking victims and how to help them.

Training is given not only to doctors and nurses but also to registration and reception staff, social workers and security guards. Restore NYC, an organization that assists people caught up in sex trafficking, provided the initial training to key staff, and a hospital task force trains the others. During the next few years, similar efforts will be rolled out at all of Northwell's 23 hospitals, Paulus says.

One of the big red flags is when people delay coming in for medical care, such as waiting weeks to come in to get an injured ankle or sexually transmitted infection checked out, Macias-Konstantopoulos says. Or it may be a pattern of injuries that don't make sense. Sometimes people are reluctant to explain their injury, or they come in with someone who seems overbearing.

"Having a high index of suspicion is the first step," she says. "If we're not asking about it, we're just not going to see it."

Starting in October, health care providers can also start using new diagnosis codes in their records to differentiate trafficking from other types of abuse. This will help track the number of victims and provide appropriate treatment.

Asking may not be enough, however. Depending on what's going on in their lives, these patients may not be willing or ready to acknowledge that they need help, says Holly Gibbs, human trafficking response program director for Dignity Health, a health care system with nearly 40 hospitals in California, Nevada and Arizona.

Gibbs knows the issue well. She was forced briefly into prostitution in Atlantic City, N.J., after meeting a man at a shopping mall as a 14-year-old and running away with him. The man persuaded Gibbs to go with him with promises of a new, glamorous life as a musician or model.

At the time, Gibbs says, she thought that what happened to her was her own fault, a result of choices she made. No health care or law enforcement professional connected her to social services that could have helped her understand otherwise. She was reunited with her family by law enforcement personnel, who arrested the man, who was later convicted.

Dignity Health has implemented a human trafficking response program in the emergency departments and labor and delivery areas of each of its hospitals. Now it's rolling out the program at clinics and physicians' offices as well.

A key priority is to help clinicians know how to talk to patients about any violence they may be facing and to connect the patients with outside sources of help.

But in the end, if these patients don't want assistance, "you respect their wishes," Gibbs says. "They may not be ready to accept help now, but you may plant seeds so they'll be able to accept it later on."

Kaiser Health News is a nonprofit news service covering health issues. It is an editorially independent program of the Kaiser Family Foundation that isn't affiliated with Kaiser Permanente. You can follow Michelle Andrews on Twitter: @mandrews110.