Accessibility links
What Does It Mean To Be A Doctor With A Disability? : Shots - Health News Disabled Americans working in medicine are speaking up about their role in the profession. Not only can they perform the work of doctors, but they offer a level of empathy others may lack.

Doctors With Disabilities Push For Culture Change In Medicine

Doctors With Disabilities Push For Culture Change In Medicine 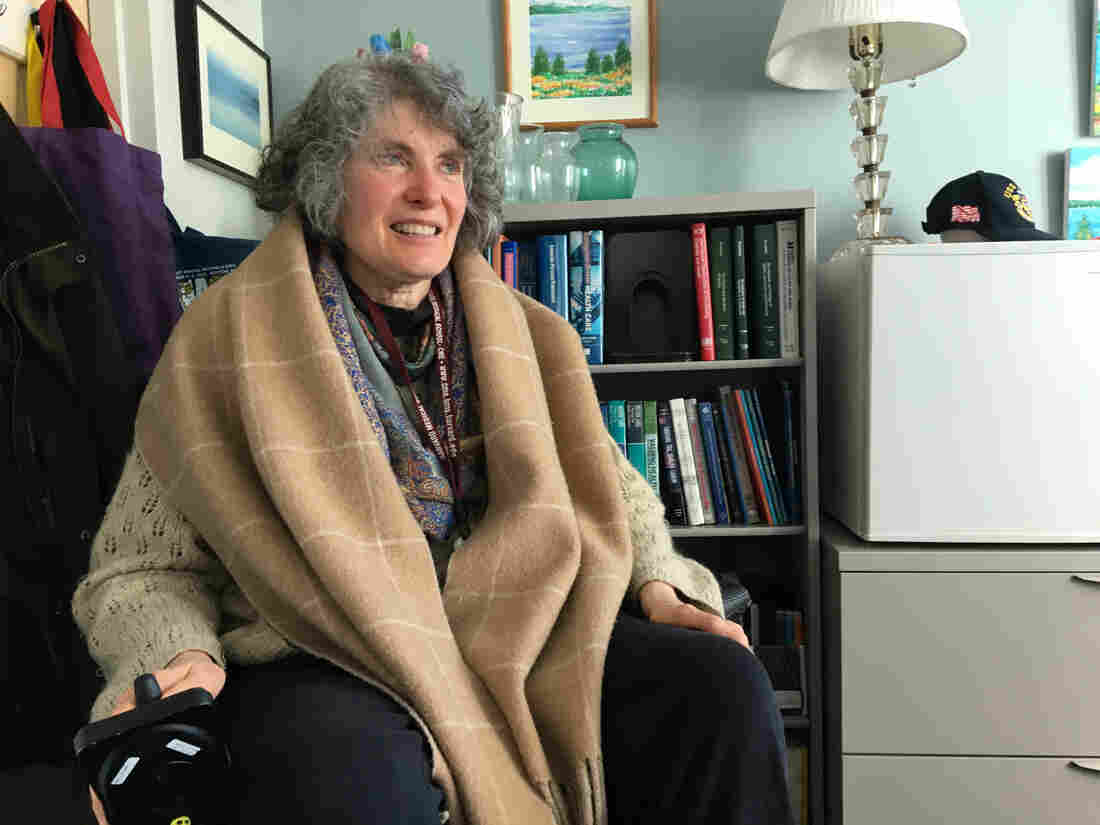 Lisa Iezzoni is professor of medicine at Harvard. She has multiple sclerosis and researches disparities in health care for people with disabilities. Elana Gordon/WHYY hide caption 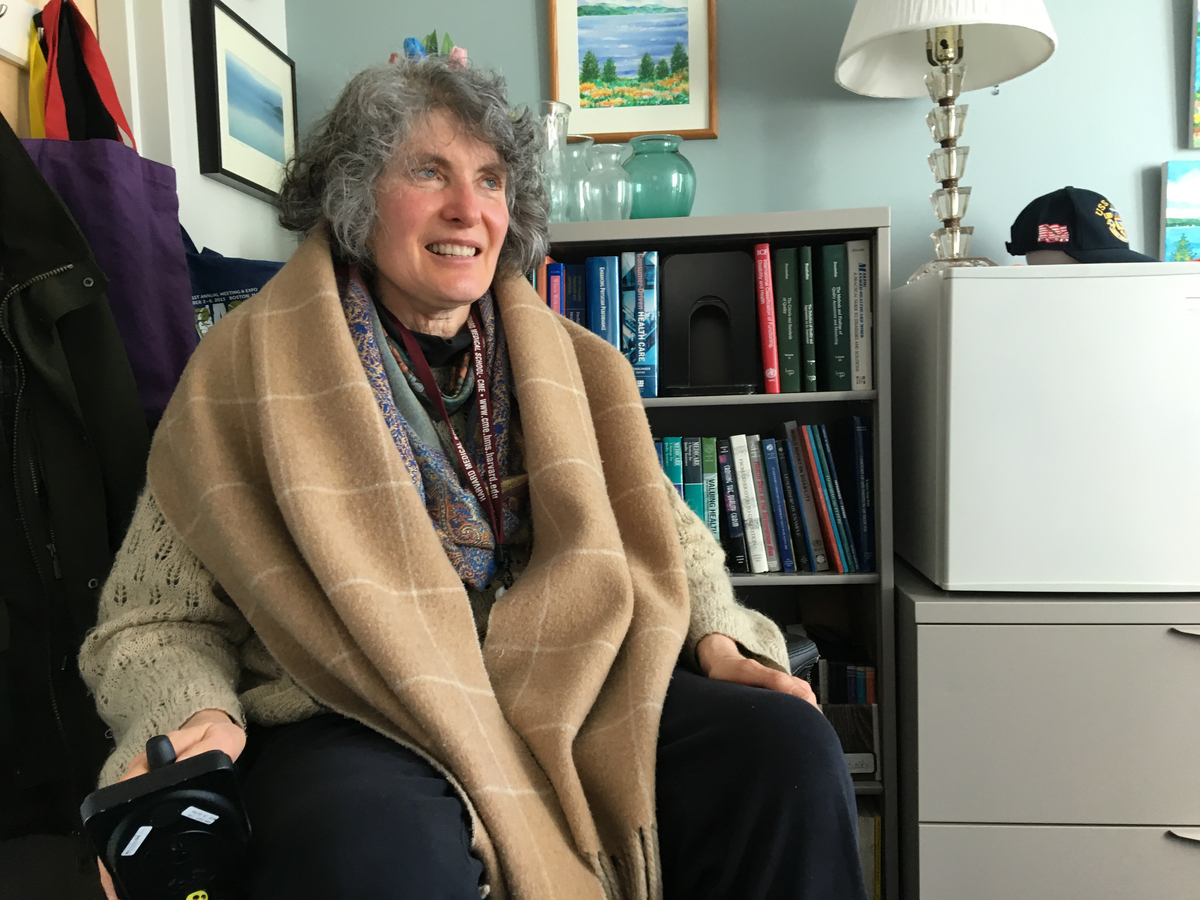 Lisa Iezzoni is professor of medicine at Harvard. She has multiple sclerosis and researches disparities in health care for people with disabilities.

Lisa Iezzoni was in medical school at Harvard in the early 1980s when she was diagnosed with multiple sclerosis. She started experiencing some of the symptoms, including fatigue, but she wasn't letting that get in the way of her goal. Then came the moment she scrubbed in on a surgery and the surgeon told her what he thought of her chances in the field.

"He opined that I had no right to go into medicine because I lacked the most important quality in medicine," Iezzoni recalls "And that was 24/7 availability."

Iezzoni graduated from medical school but didn't end up becoming a practicing doctor. This was before the Americans with Disabilities Act passed in 1990, and she says she just didn't have the support.

In the decades since, court rulings and amendments have clarified rights and protections. But culture change has been slow to take hold in the profession.

Doctors are often portrayed as pinnacles of health, superhumans responding to emergencies around the clock, performing miracles of all kinds. They're seen as the fixers, not the ones ever in need of accommodations or care.

"This profession historically has viewed themselves as able-bodied in the extreme," Iezzoni says.

Now, a growing movement of current and aspiring doctors with disabilities is starting to challenge that narrative, saying it is a disservice both to the medical profession and to patients.

It's important to acknowledge and accommodate medical professionals with disabilities, says Lisa Meeks, a psychologist and researcher at Michigan Medicine specializing in disabilities in medicine and medical education. "It deserves attention and its own problem-solving," she says. 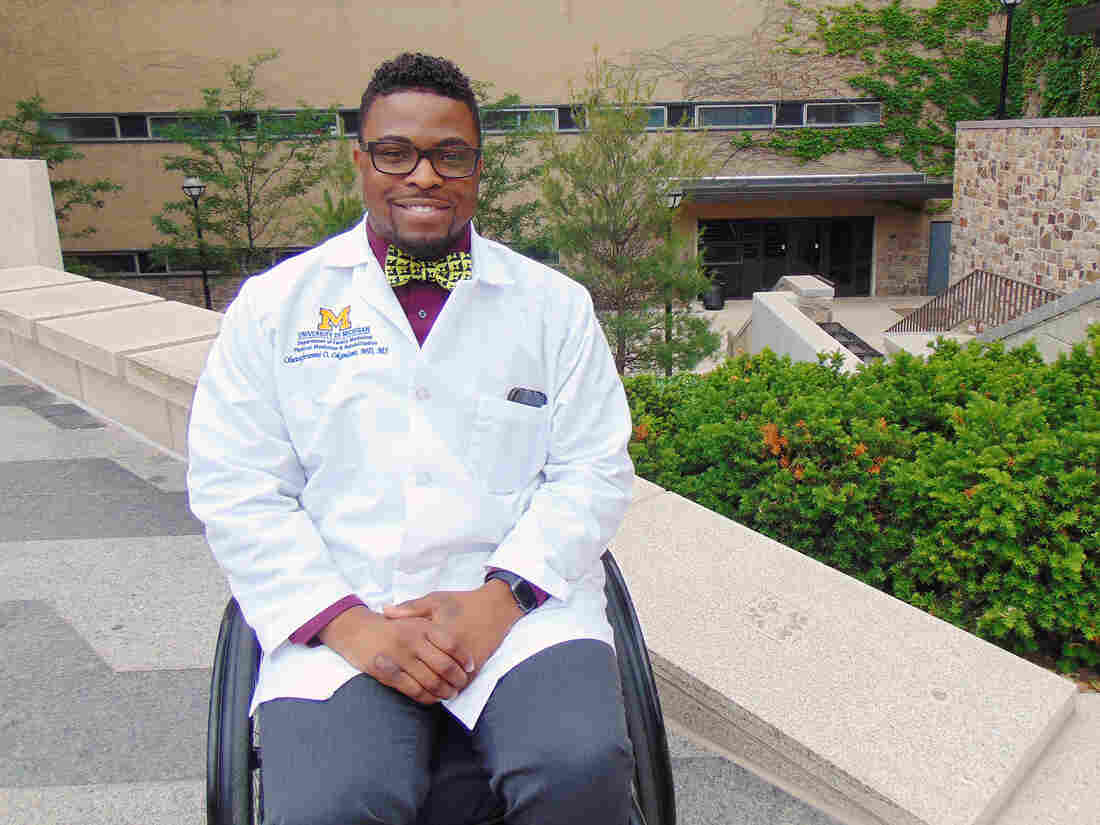 Feranmi Okanlami, a doctor at Michigan Medicine, became partially paralyzed after an accident in 2013, during his medical residency. Courtesy of Jina Sawani/University of Michigan hide caption 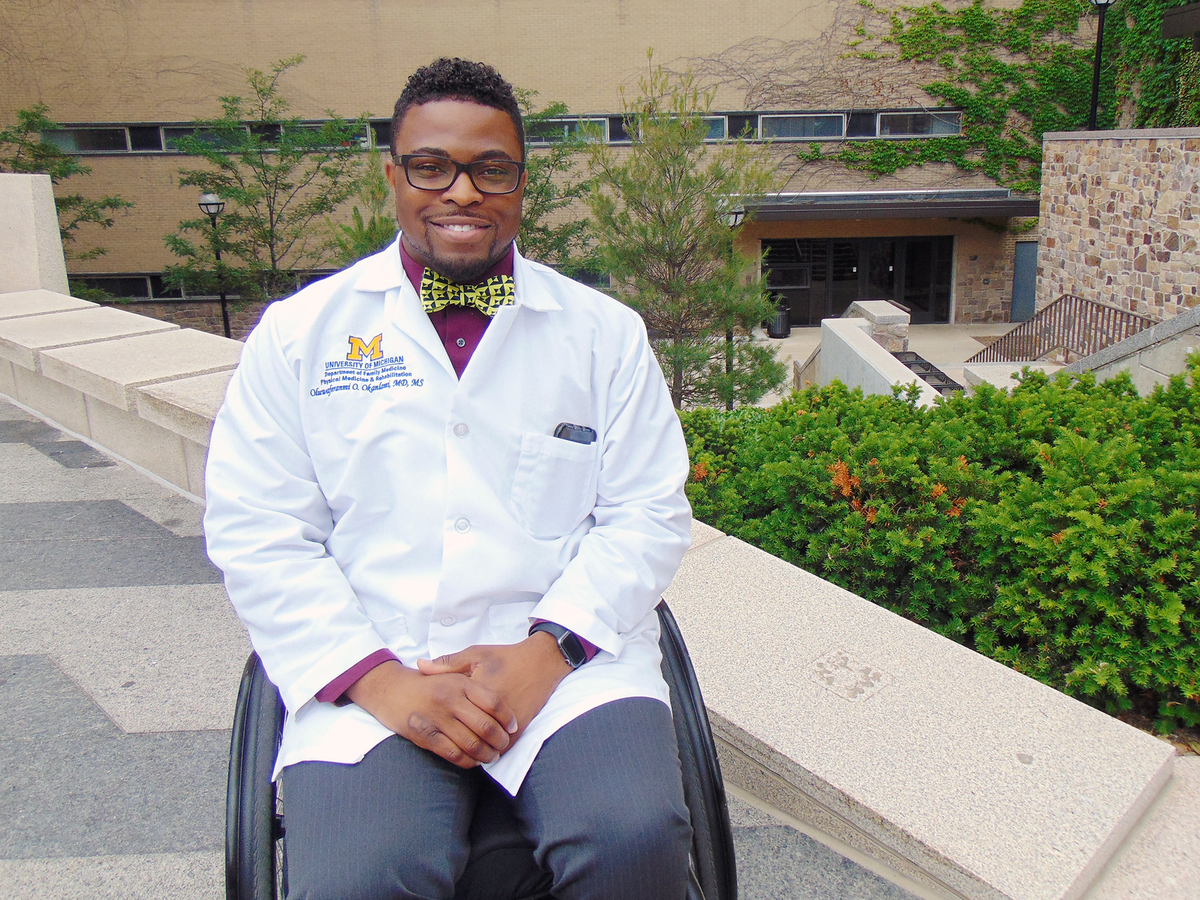 Feranmi Okanlami, a doctor at Michigan Medicine, became partially paralyzed after an accident in 2013, during his medical residency.

Courtesy of Jina Sawani/University of Michigan

Meeks co-founded the Coalition for Disability Access in Health Science and Medical Education, a group focused on improving access to medical education for students with disabilities.

She also co-authored a report released this year on disabilities and medicine, which found that many doctors still conceal their disabilities out of fear of stigma or bias.

Earlier this year, Meeks had a thought: If doctors with disabilities saw more people like themselves, would they talk more openly about the challenges and opportunities? She started a social media campaign with the hashtag #DocsWithDisabilities.

The goal was to find 20 doctors willing to share their stories online. She has been flooded with interest from doctors with disabilities.

And now #NursesWithDisabilities have joined in, too.

Among those who shared their stories was Erica Dwyer, an internal medicine resident at Cambridge Health in Boston.

"I was actually born deaf in one ear," Dwyer says. "I was almost done with medical school and then realized that I was also losing my hearing on the other side. And I started needing technology to help amplify my hearing and to help manage in clinical settings."

For Aspiring Doctors With Disabilities, Many Medical Schools Come Up Short

Dr. Jason Brookman, an anesthesiologist in Baltimore who has attention deficit disorder, published a case study on himself about how he has learned to managed his disability. It hasn't always been easy, he says, and he only recently publicly identified himself as the person featured in the case report.

Feranmi Okanlami was in his third year of medical residency at Yale's New Haven Hospital in 2013 when he had an accident jumping into a swimming pool. He injured his spinal cord and became partially paralyzed.

After rehab, he returned to practicing, and he is now a family medicine doctor at the University of Michigan.

"I think that once people see how many people are already out there practicing with disabilities, I think that will normalize this more," says Okanlami. "Disability does not mean inability."

He says he might not be the guy on the ground doing chest compressions during a code, when someone has stopped breathing. But a doctor is more than that.

"You have to be the person deciding what medication to give; you have to make sure that the people doing chest compressions are doing them adequately; you have to think about what could be the reason the person stopped breathing or their heart stopped," Okanlami says. "The tasks required to run a code aren't all just physical tasks."

Earlier this year he was invited to do grand rounds back at Yale, training residents at the very place he started his career before his accident.

Meeks says as the field has advanced, so have ideas about what it means to have a disability.

"What we view as absolute is very different now than what it was 10 years ago, and [we] owe a lot of that to assistive and adaptive technologies," Meeks says. "But also medicine is an ever evolving creature."

Counterperspectives like these have made all the difference for future doctors like Stacy Jones. She was diagnosed with a learning disability and attention deficit hyperactivity disorder in 2015, after her first year at Harvard Medical School. 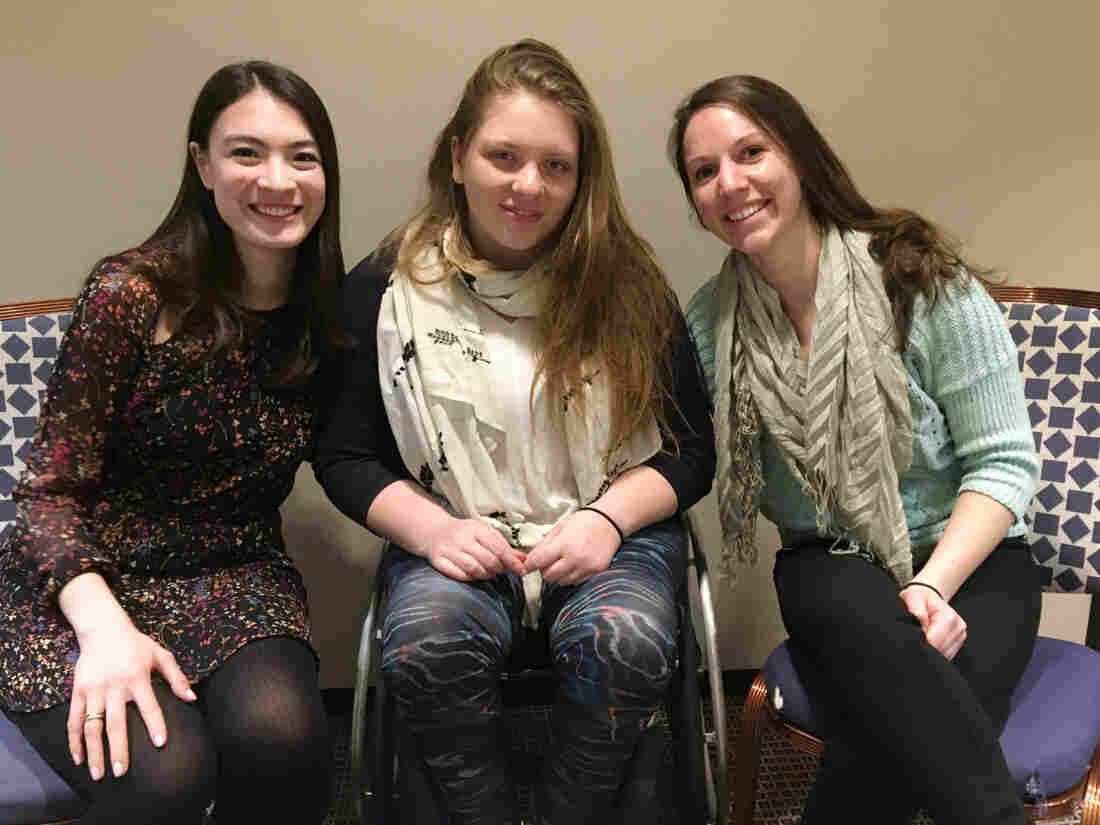 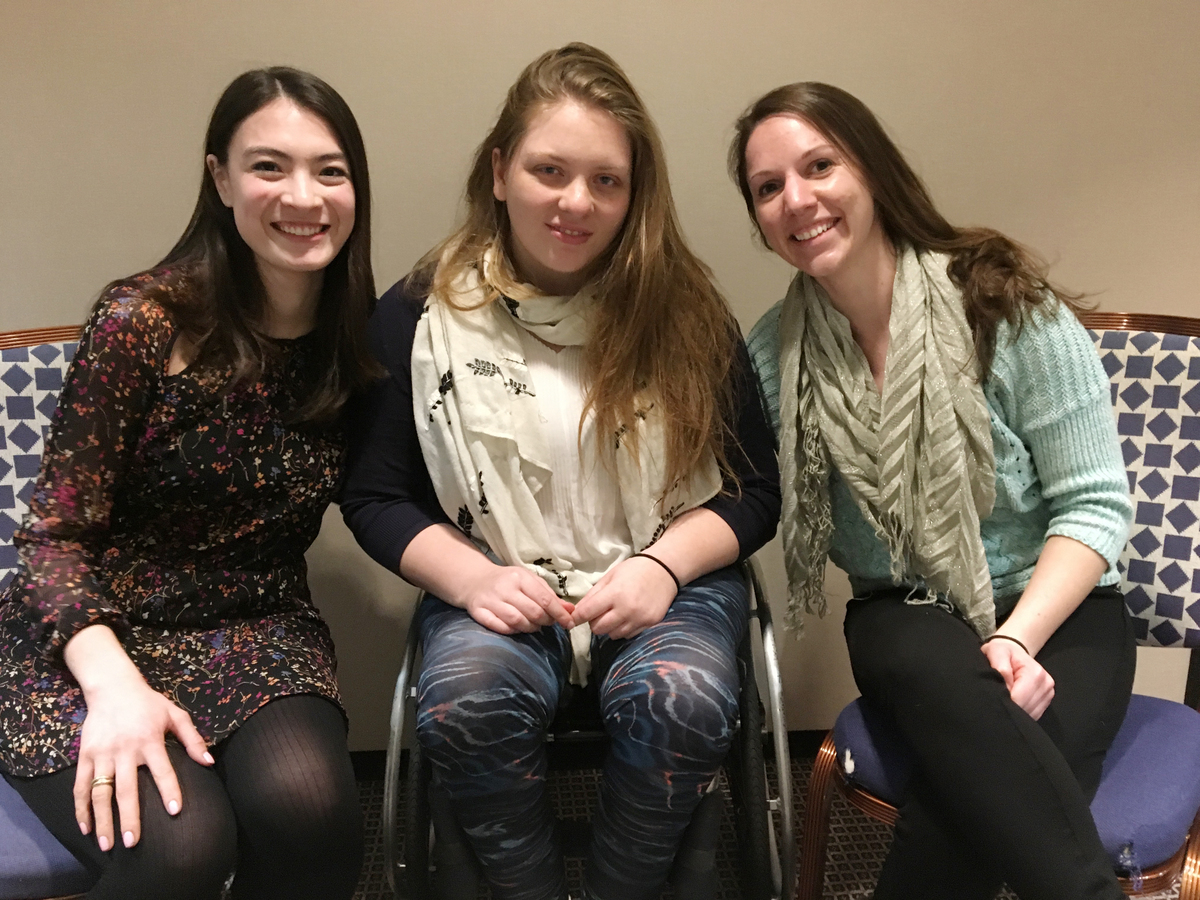 "At first it was a relief," she recalls of the diagnosis. "But then there was this denial."

Admissions of any sort of vulnerability or difference, let alone the word "disability," weren't something that she heard come up during her first year.

So she went on a search, literally Googling doctors with learning disabilities and dyslexia to find success stories. When she reached out to meet a nearby prominent doctor with dyslexia, it made a lasting impact, she recalls.

"She was the first person that really from firsthand experience provided me with a positive viewpoint," she says. "She was somebody who was like, 'I like my dyslexic brain.' "

Jones also connected with an older student who during a meeting openly spoke about having a learning disability and the struggle to find support.

"That was huge for me," Jones says. "It shows the importance of mentorship."

Since then, Jones has helped form a national student group aimed at "de-stigmatizing disability in medicine." As Jones now enters her final year of school, she says she has figured out the tools and technology she needs to succeed in medicine.

She thinks her experience will make her an even better doctor, especially for children and families with disabilities. She says families might have heard the message, "Your kid needs help — your kid needs special education; your kid isn't perfect."

It's an understanding that can be critical to patients.

"I think that part of the origins of disparities are stigmatizing attitudes," says Iezzoni, the former medical student with MS.

After her poor experience in medical school, Iezzoni went on to become a leading health policy researcher, directing the Mongan Institute Health Policy Center at Massachusetts General Hospital, where one focus is on disparities in health care for people with disabilities.

She and other researchers have found that patients with disabilities are less likely to receive recommended treatments and screenings, like Pap tests. One reason may be that doctors carry their own assumptions or don't always understand the nuances and realities of living with a disability.

For Iezzoni and this new wave of doctors, the most "able" physician of the 21st century is the one who can relate to all patients, whatever they're facing, and has the skills and creativity to give them the best care.

This story was produced in collaboration with WHYY's The Pulse, NPR and Kaiser Health News.

An earlier version of this story incorrectly referred to an institute at Massachusetts General Hospital the Longan Institute. It is the Mongan Institute.