Accessibility links
Neanderthals Got It On With Denisovans, Another Groups Of Ancient Humans : Shots - Health News Genomic sequencing reveals new evidence of interbreeding among different groups of our ancient relatives. A scientist calls the find "almost too lucky to be true." 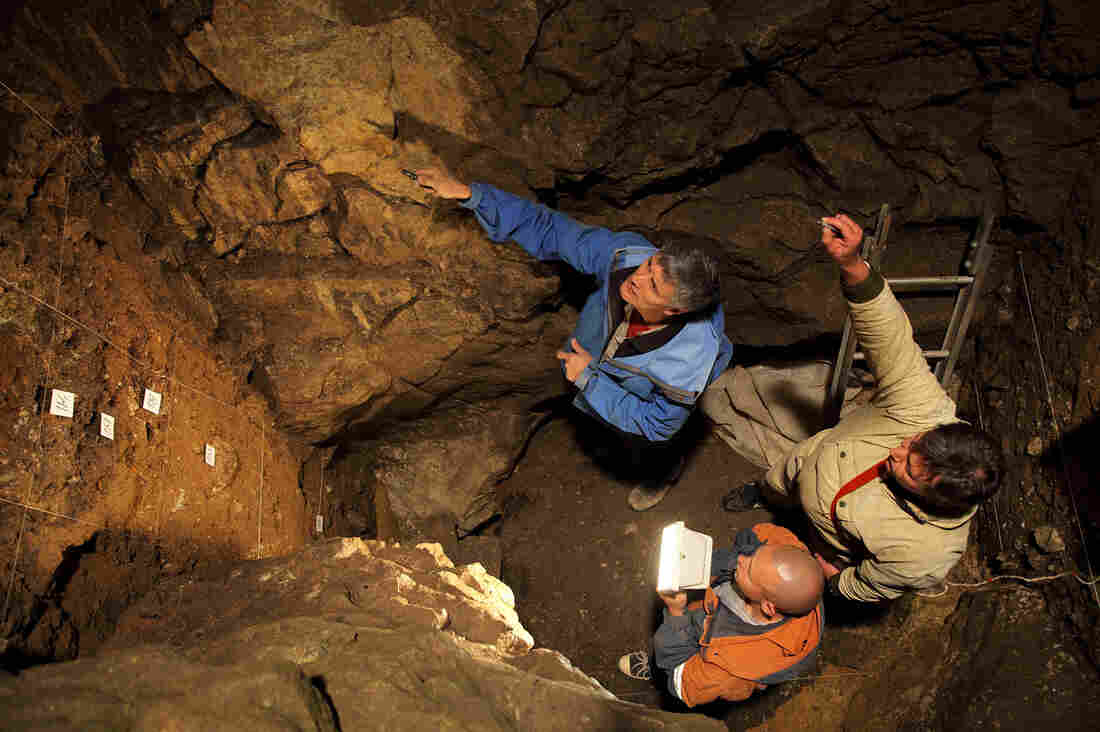 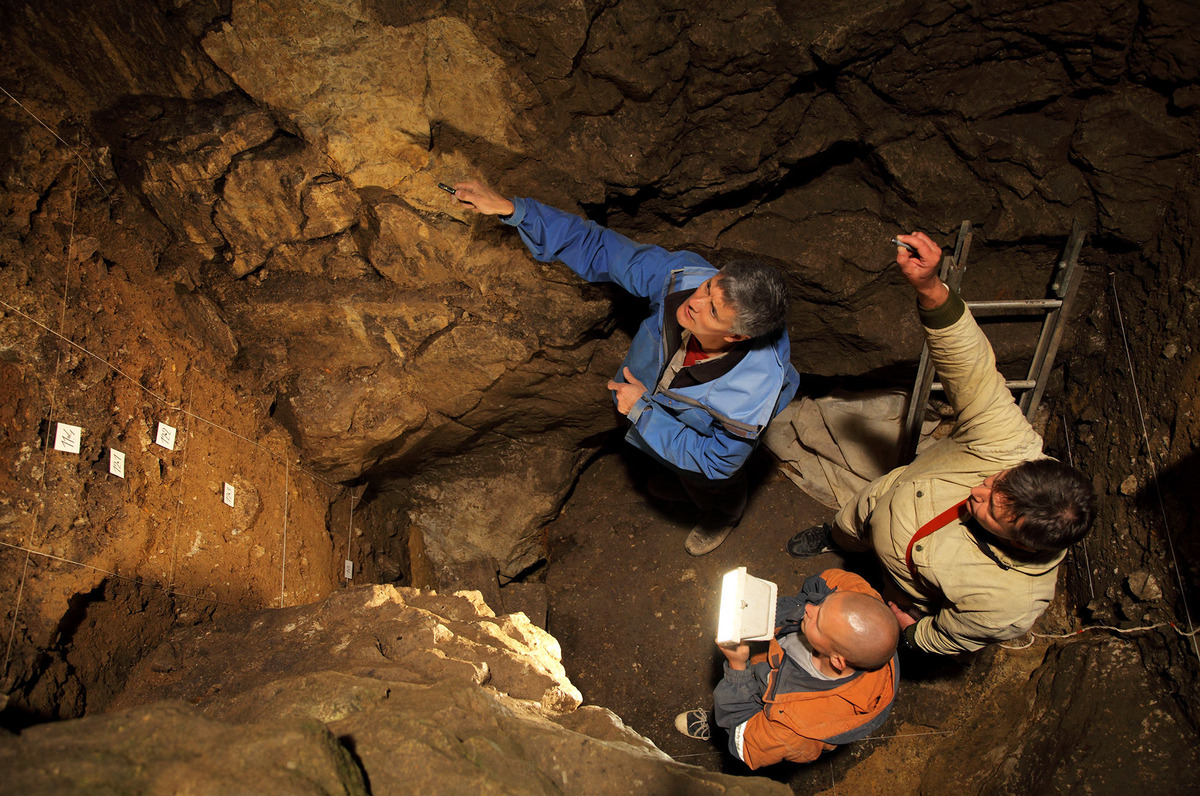 Researchers made an important discovery in the Denisova Cave in southern Siberia.

In the Altai mountains of southern Siberia, there's a cave that was inhabited for millennia. It's called Denisova, and it shelters something remarkable: the bones of different types of ancient human relatives.

Back in 2010, researchers analyzed a fossilized pinky finger bone found in the cave, and discovered a whole new branch of the human family tree. They were dubbed Denisovans: a group of now-extinct hominins genetically different from either Neanderthals or modern humans, who were roaming the planet at the same time.

After that discovery, researchers kept sifting through thousands of bone fragments in the cave, many of them from animals, until they found one that seemed like it could be from some kind of human relative. It turned out to belong to a young female who lived 90,000 years ago, whom they call Denisova 11.

Now they have sequenced her genome, and as they announced in Nature on Wednesday, they found something quite surprising: She had a Neanderthal for a mother and a Denisovan for a father.

"We then have very direct evidence – almost caught in the act, so to say – of mixing with each other," says Svante Pääbo, a geneticist at the Max Planck Institute for Evolutionary Anthropology in Leipzig, Germany, who led the research.

He says the discovery of first generation offspring of these two groups was "almost too lucky to be true."

Lucky, because scientists have scant physical remains from our distant Denisovan relatives: just two bone fragments and three teeth. (Big teeth — larger than those of either Neanderthals or modern humans.)

Scientists already knew that the two groups had mated with each other at some point in their past – there was a tiny amount of Neanderthal genes in the Denisovan genome they sequenced in 2010. But finding an individual like Denisova 11 suggests that these groups got quite friendly with each other when they did meet.

The findings offer fresh detail for scientists' understanding of the world 90,000 years ago. Neanderthals, Denisovans, and Homo sapiens occasionally encountered one another, perhaps escaping the rain in a nice cave. 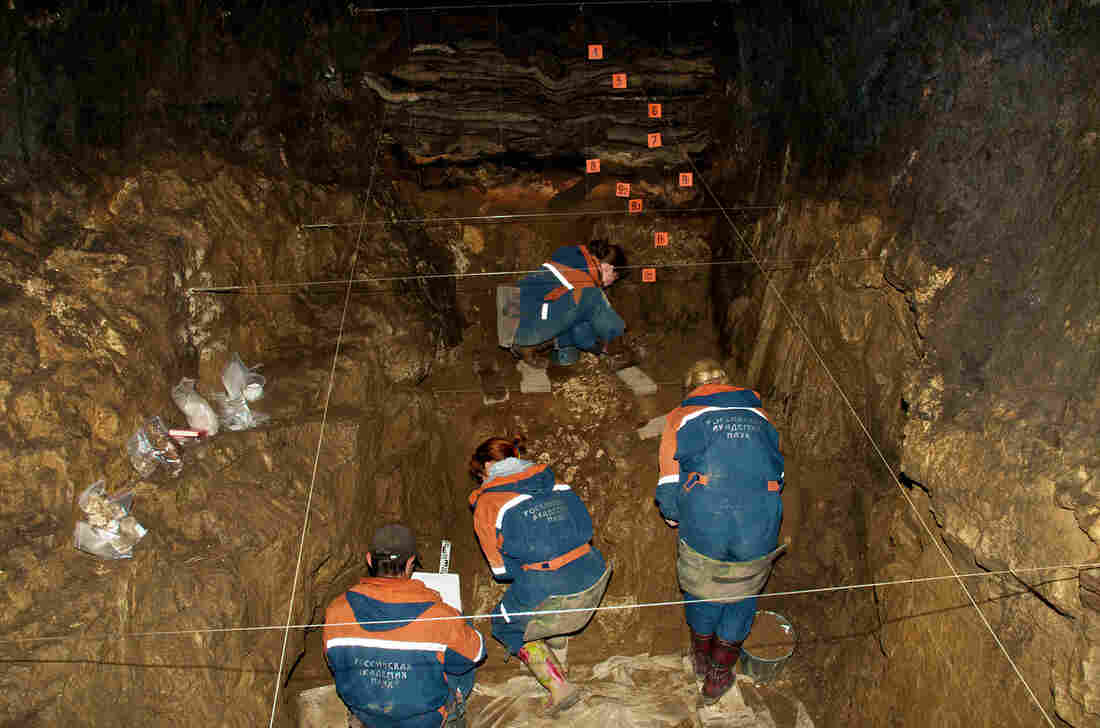 Some 2,000 bones — some animal, some ancient human — were found in the Denisova Cave. Bence Viola/Max Planck Institute for Evolutionary Anthropology hide caption 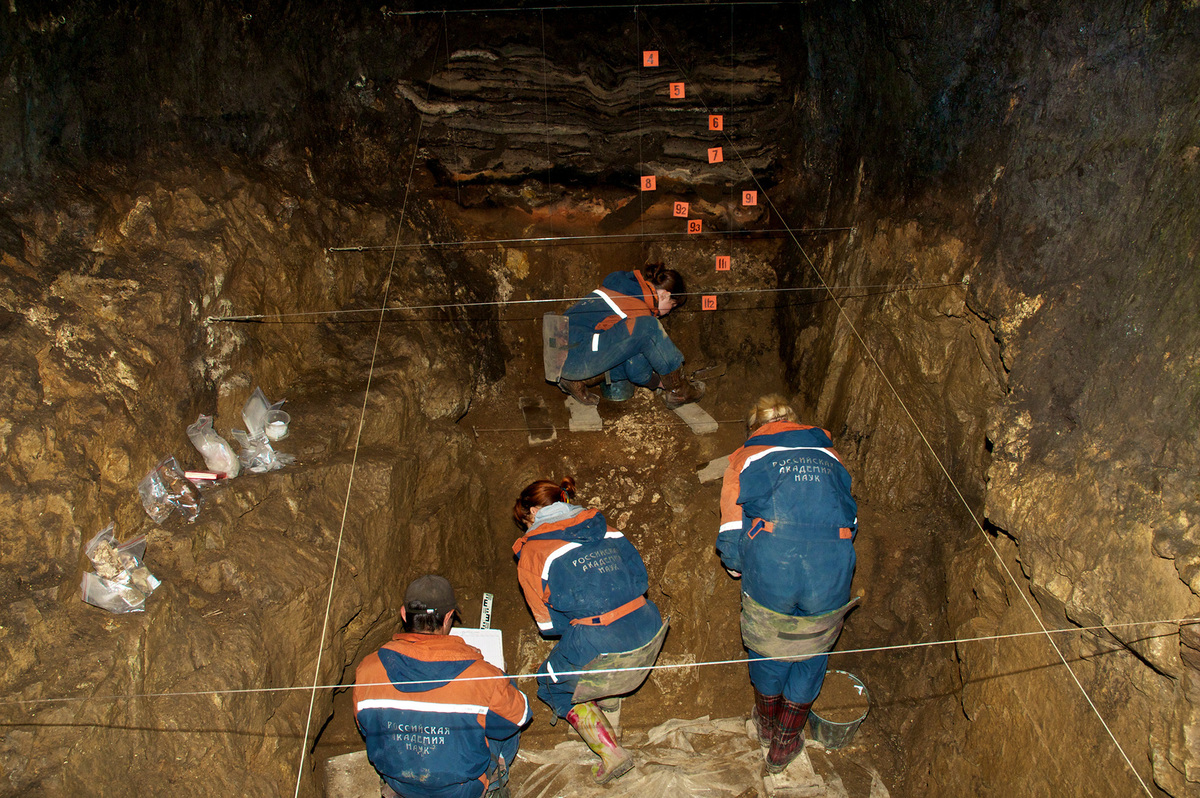 Some 2,000 bones — some animal, some ancient human — were found in the Denisova Cave.

But the fact that Neanderthals and Denisovans were quite distinct genetically means that such encounters didn't happen very often.

Sharon Browning, a professor of biostatistics and a statistical geneticist at the University of Washington, says the finding was "like catching something as it's happening."

"There can't have been too many of these admixed individuals," she says. "So just being able to find this particular bone that is from this type of individual is pretty amazing."

And, full disclosure: It wasn't just Denisovans and Neanderthals that were hooking up — Homo sapiens were mating with both groups, too.

"It's beginning to be a picture where all these groups, when they met, mixed quite readily with each other," says Pääbo.

The proof is in the genes of modern humans: Many people have Neanderthal or Denisovan DNA in their genomes, and it's a genetic contribution with real consequences.

"There are genetic variants from these groups that influence your propensity to get diabetes or blood clotting or even things like depression," he says.

Some of the genetic variants can be valuable, he adds: "Almost everyone in Tibet carries a genetic variant that comes from Denisovans. And the variant they carry helps you absorb more oxygen at high altitudes."

Pääbo says that the mating of ancient hominins may tell us something about what happened to our lost relatives.

"One could say that the reason that Neanderthals and Denisovans disappeared when modern humans appeared out of Africa may simply be that they became assimilated into the modern human populations," he says. "They mixed with the more numerous modern humans that came, and became incorporated — and therefore they disappear from the fossil record."