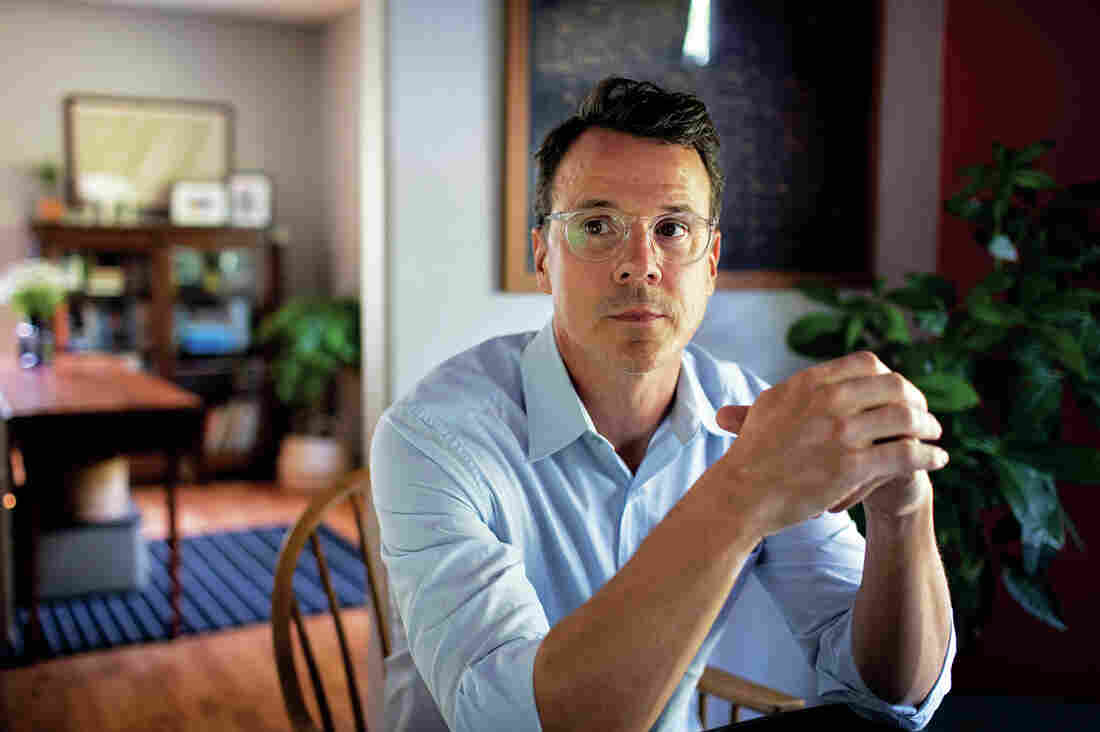 Drew Calver, a high school history teacher and swim coach in Austin, Texas, had a heart attack at his home on April 2, 2017. A neighbor rushed him to the nearby emergency room at St. David's Medical Center, which wasn't in the school district's health plan. Callie Richmond/KHN hide caption 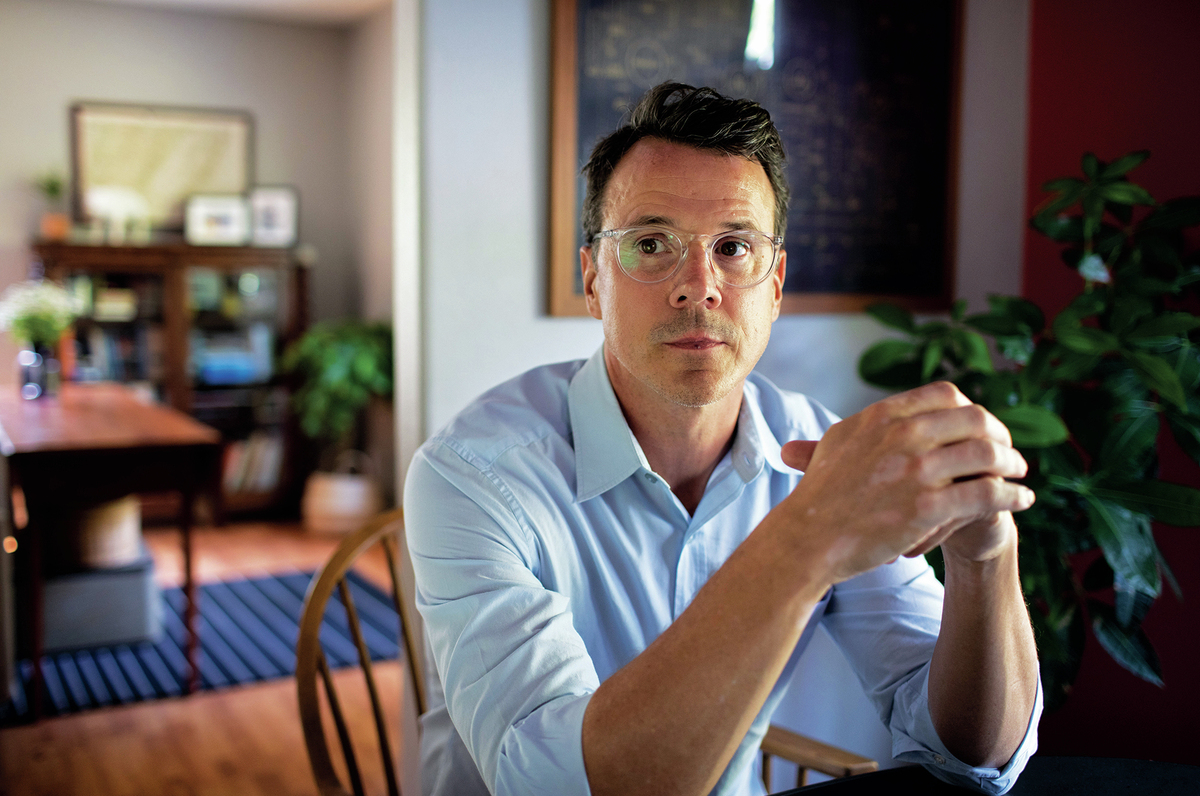 Drew Calver, a high school history teacher and swim coach in Austin, Texas, had a heart attack at his home on April 2, 2017. A neighbor rushed him to the nearby emergency room at St. David's Medical Center, which wasn't in the school district's health plan.

Editor's note: Shortly after this story by Kaiser Health News and NPR was published and broadcast on Monday, St. David's said it was now willing to accept $782.29 to resolve the $108,951 balance because Drew Calver qualifies for its "financial assistance discount." In a statement, the hospital said this offer was contingent on Calver submitting his application for a discount based on his household finances. Calver disputed that he owes any additional money to St. David's and said this situation should have been resolved long before now.

Drew Calver took out his trash cans and then waved goodbye to his wife, Erin, as she left for the grocery store the morning that upended his picture-perfect life.

Minutes later, the popular high school history teacher and swim coach in Austin, Texas, collapsed in his bedroom from a heart attack. He pounded his fist on the bed frame, violent chest pains pinning him to the floor.

"I thought I was dying," the 44-year-old father recalled. He called out to the only other person in the house, his oldest daughter, Eleanor, now 7. Using the voice-recognition feature on his phone, he texted his wife, who was at the store with their youngest, Emory, now 6. A neighbor rushed him to the nearby emergency room at St. David's Medical Center on April 2, 2017.

The ER doctors confirmed the damage to Calver's heart and admitted him to the hospital's cardiac unit. The next day, doctors implanted stents in his clogged "widow-maker" artery.

The heart attack was a shock for Calver, an avid swimmer who had competed in an Ironman triathlon just five months before.

Despite the surprise, Calver asked from his hospital bed whether his health insurance would cover all of this, a financial worry that accompanies nearly every American hospital stay. He was concerned because St. David's is out-of-network on his school district health plan. The hospital told him not to worry and that they would accept his insurance, Calver said.

The hospital charged $164,941 for his surgery and four days in the hospital. Aetna, which administers health benefits for the Austin Independent School District, paid the hospital $55,840, records show. Despite the difference of more than $100,000, with the hospital's prior assurance, Calver believed he would not bear much, if any, out-of-pocket payment for his life-threatening emergency and the surgery that saved him.

Medical treatment: Emergency room treatment followed by four days in the hospital, most of it spent in the cardiac unit. During surgery, four stents were implanted to clear a blockage in his left anterior descending artery, the source of so-called widow-maker heart attacks because they are so frequently deadly.

What gives: St. David's Medical Center is billing Calver for the $108,951.31 balance — an amount nearly twice his annual pay as a teacher.

The hospital's billing company sent a notice June 26, urging him to take advantage of this "FINAL opportunity to settle your balance."

"They're going to give me another heart attack stressing over this bill," Calver said. "I can't pay this bill on my teacher salary, and I don't want this to go to a debt collector."

Surprise bills occur when a patient goes to a hospital in his insurance network but receives treatment from a doctor who does not participate in the network, resulting in a direct bill to the patient. They can also occur in cases like Calver's, where insurers will pay for needed emergency care at the closest hospital — even if it is out of network — but the hospital and the insurer may not agree on a reasonable price. The hospital then demands that patients pay the difference, in a practice called balance billing.

Several states, including Texas (as well as New York, California and New Jersey) have passed laws to help shield consumers from surprise bills and balance billing, particularly for emergency care.

But there's a huge loophole: Those state-mandated protections don't apply to people, like the Calver family, who get their health coverage from employers that are self-insured, meaning the companies or public employers pay claims out of their own funds. Federal law governs those health plans — and it does not include such protections.

About 60 percent of people with employer health benefits are covered by self-insured plans, but many don't even know it, since employers typically hire an insurer to administer the plan and employees carry a card bearing the name of Blue Cross Blue Shield or another major insurer.

This case "illustrates the dangers that even insured people face," said Carol Lucas, an attorney in Los Angeles with experience in health care payment disputes. "The unfairness is especially acute when there is an emergency and the patient, who might ordinarily be completely compliant, has no say about the facility he winds up in."

In a statement, St. David's HealthCare defended its handling of Calver's bill and sought to blame the school district and Aetna for offering such a narrow network.

"While we did everything right in this particular situation, the structure of the patient's insurance plan as a narrow network product placed a large portion of the financial responsibility directly on the patient because our hospital was not in-network," the hospital said.

Patients experiencing an emergency are particularly at risk of landing at an out-of-network hospital. St. David's said once ER patients are deemed stable, it tries to transfer them to an in-network facility. "However, this is not always possible because the patient's health must come first," the hospital said.

This case also raises questions about the validity of the hospital's charges.

Industry analysts and consumer advocates say St. David's has a reputation for exorbitant billing and for trying to collect big payouts as an out-of-network provider. "This is a well-known, problematic provider. We've seen multiple bills from them and they are always highly inflated," said Dr. Merrit Quarum, chief executive of WellRithms, which scrutinizes medical bills for self-funded employers and other clients nationwide.

WellRithms reviewed Calver's bill in detail at the request of Kaiser Health News and determined that a reasonable reimbursement would have been $26,985. That's less than half what Aetna paid.

Healthcare Bluebook, which offers cost estimates for medical tests and treatments, arrived at a similar conclusion. It said a fair price for a hospitalization in Austin involving four heart stents would be about $36,800. St. David's Medical Center charged four times that amount.

Quarum and other analysts who reviewed the bill said several charges stood out, especially on the four stents, which were billed at $42,944. Coronary stents are typically metal mesh tubes implanted in arteries to improve blood flow. Most are coated with drugs to assist in healing. 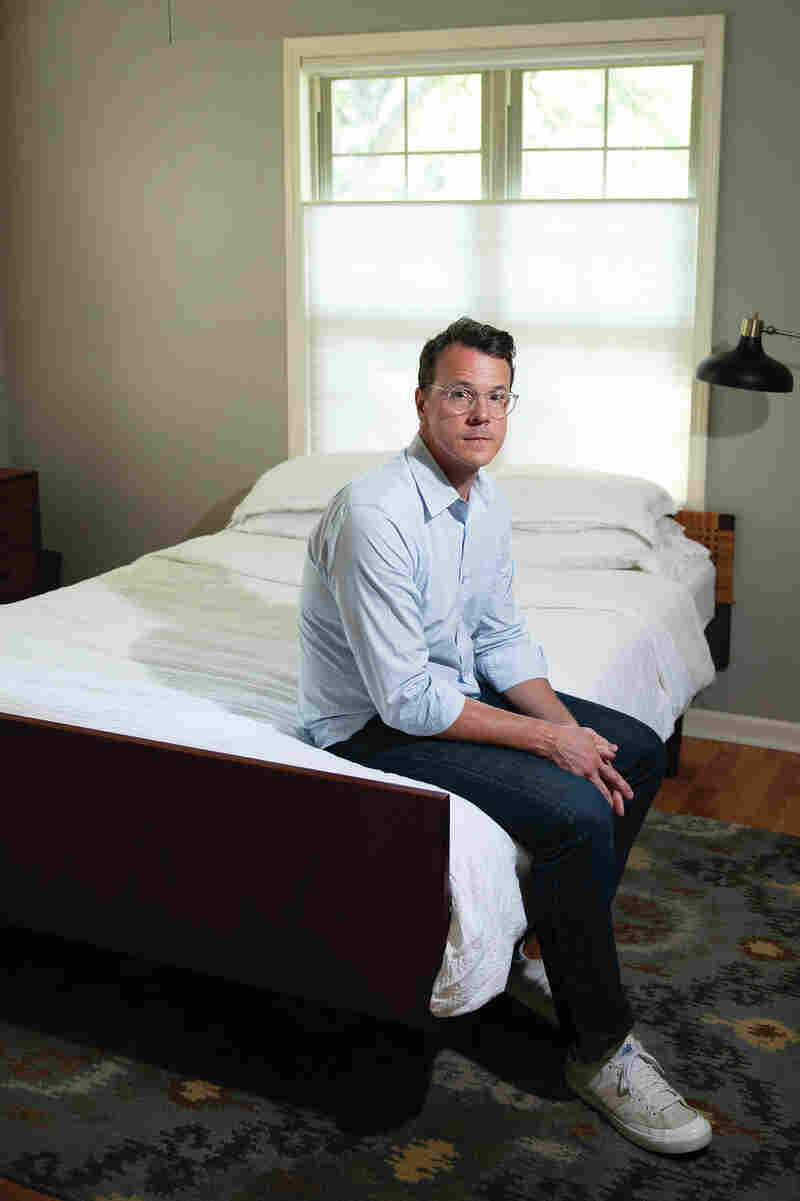 When Drew Calver collapsed in his bedroom from a heart attack, he lay on the floor pounding his fists in pain. "I thought I was dying," he said. Callie Richmond/KHN hide caption 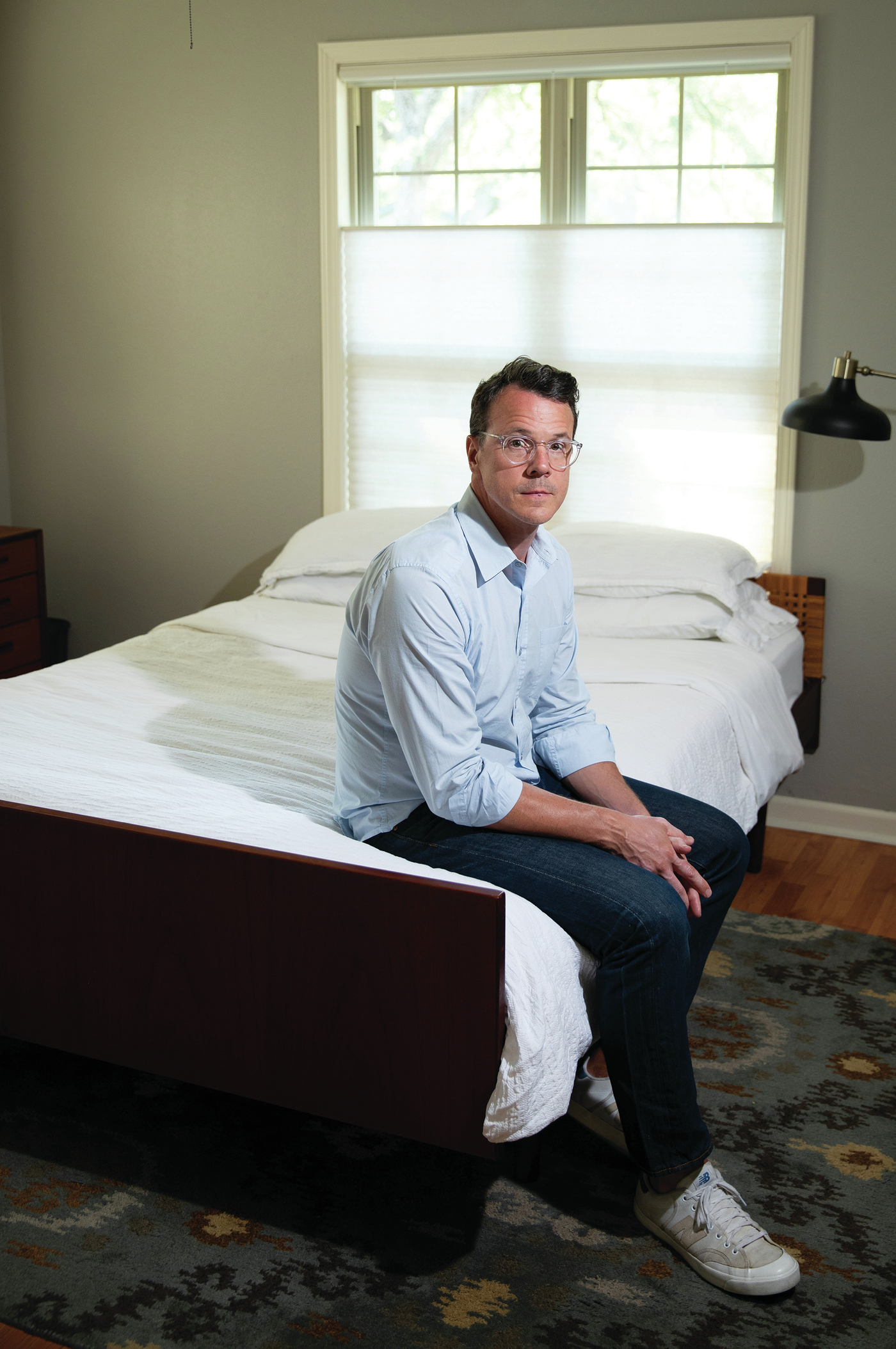 When Drew Calver collapsed in his bedroom from a heart attack, he lay on the floor pounding his fists in pain. "I thought I was dying," he said.

The $20,000 price tag represents a significant markup of what U.S. hospitals typically pay themselves for stents. The median price paid by hospitals for the Synergy stent was $1,153 over the past year, according to the nonprofit research company ECRI Institute.

"St. David's charge of over $19,000 for those stents is absolutely outrageous," Quarum said.

St. David's declined to comment on its markup for the stents or what it actually paid the manufacturer.

Resolution: For now, Calver still faces a bill for $108,951.31, with none of the parties involved in his treatment or coverage providing significant redress.

In fact, the hospital's debt collector sent the Calvers a letter Aug. 3 demanding payment in full.

After a reporter made inquiries, St. David's said collection efforts were put on hold, and a hospital representative called Calver, offering to help him apply for a discount based on his income.

In a statement, St. David's said, "We work with all patients needing financial assistance to help determine their eligibility for this discount."

Calver said that approach doesn't address the balance billing or whether the charges were appropriate.

A spokeswoman for Aetna said, "We are actively working to rectify the situation on behalf of the member." But the health plan hasn't shared any further details. The Austin school district declined to address this specific case.

Calver said the whole ordeal has been incredibly stressful for him and his wife.

"I am stuck in the middle of this convoluted, flawed system," he said. "I've never owed a large amount like this or had credit card debt. What does it mean if this goes on my credit report?"

The takeaway: Faced with a surprise bill or a balance-billing situation, don't rush to pay any medical bills you receive. First, let the insurance process play out completely so you're sure what the health plan is paying the hospital and doctors — and what you ultimately might be responsible for, in terms of coinsurance or copayments.

Ask for an itemized bill. Review the charges carefully and talk to your insurer, your employer and the hospital if the prices seem out of line. Arm yourself with estimates you can find online of the average prices charged in your area as you negotiate with all the players.

If the bills keep coming, talk to your employer's benefits department or the state insurance department about your legal protections. The situation will vary depending on the type of health insurance you have and the state you live in. Tell any debt collection agencies that may contact you that you are contesting the bill.

With any of these entities, you can always appeal to reason, with this argument: You had no choice but to go to an out-of-network hospital in the case of a life-threatening emergency, so the insurer and the hospital should work out payment and hold you harmless from financially crippling bills.

Ashley Lopez, who contributed to the audio story, is part of NPR's reporting partnership with member station KUT and Kaiser Health News.