Accessibility links
Retired Lab Chimps Find Sanctuary In Louisiana. But The Move Can Be Tough : Shots - Health News Lab chimps used in medical studies are being retired to a forested sanctuary. But scientists and workers who care for the animals say some older chimps aren't healthy enough to make the transition. 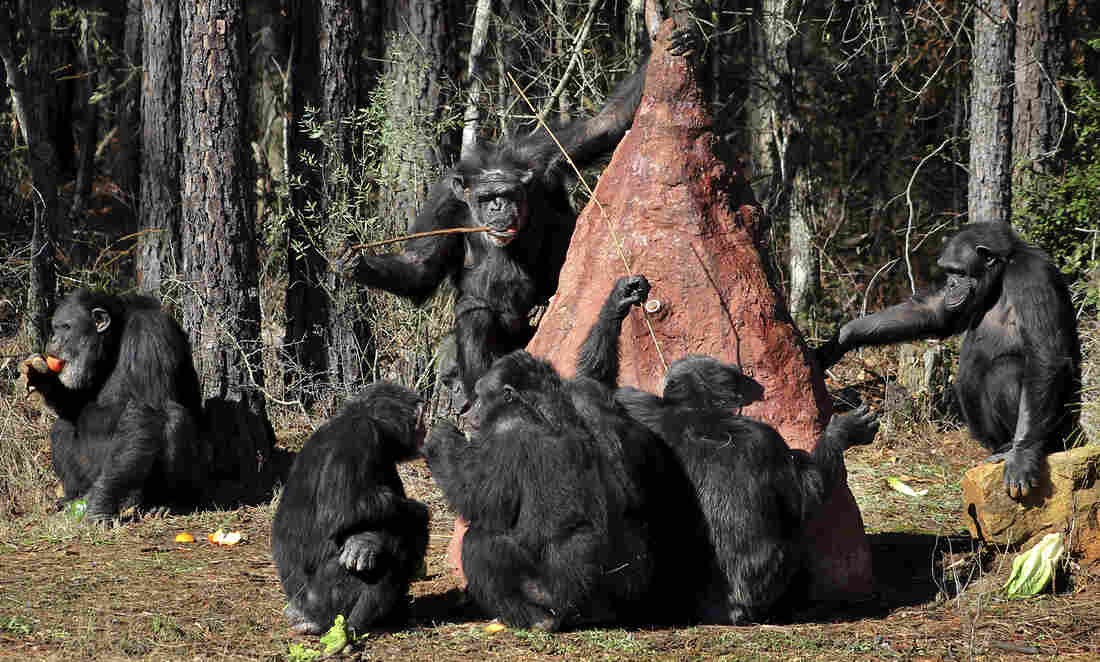 Chimps use sticks to poke into a mock termite mound to taste a sweet substance placed in the mound by keepers at Chimp Haven in Keithville, La. Today, caretakers say, more chimps in the U.S. live in accredited animal sanctuaries than in research facilities. Janet McConnaughey/AP hide caption 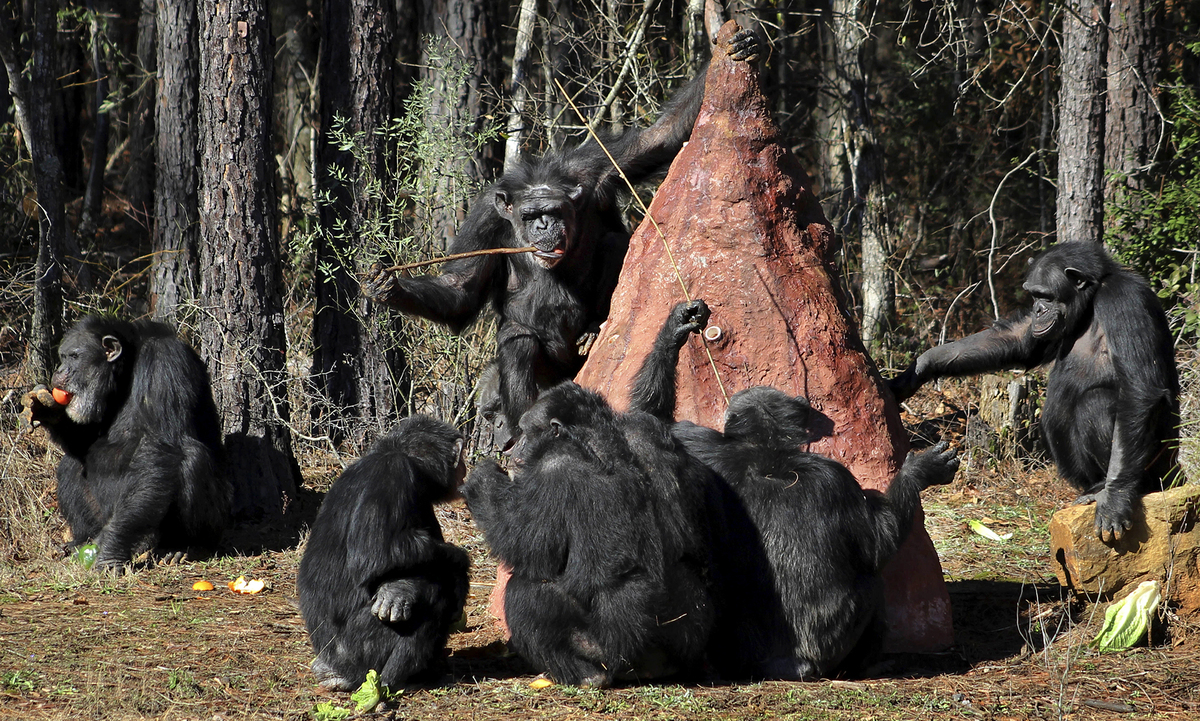 Chimps use sticks to poke into a mock termite mound to taste a sweet substance placed in the mound by keepers at Chimp Haven in Keithville, La. Today, caretakers say, more chimps in the U.S. live in accredited animal sanctuaries than in research facilities.

Sarah Anne, a 59-year-old chimpanzee, is famous enough to have her own Wikipedia page. That's because she was captured from the wild as an infant and raised in the home of a language researcher who taught her to use symbols for words. These days, she lives at Chimp Haven, a wooded sanctuary for former research chimps in Louisiana, along with a new pal named Marie.

"And Marie loves to groom with Sarah, and follows her around and gives her lots of attention. And we're seeing Sarah play with her and just being much more sociable," says Amy Fultz, who studies animal behavior and co-founded Chimp Haven in 1995. "At 59, that's a really cool thing to be able to see and watch."

Their friendship shows that even very old chimps can grow and change. But it's more than just a big deal for Sarah Anne. The arrival of Marie, along with some other chimps from a research facility in New Mexico, tipped the scales in terms of where most chimps live in this country.

"There are more chimps in accredited sanctuaries than there are in research facilities now," says Rana Smith, the president of Chimp Haven.

That means the retirement of research chimps has reached its endgame — and this final stage is proving to be unexpectedly challenging. In 2015, the National Institutes of Health announced that the era of chimp biomedical research was over, and that all of its chimps remaining in research labs — nearly 400 at the time — would gradually be transferred to Chimp Haven.

The trouble is, more than half of NIH's roughly 270 chimps remaining in labs today have chronic health conditions that could be exacerbated by the stress of the move.

"The chimp population that is supported and owned by NIH is quite old, and they acquire a lot of the same problems that we do: heart disease, kidney disease, diabetes," says Dr. Jim Anderson, an NIH official who is managing chimp retirement. "There may be a few that are just too frail to move. And how do you approach that? How do you think about that?"

Earlier this year, an NIH advisory group recommended that all chimps should go unless the relocation is "extremely likely to shorten their lives." And if there's any dispute about whether or not a chimp is healthy enough to go, the advisers said that independent veterinarians should weigh in.

The NIH accepted public comments on these recommendations through mid-August, and the agency's director is expected to soon announce a decision about how to move forward. The stakes are huge, both for the chimps and for the people who care for them.

"These people have been with these animals forever, and the bond is a very long one and it's very deep," says Robert Lanford, director of the Southwest National Primate Research Center at the Texas Biomedical Research Institute in San Antonio. He notes that many of the chimps were born at the center, and that their caretakers are like family.

"In the beginning," he says, "the vast majority of our behavioral and veterinary staff did not want to see any of the animals moved."

Over time, he says, they've come around to the idea. Now Lanford and others at his facility are in favor of sending the chimps to sanctuary — at least, most of the chimps. The NIH has about 80 chimps here, and Lanford says 7 of them need to stay.

"Behaviorally, emotionally and physically, these animals have severe problems," says Lanford. "We have an animal that's blind that is taken care of by its two cagemates. How do you recreate that at Chimp Haven? I'm not criticizing Chimp Haven — it's just that there are some animals that should not be moved."

Lanford believes the priority should be to relocate NIH chimps with early stage disease to the sanctuary, so they can make the transition while they're still healthy enough to do so. He thinks that should happen while the deliberations about the most at-risk animals continue. 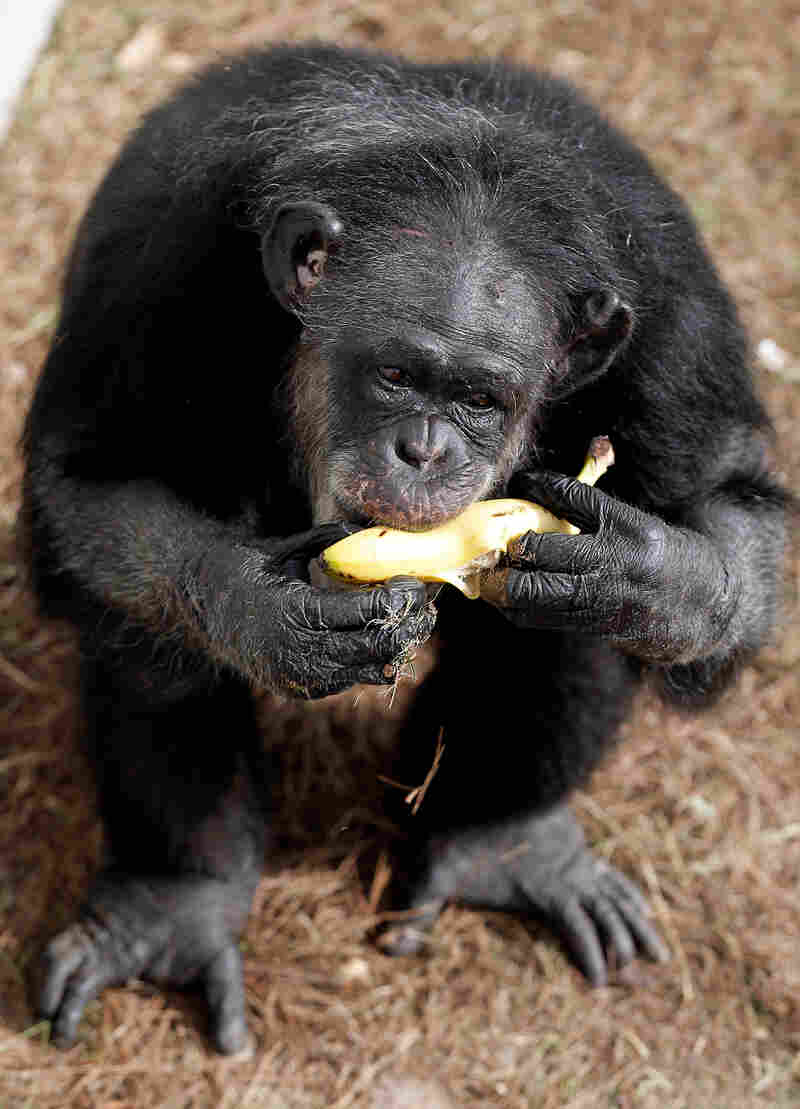 Queenie arrived at Chimp Haven in 2014. The private, nonprofit sanctuary has cared for well over 300 chimpanzees since its inception, and is currently home to more than 200. Brandon Wade/AP Images for The Humane Society hide caption 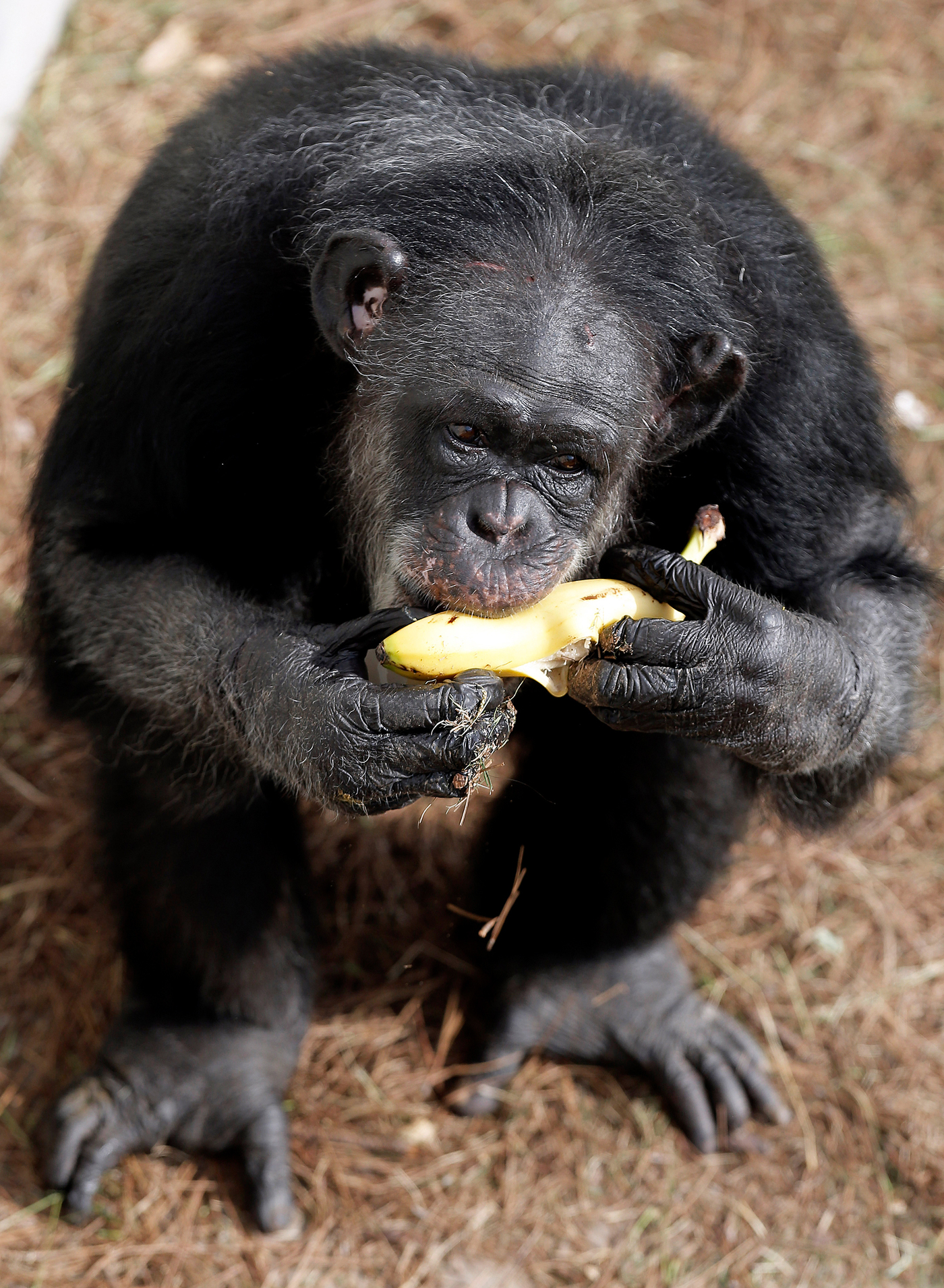 Queenie arrived at Chimp Haven in 2014. The private, nonprofit sanctuary has cared for well over 300 chimpanzees since its inception, and is currently home to more than 200.

The drive to the primate sanctuary in Louisiana takes hours, and, for safety reasons, the chimps have to be alone in small cages. She can't explain to them where they are going or what will happen.

One terrified chimp refused to take important medicine. "There are individuals that I think would have a really hard time and might not even make it through the transport," says Vazquez.

Her colleague Sabrina Bourgeois agrees. "I do worry about some of them," she says. "I think people hear the word 'sanctuary' and they think every animal is going to just be so happy."

Bourgeois, a research associate at Southwest, thinks for some of the chimps, the transition could be traumatic, especially ones who are strongly bonded to their caretakers.

The cages and enclosures at this research center don't look all that different from some at Chimp Haven. But the chimps at Southwest live in much smaller groups — maybe just a pair, or three or four together, while Chimp Haven has groups as large as 21 chimps. What's more, the Texas research facility doesn't have the natural environments for chimps that the 200-acre sanctuary in Louisiana has available, such as small forests bordered by moats.

Because the Texas facility has thousands of baboons and monkeys, however, keeping a small number of elderly or frail chimps around wouldn't be difficult, in terms of staffing or care.

That's not the case at the Alamogordo Primate Facility, which houses more than 60 NIH chimps at a U. S. Air Force base in New Mexico. As its chimps get transferred to Chimp Haven and the numbers of animals dwindle there, it will become increasingly expensive to maintain the necessary veterinary and behavioral staff; the facility has no other primates.

Anderson says that NIH officials have considered the possibility that Alamogordo might end up with a few high-risk animals left, and says the government will make sure that the chimps can stay in-place for as long as needed.

"We would continue to support a facility to provide excellent care for them even if there were small numbers," says Anderson, who notes, "if we've deemed them too dangerous to move, I'm not sure what the option would be."

The risks of moving a chimp always have to be weighed against the possible benefits, says veterinarian Raven Jackson-Jewett, at Chimp Haven.

"Risks are inevitable. We know, undertaking this process of chimpanzee transport, we're never going to have a risk of zero," says Jackson-Jewett. "The benefit is what we can afford them in a life of sanctuary."

To Fultz, the ideal life for a chimp involves choices and novelty, and the Chimp Haven is set up to provide that.

"Chimp Haven really believes that only the frailest of chimps are those that should potentially remain," says Fultz, because the primate sanctuary has a track record of being able to care for animals with physical and emotional problems that might have raised questions about their ability to start a new life.

As an example, she cites Joseph, a 38-year-old chimp who spent more than 10 years living alone in a cage. "We were able to integrate him into a group of over 10 chimpanzees," says Fultz. "He's done wonderfully, socially. He has group mates that he plays with now."