Accessibility links
Parents Of Twins Run Higher Risk Of Depression Than Other New Parents : Shots - Health News Expectant parents of twins and other multiples may be ready for the joy and extra physical demands of caring for more than one baby. But few know the risk of depression and anxiety runs higher, too.

Pssst: Parenting Twins Can Be Depressing

Pssst: Parenting Twins Can Be Depressing 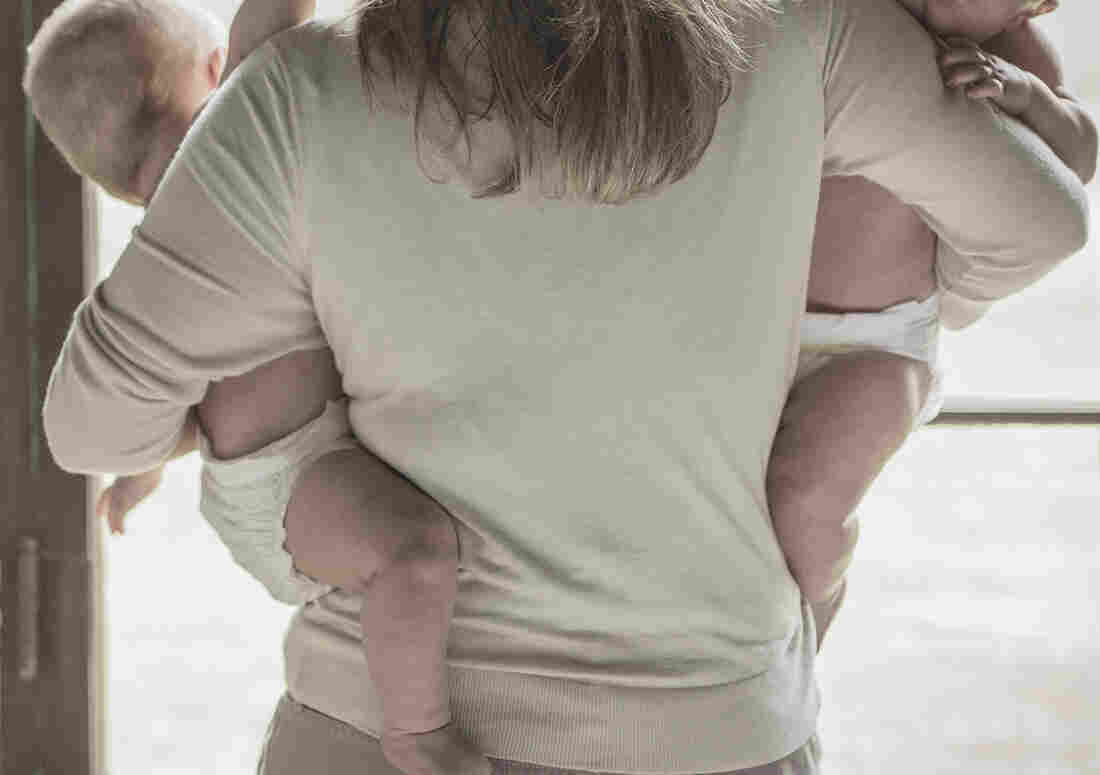 Some research suggests that having multiples increases a parent's risk of mental health concerns â like depression and anxiety â before and after the children are born. Don't be afraid to admit it, parents advise. Emotional support can help. Terry Vine/Getty Images hide caption

In 2014, when Crystal Duffy found out she was pregnant with twins, she felt shocked and overjoyed. "Twins run in our family," says the Houston resident, who was 33 at the time, and already the mom of a 2-year-old. "But we still weren't prepared for the news."

Duffy had hoped for a joyful twin pregnancy. But during her second trimester, she began having complications.

"I had a very high-risk pregnancy, and my twins were born premature," she explains. "They spent five weeks in the neonatal intensive care unit. It was a very stressful time. I felt anxious and traumatized."

While the doctors had told Duffy that twin pregnancies could be precarious for her and her babies' physical health, they didn't mention that some research suggests that having multiples also increases a parent's risk of mental health concerns — like depression and anxiety — after the children are born.

According to a draft report and statement issued this week by the U.S. Preventive Services Task Force, 8.9 percent of all pregnant women and 37 percent of new mothers experience clinical depression in the months before or after giving birth. (Less research has been done on new fathers, but some studies suggest that about 10 percent of dads may also succumb to postnatal depression.)

But, for parents of twins or other multiples; there's good evidence that the percentage who experience depression may be much higher. A 2009 study, published in the journal Pediatrics found that new moms of multiples were 43 percent more likely to have postpartum depression than were mothers of singletons.

In a survey published in May in the Journal of Psychiatric Practice, parents who'd had at least one multiple birth told researchers they experienced the most difficulty during the first three months of their babies' lives. For that study, 244 parents of twins and other multiples (including 197 mothers and 44 spouses or partners) completed a series of questionnaires that asked about their mental health during the postpartum period. (About two thirds of the kids in question were over age 5 at the time their parents were surveyed).

The researchers found that although 48 percent of the study participants had struggled emotionally after their babies were born, few got help.

"For the parents in our study, anxiety and stress were the most pressing challenges," says Susan J. Wenze, the assistant professor of psychology at Lafayette College in Easton, Penn., who led the study. "However, less than 10 percent of these individuals received professional help."

The parents in Wenze's study told her and her colleagues that caring for multiple babies at once, finding childcare, and financial stress made finding a therapist or a support group seem like just one more burden.

Exhausted parents of multiples may question whether psychotherapy can lessen their feelings of distress, but the USPSTF report published this week cites evidence suggesting that specific types of counseling — like cognitive-behavioral therapy (a form of therapy aimed at altering upsetting thoughts and behaviors) and interpersonal psychotherapy (a type of time-limited, insight-oriented treatment) can help women recover from maternal depression.

While Duffy never sought professional help for her struggles, she says lining up family support helped bolster her emotional well-being.

"Because the sleep deprivation is severe, parents of multiples often need assistance beyond their babies' first few months of life. If grandparents and family members can sleep over to help with nighttime feedings and diaper changes, it can make a world of difference," Duffy says.

And even if expectant parents of twins have read all about the physical demands of parenting two babies, therapists who coach these adults say they are often less prepared for the emotional dilemmas.

These mothers often compare themselves to parents of single infants, and say they feel guilty about not having as much time to bond with each child, she says.

"Because parenting twins is much harder than caring for one baby, moms can feel a sense of maternal loss when they don't experience the yummy 'mommy moments' they had hoped for."

It can be different for dads

A father's experience in these cases may be different from his partner's, she says, especially if he's not the primary caregiver.

"Dads of single babies can feel excluded from the mother and baby bond, but fathers of multiples have more opportunity to be involved — which can help them feel needed. However, if dads aren't ready for this level of responsibility, relationship tension can mount."

Breastfeeding adds its own complications. Jennifer Chen, a 39-year-old mother of twins in Los Angeles, says she struggled to breastfeed her daughters. "Having difficulty nursing my babies took a mental toll," she says. At times, the stress felt insurmountable."

Chen attended one meeting of a breastfeeding support group, and didn't return. Surrounded by mothers of single babies, she felt like no one in the group understood her difficulties.

"I was trying to tandem breastfeed and pump milk for two babies," she says. "Feeding my twins was a production that not every mother experienced. I didn't feel excluded from the group, but I felt isolated."

Wenze says it's crucial for anyone expecting twins, triplets or more to develop a support network with other parents of multiples from the get-go — whether in-person or online.

Duffy found guidance through a website, Twiniversity which provides parenting forums, live and online classes for parents of twins, and a peer mentorship program. Started by Natalie Diaz, a mother of twins, the site serves as a community hub, connecting families of multiples with each other.

Finding a 'tribe' of parents who get it helps

"Twiniversity introduced me to my 'Mom Tribe,' says Duffy. "They reassured me that my motherhood worries were normal and that everything was going to be OK."

Building that community early pays dividends later. While the early years of caring for multiples can be particularly taxing; twin-related challenges don't vanish as the kids get older — they just change.

Through My Sister's Eyes: Allison And Katie Crutchfield On Each Other's Music

"During the twins' middle school and teen years, their social world expands — which can cause conflict between them to increase," says Simon.

One twin is sometimes more popular than the other, she says, which can stir a special brand of pain if the kid's sibling feels excluded from their twin's new life. Some parents have a difficult time navigating this terrain; simultaneously supporting one child's independence while empathizing with the other's loneliness.

It's especially vital for parents of multiples to confide in each other throughout their parenting journey, says Simon. Remind your your spouse and kids that you're all in this together.

"Everyone feels relieved," Simon says, "when they recognize that they're struggles are not unique, and that they're not alone."