Accessibility links
Justice Department Warns Safe Injection Facilities Won't Be Tolerated : Shots - Health News A standoff is heating up between the Trump administration and local leaders who are trying to open facilities where people can use opioids under the eye of medical staff. 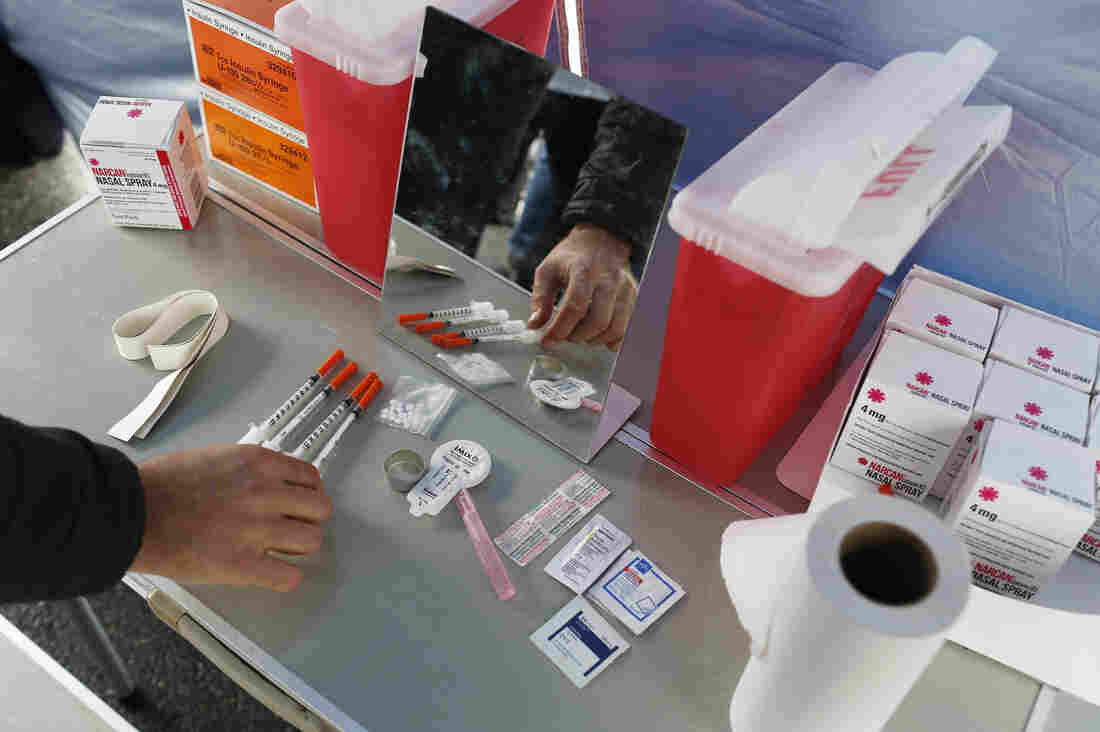 A visitor to the Harvard School of Public Health's mock safe injection setup checks out the items on the demonstration table set up underneath a tent on the quad near the medical school in Boston on April 30, 2018. Jessica Rinaldi/Getty Images hide caption 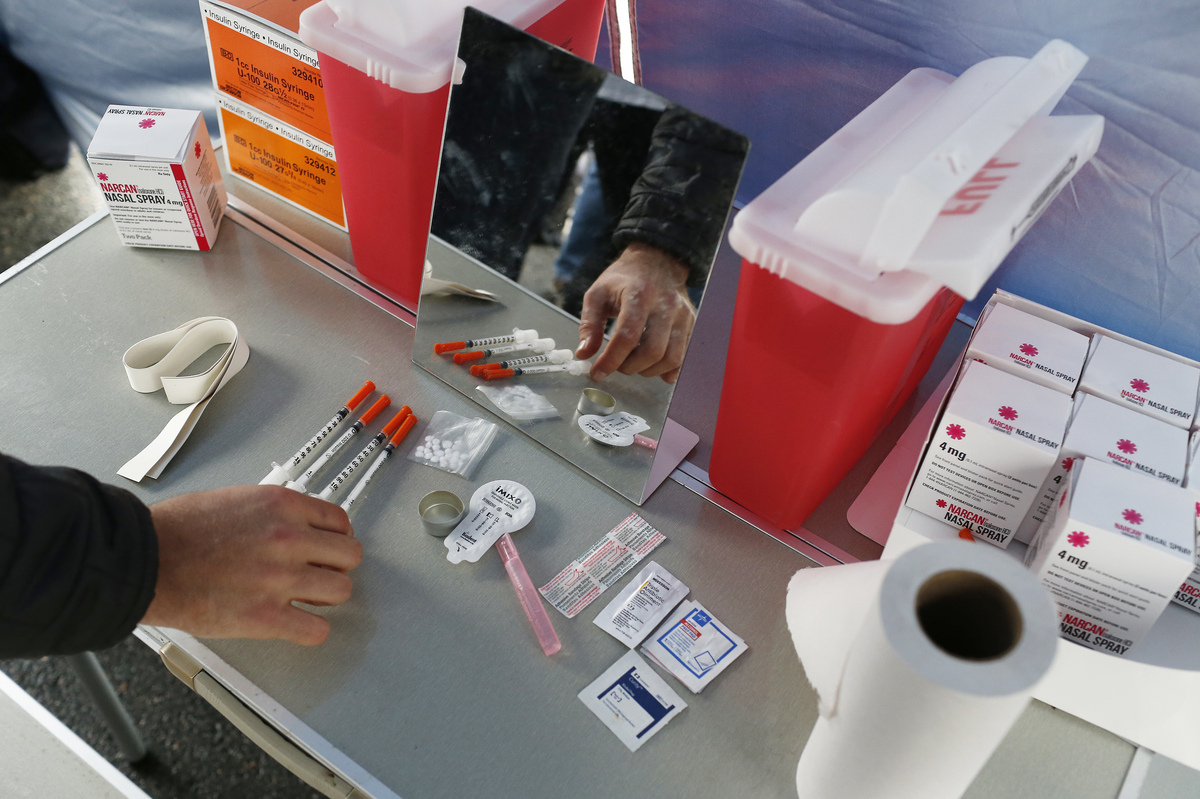 A visitor to the Harvard School of Public Health's mock safe injection setup checks out the items on the demonstration table set up underneath a tent on the quad near the medical school in Boston on April 30, 2018.

A top Justice Department official is putting cities considering medically-supervised drug injection facilities on notice: If you open one, prepare for swift and aggressive legal action.

With record numbers of fatal overdoses, several cities are working on plans to launch facilities where people can inject illegal drugs with staff on hand to help them if they overdose. Now, however, the Trump administration is vowing a major crackdown.

In an interview with NPR, U.S. Deputy Attorney General Rod Rosenstein said he understands city leaders are desperate to curb the mounting overdose deaths, but there is one problem: providing a place for people to use heroin and other illegal substances is a violation of federal law.

"I'm not aware of any valid basis for the argument that you can engage in criminal activity as long as you do it in the presence of someone with a medical license," Rosenstein says.

City officials in Philadelphia and San Francisco say they are moving forward with their plans, despite the threats.

In California, state lawmakers recently passed a bill awaiting the governor's approval that would advance a three-year supervised injection site pilot program. San Francisco Mayor London Breed says the Justice Department putting cities on notice should not make them back down, given the worsening overdose problem.

"There is strength in numbers," Breed said at a press conference. "And we are talking to other cities who want to consider this as an option. I mean, here in other cities like New York and Seattle, we are trying to address the crisis."

The view from Washington is different.

"Just because someone tells you in San Francisco that San Francisco is not going to prosecute you for doing something, that does not make it legal. It remains illegal after federal law," Rosenstein says. "If anybody thinks this is a good idea, there's a way to accomplish that: try to persuade the U.S. Congress to legalize it."

His advice to mayors and other top local elected officials? Consult your lawyers about all legal repercussions.

That could mean criminal prosecution.

U.S. attorneys in Philadelphia and Vermont have come out strongly against supervised injection sites. But Rosenstein's comments mark the first time a high-ranking Department of Justice official has weighed in on the controversial sites that Philadelphia and about a dozen other jurisdictions are considering in response to the worsening opioid crisis.

No matter how severe the crisis gets, Rosenstein says inviting people into a space and permitting them to use dangerous drugs there is a troubling notion. It may, in Rosenstein's view, even accelerate the problem.

"This is not a disease that gets spread like the flu," Rosenstein says. "People can only become addicted if they have access to these illegal drugs. And so if we can prevent that access, we can prevent the addiction."

But supporters point to the latest grim federal statistics as evidence of why the sites are a necessary tool to help save lives. More than 72,000 Americans died from overdoses last year, exceeding any one-year death total during the AIDS crisis.

In Philadelphia, more than 1,200 people died of drug overdoses, most fueled by opioids, last year. That is about 35 percent more than the deadliest days of the AIDS epidemic, says Philadelphia Health Commissioner Dr. Thomas Farley.

"This would be the worst public health crisis in a century," Farley says.

He says just as public health officials realized syringe exchanges worked to save lives during the worst years of the AIDs epidemic, "likewise, now, we know there are a lot of needless death from drug overdoses and we know we can save lives because the evidence is clear that these facility save lives."

Farley recalls the early backlash to needle exchange programs, and hopes that the criminal justice community will gradually come around to the idea of supervised injection sites.

While the research is still preliminary, most studies show that the supervised injection sites can drive down fatal overdoses. These sites are credited with containing the spread of infectious diseases. And advocates say the facilities help move more people into treatment. The American Medical Association has endorsed launching supervised injection site pilot programs.

"Nobody likes the idea of watching someone who is addicted just inject drugs. We want to get all of those people into treatment, but we all have to recognize that, despite all of our efforts, many people are not going to drug treatment," he says.

Farley worries that if the Justice Department's threats spread widely enough people will be too scared to show up when the city's site does open.

"If the message is clear that, if you walk in this facility you're going to be arrested, people wouldn't be using that," Farley says. "But that is not what is happened currently with syringe exchange, and that's the sort of accommodation we hope we can set up with an overdose prevention site."

Rosenstein says he "wouldn't speculate" on what exactly the enforcement would look like or who might be arrested, but he says options include suing under the Controlled Substances Act to get an injunction, or even pursuing criminal charges depending on the circumstances. He says federal officials are watching cities that advancing injection site plans.

"If local governments get in the business of facilitating drug use ... they're actually inviting people to bring these illegal drugs into their places of business," Rosenstein says. "If you start down that road, you're really going to undermine the deterrent message that I think is so important in order to prevent people from becoming addicted in the future."

But for public health leaders like Farley, the bottom line is that lives are at stake and supervised injection facilities could help.

"In a crisis like thus, with this many people dying as we have, it's worth a try," says Farley.