Accessibility links
Toxic Brew Of Smoke And Exhaust Settles Over Neighborhoods In California's Heartland : Shots - Health News Low-income residents living near highways and agricultural and industrial zones are getting hit with a "double whammy" as wildfire smoke drifts to areas where the air is often polluted already. 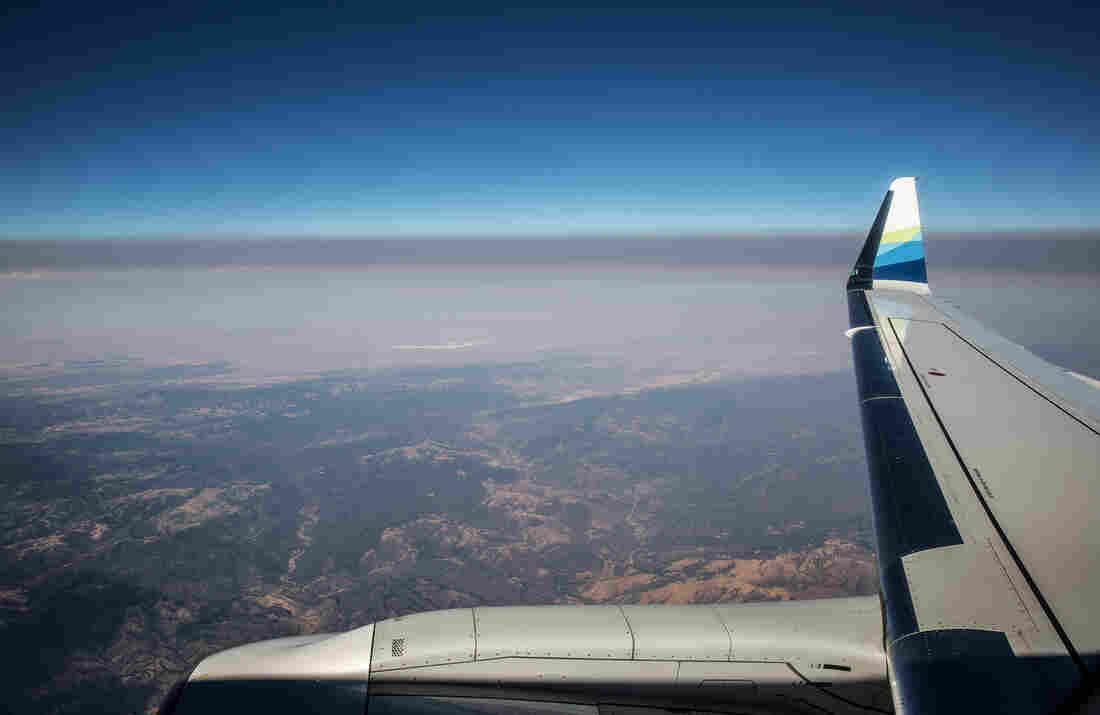 A thick layer of smoke from the Carr Fire settles over California's Central Valley in a view from a jet earlier this summer. Fine particulate matter from drifting wildfire smoke mixes with industrial ozone and can become trapped between the mountain ranges. George Rose/Getty Images hide caption 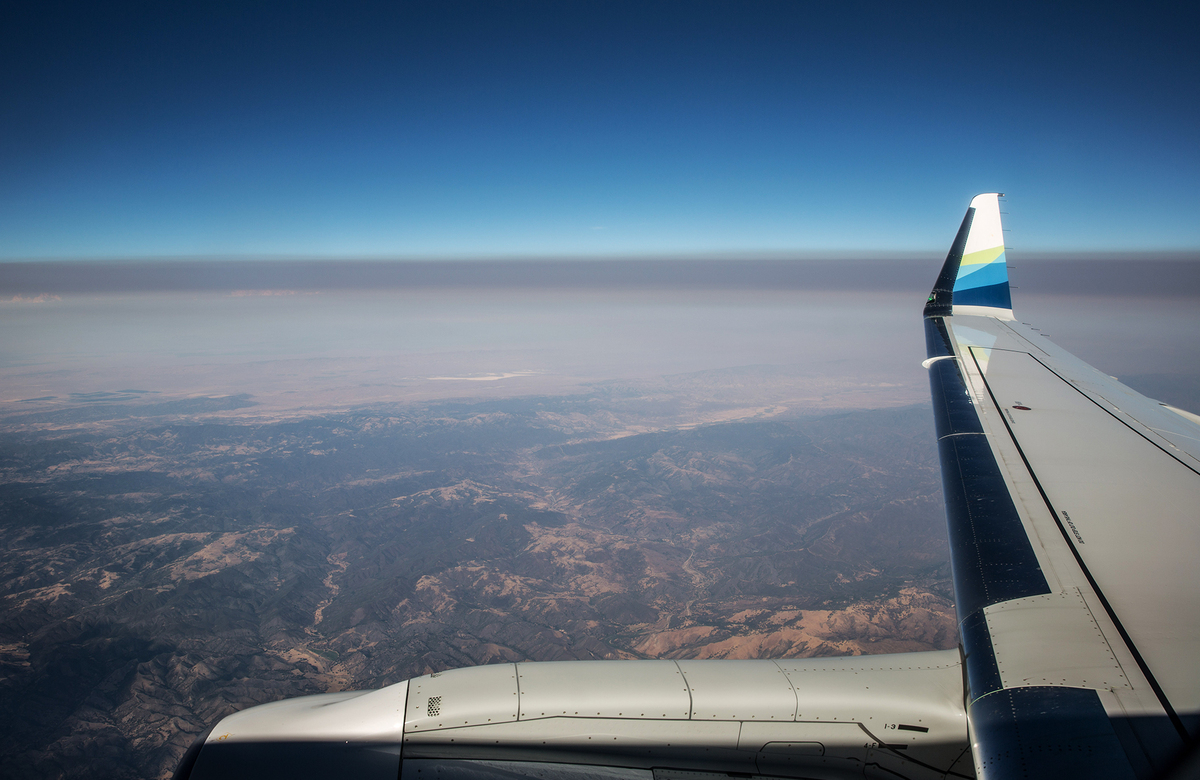 A thick layer of smoke from the Carr Fire settles over California's Central Valley in a view from a jet earlier this summer. Fine particulate matter from drifting wildfire smoke mixes with industrial ozone and can become trapped between the mountain ranges.

Viviana Aguirre, 14, knows the air is bad when she has to reach for her inhaler once, maybe twice a week.

The air in her low-income neighborhood in East Bakersfield, Calif., has been thick with smoke for weeks, she says, forcing her to remain indoors most of the time. It's hard to tell, she says, whether the smoke is coming from the usual controlled burns in the farmers' fields surrounding her home — or from the record-breaking wildfires blazing to the north and south of her.

"I do see smoke," Viviana says. "But I see smoke most of the time."

People like Viviana and her family are hit disproportionately when wildfires ignite — because smoke adds another layer of toxic substances to the already dirty air, researchers studying the issue say.

"Without a doubt, these communities are at higher risk" when fires break out, says Emanuel Alcala, a health statistician and postgraduate fellow with the Central Valley Health Policy Institute at California State University, Fresno. "Especially because you already have other environmental hazards: toxic waste sites, poor quality of water, and sometimes no air conditioning."

More than a dozen major blazes still are raging across California, including the Mendocino Complex fire in the northern part of the state that has charred nearly 460,000 acres and is now the largest in the state's recorded history.

Fires are also burning in Colorado, Oregon, Washington and Idaho. Smoke from these blazes has drifted as far as Ohio. Portions of northern Nevada in July recorded some of their worst ozone pollution ever, because of the fires, and officials across the West have issued health warnings to alert sensitive groups — such as young children, older adults and people with respiratory diseases — to the potential risks.

In neighborhoods like Viviana's, which lies within a few miles of dairy farms, packing sheds and oil fields, particulate and ozone pollution already poses a health threat. The air is sullied by a constant, diesel-spewing stream of big rigs as well as by pesticides and dust from agricultural operations.

"When I go outside just to hang out with my friends, I start coughing and I have to come back in," Viviana said.

About 26 percent of school-age children in the San Joaquin Valley, California's agricultural heartland, have asthma — the highest rate in the state, according to California Health Interview Survey.

Cities in the valley top the list of those with the worst air pollution in the country, according to the American Lung Association. The valley is also home to some of the state's poorest communities: Seven of the 10 California counties with the highest child poverty rates are there, according to a 2017 report by the San Joaquin Valley Health Fund.

"The geography and climate of the valley can trap unhealthy air for days, if not weeks," says Will Barrett, clean-air advocacy director for the American Lung Association in California.

The combination of industrial ozone and fine particulate matter from wildfire smoke becomes trapped between the mountain ranges surrounding the valley and pushes air quality to dangerous levels. "You're combining two of the most widespread and pervasive pollutants," Barrett says. "It really is a double whammy."

Garcia considers herself healthy, but she says a persistent cough this summer left her gasping for air.

She compares some of her recent symptoms — such as chest pressure and headaches — to those experienced by her adult son, who has asthma.

"My guess is it's probably the smoke," Garcia says.

Other regions in the state also are suffering. Smoke from the nearby Mendocino Complex fire has drifted into the San Francisco Bay Area, about a three-hour drive south of the flames.

"Kids on Medi-Cal have more asthma," says Mary Frazier, a registered nurse and project director of the Northern California Breathmobile program. "It can be because they are exposed to more triggers. They live in low-income housing, which has some poor indoor-air quality and the houses are near freeways or industry."

When she starts visiting kids again in September after classes resume, Frazier expects to encounter many children who have been coughing and wheezing because of the smoke.

Back in southwest Fresno, Gary Hunt, 54, has remained mostly housebound this summer, leaving home only for important errands and medical appointments. Even then, he wears a mask.

Pollution from fires is "definitely making a drastic difference," Hunt says, worsening his asthma and plaguing him with more fatigue, chest pain and headaches.

But extinguishing wildfires won't guarantee relief. There is a meat-rendering plant near his home, and busy state Route 41 is about a quarter-mile away. Both bring trucks — and the pollution they emit — into his neighborhood.

"Because of where we are, we don't really get a break," Hunt says.

Three years ago, Hunt had a severe asthma attack that sent him to the hospital. He had to leave his job as a school maintenance worker and lost his job-based insurance. He enrolled in Medi-Cal but soon learned that not all doctors accept public insurance — which means that getting quick access to care during fire season can be a problem.

For instance, he says, he needs to see a pulmonologist — but has to wait three months for an appointment.

People who rely on Medi-Cal or those without insurance can in some cases wait up to a year for treatment, says Kevin Hamilton, a respiratory therapist and the CEO of the Central California Asthma Collaborative.

Hunt says he is frequently asked, even by physicians, why he and his family don't move to a healthier community. The answer is that he simply can't afford to move.