Accessibility links
Why Do Kids Vomit So Much? (And When Should You Be Worried?) : Shots - Health News Why do children throw up so often and so colorfully? When should parents be worried? All your childhood vomit questions answered.

The Queasy Truth About Why Kids Are So Prone to Vomiting

The Queasy Truth About Why Kids Are So Prone to Vomiting 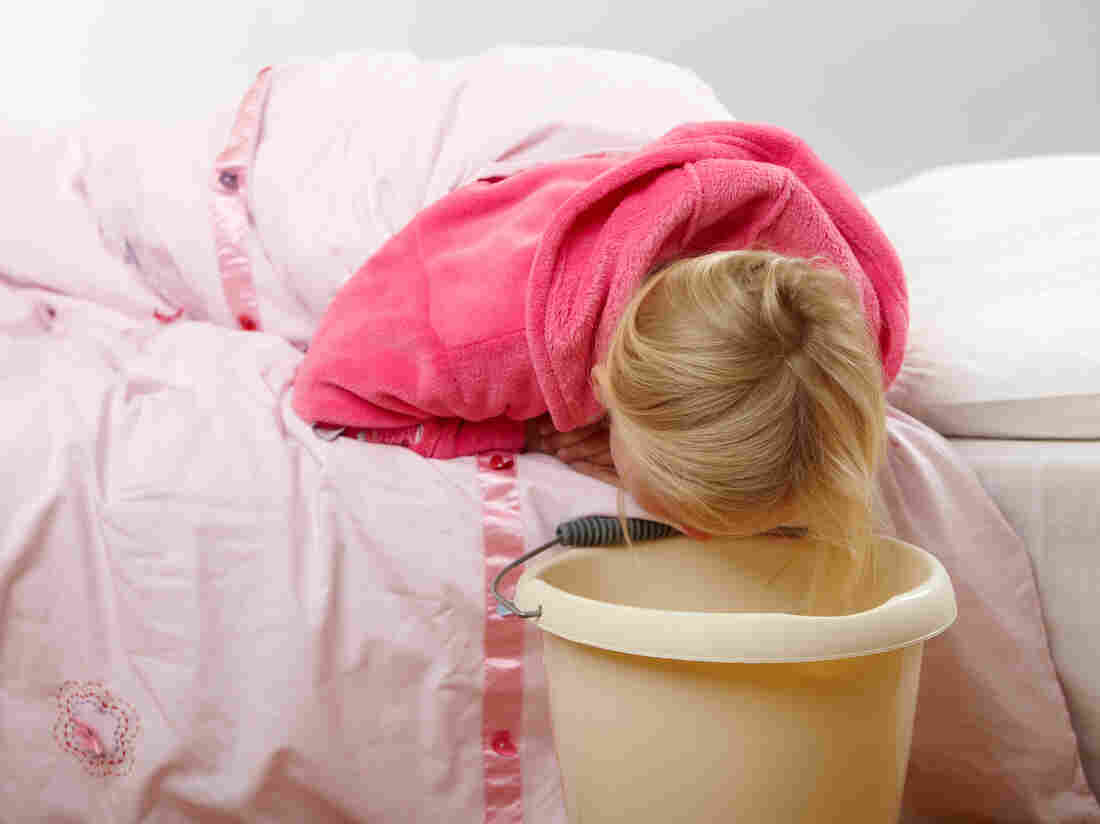 Children's vomiting reaction is easily triggered and sometimes all parents can do is hold back their hair and wait it out. Image Source/Getty Images/Image Source hide caption 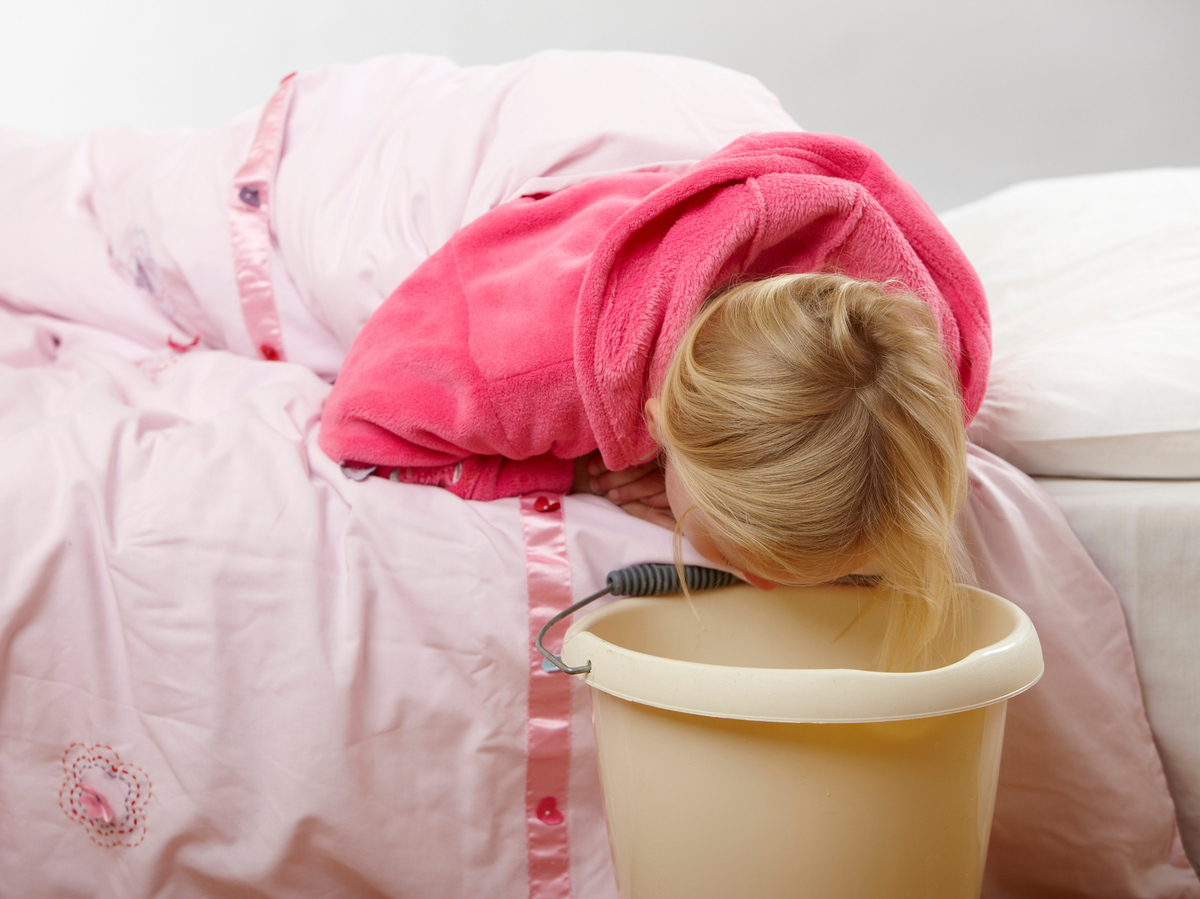 Children's vomiting reaction is easily triggered and sometimes all parents can do is hold back their hair and wait it out.

When Linda Tock heard her 5-year-old telling her he was going to be sick, she moved quickly. She sprinted for a trash can, ready to run upstairs to help her son, with her husband, Simon, close behind her. Then it happened: a rain of vomit from the balcony above. "I put the trash can over my head," Tock recalls. "We just got showered." Puke splashed onto every surface — and even into her unlucky husband's open mouth.

The Tocks' experience has been shared by parents around the world. Sometimes, kids seem to vomit at the drop of a hat, causing parental panic. But when is it just a messy inconvenience and when do you need to get the doctor involved? And why do kids throw up so much, anyway?

The mechanism of vomiting, or emesis, is the same in kids and adults. It can be stimulated by a variety of things, from a virus irritating the stomach lining, to disgust or surprise, to the motion of a car or a boat. But in kids it can be a hair-trigger reaction.

When the brain experiences stomach-upsetting stimuli, nerve fibers, also called afferents, send signals to the body to expel what's in the stomach. The body then pulls off the physical equivalent of a perfectly timed set of dance moves. After a deep breath, the glottis, the opening between the vocal folds, shuts. The larynx and upper palate rise up to make room for what's about to occur. Then, the diaphragm pushes down forcefully. The negative pressure it creates inside the body opens up the esophagus, where food goes into the body. At the same time, the abdominal walls squeeze the stomach. Voila! It's time to barf.

Kids receive the same vomit-worthy signals and their bodies perform the same carefully coordinated set of preparatory motions as adults. So why do they hurl so much more?

You might think that children's sensitive immune systems make them more prone to stomach bugs, and that's true. But there's more to it: Their bodies send, and listen to, afferent signals for all kinds of other physical problems. As a result, children may vomit in response to things that wouldn't make an adult blink: a stubbed toe, for example, or a fever.

"Anything that makes a child sick can make them vomit," says pediatric gastroenterologist Katja Kovacic. "There are numerous, numerous causes." Though gastroenteritis, or the stomach flu, is the most common cause of vomiting in children, vomiting doesn't always point to the stomach flu.

If a child vomits, the best thing to do is help them get comfortable and keep an eye on their fluid intake to prevent dehydration. Sounds simple, but when should you go to the doctor? Troubling signs include lethargy, severe stomach tenderness, a distended stomach, or severe pain of any kind, says Kovacic. Rapid-fire vomiting or vomiting that doesn't clear up after a day or so is also cause for concern: Both can lead to severe dehydration.

For Boston-area pediatrician Daniel Summers, red flags can often be found in the vomit itself. Parents who find "something other than the stomach contents you'd expect to find," he says, should seek medical attention immediately. Watch out for blood, dark green bile, or even fecal matter, which can get into vomit from an obstructed bowel.

Even if it's a stomach bug that's likely to pass quickly, a pediatrician can help by prescribing anti-emetic drugs like ondansetron (Zofran), which was originally developed to quell vomiting in chemotherapy patients. Putting a halt to the barf cycle can prevent dehydration and help keep a child out of the hospital, says Summers, not to mention making them more comfortable. If your child is taking an anti-emetic drug, he warns, it's still important to go slowly when it comes to diet, eating small amounts and starting with bland foods, just in case the causes of the vomiting outlast the anti-vomiting prescription.

Hydration is key, too. Parents should avoid sugary beverages in favor of ones that have electrolytes, like Pedialyte or lower-sugar sports drinks. If your child stops urinating or cries without tears, he or she could be seriously dehydrated and it's time to seek emergency attention.

In some cases, vomiting is a sign of something more serious, like cyclic vomiting syndrome. Watch out if your kid experiences repeated episodes of vomiting that last for hours or even days. "It's a tough disorder," says Kovacic, who studies the condition. It's not clear what causes cyclic vomiting, but once a pattern is identified, patients can be treated with anti-migraine drugs. The condition is linked to migraines and can evolve into migraines in older patients.

Above all, say both physicians, it's important for parents to trust their instincts if they think their kid's vomiting is more than just a stomach bug. "I usually say Mom is always right," says Kovacic. "If a parent has a hunch that something is wrong with their child, we have to go along with that sense."

An earlier version of this story defined afferents as "stomach-upsetting stimuli." Afferents are actually nerve fibers that can stimulate vomiting.