Accessibility links
Bonobos Share Food When Chimps Won't — More Evidence That Bonobos Are 'Pro-Social' : Shots - Health News Bonobos are much more likely than common chimpanzees to share their food, a study suggests. But researchers who study sharing say human kids are more helpful and cooperative than either species. 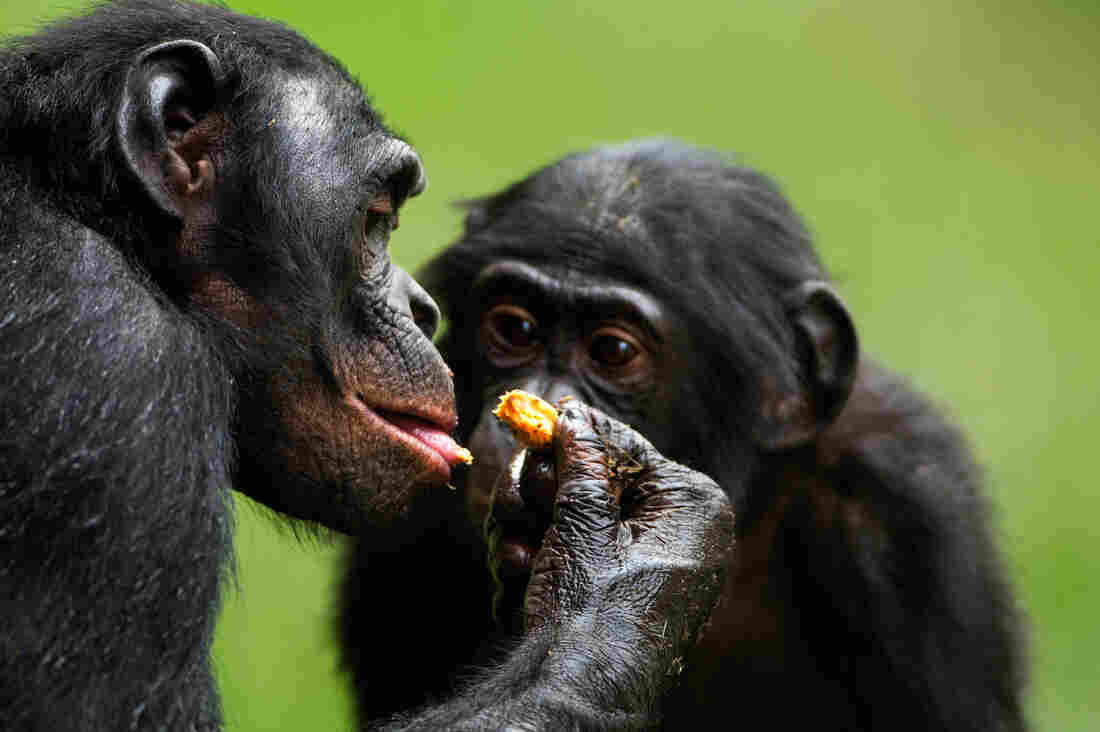 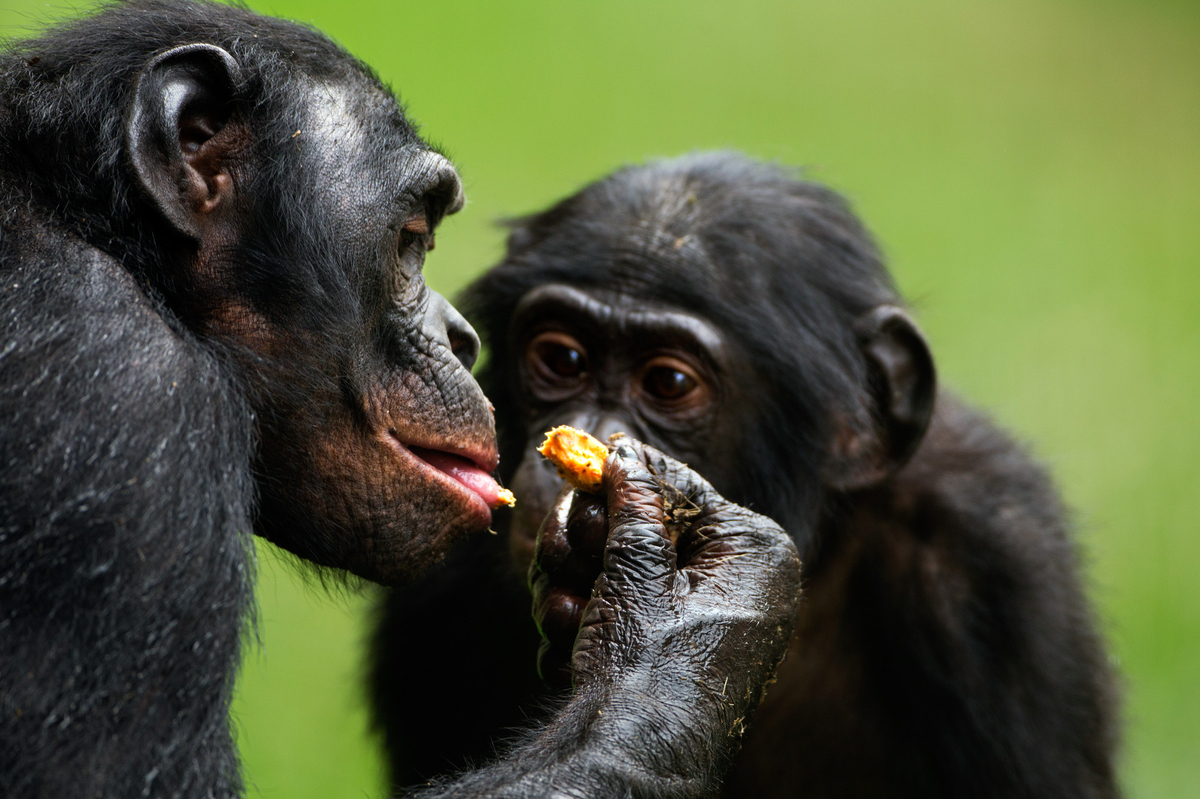 A 17-year-old male bonobo eats while his son watches in the Lola Ya Bonobo Sanctuary, Democratic Republic of Congo.

An intriguing study published this week suggests that bonobos, among the closest relatives to humans, are surprisingly willing to hand over food to a pal. But they didn't share tools.

The discovery adds a new wrinkle to scientists' efforts to understand the evolutionary origins of people's unusual propensity to help others.

"One of the things that is really striking about humans is how cooperative or helpful we are," says Christopher Krupenye, an evolutionary anthropologist at the University of St. Andrews in Scotland. "It's just a really pervasive element of our behavior."

Do Bonobos And Chimpanzees Offer A Path To Understanding Human Behavior?

Common chimpanzees (a related species that diverged from bonobos about 2 million years ago) do engage in some altruistic behavior. For example, it's been shown that chimps will hand a tool that's out of reach to a person who clearly is trying to get it — as will human children. So Krupenye and some colleagues recently repeated that experiment with bonobos in a sanctuary.

"Bonobos didn't help at all," says Krupenye. Instead, sometimes they would retrieve the tool but still keep it out of reach, showing it off in a teasing way. "They didn't help, in this particular context."

Then he and his colleagues did another set of experiments that involved palm nuts, which the bonobos typically crack open with rocks. Two bonobos were put in cages side by side, with a window in between.

"We gave one individual several nuts, and the other individual several stones. And we wanted to see whether they would help each other out," says Krupenye. "Either of them could transfer their surplus resources to help their partner."

Bonobos showed very little motivation to hand over stones, again suggesting that sharing tools or objects is not part of their usual routine. "They just don't seem to show this kind of behavior," says Krupenye.

But they did consistently share nuts — even though they could have easily kept the nuts for themselves. And that's very different than what's observed among chimpanzees, the researchers report Tuesday in the Proceedings of the Royal Society B.

In the wild, sharing of food by chimps typically happens after a rare hunt, and the "sharing" of meat often involves the passive tolerance of theft or simply giving in to relentless begging and harassment by others.

In contrast, the bonobos voluntarily handed over nuts that were solidly in their possession.

"What we are seeing in bonobos is very unusual," says Krupenye. "We do see food sharing in other species, but in the vast majority of cases it is that one individual tolerates another taking something from them."

The finding adds to a growing body of evidence that bonobos are uniquely pro-social when it comes to food, says Zanna Clay, a primatologist at Durham University in the United Kingdom.

"One thing that seems to be special about bonobos is they don't seem to have such large competition around food in the same way as chimpanzees do," says Clay, who notes that even bonobos from different communities will share food — including very desirable food, like meat.

What's more, actively handing over food items in a voluntary way, as bonobos did in this study, is special. "Normally that happens just between mothers and infants, in most species," she says. "It's really very unusual in animals."

It's unclear why bonobos wouldn't similarly share tools, but Clay points out that "in the wild, bonobos don't use tools."

Joan Silk, a primatologist at Arizona State University, says she found the paper surprising and would like to see the results replicated in multiple groups of bonobos.

"If we found out that chimps are more likely to exchange tools than bonobos are, then I don't know what we'd think," says Silk, noting that chimps may have a different understanding about the value of tools, simply because they use them more.

Sharing is a much bigger part of life in humans than it is for these other apes, Silk adds; but researchers don't yet know if the difference is simply quantitative or whether humans approach sharing and helping in a fundamentally different way.

Why Children Aren't Behaving, And What You Can Do About It

Young children demonstrate a surprising willingness to share, says Silk — though that may come as a surprise to parents who constantly have to remind their kids to do so.

"Children are very generous," insists Silk, who has studied sharing behavior, not just in chimps but also in young kids.

"Compared to chimpanzees," she says, "your children are saints."