Accessibility links
Update: A Leukemia Patient And CAR-T Study At NIH : Shots - Health News After trying one treatment after another for his leukemia, 20-year old Aaron Reid enrolled in a study to test an experimental therapy using modified cells from his own body. 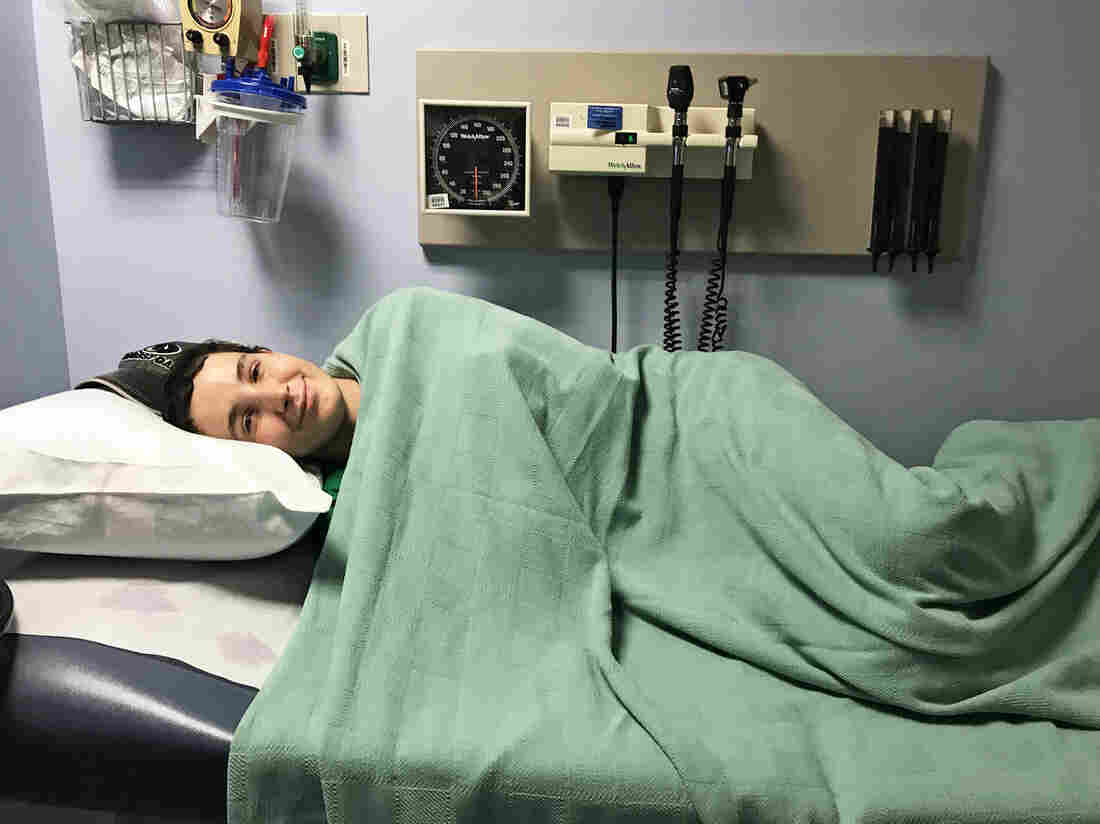 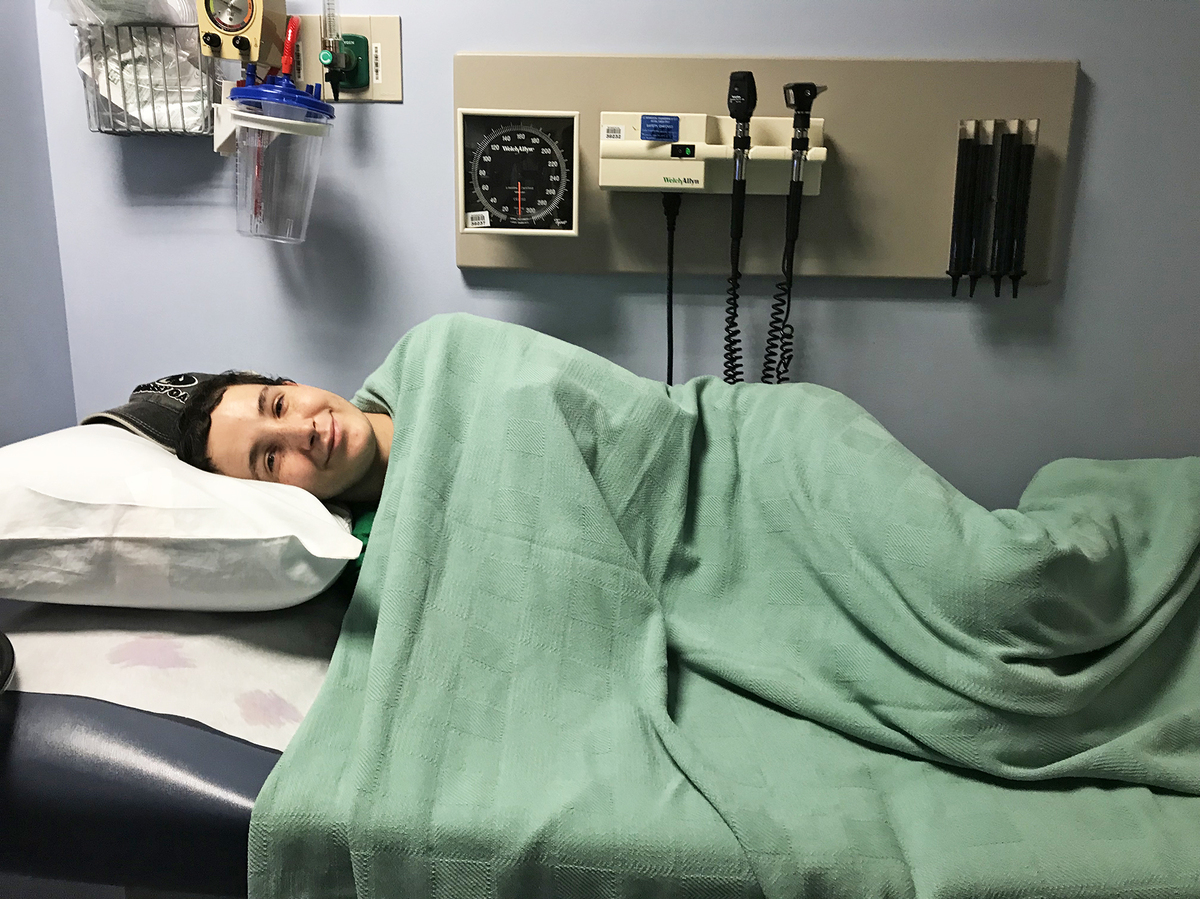 Aaron Reid, 20, rests in an exam room in the National Institutes of Health Clinical Center in Bethesda, Md.

It's early in the morning and 20-year-old Aaron Reid looks like he's sleepwalking.

His head nods forward and he shuffles a bit as he heads toward the pediatric clinic at the National Institutes of Health Clinical Center.

Reid, who has been fighting leukemia since he was 9-years old, is experiencing intense pain.

He can't say much at the moment, so his mother, Tracie Glascox, speaks for him. "He's been complaining of pain in his ankles, his knees and his arms," she tells the nurse.

The pain could be a bad sign. It could mean that an experimental treatment Reid is betting on hasn't worked to control his cancer. Instead of curbing the leukemia, the cancer may be continuing to proliferate.

Reid, who's from Lucedale, Miss., came to NIH in July to take part in a an early-stage clinical trial for a cancer treatment called CAR-T for short.

By that point, he'd tried pretty much everything from radiation and chemotherapy to a bone marrow transplant to make the cancer go away — and stay away. Nothing worked for long, however.

The clinical trial Reid signed up for was designed to test the safety of a CAR-T therapy in which a patients own immune system cells are genetically engineered to go after cancer. Some people refer to it as a "living drug" because the treatment is made from a patient's own cells.

The Food and Drug Administration has already approved other living drugs to treat some children and young adults with leukemia and certain adults with lymphoma.

In Reid's case, 17 million of his own immune cells were engineered to recognize two targets on the leukemia cells instead of one. Doctors hoped this modification would increase the chances the cells would successfully find and attack the cancer.

Reid is back at the NIH hospital to find out if the treatment is working. To do so, he needs two tests.

Unfortunately, he's in too much pain to withstand the first test, a PET scan.

Instead, nurses give him pain medication and hope he'll be able to get the scan the next day.

"They said they're going to be admitting him for pain management," Reid's mother says. "It's real important to know what's going on with Reid and why he's having all this pain."

The following day Reid looks like a completely different person. He's energetic and smiling. Most of the pain, except for a little in his arm, is gone.

"It's a lot better than yesterday," Reid says. He easily gets through the hour and a half it takes to complete the PET scan.

The next day he had a bone marrow biopsy. Finally, it's Friday, and the moment he and his mother have been waiting for: When they'll find out if the treatment has worked.

The researcher in charge of the study, Dr. Nirali Shah, a pediatric oncologist at the National Cancer Institute, walks into Reid's hospital room.

Reid is wearing tan jeans and his sunglasses are propped on top of his head. He perches on the side of his hospital bed while his mother sits quietly nearby.

"All right," Shah begins, "There absolutely is evidence that some of the areas of disease involvement that you had are gone."

The cancer has disappeared from parts of Reid's body, including his bone marrow. Also, the genetically modified immune cells are still evident in his body, she says, so they could continue to "attack the leukemia."

But the pain Reid was struggling with earlier in the week turns out to have been an indication that in other areas his disease has worsened.

The leukemia has continued to progress, which shows the living drug only worked a little.

"Based on your PET scan results, we know that it's not enough," Shah says. "Our hope would have been that we would have seen no signs of progression. And progression is really the pain that you were having. So it is a mixed response."

Shah is quick to add that this is not the "end of the road" for Reid. There are other therapies he can try.

In the meantime, he's cleared to do the one thing he wants to do most of all: return home.

"At least some of the cancer is gone," Reid says. "That's awesome. Less cancer is always better than more."

Shah says for a Phase 1 trial, the early-stage study that aims mainly to assess a drug's safety, Reid's results were helpful. The dose doctors used didn't appear to cause harm. That's encouraging for the researchers who want to continue to test the treatment and to tweak it, they hope, so it will work better on patients with Reid's type of disease.