Accessibility links
Babies Still Injured In Infant Walkers, Doctors Call For Ban : Shots - Health News Despite improved safety standards over the years, more than 230,000 children under 15 months old were treated in hospital emergency rooms for injuries related to infant walkers from 1990 through 2014. 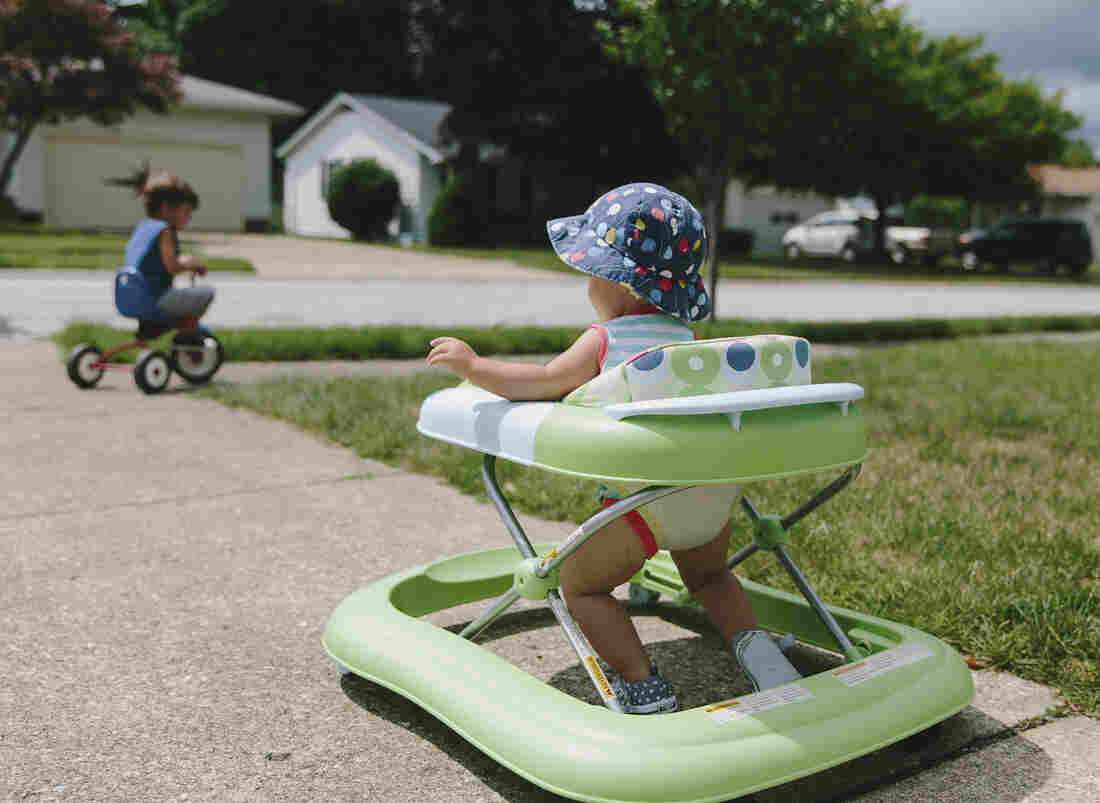 Skull fractures, concussions and broken bones are common injuries when children not yet able to walk use infant walkers and fall down stairs. Mint Images/Getty Images hide caption 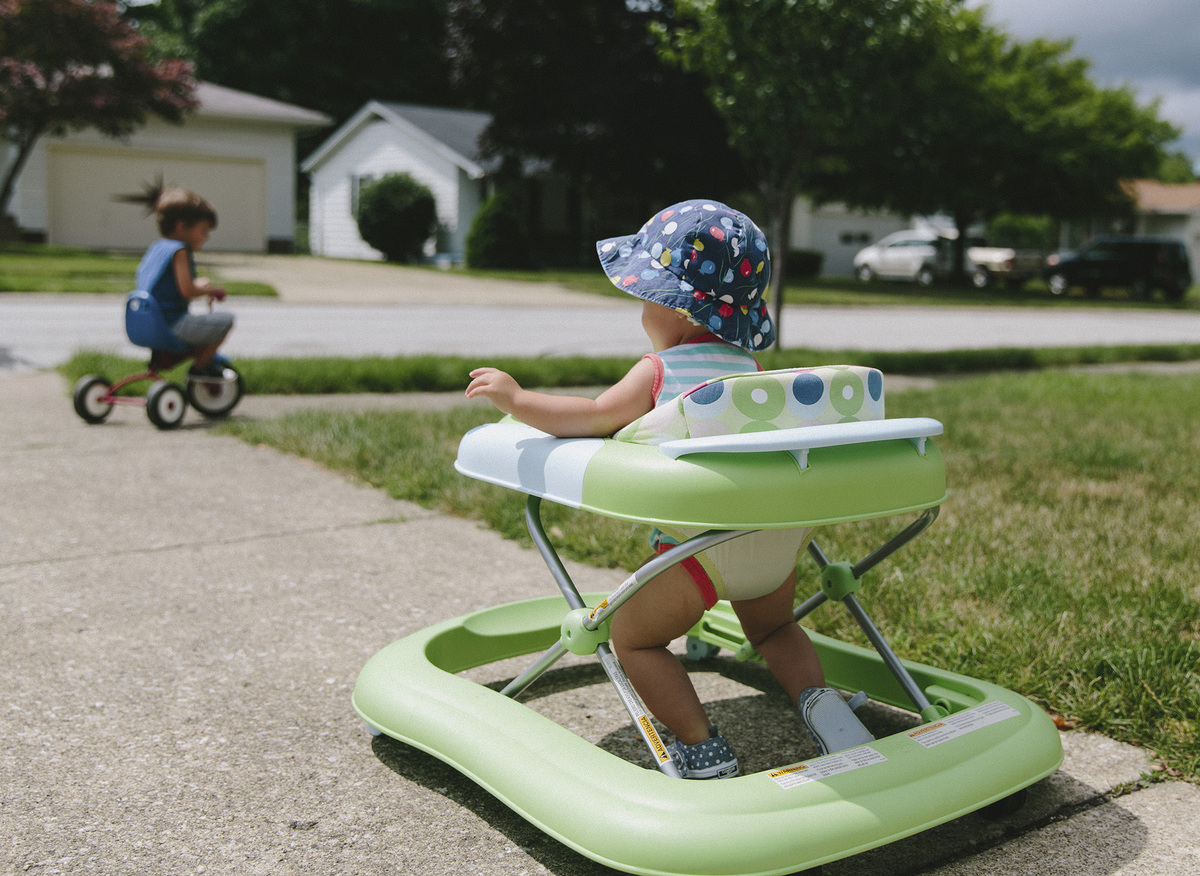 Skull fractures, concussions and broken bones are common injuries when children not yet able to walk use infant walkers and fall down stairs.

Watching an infant propel herself across the floor on wheels in a saucer-shape baby walker may be as entertaining as a comedy episode. But because hospital emergency rooms treat more than 2,000 babies a year for injuries sustained while using these walkers, American pediatricians are repeating their decades-old call for a ban.

"I view infant walkers as inherently dangerous objects that have no benefit whatsoever and should not be sold in the U.S.," says Dr. Benjamin Hoffman, a pediatrician who chairs the American Academy of Pediatrics Committee on Injury, Violence and Poison Prevention.

More than 230,000 children under 15 months old were treated in U.S. hospital emergency departments for skull fractures, concussions, broken bones and other injuries related to infant walkers from 1990 through 2014, according to a study in the journal Pediatrics published Monday.

The walkers are designed to mobilize babies not yet able to walk on their own, but moving on four wheels sometimes sends them on dangerous paths or tumbling down stairs.

Pediatricians have long warned against using baby walkers, and consumers groups joined them to call for a ban in 1992. Publicity about the hazards has led some parents to stop using infant walkers and manufacturers to voluntarily tighten safety standards. In fact, the number of injuries related to baby walkers dropped dramatically from nearly 21,000 in 1990 to 3,200 in 2003, the study notes.

In 2010, the U.S. Consumer Product Safety Commission strengthened safety requirements on the manufacture and testing of infant walkers, such as installing brakes to prevent stair falls. Injuries dropped an additional 23 percent in the four years after the federal mandatory safety standards took effect compared with the four years prior, the study found.

The study is the first to examine the impact of these regulations on emergency room visits. The researchers conclude that the rules probably slowed the number of injuries, but thousands of children are still getting hurt.

"Despite this great success, there are still 2,000 children a year being treated for injuries, many of them serious injuries, in emergency departments," says Dr. Gary Smith, the study's senior author and the director of the Center for Injury Research and Policy at Nationwide Children's Hospital in Columbus, Ohio. "Therefore, we support the position of the American Academy of Pediatrics that baby walkers should not be sold or used. There's absolutely no reason these products should still be on the market."

Smith and Hoffman, who practices at the Oregon Health and Sciences University in Portland, agree that the study provides further proof that the CPSC should follow Canada's lead and ban the manufacture, sale and import of infant walkers. Canada banned the devices in 2004.

Falls From Strollers And Baby Carriers Can Cause Serious Injuries

The CPSC, an independent government safety agency comprising five presidential appointees, notes that the study shows that injuries have decreased significantly since the 2010 regulation. "CPSC continues to monitor the products' safety," it says in a statement to NPR.

But doctors say the damage infant walkers can do to children's brains and bodies is not worth the risk of keeping them on the market. Smith has treated babies who landed head-first on concrete after falling down a flight of stairs while strapped into an infant walker. So has Dr. Jerri Rose, a pediatric emergency physician and professor at Case Western Reserve University School of Medicine in Cleveland.

Rose, who was not involved with the study, says she has seen a slight drop in the number of babies coming into the hospital after being injured in infant walkers. But she continues to treat infants who get into accidents in walkers.

"They're really not safe," she says, especially because parents often use them as baby sitters so they can turn away and focus on other tasks.

The walkers can allow babies to toddle into areas they ordinarily could not reach — stairways, pools, bathtubs and kitchens. Some have drowned, and some have suffered burns after pulling boiling food off stoves, Rose says.

A previous investigation identified eight babies who died from 2004 to 2008 as a result of injuries sustained in infant walkers.

Smith estimates that babies strapped into infant walkers can travel 4 feet in one second — faster than their parents.

"Parents bought the myth that if they watched their children carefully they wouldn't get into trouble," he says. "But that was a myth."

Also, many parents mistakenly believe that infant walkers can speed their children's ability to walk. But studies have shown that they might slow motor development, Rose says.

Many families still buy infant walkers despite the warnings, though, and some families hand them down from generation to generation, the authors of the Pediatrics study write. Stores stock a colorful selection of walkers decorated with an array of animals and Disney or Sesame Street characters.

It's not just infant walkers that cause injuries. Improper use of infant walkers, baby carriers, strollers, changing tables and bath seats brings children 3 years or younger into U.S. hospitals to be treated for injuries every eight minutes, a recent study showed, and these injuries are on the rise.

Ronnie Cohen is a Northern California journalist who frequently writes about health. Follow her on Twitter @ronnie_cohen.