Accessibility links
If Your Chair Hurts Your Back, Blame Technology, Then Try These Hacks : Shots - Health News Chair design shifted dramatically about a hundred years ago, and it hasn't been good for our backs. Our daily lives are filled with chairs that make our posture worse. Luckily, we've got hacks.

About a hundred years ago, something devious started happening in our homes and offices, in our cars and at restaurants — and our backs have never been the same.

For hundreds — even thousands — of years, chairs were made of wood. Maybe the seat was covered with cord or cattail leaves, and if you were rich, you could afford some padded upholstery, which began to take off in the 17th and 18th centuries.

To Fix That Pain In Your Back, You Might Have To Change The Way You Sit

But for most of Western history, people sat on chairs that were relatively firm, flat and proportioned for the human body.

Then in the 20th century, designers got their hands on new materials, such as steel, plastic and foam. And chairs started blowing up in size and softness.

"The 20th century was all about experimenting with technology and forgetting about the body," says Galen Cranz, who studies chair design at the University of California, Berkeley.

As a result, we've ended up with living rooms, offices and restaurants filled with chairs that are really bad for our backs, Cranz says. "It's shocking how poorly designed they are for our bodies." 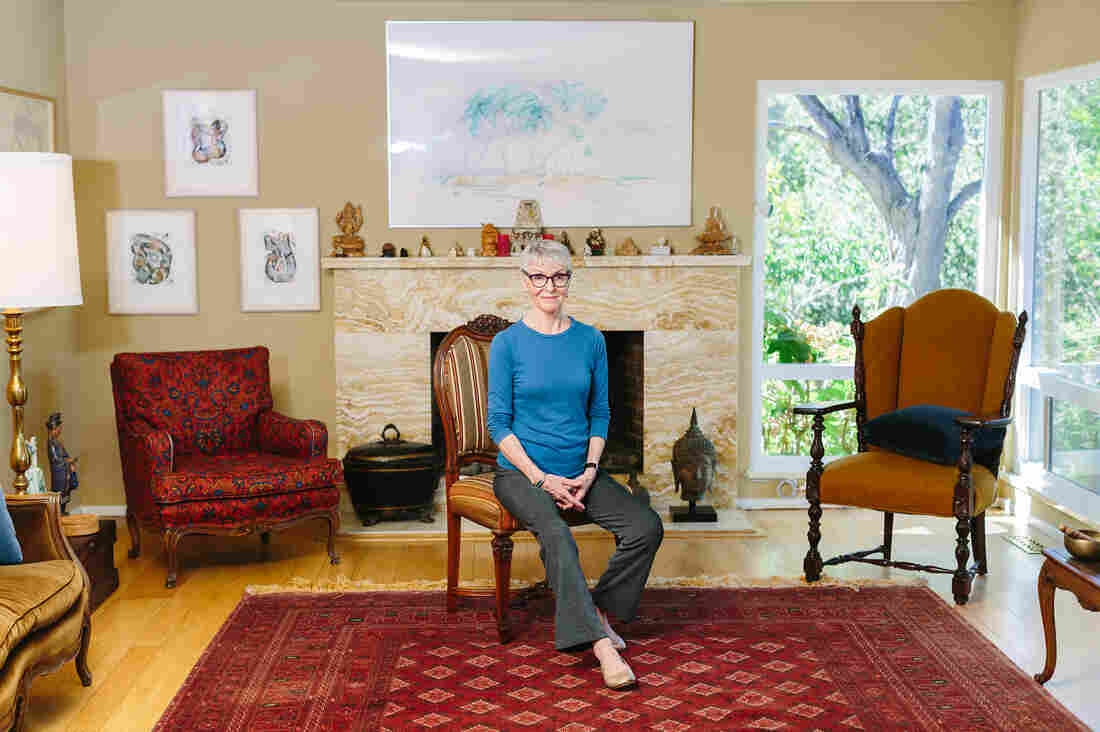 Jean Couch, 75, perches on the edge of a chair at her home in Los Altos Hills, Calif. She teaches people the art of sitting in chairs without back pain. Erin Brethauer for NPR hide caption 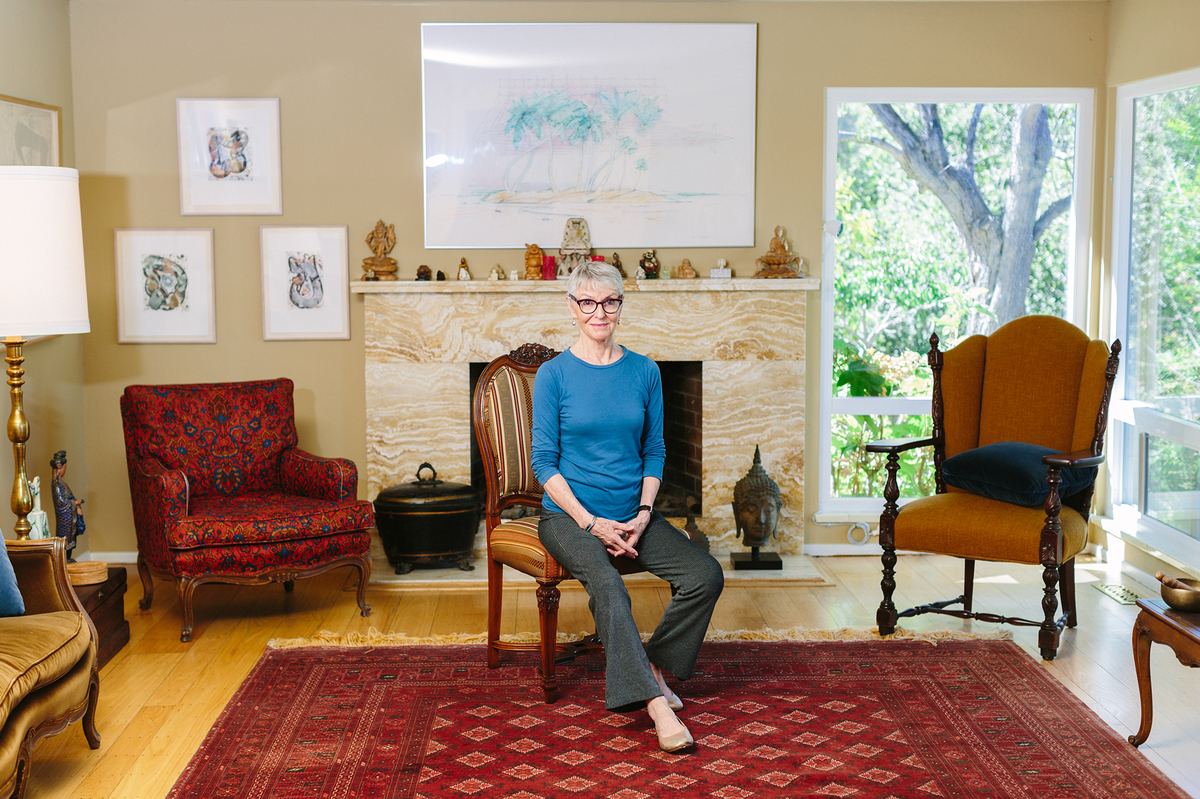 Jean Couch, 75, perches on the edge of a chair at her home in Los Altos Hills, Calif. She teaches people the art of sitting in chairs without back pain.

"Now we need to use props and techniques to sit in chairs in a way that's good for our backs," says Jean Couch of Palo Alto, who is part of a growing movement on the West Coast to teach people to move and sit as they did in the past.

Almost every chair has one of two problems: They're too deep or too soft, Couch says.

"When a chair is too deep, the backrest is too far away from the edge and you can't put your legs [feet] on the ground without slouching," she says. "Else your legs stick out like a little kid."

And when chairs are too soft, it's almost impossible not to slouch. "The chair causes your hip bones to fall back and your spine bends into a C shape," Couch says.

Slouching a little bit every now and then isn't a problem, says Stuart McGill, who studies spine biomechanics at Waterloo University in Ontario, Canada. "But if you repeatedly expose your spine to this bending, it will become pain-sensitive in most people." Over time, you also run the risk of damaging the disks.

So should we all run out and buy new chairs?

"That's not necessary," Couch says. These three tricks can basically get you comfortable — with a straight spine — in any chair.

"So if I walk into a room and see only soft and deep chairs, I will look for a chair with a frame," Couch says. "Then I'll sit on the hard, front part of the chair."

In other words, forget about the back rest and use the wooden frame of chairs as a firm support. That makes it easier to keep your pelvis from tucking under your spine and your back ending in a C shape.

And be careful how you position your legs, Couch says. "The big trick is to have your knees below the hip socket."

Most people think the knees and hips should be at the same level, Couch says, so that the angle between your torso and legs is 90 degrees.

But you'll be more comfortable — and less likely to slump — if that angle is bigger than 90 degrees, Couch says. "Something like 120 degrees," she says.

Astronauts' legs automatically take this angle when they're floating in the space station with microgravity. NASA calls it the neutral body posture because it's when the muscles are relaxed.

"So I'm perched right now," Couch says as she sits down on her kitchen chair, which is clearly too soft. "Way too soft."

To fix it, she takes a firm pillow and places it a few inches from the chair's front edge. Then she sits down on the front of the pillow. So the pillow is tilting her pelvis forward a bit, and she's kind of elevated above the chair.

She says you can really use anything to build a perch — a wool blanket, a jacket, a rolled up yoga mat.

"I've sat on my wallet, a shoe, a folded sweater, but the best is a wedge," she says, as she pulls out what looks like an incline plane.

"It's a wedge-shaped pillow, and it's pretty dense foam," Couch says. "You want it as dense as you can get for it to really help."

Whether it's a wedge, a shoe or your husband's wool sweater, Couch says, these props help in two ways. First, they give you something firm to hold up your sitz bones (sitting bones). "When it's too soft, my hip bones fall back and then I'm in that nasty C shape," she says.

And second, the pillow raises your hips up a bit so it's easier for your knees to drop below and your legs to find that sweet spot of comfort — 120 degrees from your torso.

The first two tricks work great for most chairs. But there's one situation in which sitting on the edge or perching on a pillow isn't a good idea: in the car.

"You definitely don't want to be sitting away from the backrest for safety reasons," says Esther Gokhale, who also teaches posture and traditional movement in Palo Alto. "You have to be up against the backrest and headrest or you could get whiplash in an accident."

But there's a big problem with the backrests in many cars and airplanes: They are shaped like C's. If you use them properly, they force you to slump and bend your spine.

"The only solution is build out the backrest so it's more planar," Gokhale says, so you turn the C shape into an I shape.

To do that, Gokhale says, grab one of your perching props. Take a firm pillow, a blanket or sweater and stick it right at your mid back.

"Then elongate your spine by gently stretching your back over the pillow," Gokhale says. And voila! You've turned a painful, slouchy chair or car seat into a comfortable one.