Accessibility links
Bill Of The Month: Emergency Air Ambulance Ride Leaves Injured Doctor With $56,6 : Shots - Health News After an accident in an all-terrain vehicle crushed a doctor's left arm, he was whisked by air ambulance to the closest trauma center for specialized care. Soon he was fighting over the $56,603 bill. 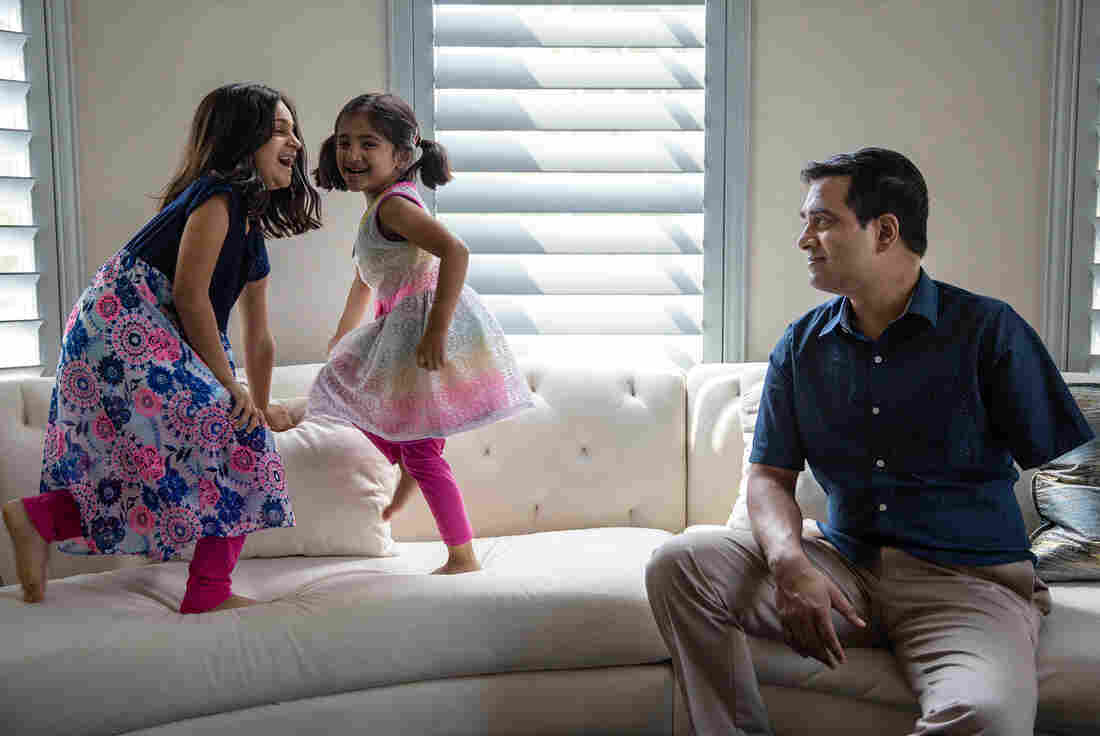 "The biggest challenge for me was to see how I would be a father again," says Dr. Naveed Khan, who was injured while driving an all-terrain vehicle. "With two able-bodied parents at home, it was easier." Shelby Knowles for NPR hide caption 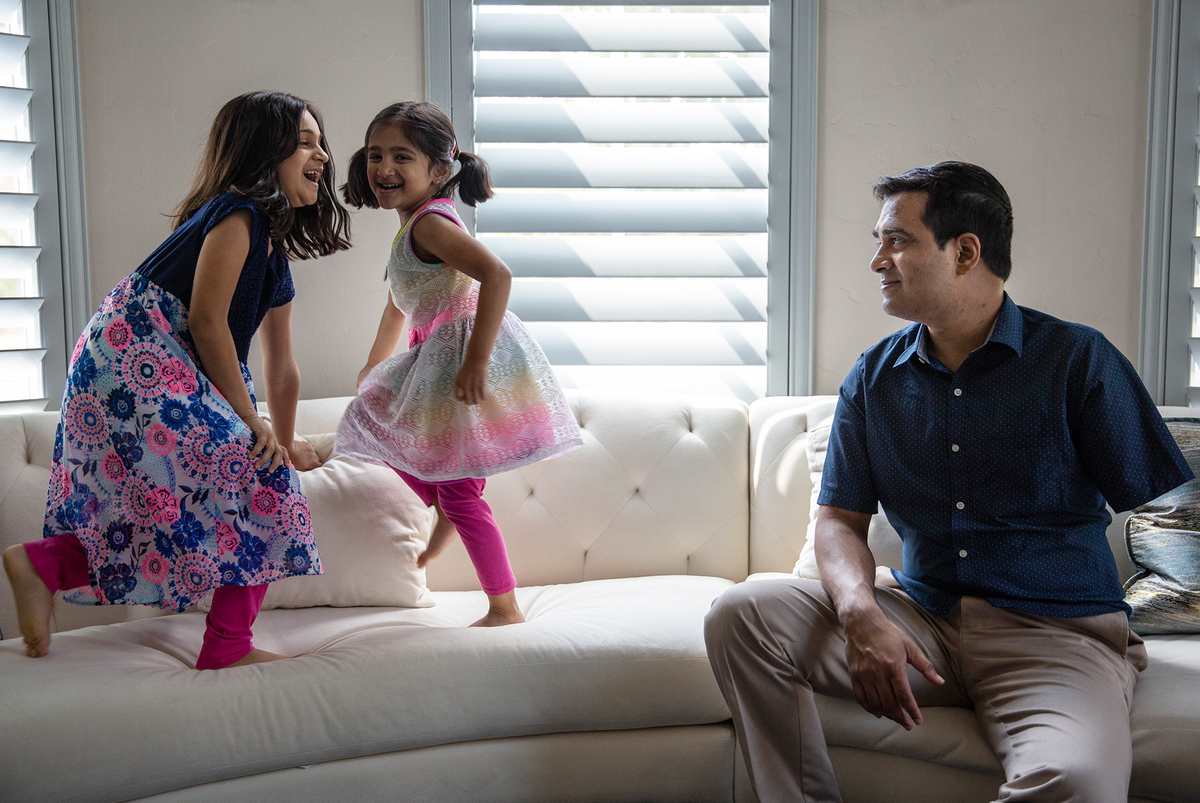 "The biggest challenge for me was to see how I would be a father again," says Dr. Naveed Khan, who was injured while driving an all-terrain vehicle. "With two able-bodied parents at home, it was easier."

It was the first — and only — time Dr. Naveed Khan, a 35-year-old radiologist, ever rode in an all-terrain vehicle.

Khan took the wheel from his friend and drove circles in the sand, on a trail along the Red River in Texas.

"As soon as I turned to the side where my body weight was, this two-seater vehicle ... just tilted toward the side and toppled," Khan recalled. It landed on his left arm.

Khan, feeling lightheaded, tied his jacket around his arm like a tourniquet. He and his friend managed to right the ATV, drive back toward the street and call 911.

When an ambulance delivered him to the emergency room at United Regional Health Care System in Wichita Falls, Khan was surprised to hear a doctor murmur that it was the worst arm injury he'd ever seen.

Khan needed immediate helicopter transport to a trauma center for surgery in Fort Worth, if there was any hope of saving the arm.

Groggy from painkillers, Khan managed to ask the doctors how much the flight would cost and whether it would be covered by his insurer. "I think they told my friend, 'He needs to stop asking questions. He needs to get on that helicopter. He doesn't realize how serious this injury is,' " Khan recalled.

Flown 108 miles to John Peter Smith Hospital in Fort Worth, the closest Level I trauma center, Khan was whisked into surgery to clean out the wound, repair his shattered bones and get blood flowing to the tissue.

He had a total of eight operations to try to save his left forearm before he finally gave up. After weeks in the hospital, he asked the doctors to amputate, so he could get on with his life. 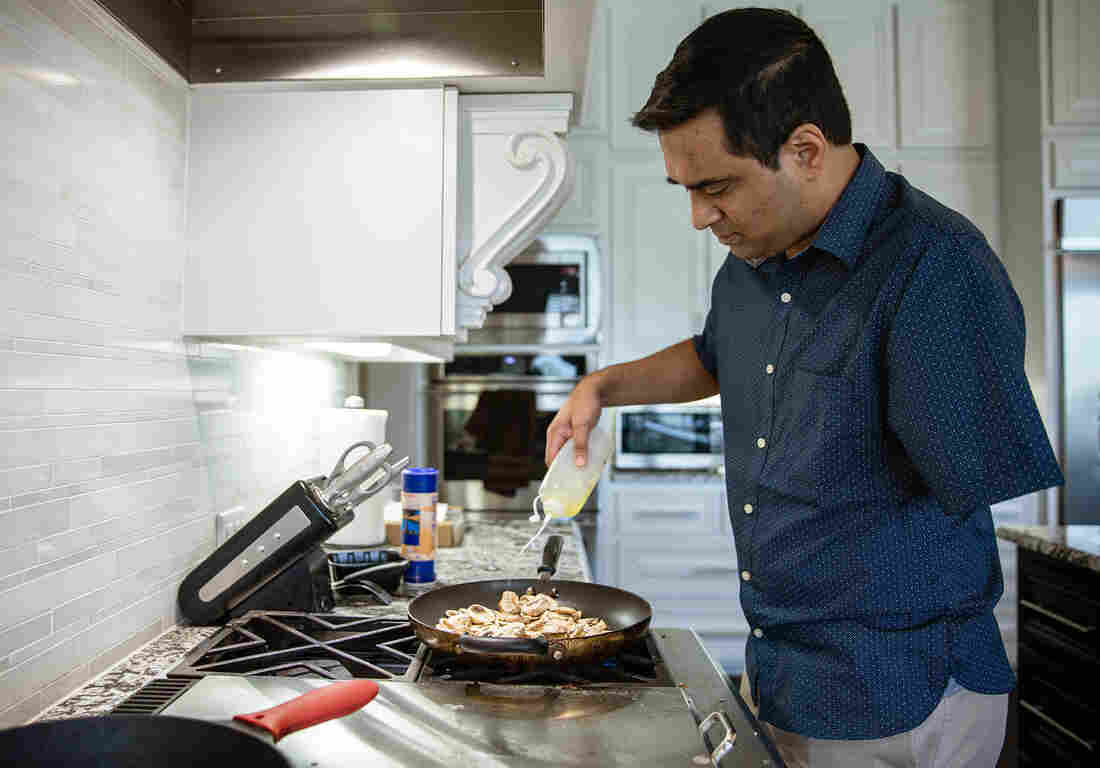 Khan makes lunch for his wife, Ayesha, and their children. He has always enjoyed being in the kitchen and says cooking has been a helpful part of his recovery. Shelby Knowles for NPR hide caption 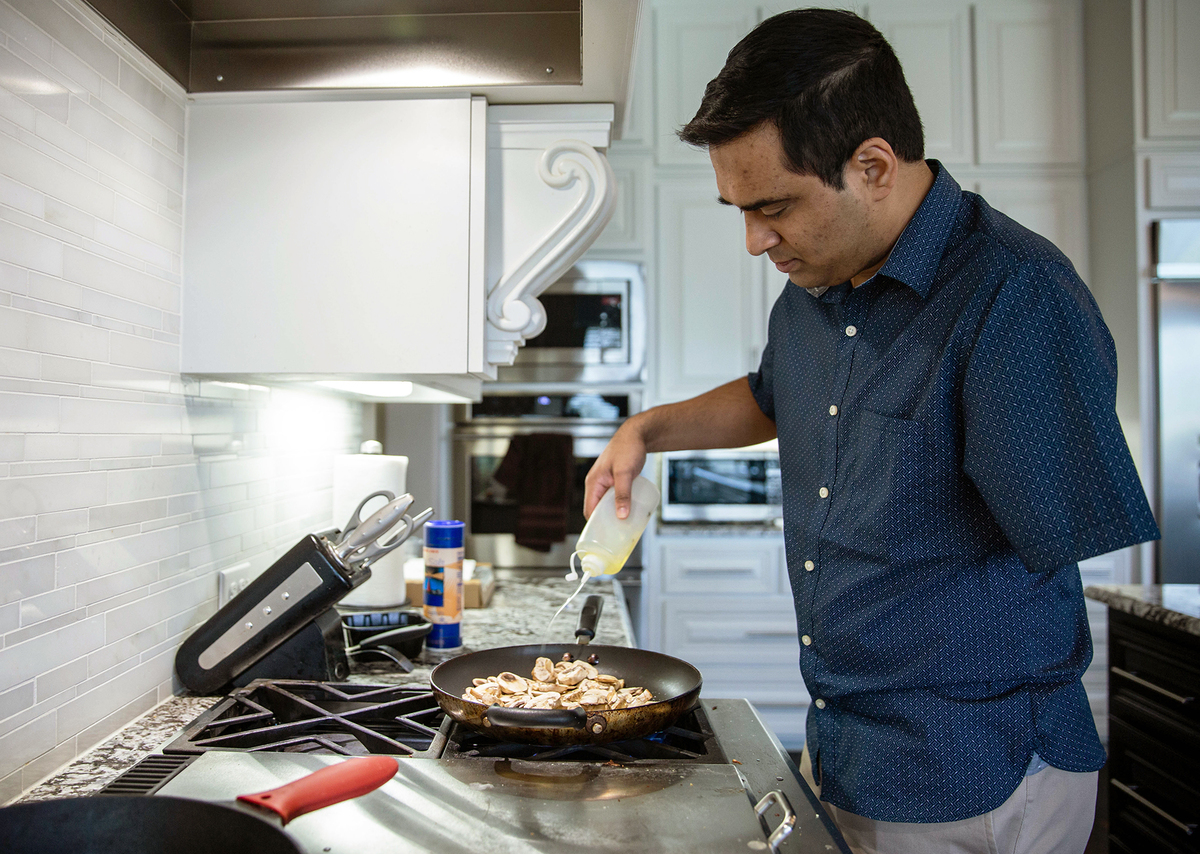 Khan makes lunch for his wife, Ayesha, and their children. He has always enjoyed being in the kitchen and says cooking has been a helpful part of his recovery.

Medical service: Khan was flown from the United Regional Health Care System in Wichita Falls, Texas, to the John Peter Smith Hospital in Fort Worth.

What gives: Khan got his first call from Air Evac Lifeteam just three days after the accident, while he was still lying in the hospital. A company representative told him the helicopter ride would most likely cost more than $50,000 and asked him how he planned to pay.

For Khan, rapid transportation to the trauma center was essential since the blood supply to his arm had been cut off, said Dr. Rajesh Gandhi, the medical director for trauma services at JPS Hospital.

But complaints about sky-high bills to patients for air ambulance services are common. Since launching the "Bill of the Month" series in February, NPR and Kaiser Health News have received more than a dozen bills from patients like Khan who were charged tens of thousands of dollars for an air ambulance ride even after insurers' payments.

Rick Sherlock, president of the Association of Air Medical Services, a trade group, said air ambulances require a more highly trained crew than a ground ambulance, because only the sickest or most seriously injured patients need air transport.

AAMS commissioned a study to determine the actual cost of a medevac ride. The report found it takes about $2.9 million a year to run a single helicopter base. Each base handles about 300 transports a year, and the rides cost about $11,000 each, according to the report.

A spokeswoman for Air Evac Lifeteam said the company bills people so much because it is trying to make up for what she said are meager payments from Medicare and Medicaid.

"Our real cost per flight is the $10,200 plus the unreimbursed cost on each flight for Medicare, Medicaid and patients without any coverage," wrote Shelly Schneider, the company spokeswoman.

The Centers for Medicare & Medicaid Services said it pays an average of $4,624 per ride, plus $31.67 a mile, which works out to an average Medicare reimbursement of $6,556 for helicopter ambulance rides for seniors. Medicaid in most states pays less. 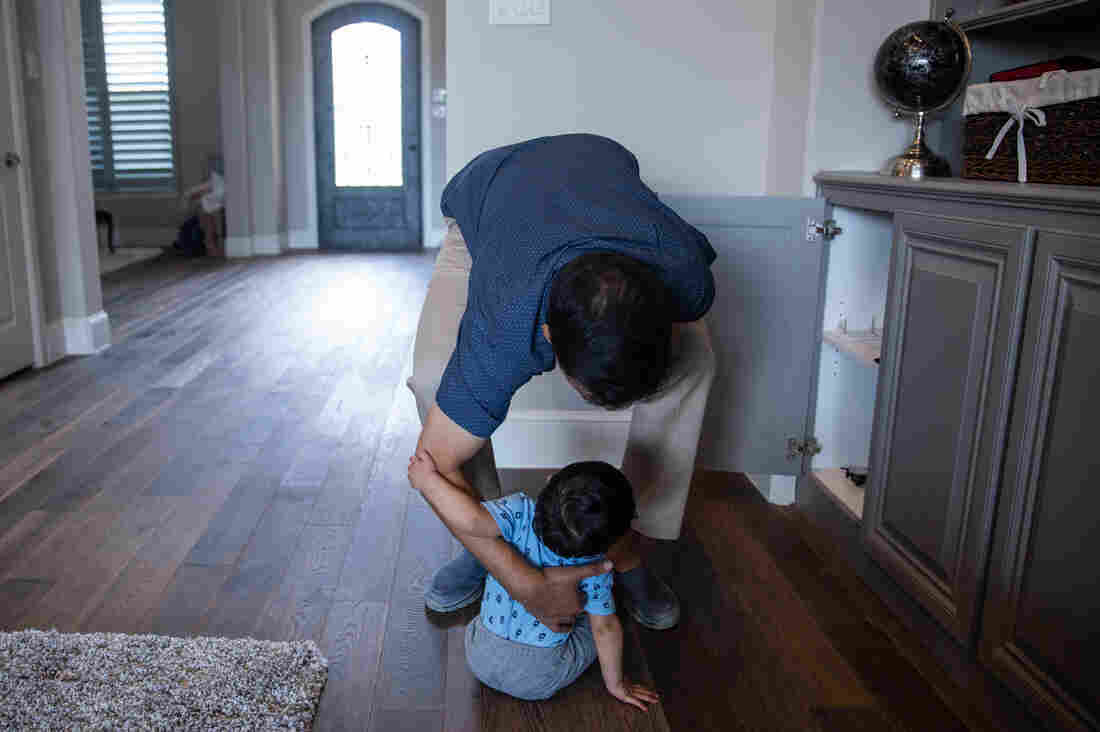 Khan picks up his youngest child at their home. Shelby Knowles for NPR hide caption 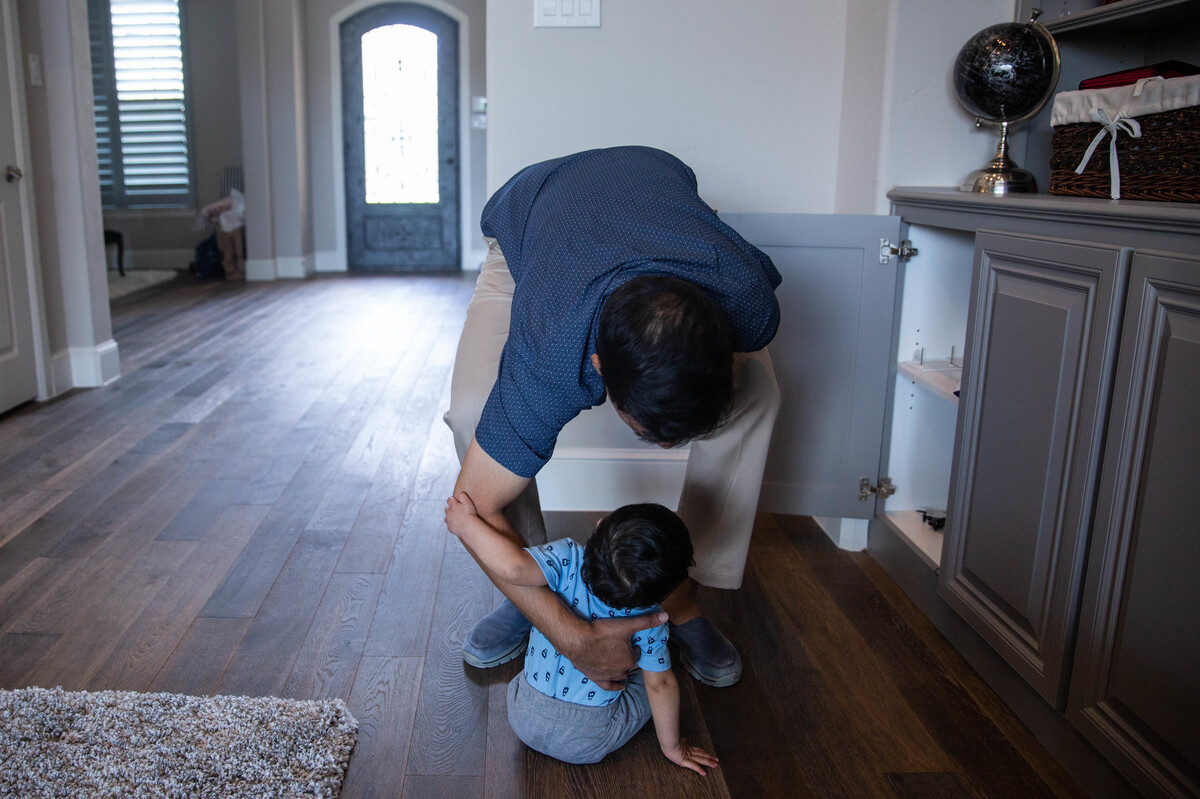 Khan picks up his youngest child at their home.

The industry has been advocating hard to get Medicare to boost its reimbursements, Sherlock said. There are bills pending in both the House and Senate that would do so, but there hasn't been much movement on them.

But others say the industry's cost estimates are inflated by profit-driven expansion of a lucrative industry. Ground ambulances often carry critically ill patients, too.

Too many air ambulances sit idle much of the time, said Dr. Ira Blumen, a professor of emergency medicine at the University of Chicago and medical director of the university's Aeromedical Network.

Blumen said the industry — which is dominated by a few companies owned by private equity firms — expanded dramatically in 2002, the last time Medicare boosted its payments. And now there are too many helicopters — 908 as of last year — fighting for patients and profits at the same time.

"The number of helicopters is outrageous for the continental United States," he said. In the 1990s, most helicopters ran more than 500 flights per year on average. At that rate, the cost per flight today would be less than $6,000.

A BCBS of Texas spokesman said the insurer does have a contracted rate with an in-network air ambulance company, but it is not Air Evac Lifeteam. After initially refusing to pay anything for an out-of-network claim, it agreed to the $11,972 payment.

But in some sense, the reason ambulance companies charge so much is simply that they can: Air ambulances are largely regulated not as health care but as part of the aviation industry. Federal laws prevent states from limiting aviation rates, routes and services.

So many people have been hit with shockingly high air ambulance bills that members of Congress on both sides of the aisle are trying to do something about it. Legislation to reauthorize funding for the Federal Aviation Administration that is moving through Congress now would create a council of industry experts to address balance billing and other issues and set up a complaint line for consumers.

Resolution: Khan has allowed Air Evac Lifeteam to negotiate with BCBS of Texas over the remaining $44,000-plus air ambulance bill. The company has asked him to appeal to the state's Department of Insurance, and though he first balked at the suggestion, he is now considering doing so. Khan said he doesn't understand why the helicopter flight, which was an integral part of the emergency medical care he received, is treated differently from his surgeries, nursing care and physical therapy.

He is waiting for resolution as he gets accustomed to life with his disability. Holding his baby son, he asked in frustration: "How do I hold him while he's crying and at the same time heat up his bottle?"

Khan, who has had to fight with his insurance company to get coverage for a prosthetic arm, was frustrated when he learns that the air ambulance company expects him to pay far more than the actual cost of his flight.

"It's unfair," he said. "It's random; it's arbitrary. It's whatever price they want to set. And to put that onto a person who's already been through what I've been through, I hate to say it, but it's cruel."

The takeaway: Most people with health problems serious enough to require a helicopter flight are in no position to ask whether the medevac company is in-network or there's a choice. But if you or a family member has time to ask, it could pay off.

If you're faced with a huge bill for a medevac ride, there are a few steps you should take. 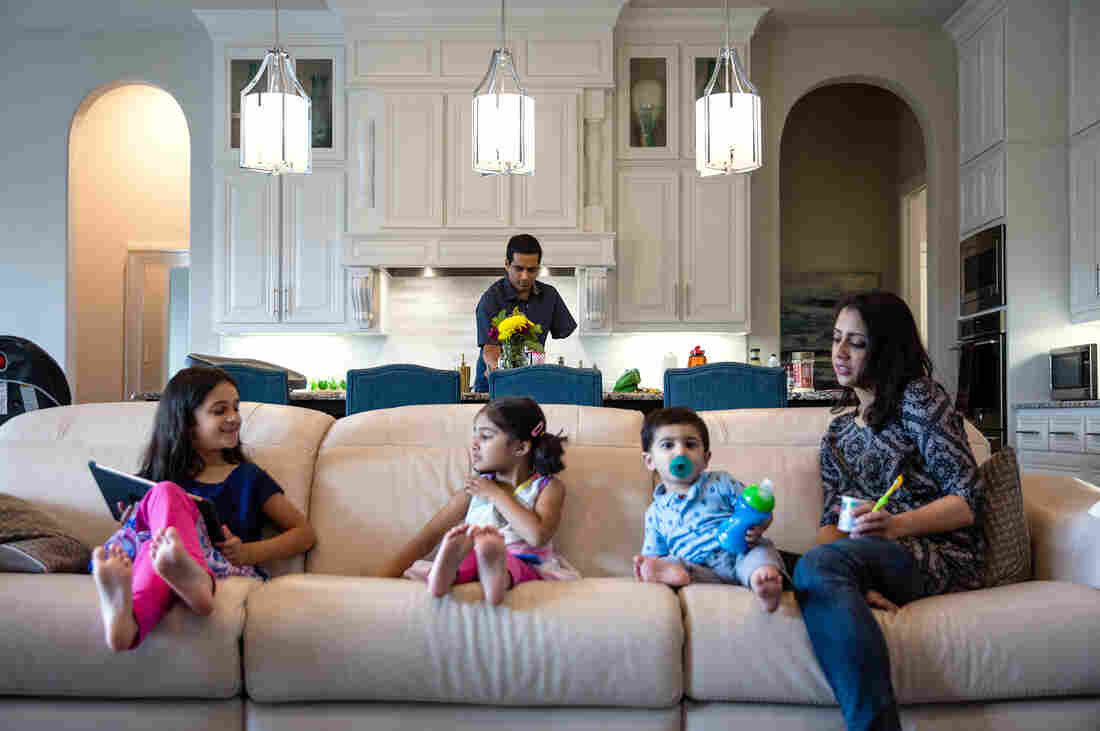 Khan prepares lunch while Ayesha and their children play on the couch. Shelby Knowles for NPR hide caption 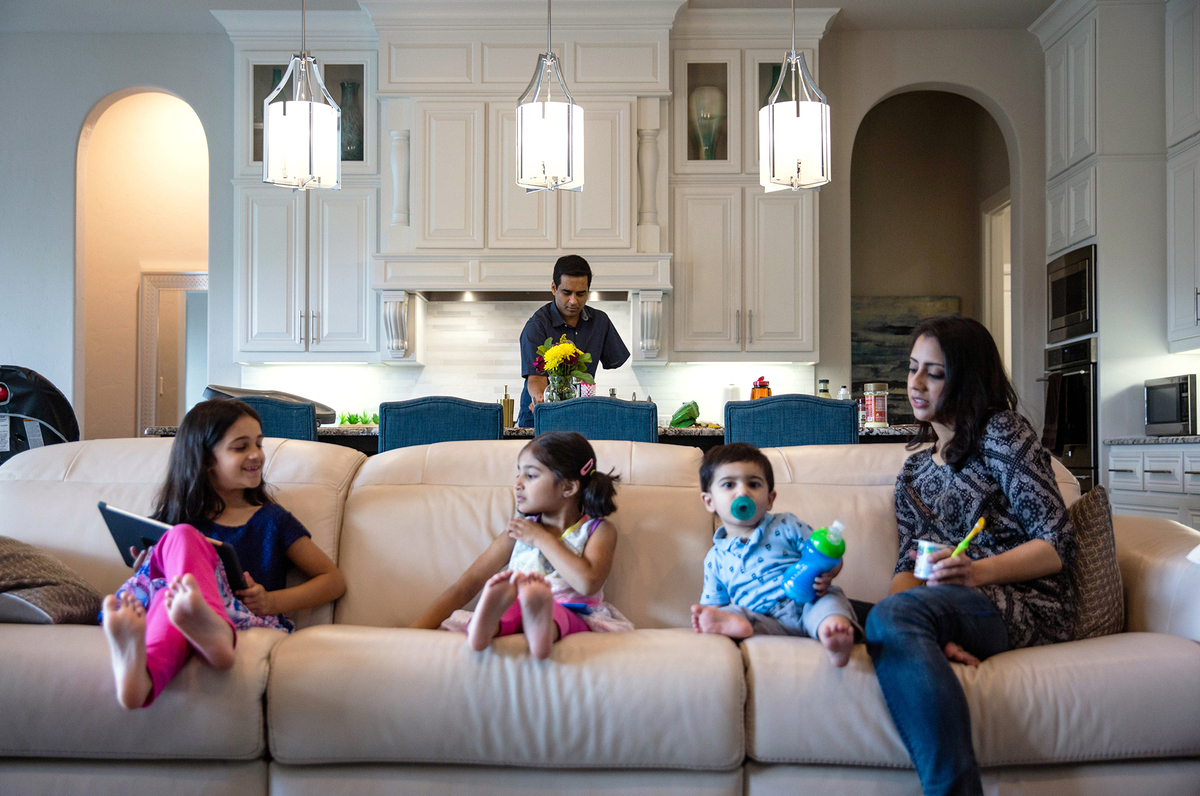 Khan prepares lunch while Ayesha and their children play on the couch.

First, let your insurer's process play out. BCBS of Texas first denied Khan's claim altogether. But he looked closely at his policy and saw that the threat of loss of limb was explicitly covered. He appealed, and that's when the insurer paid $11,972.

Second, negotiate! The air ambulance company might be willing to negotiate a settlement for a fraction of the bill to avoid turning to debt collectors, who would pay them pennies on the dollar.

Both Sherlock of the Association of Air Medical Services and Schneider of Air Evac Lifeteam said companies will try to determine what a patient can afford. So people with high incomes may find it hard to obtain a substantial reduction for their bill. Still, if patients know the true cost of the service they received, they may be better equipped to negotiate a discount.

Many air ambulance companies offer membership plans that can cost less than $100 a year and guarantee that the company will accept whatever payment an insurance company makes without billing the patient for the rest. But buyer, beware: When people need an air ambulance, they are often not in a position to choose which company will respond to the call.