Accessibility links
Blackout Drinking Can Lead To Memory Gaps Without A Loss Of Consciousness : Shots - Health News Heavy drinking can lead to alcohol-induced amnesia. It can be total or it can be spotty. Either way, it can be difficult for a bystander, or even the inebriated person, to know when it has happened.

You Don't Have To Pass Out To Be Blackout Drunk

You Don't Have To Pass Out To Be Blackout Drunk 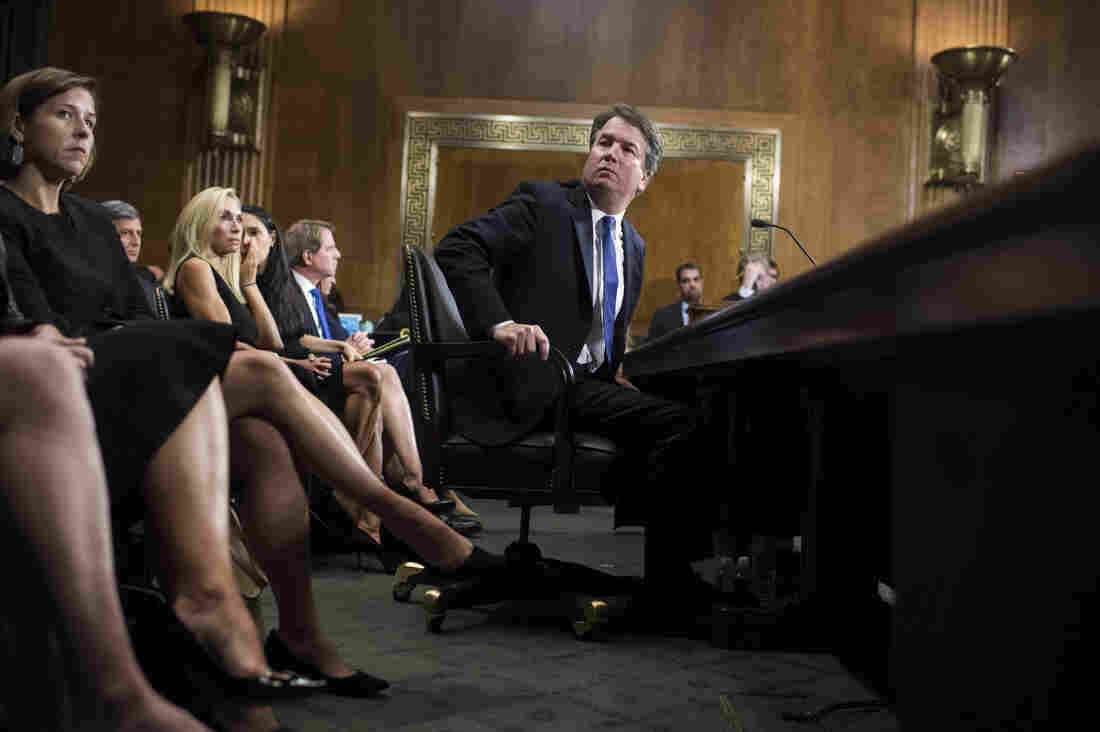 Unless you've been blissfully unplugged, you must have come across the term "blackout" lately. And you may have thought it means inebriated to the point of unconsciousness. Falling-down drunk. Blotto.

Supreme Court nominee Brett Kavanaugh appears to think so, based on this exchange last Thursday during his fiery self-defense before the Senate Judiciary Committee:

"Have you ever passed out from drinking?" queried Rachel Mitchell,  a sex crimes prosecutor from Phoenix retained by Republicans to ask question at the hearing.

"Passed out would be — no. But I've gone to sleep. But — but I've never blacked out," Kavanaugh replied. "That's the — allegation, and that — that's wrong."

But that notion of an alcohol-induced blackout is wrong.

A less confusing term might be "alcohol-induced amnesia." It can be total. Hours of experience and events can be totally missing from memory. Or it can be spotty. Either way, it can be hard to impossible for a bystander, or even the inebriated person, to know when it has happened.

Misunderstanding blackouts has big implications. The phenomenon could reconcile the disconnect between what psychologist Christine Blasey Ford says she remembers so indelibly about an alleged sexual assault by Kavanaugh one summer evening 36 years ago and Kavanaugh's categorical denial that it ever happened.

To understand the phenomenon, I talked with Dr. Richard Saitz, chair of Boston University School of Public Health's Department of Community Health Sciences, a veteran researcher of alcohol abuse and an addiction medicine specialist. Our conversation, edited:

There's been recent confusion about alcohol-related blackouts — what they are and what they aren't. What's been your reaction to the use of the term lately?

Many people confuse the idea of a blackout with someone who's had so much to drink that they are unarousable — they're not awake and they don't know what's going on. That's not at all the case. A blackout is when you don't remember what happened. You can appear to be completely awake. An observer can't tell when someone is in the midst of not forming a memory.

It's a curious phenomenon — a very selective kind of temporary memory impairment. What's going on in there?

It involves those parts of the brain that are required to take in what's happening and allow you to remember it later. You might remember it two or three minutes later but not 10 hours later or two days later or ever again, because it didn't get permanently encoded by the brain. It probably happens in the hippocampus and it involves the frontal lobes of the brain as well.

What touches it off?

If you drink a substantial amount quickly, you might experience a blackout. Drinking games would be an example of that because that's the point of the game.

How common are blackouts?

We don't have great epidemiologic data about this. I've seen the prevalence of blackouts ranging anywhere from 10 percent to up to 50 percent of young people who drink. It's fair to say it's not rare.

Does blackout seem to explain, at least potentially, the great divergence we heard last week in the testimony of Ford and Kavanaugh?

It's plausible that if he were drinking heavily and rapidly that he might have a blackout. So it's possible he might have no recollection of what happened.

What do you think when you hear Kavanaugh say, in response to a question about whether he's ever "passed out from drinking," that he's "gone to sleep, but ... never blacked out"?

I have no knowledge of what Judge Kavanaugh knows about the definition of "blackout" versus "passing out" versus "falling asleep after drinking." Passed out is not a clinical term and usually people use it to mean that they drank so much that they ended up falling asleep. I'm not sure if he could say that he had a blackout or not. The only way he would know is if somebody later told him that something happened while he was intoxicated and he didn't remember it, and then he believed they were telling the truth. So it's not a particularly easy question to answer unless you know the definition of blackout and your memory has been questioned, or somebody told you about it.

Ford placed Kavanaugh's companion, Mark Judge, in the room where the alleged assault occurred. If he also was drinking heavily and also had a blackout, neither of them would remember and nobody else would be in a position to call their attention to it.

Sure. It's conceivable they both could have had a blackout about the same event, although that begins to get a little bit less likely. If there was someone there to say that something happened, that's the only way you could come close to knowing.

If you were consulted by the FBI, which is trying to unravel all this, what would you advise them to consider in light of the blackout phenomenon? What should they be alert to?

They need to be aware that it's certainly possible there could have been something that happened that [Kavanaugh] might have no memory of. So if he says something didn't happen and it was supposed to have happened during a heavy drinking episode, then it's possible he has no memory of it. And so therefore they need to find other evidence or ask someone else, because his denial is questionable.

I would also tell them that it's unlikely, at that age and in that context, that this would have happened only once. It's likely he'd have had a blackout on some other occasion. And so there might be evidence of that.

It seems as though this whole phenomenon of blackouts is a really big public health issue. Because people may do things in that state, such as committing sexual assault, that they don't feel personally responsible for later.

The real problem with blackouts is that you don't remember. And so you can't learn from your behavior unless someone tells you that you did something terrible.

Shouldn't public health educators and message-makers address blackouts? Don't teens and young adults need to understand more about this phenomenon? That it's not simply a question of moral failure but it's the way the brain acts in some people, in certain situations?

You're absolutely right. This is not a moral judgment about whether people are drinking too much or not. This is a toxic biological effect of something that you're taking in that affects your brain in this way and makes it so that you can't remember what happened.

A version of this story originally ran on WBUR's CommonHealth.