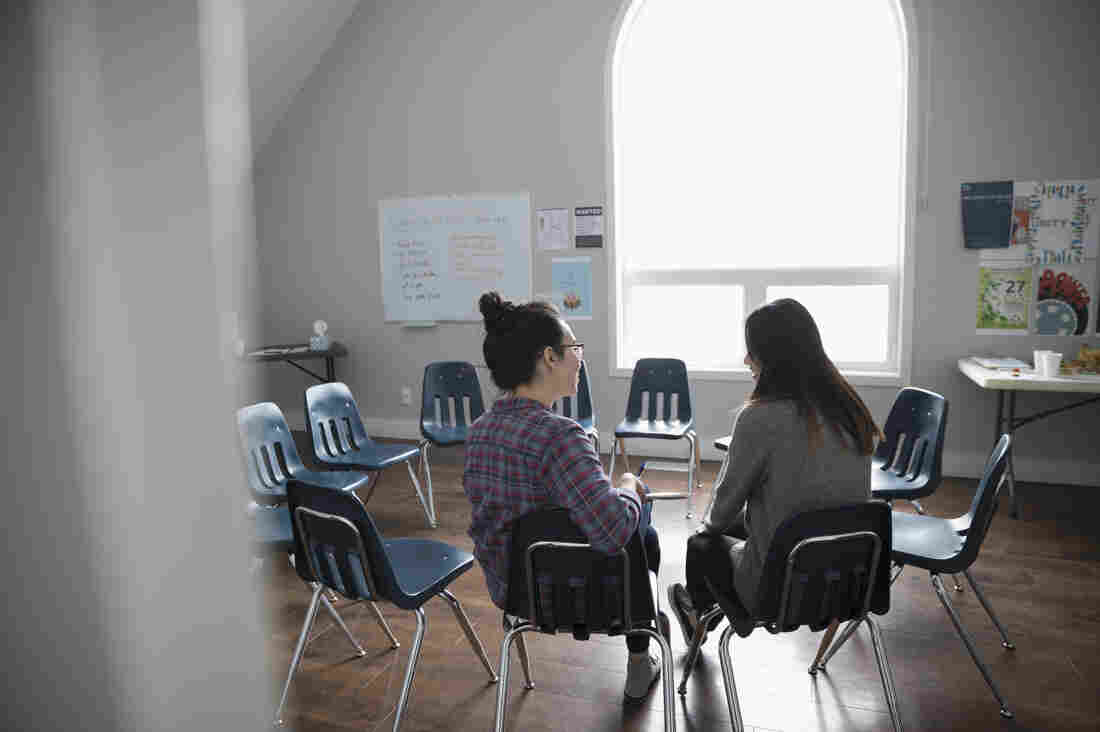 Psychologists find that cognitive processing therapy --a type of counseling that helps people learn to challenge and modify their beliefs related to a trauma — can be useful in healing the mental health problems some experience after a sexual assault. Hero Images/Getty Images hide caption Psychologists find that cognitive processing therapy --a type of counseling that helps people learn to challenge and modify their beliefs related to a trauma — can be useful in healing the mental health problems some experience after a sexual assault.

The wrenching testimony of Christine Blasey Ford, who is accusing Supreme Court nominee Brett Kavanaugh of a sexual assault years ago, raises questions about the long-term emotional and physical toll this kind of trauma takes on survivors and how our society responds to those who come forward long after the assault.

Emily R. Dworkin, a senior fellow at the University of Washington School of Medicine in Seattle, studies how the social interactions of trauma survivors can affect their recovery. She was also the lead author of a paper published in the journal Clinical Psychology Review in 2017 that looked through more than 100,000 studies conducted in the last 50 years and found nearly 200 relevant ones on the relationship between sexual assault and mental health to analyze.

What she found, Dworkin says, is strong evidence that sexual assault is associated with an increased risk for multiple forms of psychological harm "across most populations, assault types and methodological differences in studies." Too many survivors still face stigma and internalize that blame, and that can make it harder to seek help. And while some types of therapy have been shown to be helpful, she says, more information on evidence-based treatments for survivors "is critically needed."

Dworkin talked with NPR about her research findings and offered her perspective on where society and science need to go next to prevent assaults and help survivors heal. Our interview was edited for length and clarity.

You looked at a lot of studies about the mental health impact of sexual assault, but it's not an area as well-studied as say, heart disease. So what do we know?

Sexual assault [any type of sexual activity or contact that happens without the consent of both people] began getting research attention in the '70s as society as a whole was going through a feminist awakening, and it kind of developed at the same time as PTSD [post-traumatic stress disorder], which was then known as "combat trauma." Many things can lead to depression or anxiety. People with PTSD relive the trauma in the form of intrusive memories, nightmares, or even flashbacks. They avoid things that remind them of the trauma.

The symptoms that people were showing when they were coming home from war were the same as victims of rape trauma — recurring memories and a wish to avoid triggering them.

These days, lots of people are doing research, but there's still a lot left to understand. What we do know is that sexual assault is associated with a higher risk for a lot of different mental health problems, including PTSD [and depression, anxiety, substance abuse and suicidality] ... especially PTSD.

What do we know about how ethnicity and education affects the mental health of survivors of sexual assault?

We need to know more. Some of my past research on queer women shows that ongoing forms of stress can compound stress. And we know that people from marginalized groups are just at greater risk for sexual assault [and a number of other health problems]. So it's likely that these groups experience more trauma — but I don't think we can completely say for sure.

How does sexual assault compare with other forms of trauma, in terms of effects on mental health?

We never want to have the Olympics of trauma. But compared to other types of life-threatening trauma, survivors of sexual assault do seem to be more likely to get PTSD. In my preliminary look at the data from 39 studies on this topic, it seems like 36 percent of survivors meet criteria for a diagnosis of PTSD in their lifetime, versus 12 percent of people who don't have a history of sexual assault.

My thinking is that sexual assault is a unique form of trauma. It is highly stigmatized, and when people go to seek help for it, unlike in a car accident — well, the police are not going to ask you if you've really been in a car accident.

Also, people don't always do the most effective job of supporting sexual assault survivors. Sometimes they do things that can actually compound the trauma. In the '70s it was known as "the second rape" when you tell the police, undergo a rape kit exam and explain it to family and friends. They don't always know how to help.

What can survivors who are feeling overwhelmed, depressed and traumatized do to recover, and how can friends and family help?

It's important for survivors to know that they can regain a sense of power over those triggers, and that the most natural response is to push away the triggers. Self-care isn't about turning off those bad feelings, but feeling those feelings so that they can subside naturally.

It's kind of a counterintuitive idea, and it's not what we usually think to do for our loved ones. When somebody's in pain, all you want to do is to take that pain away. It's understandable to try to distract them, take them out for a drink, but it's better to be a shoulder to cry on. You don't need to cheer somebody up in the moment. Be there for them as a witness to their pain.

What about the professionals — the police, the lawyers, the therapists — that survivors need to talk to? How can they do a better job?

This all comes back to ... dealing with the false beliefs we have around sexual assault — blaming the victim, challenging the victim's choices. Changing these cultural norms is important.

One of the evidence-based treatments for PTSD is overcoming the trauma by sharing the story. That's a very different thing than being forced to tell it in public.

I don't want to imply that it's the survivor's fault they have PTSD. And they feel like they don't want to relive it again, which is totally natural. But our bodies can't sustain that intense emotional response for long — those feelings come down naturally.

In my clinical work, a woman came to me with her story of sexual assault. The first time she told it, she was crying. By the fourth time, she was almost yawning. Her story is not one that has power over her anymore. She has the control over whether she's going to have her life altered.

Has the public's perception of sexual assault changed since the Kavanaugh hearings?

I think about this stuff every day. I've been thinking it about every day since I was 18 and beginning my research. It takes me awhile to catch up and realize that everyone else is thinking about it now.

My hope is that we're changing some of the cultural conversation around this.

It's important to know that most of the disorders are very treatable conditions. I do feel like if survivors can get connected to evidence-based treatments, they can be helped — even years later.

What are the resources and treatments that work best for survivors who are experiencing PTSD or other mental health symptoms?

First-line options should be things that we know work well. What I recommend is prolonged exposure therapy [helping people gradually approach trauma-related memories and feelings] or cognitive processing therapy [a specific type of cognitive behavioral therapy that helps patients learn how to challenge and modify unhelpful beliefs related to the trauma]. Both have been around since the '80s and were developed to treat survivors of rape. They have really strong evidence of reducing symptoms or eliminating the diagnosis [of a mental health disorder].

The Many Forms, Faces And Causes Of PTSD

For resources, look for a good therapist who offers cognitive processing therapy. Also, you can check out the Association for Behavioral and Cognitive Therapies [for more information about the treatment].

As a society, what should we focus on to help survivors of assault?

Ending some of our stigmatizing beliefs about sexual assault and our mistrust for people that come forward is huge. It's always up to survivors as to whether they disclose. The fact that we're having these conversations in the public sphere gives me hope.

In schools, [to prevent unwanted sexual advances and sexual assault in the first place] we can teach respect for others and their autonomy. We're not comfortable with the idea of hearing about these sorts of assaults. Our cultural norm is to avoid uncomfortable experiences. ... But we need to keep talking.