Accessibility links
Heroin And Opioid Users Hoping To Quit Turn To Black Market For Suboxone : Shots - Health News This medicine to treat opioid addiction is hard to come by — only a fraction of doctors can prescribe it. So some people trying to quit a heroin habit are turning to the black market for help. 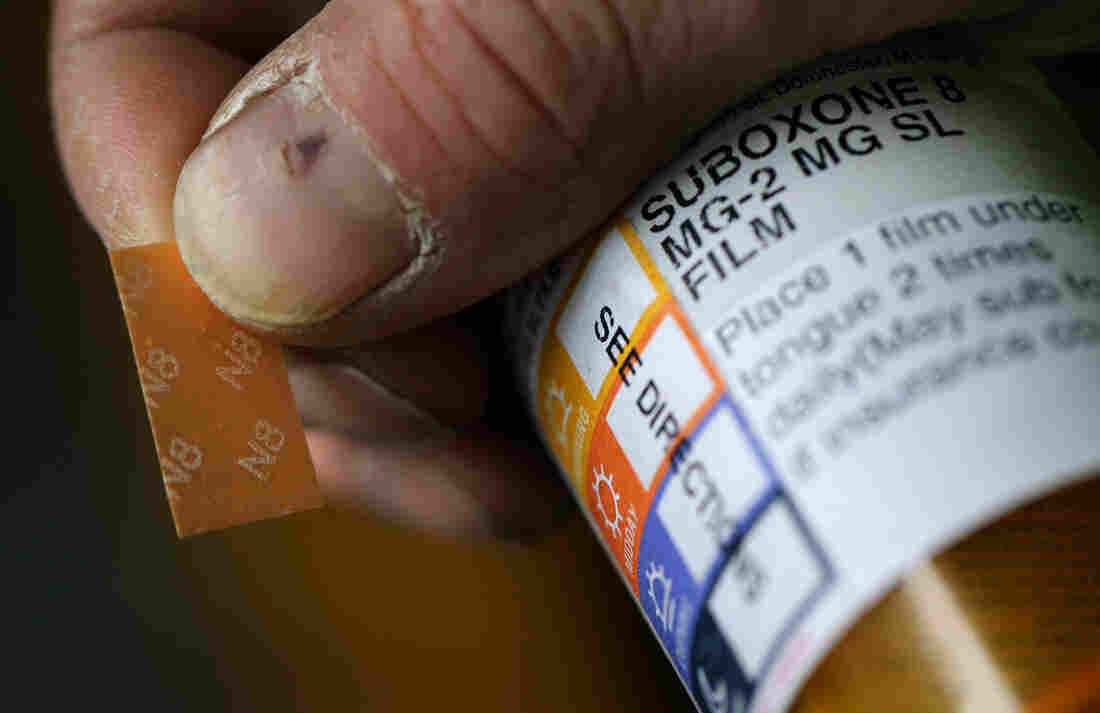 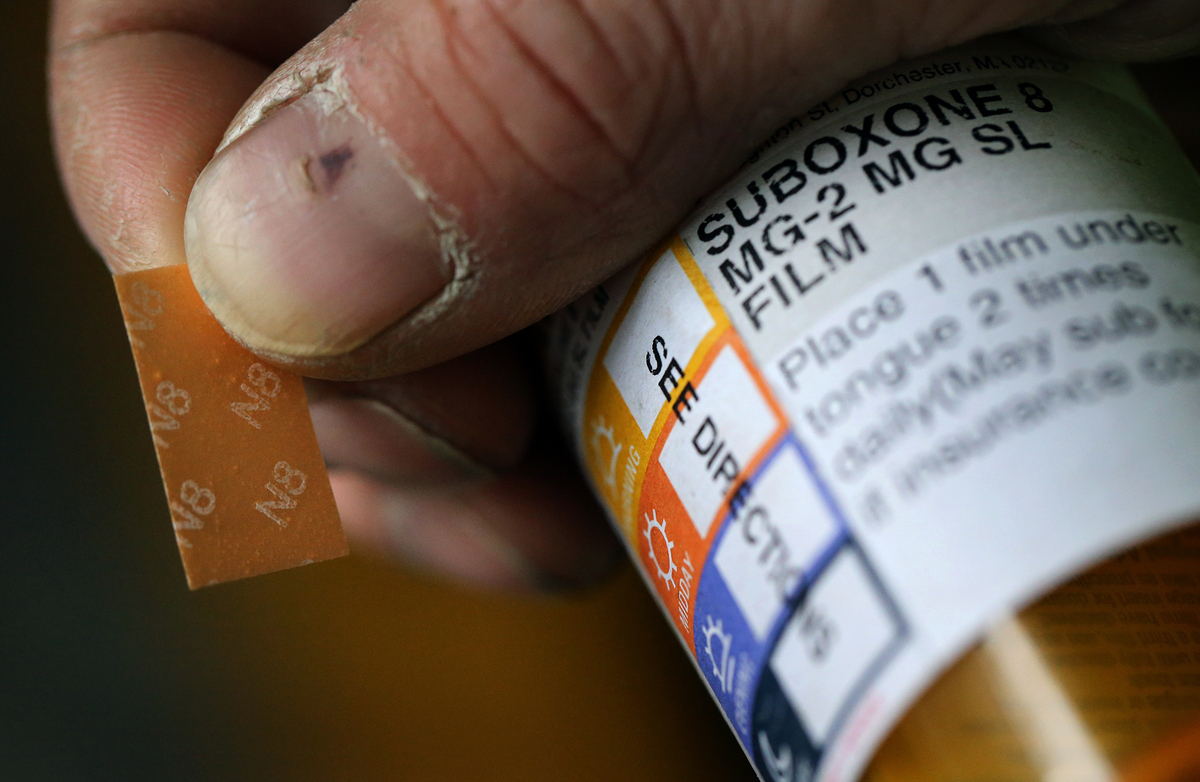 Months in prison didn't rid Daryl of his addiction to opioids. "Before I left the parking lot of the prison, I was shooting up, getting high," he says.

Daryl has used heroin and prescription painkillers for more than a decade. Almost four years ago he became one of more than 200 people who tested positive for HIV in a historic outbreak in Scott County, Ind. After that diagnosis, he says, he went on a bender.

But about a year ago, Daryl had an experience that made him realize he might be able to stay away from heroin and opioids. For several days, he says, he couldn't find drugs. He spent that time in withdrawal.

"It hurts all over. You puke, you get diarrhea," Daryl says.

His friend offered him part of a strip of Suboxone, a brand-name version of the addiction medication buprenorphine that is combined with naloxone. Buprenorphine is a long-acting opioid that is generally used to treat opioid addiction. It reduces cravings for the stronger opioids he had been taking, prevents physical withdrawal from those drugs and comes with a significantly lower risk of fatal overdose.

Daryl injected the buprenorphine, and his opioid withdrawal symptoms disappeared. (Daryl is his middle name, which NPR is using to protect his identity because it is illegal to use buprenorphine without a prescription.)

"At first it felt like I was high," Daryl says. "But I think that's what normal feels like now. I have not been normal in a long time."

Weeks later, the grind of chasing heroin had worn on him. Buprenorphine controlled his withdrawal symptoms longer, and Daryl decided to use it to stay away from other drugs.

Buprenorphine is one of just three federally approved medications to treat opioid addiction. It's an opioid itself, so some people misuse it — they snort or inject the medication to get high. And patients who have prescriptions for buprenorphine sometimes sell or give it away, which is known as diversion. Some policymakers and officials point to diversion as a reason to further increase regulations. Providers already need to be certified to prescribe it, and there's a cap on the number of patients they can give the drug to.

But addiction treatment professionals argue the problem of buprenorphine diversion is often misunderstood. A black market exists in part, they point out, because addiction treatment can be hard to find. President Trump is expected to sign a bill that would increase access to the medication, but it's unclear how quickly that access will grow.

In the meantime, many people suffering from addiction will turn to the black market to try to treat addiction on their own.

It's a weaker opioid

Dr. Kelly Clark, president of the American Society of Addiction Medicine, which supports the measure that would increase access to buprenorphine, believes making the drug more widely available outweighs the risk. For one thing, buprenorphine is not as dangerous as other opioids. "The risks of overdose with buprenorphine are minimal," she says.

It is possible to fatally overdose on buprenorphine — especially if users don't have a tolerance to opioids or they mix it with other substances. But that is rare.

Buprenorphine's effects are less potent than those of heroin and fentanyl, and the medication can block other opioids' effects. It's also typically formulated with naloxone, which reverses opioid overdoses and reduces abuse potential.

Because of these attributes, few people use buprenorphine to get high. Instead, more people use it to prevent withdrawal and to stay away from other illegal drugs such as heroin and illicit fentanyl.

Some leading addiction experts argue that self-treatment with buprenorphine can save lives because it is used in place of more dangerous substances that are blamed for the continued rise in overdose deaths.

"It was not diverted buprenorphine that's responsible for our current situation," says Dr. Zev Schuman-Olivier, an addiction specialist and instructor at Harvard Medical School. "The majority of people are using it in a way that reduces their risk of overdose."

"It's definitely illegal," Daryl says. "But would they rather me be driving to Louisville and picking up two 8-balls of heroin?"

Dr. Michelle Lofwall, an addiction specialist and researcher at the University of Kentucky, says people often try to treat themselves when they struggle to get into real treatment.

"These people want help, and they tried and they didn't succeed. So now they're going to go get it if it's available," she says.

Professional treatment with buprenorphine can be difficult for patients to get. Prescribers need a special waiver to prescribe the medication, and federal rules limit the number of people they can treat, a cap that is specific to buprenorphine.

Federal guidelines changed under the Obama administration to increase the number of prescribers and the number of patients they can treat. Nurse practitioners and physician assistants can now apply for a waiver to prescribe buprenorphine, and doctors who meet certain requirements can now treat up to 275 patients — that's up from the previous limit of 100.

Treating Opioid Addiction With A Drug Raises Hope And Controversy

A new bill on its way to Trump would let more nurses prescribe buprenorphine and allow some doctors who recently got waivers to treat more patients.

Amid these efforts, some law enforcement officials and policymakers have said that more regulation and enforcement actions are needed to stop diversion.

But Basia Andraka-Christou, an assistant professor and addiction policy researcher at the University of Central Florida, says increasing regulations or shutting down prescribers would limit treatment options for people addicted to opioids.

"I guarantee you," she says, "they're either going to go and buy heroin and get high — which surely is not a great policy solution here — or they're going to go buy Suboxone on the street."

This street treatment is not ideal. Patients need a treatment professional to help them figure out the proper dose and to address other mental health needs that are common among people with addiction. But Lofwall says people addicted to heroin or painkillers often realize they want professional help in quitting after trying buprenorphine illegally.

Daryl had that sort of experience. Several weeks after he began using buprenorphine regularly, Daryl tried to sign up for insurance so he could get help — medication and counseling — in staying away from other opioids.

"I think if I had never started [Suboxone] on the street, I wouldn't have no interest in doing nothing but getting high," he says.

Daryl still hasn't made it into treatment. He had trouble starting his insurance, and the market for illicit buprenorphine can be fragile. Daryl struggled to stay away from heroin when the person from whom he bought buprenorphine lost the prescription. Addiction can take years to conquer, and many attempts, but Daryl says his time on buprenorphine allowed him to see a way back to a normal life.

"I'm at a point of my life now where I know I've got to change something, or I'm going to go back to prison," he says. "I'm definitely ready to do something different."

This story was produced in partnership with NPR, Kaiser Health News and Side Effects Public Media. A longer version of the story appears in Side Effects' podcast The Workaround.