Accessibility links
Viagra, Steroids And More Appear In Products Marketed As 'Natural' : Shots - Health News Hundreds of nutritional supplements contain unapproved pharmaceutical ingredients, according to an FDA database. So why isn't the agency doing more to get them recalled? 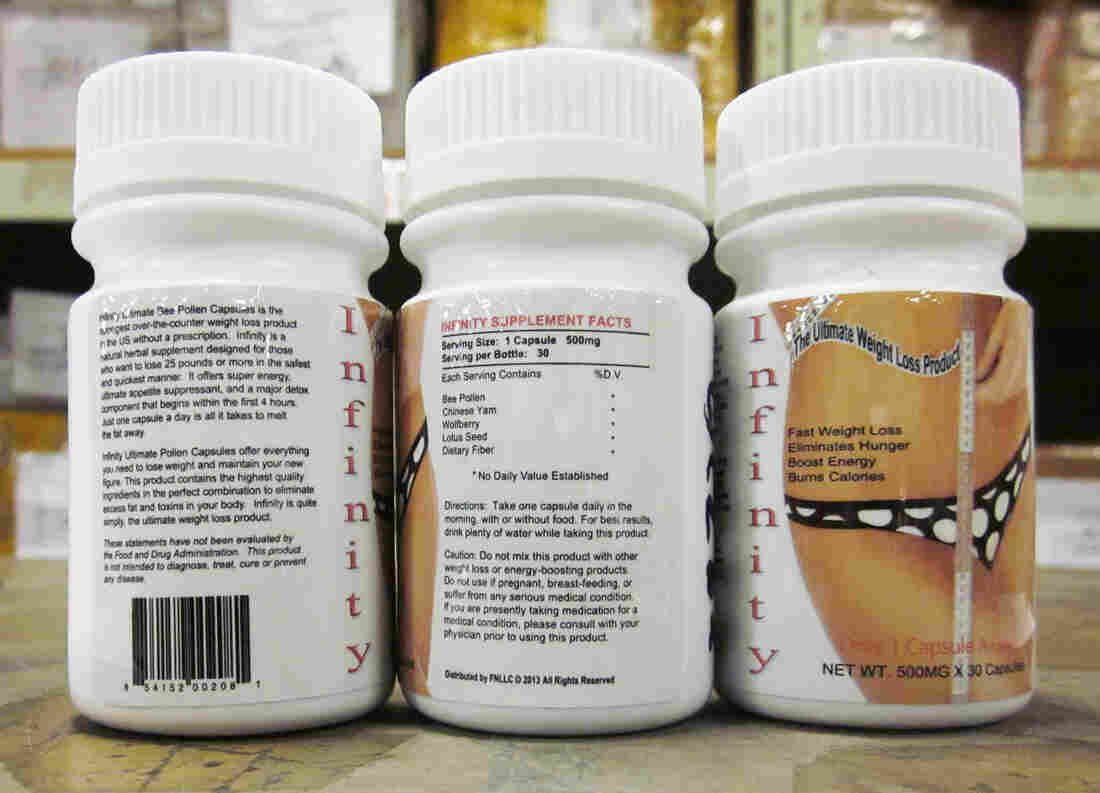 The Food and Drug Administration has identified hundreds of supplements tainted with pharmaceuticals since 2007, the study shows. Courtesy of FDA Flickr hide caption 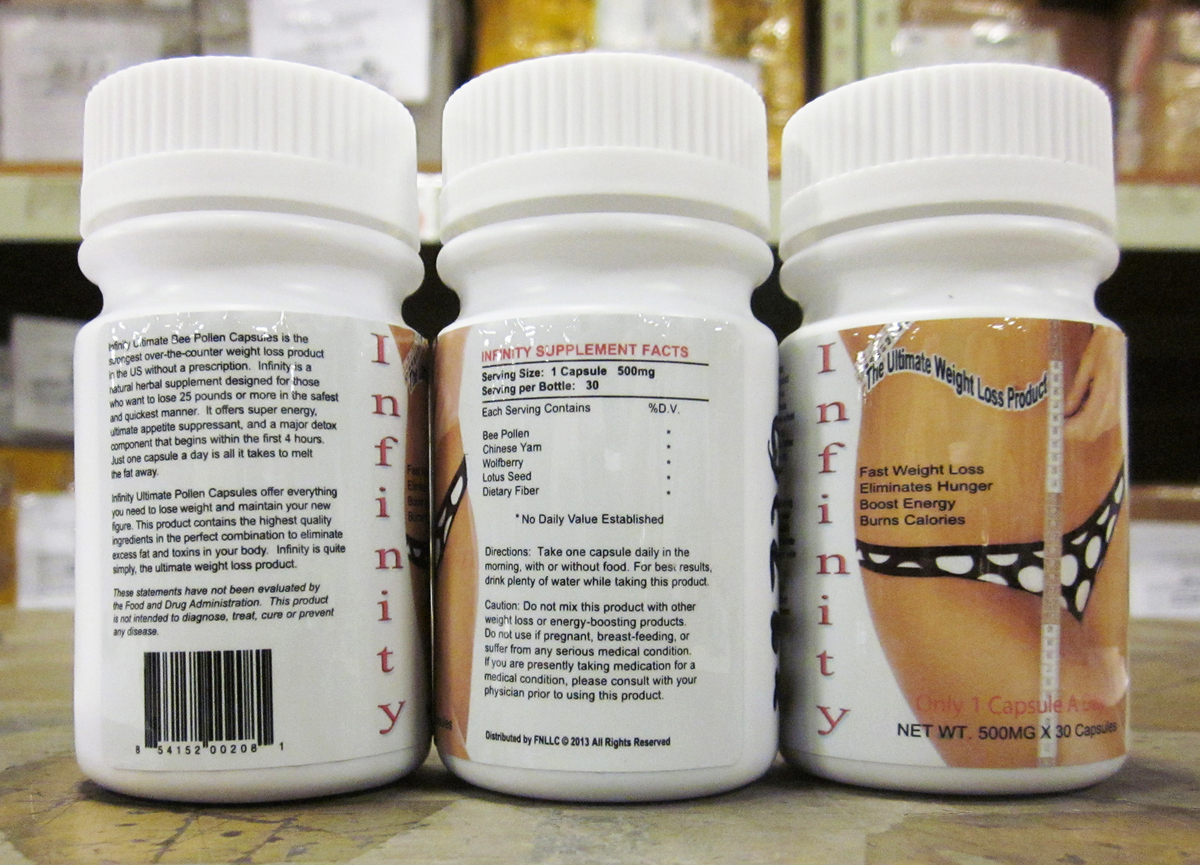 The Food and Drug Administration has identified hundreds of supplements tainted with pharmaceuticals since 2007, the study shows.

They claim to help you sleep, make your hair grow, speed weight loss, improve your sex life and ward off the nasty cold going around the office. Though it's often impossible to tell if dietary supplements work, consumers generally feel certain they can't hurt.

The Food and Drug Administration has identified hundreds of supplements tainted with pharmaceuticals — from antidepressants and erectile dysfunction remedies to weight-loss drugs — since 2007, a study published Friday shows. Even after FDA tests proved the supplements contained unapproved or recalled medications, many of the products continued to be marketed and sold, the analysis finds.

The report in JAMA Network Open calls into question the FDA's ability to effectively police the $35-billion-a-year supplements industry.

"The FDA didn't even bother to recall more than half of the potentially hazardous supplements," says Dr. Pieter Cohen, a Harvard Medical School professor and an internist with Cambridge Health Alliance in Boston, who wrote an accompanying commentary in the journal.

"How could it be that our premier public health agency spends the time and money to detect these hidden ingredients and then doesn't take the next obvious step, which is to ensure that they are removed from the marketplace?" he asks.

The FDA does not comment on specific studies "but evaluates them as part of the body of evidence to further our understanding about a particular issue and assist in our mission to protect public health," says Lindsay Haake, a press officer for the regulatory agency.

For the study, researchers from the California Department of Public Health and other state agencies examined an FDA database containing supplements that the FDA has purchased, tested and found to be adulterated. The FDA identified 746 supplement products that were pharmaceutically adulterated from 2007 through 2016.

Adulterants included unapproved antidepressants and designer steroids, the prescription erectile-dysfunction drug sildenafil, and a prescription appetite suppressant its manufacturer withdrew from the market after a study linked it to heightened risk of stroke and heart attack.

Although the FDA has the power to recall tainted supplements, the federal agency failed to require any of the 146 companies that manufactured the adulterated products to remove them from the market.

The study's authors write that they find it "alarming" that the adulterated supplements continue to be sold.

"This report shines a harsh light on the problem of adulteration," says Dr. Peter Lurie, president of the Center for Science in the Public Interest, a Washington, D.C., advocacy group. Lurie was not involved in the research. "It's a very disturbing picture. You've got hundreds of these products that contain active pharmaceuticals, many of which pose a real threat to human health."

Some of the drugs slipped into supplements without appearing on the label can have dangerous interactions with other medications people may be taking. For instance, drugs such as sildenafil may interact with other drugs to lower or raise blood pressure to dangerous levels. Others, including anabolic steroids present in some muscle-building products, have been associated with liver and kidney damage, heart attacks and strokes.

"The study lays a foundation for ongoing enforcement work in this area, by the FDA and other partner agencies, to curb the illegal manufacture, importation, distribution and sales of adulterated dietary supplements," the California Department of Public Health said in a written statement.

More than half of American adults take supplements such as vitamins, minerals, protein powders, botanicals, fish oils, glandular extracts and probiotics. Under a 1994 law, the U.S. government reclassified supplements as food rather than food additives. The law exempts supplements from any of the premarket safety and effectiveness testing the FDA requires for drugs.

In the 24 years since the law took effect, the supplements industry has boomed.

Most of the adulterated supplements were marketed for sexual enhancement, weight loss or muscle building. Prior research has found products in the same categories were responsible for most of an estimated 23,000 U.S. emergency room visits linked to supplements each year.

As a result, Lurie urges consumers to be particularly cautious about supplements in those groups.

Ronnie Cohen (@ronnie_cohen) is a Northern California journalist who frequently writes about health.