Accessibility links
Trump Team And Drugmakers Tussle Over Whether TV Drug Ads Should Include Prices : Shots - Health News With high drug prices a hot election issue, drugmakers and the Trump administration are jockeying over how to bring prices down. But critics say the proposed fixes don't have enforcement teeth. 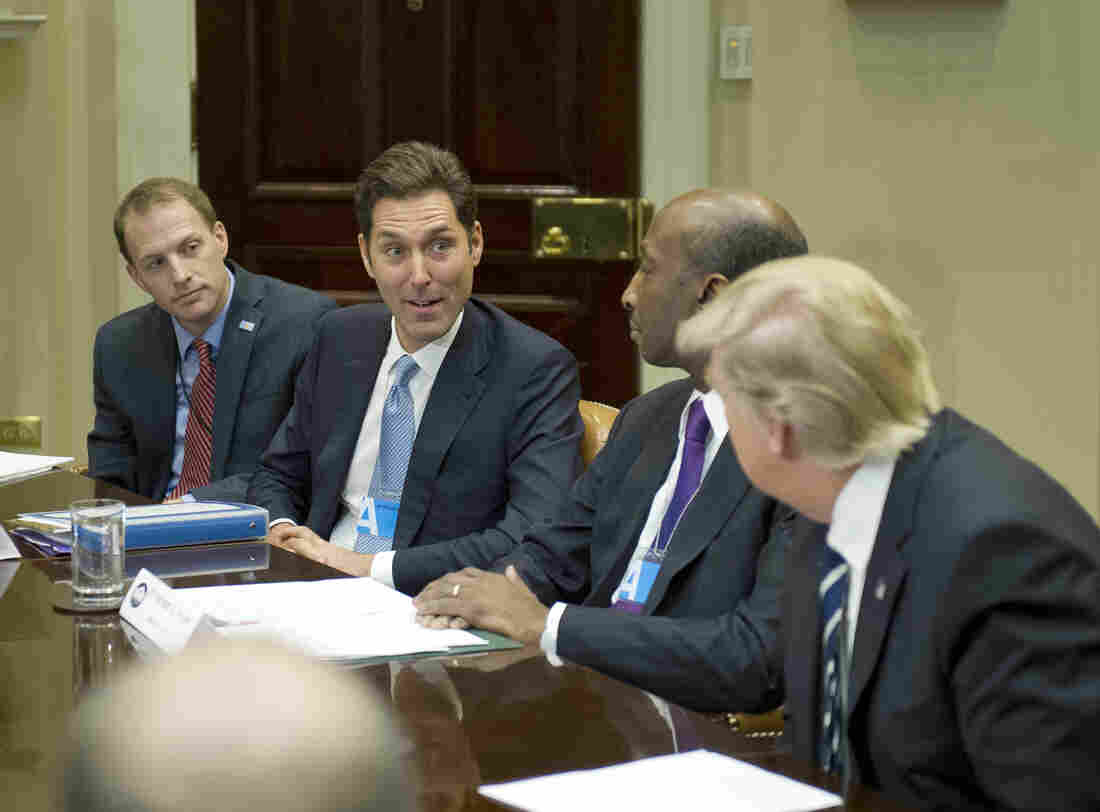 President Trump listens in January as Stephen Ubl, president and CEO of Pharmaceutical Research and Manufacturers of America (second from left), introduces himself during a meeting at the White House. The sky-high prices of some drugs are a big issue for some voters this fall. Pool/Ron Sachs/Getty Images hide caption 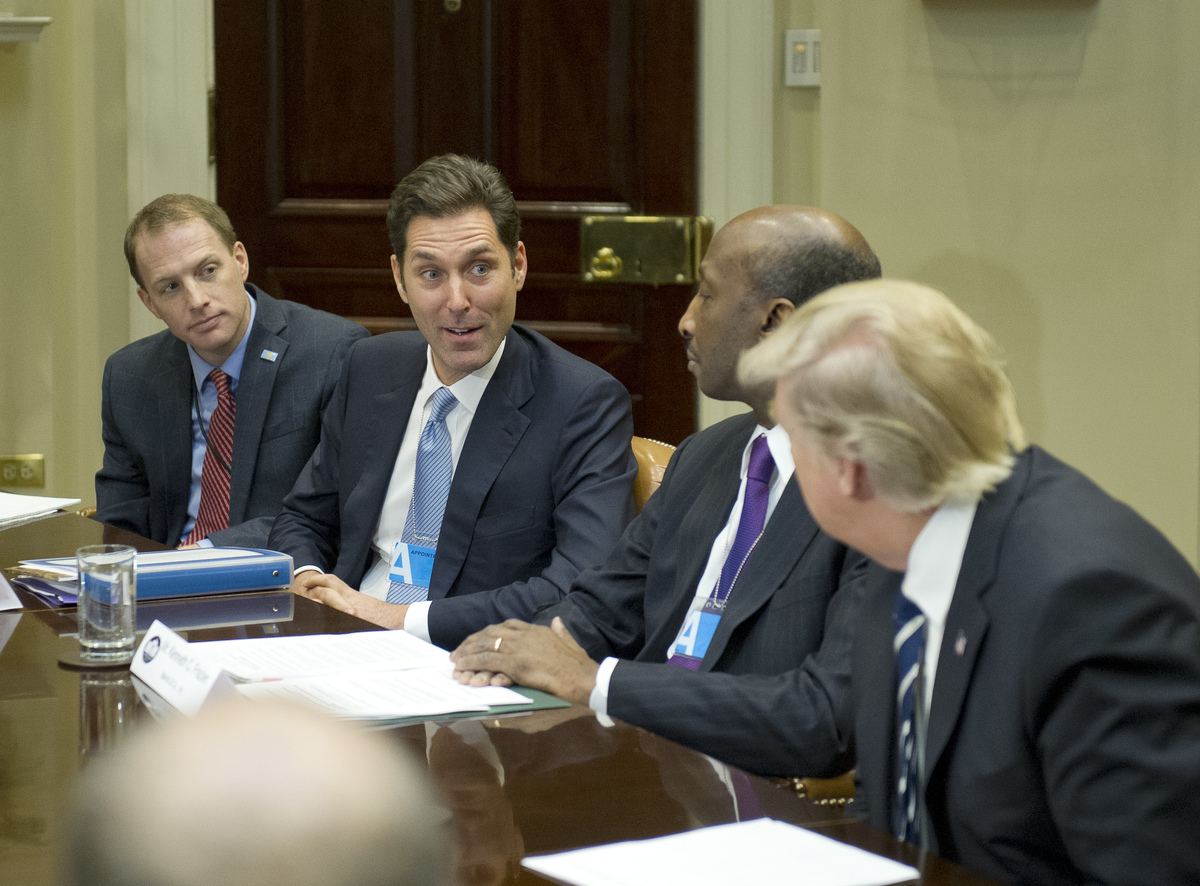 President Trump listens in January as Stephen Ubl, president and CEO of Pharmaceutical Research and Manufacturers of America (second from left), introduces himself during a meeting at the White House. The sky-high prices of some drugs are a big issue for some voters this fall.

The Trump administration said late Monday that it will require drugmakers to reveal the list prices of their medicines in television ads. The move sets the stage for months or possibly years of battle with the powerful industry.

The proposed rule would require pharmaceutical companies to include the price in a TV ad for any drug that costs more than $35 a month. The price should be listed at the end of the advertisement in "a legible manner," the rule states, and should be presented against a contrasting background in a way that is easy to read.

Health and Human Services Secretary Alex Azar, in a nod to an industry proposal announced earlier in the day, said voluntary moves are not enough.

"We will not wait for an industry, with so many conflicting and perverse incentives, to reform itself," Azar told the audience gathered at the National Academy of Science, Engineering and Medicine in Washington, D.C.

Still, critics point out that, even if approved, the proposed rule includes no strong mechanism for forcing the companies to comply. Rather, enforcement would depend on shaming: Federal regulators would post a list of companies that violate the rule. Enforcement would also depend on the private sector to police itself with litigation.

"It is noteworthy that the government is unwilling to take enforcement action," said Rachel Sachs, an associate professor of law at Washington University in St. Louis and an expert in drug-pricing regulation. The rule might never be finalized, she added.

"It will take many months if not years for this regulation to be implemented and free from the cloud of litigation that will follow it," Sachs said. "And the administration knows that."

Earlier Monday, the pharmaceutical industry trade group had gone on the offensive in anticipation of Azar's speech by announcing its own plans.

"Putting list prices in isolation in the advertisements themselves would be misleading or confusing," argued Stephen Ubl, CEO of the Pharmaceutical Research and Manufacturers of America, the major trade group for branded drugs.

Instead, Ubl promised that pharma companies will direct consumers to websites that include a drug's list price and estimates of what people can expect to pay, which can vary widely depending on coverage.

Drug manufacturers will voluntarily opt in to this disclosure starting next spring, he said. Ubl, whose trade group represents the largest pharmaceutical manufacturers on the globe, remained strongly critical of the White House proposal.

The Trump administration's proposal comes weeks before midterm elections in which health care is expected to be a top concern of voters. Polling from the Kaiser Family Foundation suggests most voters support forcing price transparency in drug advertisements. (Kaiser Health News is an editorially independent program of the foundation.)

The White House's plan, which was mentioned in a policy blueprint released in the summer, has won praise from insurance groups and from the American Medical Association.

Sens. Chuck Grassley, R-Iowa, and Dick Durbin, D-Ill., also proposed the plan in the Senate last month, but it failed to garner enough support to get out of the Senate.

Grassley applauded Azar's announcement, saying it was a "common-sense way to lower prices."

But critics of both approaches to price transparency released Monday pointed out a host of complications, suggesting that neither PhRMA's approach nor the White House's would fully explain what consumers would actually pay for an advertised drug.

Dale Cooke, a consultant who works with drug companies trying to meet the Food and Drug Administration's requirements for advertising, warned there is no reason to believe posting prices would help drive down prices.

"No one has ever explained to me why this would work," Cooke said. "What's the mechanism by which this results in lower drug prices?"

Such a policy could actually confuse patients, Cooke said. "Consumers, intimidated and confused by high list prices, may be deterred from contacting their physicians about drugs or medical conditions."

A drug's list price — the metric HHS wants to emphasize — often bears little relationship to what most patients pay at the drugstore. Insurance plans and pharmacy benefit managers often negotiate cheaper prices than the list price. And patients who have health insurance typically only have to pay what their copay or deductible requires. Some patients qualify for other discounts.

However, some consumers could be stuck paying the full list price — depending on how their insurance plan is designed, or if they don't have health coverage.

"The system is very opaque, very complicated," said Adrienne Faerber, a lecturer at the Dartmouth Institute for Health Policy and Clinical Practice, who researches drug marketing. "And importantly," she added, "there isn't a huge relationship between list prices for drugs and what patients will expect to pay out-of-pocket."

Under PhRMA's plan, drugmakers would not have to standardize how they organize or display their pricing information, and that, Faerber argued, could make drug and price comparisons difficult for consumers.

PhRMA also announced it is partnering with patient advocacy groups to create an online "patient affordability platform," which could help patients search for costs and insurance coverage options for particular drugs.

Pharmaceutical manufacturers rely heavily on national advertising, and together represent the third-highest spender of any industry in national television advertising, according to Michael Leszega, a manager of market intelligence at consulting firm Magna.

At certain times of day, pharmaceutical ads make up more than 40 percent of TV advertisements, Leszega said. And those commercials stand out because they are generally longer than other ads — with a long list of side effects and warnings the pharmaceutical industry must tag on at the end.

Those disclaimers highlight another challenge for the Trump administration: legal action.

The rule proposed by the White House notes its legal justification was based on the responsibility of the Centers for Medicare & Medicaid Services to ensure that the health coverage programs it administers — Medicare and Medicaid —be operated in a manner that "minimizes reasonable expenditures."

But that legal argument may be weak, according to Sachs, because most drugs are marketed to a wider audience than Medicare and Medicaid beneficiaries.

A body of Supreme Court decisions dictates how disclaimers and disclosures can be required, said attorney and constitutional law specialist Robert Corn-Revere, an adjunct scholar at the Cato Institute. He filed a "friend of the court" brief in a 2011 U.S. Supreme Court case related to commercial speech and the pharmaceutical industry.

Generally, the administration's requirement must meet the standards of being purely factual, noncontroversial and not burdensome, Corn-Revere said.

On the question of whether requiring drug prices to be listed in advertising violates the First Amendment's free-speech guarantee, Corn-Revere said it "all comes down to the specifics."

Ubl, when asked about the possibility of challenging the administration's proposed rule in court, didn't rule out taking such action.

"We believe there are substantial statutory and constitutional principles that arise" from requiring list-price disclosure, Ubl said. "We do have concerns about that approach."