Accessibility links
Grassroots Battles Continue Over Missouri Planned Parenthood Site : Shots - Health News Two rules have forced closure of all but one Planned Parenthood center in the state. Abortion-rights supporters say it is an example of an "abortion desert" that could result if Roe is overturned. 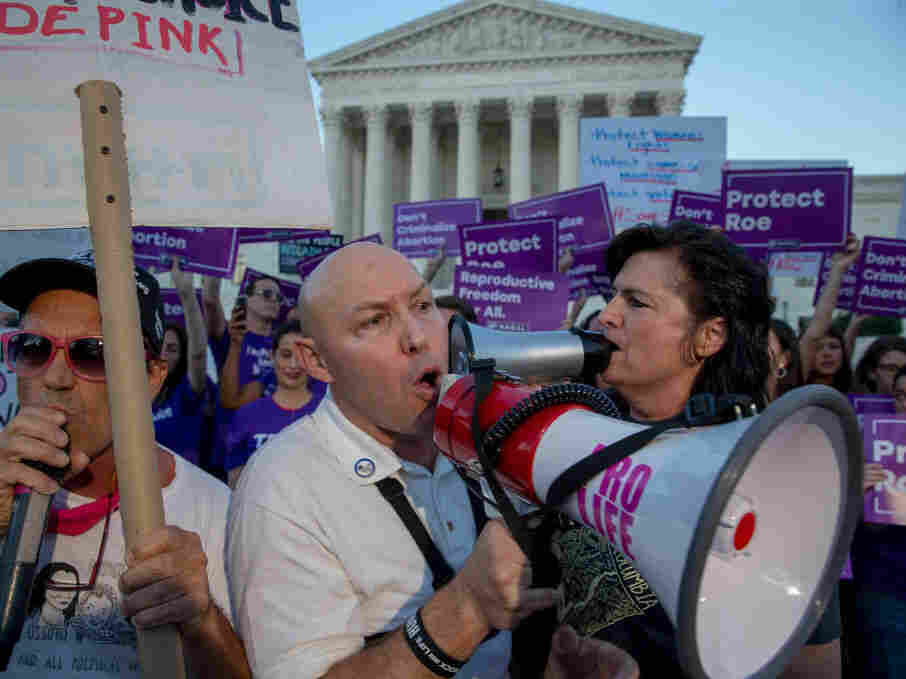 Protesters on both sides of the abortion debate demonstrated in front of the U.S. Supreme Court in July concerning Justice Brett Kavanaugh's confirmation. It is thought that a challenge to Roe v. Wade could have a chance of passing now that he is confirmed. Tasos Katopodis/Getty Images hide caption 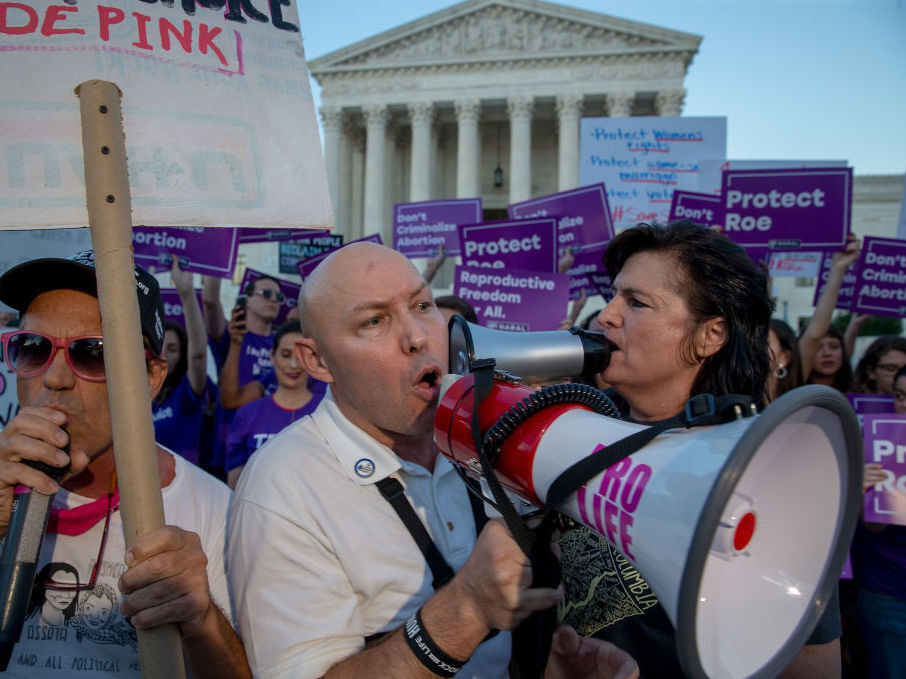 Protesters on both sides of the abortion debate demonstrated in front of the U.S. Supreme Court in July concerning Justice Brett Kavanaugh's confirmation. It is thought that a challenge to Roe v. Wade could have a chance of passing now that he is confirmed.

When Angela Huntington arrived at work on a Wednesday morning in early October, she had to do something she dreaded: turn patients away.

Huntington is the manager at the Columbia Health Center in Columbia, Mo., a Planned Parenthood site that recently had to halt its abortion services in the midst of a highly publicized legal fight in the state.

Since another Missouri law requires a 72-hour waiting period between counseling about abortion and having the actual procedure, Huntington needed to call every patient on the day's schedule. She told them they could come to her clinic for the counseling but would have to go elsewhere for the abortion.

The only other place in the state that they could turn to for an abortion was in St. Louis, a two-hour-drive away.

Many patients didn't pick up the phone. When they arrived, Huntington says, some were in tears after learning they had driven hours to Columbia to find that the clinic would no longer be able to perform the procedure.

"They're already in a tough spot, and then you go and have to tell them this information. It's just heartbreaking," Huntington says. "This is their health. This is their well-being. It's an emotional thing for them."

The battle over abortion rights in Missouri has drawn national attention in recent weeks, after a federal court ruled that two state laws limiting abortion access should stand. One law requires abortion providers to obtain privileges to admit patients to nearby hospitals. The other requires clinics to meet criteria that designate them as outpatient surgical centers.

With Kavanaugh Confirmed, Both Sides Of Abortion Debate Gear Up For Battle

Together, these rules have forced all but one Planned Parenthood health center in the state — the one in St. Louis — to stop offering both medical and surgical abortions, according to Emily Miller, a spokesperson for the organization.

And, abortion-rights supporters in Missouri say, their state is an example of the kind of "abortion desert" that could become more widespread if the Supreme Court overturns Roe v. Wade.

"Columbia is a microcosm of what is happening [nationwide]," says Kristin Metcalf-Wilson, the lead clinician for Planned Parenthood Great Plains, a group of clinics that includes the Columbia facility.

Similar laws — which abortion-rights advocates call "targeted regulation of abortion providers," or TRAP laws — are in place in 24 states. If Roe is overturned, Metcalf-Wilson says, they are likely to proliferate, since Roe is the legal precedent that many judges turn to when invalidating the TRAP laws. For instance, a 2016 Supreme Court decision overturned a TRAP law in Texas on the basis of the rights established in Roe.

"People don't just create their own legislative ideas," Metcalf-Wilson says. "If we allow this to happen in Missouri, it will happen other places."

And that means continued legal battles and on-the-ground activism for advocates on both sides of the abortion debate.

Emily Wales, the general counsel at Planned Parenthood Great Plains, says her team has ongoing litigation against the federal court's ruling in addition to several other laws that make it harder for Planned Parenthood to provide abortions in the state — and is awaiting the court's response.

Wales says neither the admitting privileges requirement nor the ambulatory surgical center requirements are necessary, since abortion is widely considered a safe procedure.

Abortion-rights opponents say the rules help ensure patients have an adequate safety net in place in the case of an emergency.

The state's attorney general's office said in a written statement it plans to "continue to vigorously defend Missouri's commonsense regulations that protect women's health and safety."

Anti-abortion-rights leaders in Columbia are feeling galvanized by the latest legal ruling, after working for years for this outcome, but they also say their work in the city isn't done.

"As long as Planned Parenthood is open in Columbia, we'll still be there offering our services," says Kathy Forck, a director of the Columbia chapter of the 40 Days for Life campaign. "We started praying there, and we were starting to see that we were helping women to choose life."

Forck and her fellow activists have been holding daily prayer vigils on the sidewalk in front of the clinic. She says her group suggests to people walking into Planned Parenthood that they instead go across the street to the My Life Clinic, a prenatal clinic affiliated with the anti-abortion-rights Life Network of Central Missouri. The My Life Clinic did not respond to requests for comment.

Grassroots organizing is central to the anti-abortion-rights cause, Forck says. She says sympathetic people often approach her when she is wearing shirts or pins around Columbia supporting her cause. And she maintains a local email list with 12,000 names on it.

During the 40 Days for Life protests, Forck says, "people go by and give us thumbs up, they honk, they give us hot chocolate if it's cold."

Planned Parenthood of Great Plains Votes — a political organization affiliated with the Columbia clinic — is also focusing on local activism. Cortney Bouse, a community organizer there, says she is working with University of Missouri students in Columbia to speak out about contraception issues on campus.

"Our role is not to tell them what to do but to help and harness their energy," Bouse says, explaining that their focus is "to try and engage more Planned Parenthood patients and younger people."

Bouse says right now, she is working on getting supporters to the polls for the November midterm election. Her team in Columbia is working on what she calls a "relational voter program," where activists encourage their friends and family to vote.

As grassroots and legal battles continue, the clinic in Columbia remains open for primary care and family planning. Huntington, the clinic manager, says her staffers felt frustrated when they had to stop offering abortions, but they see this latest setback as nothing new. The clinic has been the subject of several years of legal battles, protests and counterprotests.

"We're warriors together," Huntington says. "We're here to fight the fight and keep these doors open."