Accessibility links
ACA Insurance Sign-Ups for 2019 Are Starting. Here's What To Expect : Shots - Health News Throughout the U.S., subsidies are available to reduce the price of 2019 policies sold on state and federal insurance exchanges. But promotion of the insurance is varying widely from state to state. 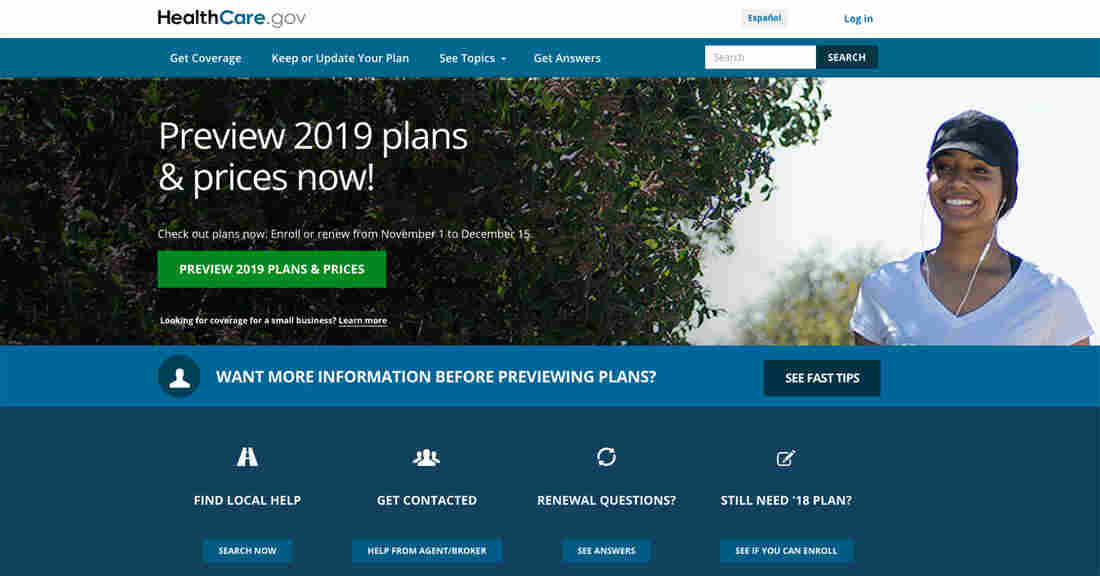 Open enrollment for 2019 health plans begins Nov. 1 on HealthCare.gov and on most state insurance exchanges. Healthcare.gov via Screenshot by NPR hide caption 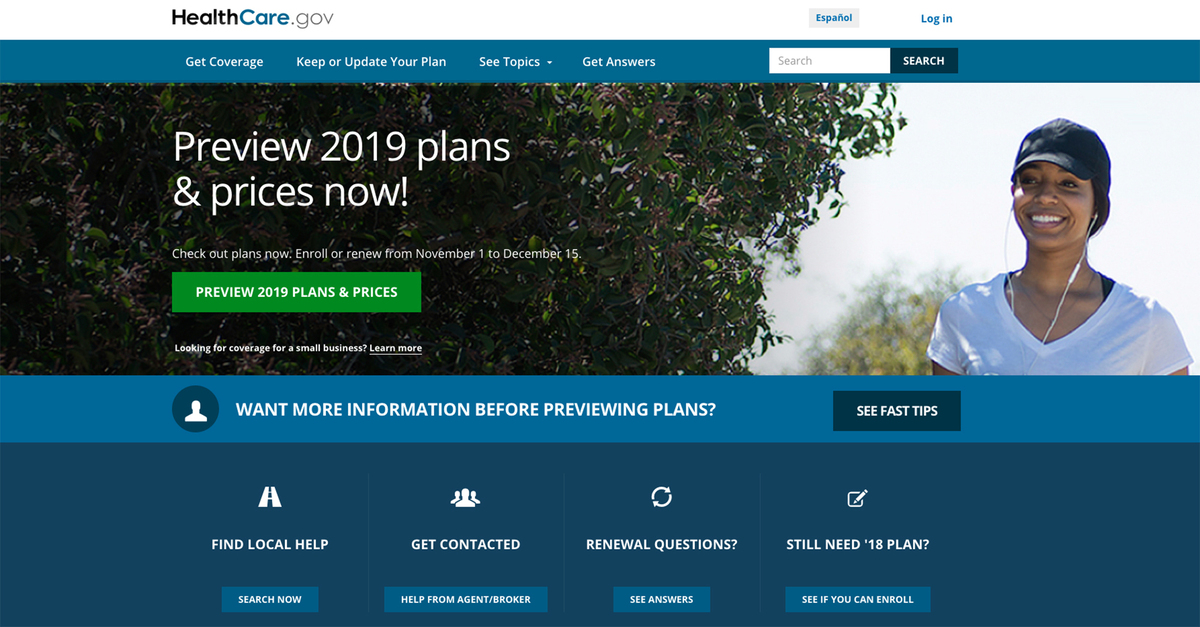 Open enrollment for 2019 health plans begins Nov. 1 on HealthCare.gov and on most state insurance exchanges.

Healthcare.gov via Screenshot by NPR

It's time for consumers who buy their own health insurance to start shopping for policies for next year. Open enrollment for Affordable Care Act coverage starts Thursday across most of the country.

But the shopping and buying experience will vary widely, depending on where people live.

In California, for example, where political leaders have always been supportive of the Affordable Care Act, legislators have allocated $100 million for outreach.

"We're going to be hitting the airwaves with TV, radio, interrupting people's Pandora," says Peter Lee, executive director of Covered California. "That means that in California the average Californian will hear us, see us, be interrupted by us over 50 times this open enrollment season."

That sort of hard-sell is crucial if you want to create lower premiums for everyone, Lee says.

"Look, no one thinks they're going to get sick unless they're already sick," he says. "No one wants to spend dollars today for something they think they're never going to use. You've got to sell insurance" to convince healthy people to sign up.

Meanwhile, in states that rely on the federal government's insurance exchange — mostly conservative states whose leaders opposed the ACA — there won't be nearly as much outreach to potential customers.

The federal Centers for Medicare and Medicaid Services says it plans to spend about $10 million on marketing nationwide. The effort will include email and text messages to consumers and YouTube videos, according to the CMS website. The agency declined to talk to NPR about open enrollment.

Lee worries that consumers will be confused. With all the political fighting around the ACA, he says, many people believe insurance is now too expensive for them, or don't realize they likely can get government help to pay their premiums.

"Every place in America — no matter where you live — the subsidies are there today and people should check and find out if they're eligible for them," Lee says.

In February 2018, nearly 90 percent of people who had insurance through an exchange qualified for subsidies.

The average premium for a benchmark policy for a 27-year-old is about $405 per month, according to the Department of Health and Human Services. But because of subsidies, the average price a 27-year-old will actually pay is $140 per month.

The Trump Administration has made changes to the ACA's rules, including gutting the tax penalty for those who don't buy coverage, and making it easier for some people to buy a short-term policy that doesn't carry all the consumer protections of an ACA policy. Those changes have added to the cost of some ACA plans, according to Cynthia Cox of the Kaiser Family Foundation.

"Insurance companies, when they set their premiums for the coming year, have to show their math," Cox says. "They have to justify each element of what is driving up premiums each year — or driving them down."

The Kaiser Family Foundation analyzed hundreds of filings. And Cox says insurers pointed to the lack of a mandate and the availability of cheaper, short-term insurance to justify their prices. Some companies even mentioned the reduced marketing as as a factor that's driving up premiums.

Those changes, along with regulatory changes made by the Trump Administration last year, have resulted in premiums being about 16 percent higher than they would have been otherwise, Cox says.

In response, some states have made their own changes. In May, New Jersey adopted it's own individual mandate. And California banned the sale of short-term health policies that don't meet ACA standards. Maryland and Alaska have added other programs to stabilize the insurance marketplace. So premiums are stable or even going down in those places, Cox says.

But in Wyoming, it's a different story. That state has the highest average benchmark premium — $709 a month — according to HHS.

"Rural areas have been particularly hard-hit by high premiums," Cox says. "There's not a lot of insurance market competition [there]."

"Our biggest role as navigators is to really ensure that people understand that the ACA is still the law of the land, and that the marketplace will be up and running [as of]Nov. 1," Nicol says.

The deadline to sign up for new insurance on Healthcare.gov is December 15. But some states, including California, have enrollment periods that extend into January.