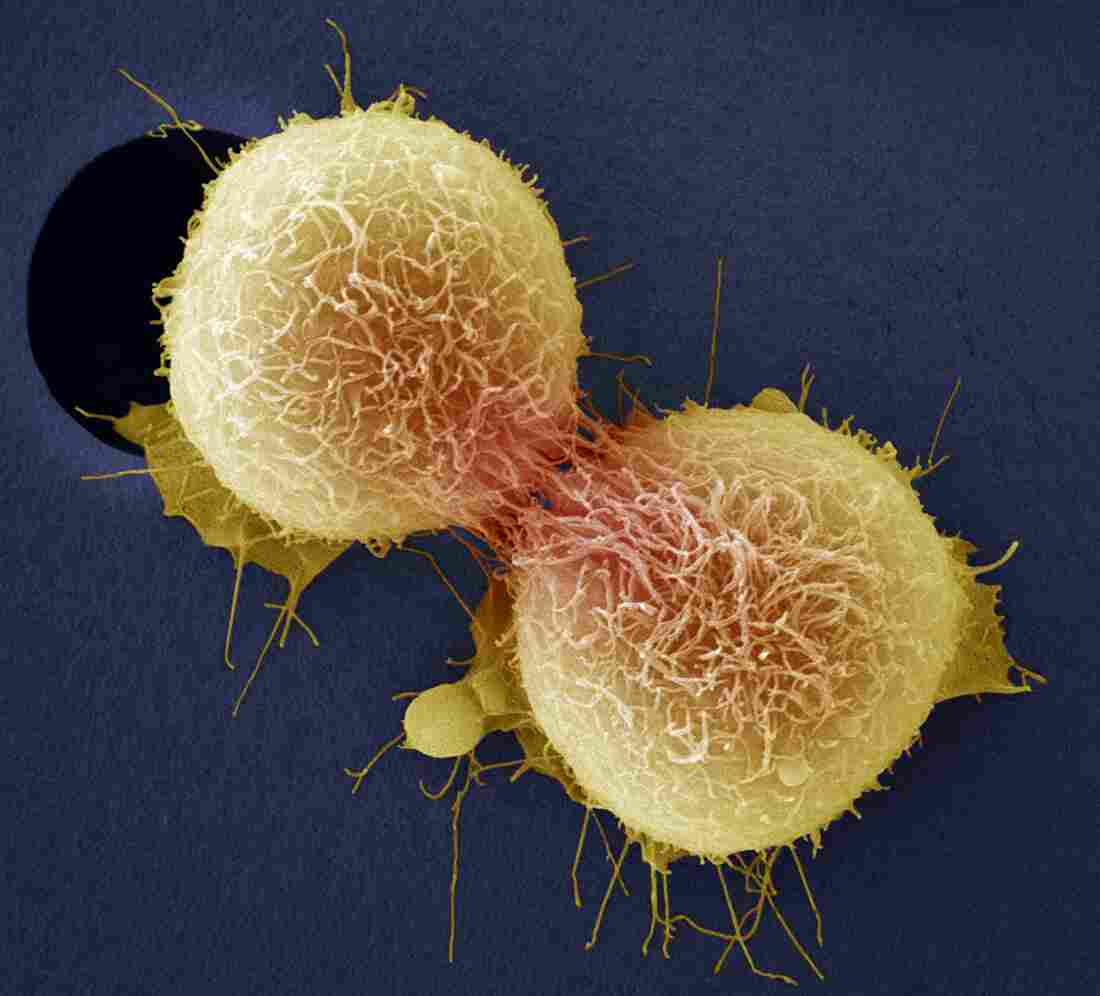 Cancer of the cervix is one of the most common cancers affecting women and can be fatal. Here, cervical cancer cells are dividing, as seen through a colored scanning electron micrograph. Steve Gschmeissner/Getty Images/Science Photo Library hide caption 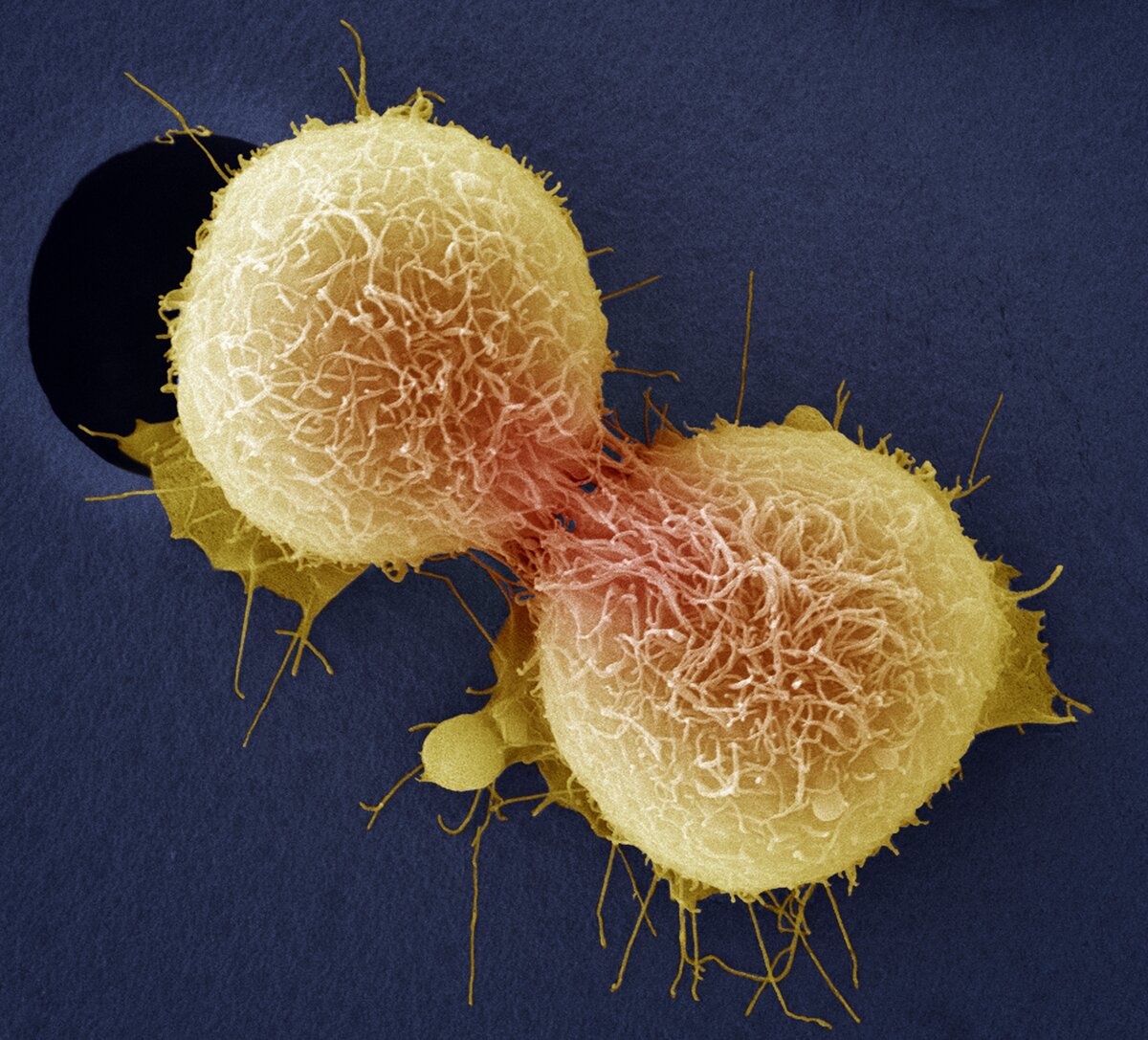 Cancer of the cervix is one of the most common cancers affecting women and can be fatal. Here, cervical cancer cells are dividing, as seen through a colored scanning electron micrograph.

A treatment for early stage cervical cancer that has rapidly gained acceptance in the United States turns out to be worse than standard surgery, according to two studies.

The practice, now thrown into question, is called minimally invasive surgery. Instruments are threaded through small incisions, and surgeons use those to remove a diseased uterus. This technique has been growing in popularity since 2006 and has been widely adopted.

But it turns out that minimally invasive surgery for early stage cervical cancer has unexpected risks. The studies were published online Wednesday in the New England Journal of Medicine.

"Patients who underwent the minimally invasive surgery had four times greater likelihood of [cancer] recurrence than when they had the surgery through the open approach," says Dr. Pedro Ramirez at the MD Anderson Cancer Center in Houston.

That was the surprising result of a study he co-authored comparing the minimally invasive approach with standard surgery though a large incision. The study involved more than 600 women recruited at medical centers worldwide. Half had their uterus removed through open abdominal surgery; the other half had minimally invasive surgery.

A safety board overseeing the experiment called it to a halt before its scheduled completion after it became obvious that women in the minimally invasive group were doing substantially worse.

For Cervical Cancer Screening, Women Over 30 Can Now Choose The HPV Test Only

These women were also less likely to be alive 4 1/2 years following the surgery. About 94 percent of the women were still alive after minimally invasive surgery, compared with 99 percent of women who had standard surgery for the early stage cancers being studied. (Women with more advanced cervical cancer are generally treated with chemotherapy and radiation rather than surgery.)

The research team reported its preliminary results at a cancer meeting in March, and since then, Ramirez says, doctors throughout the United States have been reconsidering their approach to treating early cervical cancer.

What's causing this effect is a bit of a mystery. According to similar high-quality studies, "for uterine cancer, minimally invasive surgery is safe," Ramirez says. That suggests that cervical cancer cells may be released more readily during a procedure. Ramirez says carbon dioxide gas used to inflate the abdomen during this surgery could also be playing a role.

The study was funded in part by medical-device maker Medtronic. Ramirez said the company had no role in analyzing or publishing the results.

Making the outcome even stronger, a second study published alongside this report comes to the same conclusion about minimally invasive surgery for early cervical cancer.

"That is quite a big deal," says Masha Kocherginsky, an epidemiologist and co-author of the study. "These patients are early stage cancer patients, and the intent of surgical treatment is cure."

What's more, the researchers noted that the national survival trend for early cervical cancer, which had been improving for years, started to decline in 2006, just as minimally invasive surgery started becoming popular.

Word of these results has spread among physicians, and as a result the national guidelines are already changing to reflect the risks and benefits of these two approaches.

Dr. Emma Barber at Northwestern says she now tells her patients about the choice they face. "I think increasingly that's going to be open surgery for many women," she says, "but there may still be a role for minimally invasive surgery in some patients."