Accessibility links
After Breast Cancer, Some Women Are Embracing The Choice To 'Go Flat' : Shots - Health News After her double mastectomy, writer Catherine Guthrie came to embrace her new body, without breast reconstruction. But, she has learned, women have to push the medical system to support this choice. 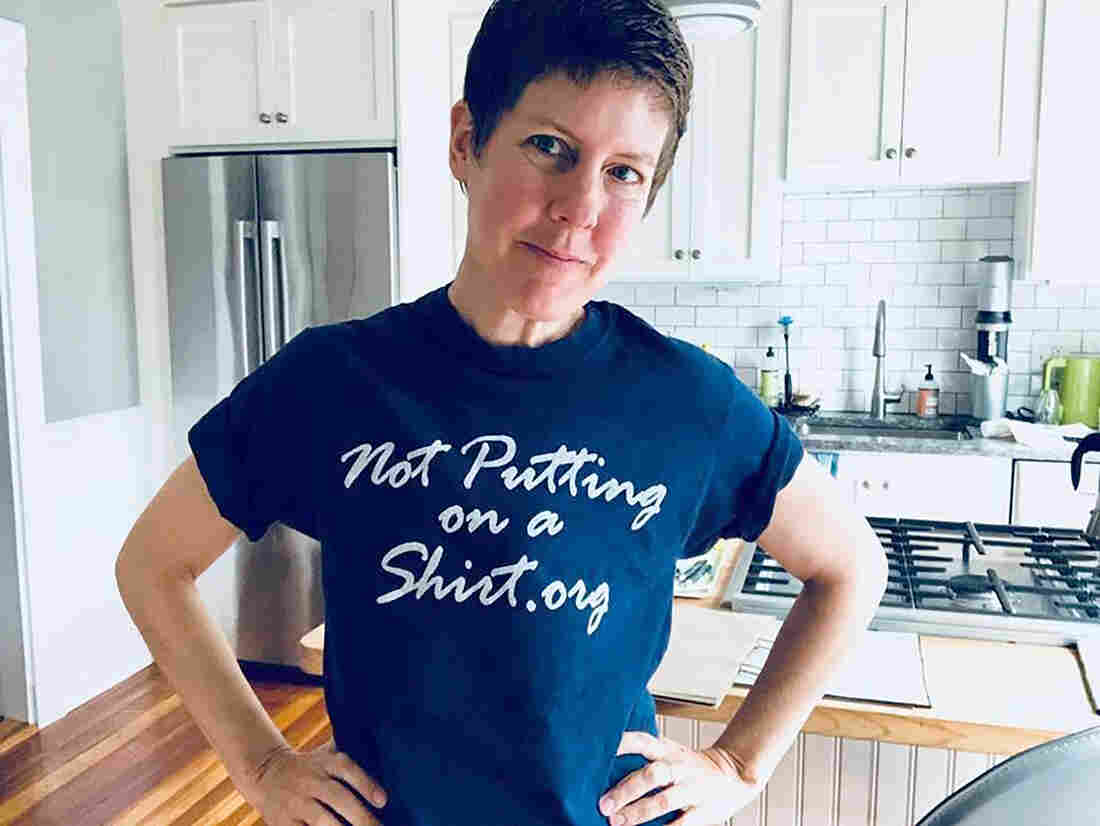 Catherine Guthrie decided not to get breast reconstruction after her double mastectomy in 2009. Not Putting on a Shirt is a grassroots advocacy organization that brings attention to the issue of surgeons disregarding breast cancer patients' wishes to go flat. Courtesy of Catherine Guthrie hide caption 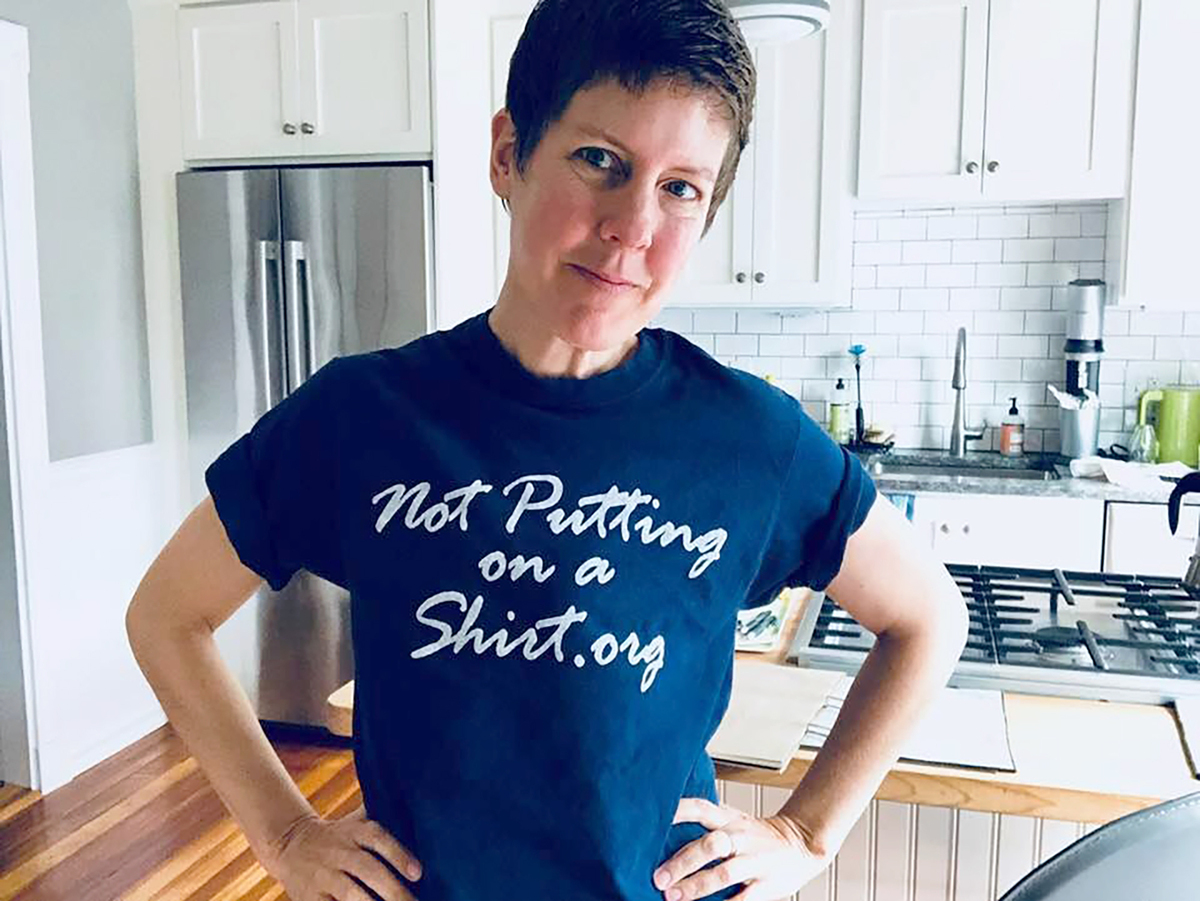 Catherine Guthrie decided not to get breast reconstruction after her double mastectomy in 2009. Not Putting on a Shirt is a grassroots advocacy organization that brings attention to the issue of surgeons disregarding breast cancer patients' wishes to go flat.

Catherine Guthrie already knew a lot about breast cancer when she found a lump on her left breast at age 38.

A women's health journalist, Guthrie had written about breast cancer patients' experiences and had followed the latest treatment innovations. But all of that research could not have prepared her for living through breast cancer — and the choices she would have to make about her body.

In her memoir, FLAT: Reclaiming My Body After Breast Cancer, Guthrie tells of her battle with breast cancer; her relationship with her partner, Mary; and her sometimes-frustrating interactions with the medical system, specifically male surgeons.

FLAT (Skyhorse Publishing) is about Guthrie's journey to feeling comfortable in her own body again after getting a double mastectomy and opting not to get reconstructive breast surgery — after learning it might impair her strength and mobility — and instead choosing to go "flat".

She talked to us about her surgeon's big mistake, how she decided to go flat, and why some doctors just won't accept it when women make that decision.

Your physician made a pretty significant error, causing you to need a second operation just after you had your double mastectomy in 2009. What went wrong?

I went back to my surgeon a week later in order to get the drains [which channel fluid from the surgical site] removed. He removed the drains, and reflexively, I reached up to feel the place where the lump had been in my chest. I just wanted to make sure it was gone.

So I reach up, and my fingers land on the lump. I have no breasts, and yet I have the lump in the same exact spot where it was before my surgery. And I look at my surgeon and I say, "There's a lump here, and I'm feeling it. This is not OK."

He looks at me and says "Oh, I'm sure it's nothing, don't worry about it." I was like, "I'm worried about it right now, and I need you to feel it. I'm not leaving your office today with a lump in the same exact spot as [where] my cancer was." He acted like, "What a pain in the ass you are right now, and this is supposed to be your happy cancer-free moment and you're ruining it."

The surgeon agreed to send me downstairs for a mammogram and things unfolded from there to show that it was indeed the same exact lump — that he had missed it.

What did this experience teach you about the power dynamic in the relationship between doctors and patients?

It kind of reaffirmed in some ways what I've been feeling all along. When you're the patient and you're sitting there in a paper towel, essentially, and you're speaking with a surgeon, the power imbalance is very stark. No matter who you are. I think as a woman speaking to a male surgeon, the power imbalance is greater because of our cultural attitudes toward gender. Then to have the surgeon be dismissive, and kind of wave off my concern as like, "Oh you're just getting hysterical."

There's also a long history of women being treated dismissively by the medical establishment. And it's one thing to know that happens as a feminist and as a woman who writes about these issues, but it's another thing to physically live that experience and to stand up for yourself. It drove me to write the book, and it inspires me to talk publicly to patients and doctors about these issues. 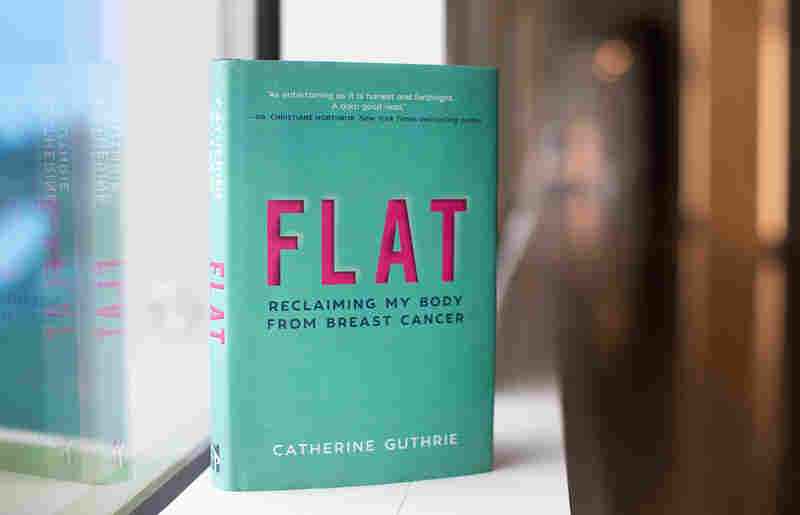 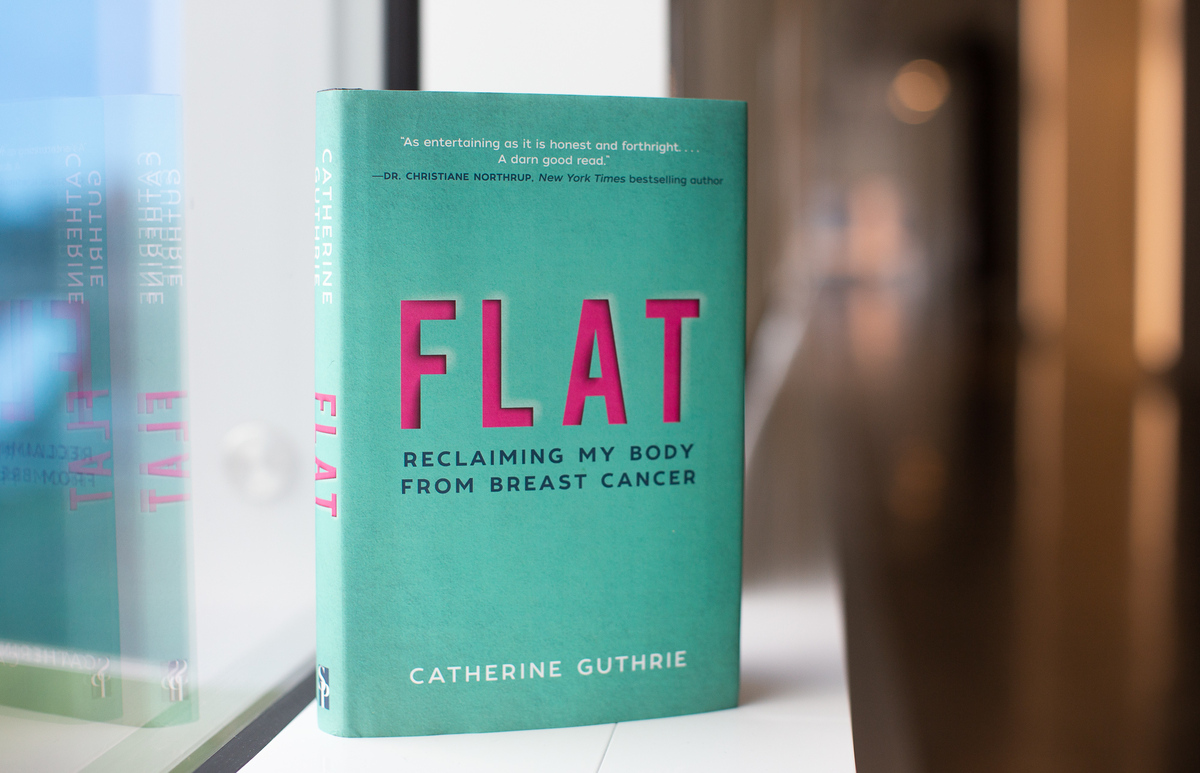 In Flat: Reclaiming My Body After Breast Cancer, writer Catherine Guthrie describes her journey to accepting her new body after breast cancer treatment.

How did you make the decision to go flat, to not get reconstructive surgery? Was it hard to make that choice?

It's always absolutely hard to make a choice to amputate part of your body. When I first found the lump, I thought, "OK, I'll probably get a lumpectomy and radiation." As a health reporter, I knew that was my least invasive option, and it had a really good track record. Because my lump was high on my breast and my breast was small, [I wasn't] a candidate for lumpectomy. [My surgeon] said it would decimate my breast, there would be nothing left.

He immediately switched gears and he said, "Don't worry. Here's what we're going to do: We're going to give you a single mastectomy, and we're going to reconstruct your breasts by severing the largest muscle in your back, cutting a flap out of that muscle, leaving one end of the flap connected to the blood supply in your back, and then wrapping the other end of the flap under your arm until it reaches the front of your body. And then we're going to put a breast implant in the cavity where we just took out all the breast tissue, and then lay this muscle over the breast implant, and that's going to be your new breast."

Wow. That sounds invasive. How did you wrap your head around that?

I was flabbergasted. I looked at him and asked, "Isn't that muscle doing something?" He was just waved his hand like, "Oh, most women never miss it." And I thought to myself, "Ha, that's hard to imagine because this is the largest muscle in the back." In that moment, I knew I would miss it. I'm a very active person, I was only 38 at the time, I was a yoga teacher.

And it was assumed that I would much rather look quote-unquote "normal" in clothes, that that would be my priority over feeling strong and confident in my body. So the only people this rebuilt breast would be for would be strangers. And that's who I was going to sacrifice my strength for, so it quickly made no sense to me to go that route.

And once you made that decision, did your doctors support you?

I was lucky in that my surgeon accepted that choice. I did not get a lot of pushback from the surgeon. I think the hurdle for me and for a lot of women is that the choice to go flat was not presented to me. I had to come up with that idea on my own. When I went home from the conversation with the plastic surgeon, my mind was reeling, and I was thinking, like, "How can I escape the options that he put in front of me?" I'm a big advocate for surgeons putting flat on the menu of options that they offer to women from the get-go.

You've been outspoken about the fact that some women are not having their wish to go flat respected by their doctors. How does that happen?

Recently, maybe a year or two ago, it came to my attention that women were asking their surgeons to make them flat, and during the surgery, the surgeon would change their minds. While the woman was under anesthesia, the surgeon would decide for him or herself, I'm going to leave a little extra skin in case this woman changes her mind. So breast cancer patients are waking up from surgery with excess skin left on their chest after having asked to be made flat. The skin sags and droops — for many women it is like having two empty pillowcases on your chest.

This is discussed all the time in online forums. I talked to eight women it happened to while reporting another story. That this happens on a regular basis is an abomination, it's a violation. And it just says so much about the culture of paternalism and protectionism that certainly exists in the medical system today, and especially among surgeons. Ultimately, they don't trust women to make good decisions about their bodies.

When this happens, do women typically go back for additional surgery?

It's no small thing to have to go back for another surgery. And most insurance companies fight paying for a revision. The average breast reconstruction takes several surgeries, and they pay for that no problem. But if the surgeon messes up your mastectomy and leaves extra skin, and you go back and ask for revision, those women are told that's cosmetic surgery and it's not covered.

So are more women going flat these days?

There's no evidence that the trend is reversing per se. Actually, the number of women who get reconstruction has been going up pretty steadily for lots of reasons, including Obamacare, [which] allowed a lot more women to have insurance coverage. I always say I'm not anti-reconstruction; I'm pro-information. I just want people to have good information.

But what's interesting is that what's happening with flat visibility, especially in the media, is you see more of it. There's amazing stuff happening. People like Tig Notaro being flat and taking her shirt off during a comedy routine – that was a really big move.

I'm not sure everyone appreciates this comparison, but because I'm queer, I compare it to coming out of the closet. More and more women are seeing flat visibility represented in the media. And I think what it's doing is it's allowing women to feel brave. They feel like, "Oh wow, look at what she's doing. She's out there, she's flat, she's bold."

Women are coming into flat groups on Facebook where every Friday it's "Flat and Fabulous Friday." People post their outfits for the day, showing how they're rocking their flat chests. And there's just so much support and excitement and enthusiasm for really cheering these women on as they move into the world and just embrace their bodies.