Accessibility links
FDA Approves Potent New Opioid, Despite Abuse Concerns : Shots - Health News Critics, including some leading anesthesiologists, say the drug is unnecessary, and they worry it will be diverted and abused. The Food And Drug Administration says it is addressing safety concerns. 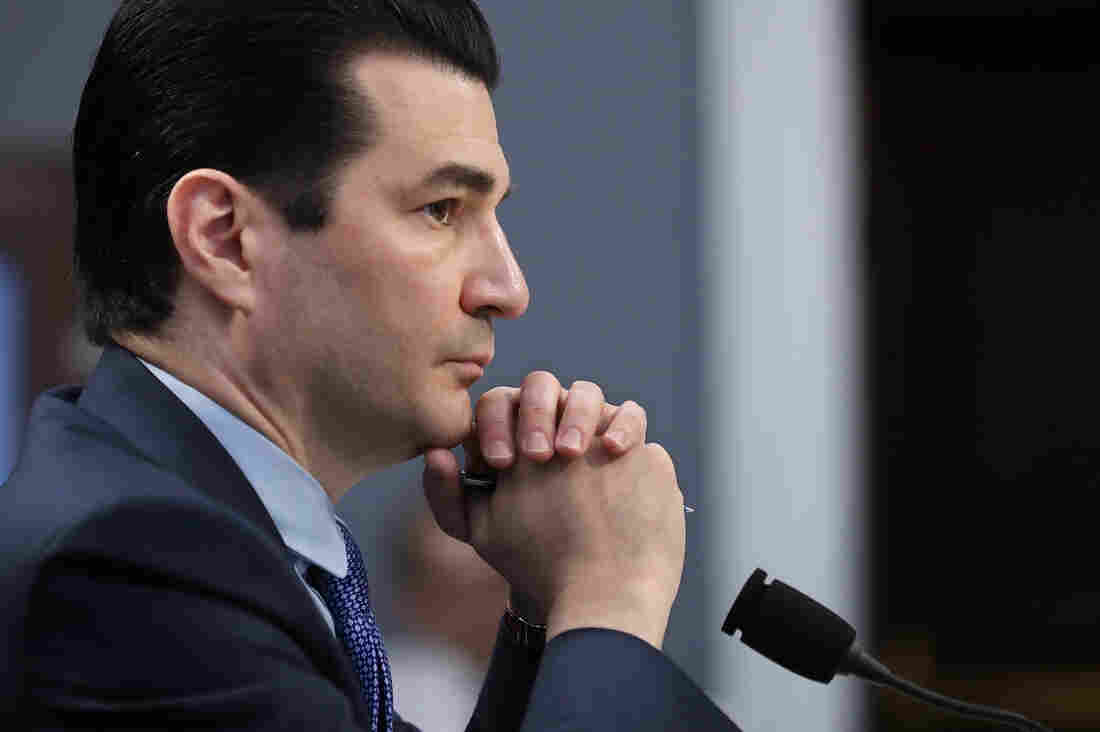 Food and Drug Administration Commissioner Scott Gottlieb, testifying before a House subcommittee in May. There are "very tight restrictions" being placed on the distribution and use of Dsuvia, Gottlieb said Friday in addressing the FDA's approval of the new opioid. But critics of the FDA decision say the drug is unnecessary. Chip Somodevilla/Getty Images hide caption 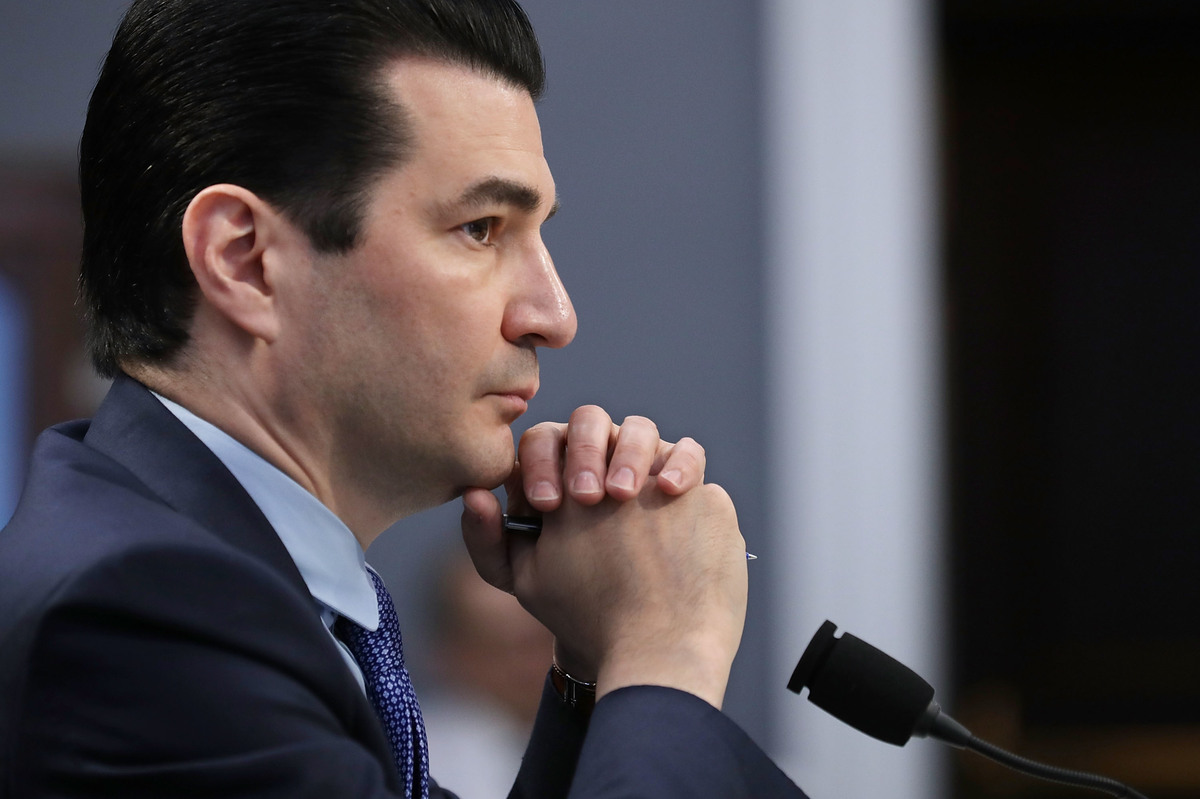 Food and Drug Administration Commissioner Scott Gottlieb, testifying before a House subcommittee in May. There are "very tight restrictions" being placed on the distribution and use of Dsuvia, Gottlieb said Friday in addressing the FDA's approval of the new opioid. But critics of the FDA decision say the drug is unnecessary.

The Food and Drug Administration has approved a potent new opioid painkiller, despite warnings from physician critics who say the drug will contribute to the addiction epidemic.

Dsuvia, a 3-millimeter-wide tablet of sufentanil made by AcelRx, came before an FDA advisory committee on Oct. 12. Such committees weigh in on the safety and efficacy of proposed products, and the FDA generally follows committee guidance in its decisions about drugs. The FDA's Anesthetic and Analgesic Drug Products Advisory Committee voted 10-3 to recommend approval for the medication, and the agency approved the drug Friday.

"There are very tight restrictions being placed on the distribution and use of this product," said FDA Commissioner Scott Gottlieb in a written statement Friday regarding his agency's approval of Dsuvia. "We've learned much from the harmful impact that other oral opioid products can have in the context of the opioid crisis. We've applied those hard lessons as part of the steps we're taking to address safety concerns for Dsuvia."

Insurer To Purdue Pharma: We Won't Pay For OxyContin Anymore

But vocal critics, including the chair of the FDA advisory committee and the consumer advocacy group Public Citizen, had urged the FDA to reject Dsuvia.

In approving the drug, the agency skirted its normal vetting process, these critics say. Dsuvia is an unnecessary opioid, they say, and its size and potency will appeal to people looking to sell or misuse it.

"We have worked very diligently over the last three or four years to try to improve the public health, to reduce the number of potent opioids on the street," says Dr. Raeford Brown, an anesthesiologist at the University of Kentucky. Brown chairs the FDA committee that, despite his disagreement, voted for Dsuvia's approval. "I don't think this is going to help us in any way," he says.

Dr. Pamela Palmer, an anesthesiologist and co-founder of AcelRx, argues that the risk of diversion — when drugs end up with people who are not the intended patients — is low with Dsuvia because it will not be dispensed to patients at pharmacies. Instead, health care providers will only be able to use it in medical centers, she says, arguing that few people misuse drugs from those settings.

"It will not contribute to the large outpatient opioid crisis," Palmer maintains.

While sufentanil is potent, the dose in Dsuvia is premeasured and small: 30 micrograms, or millionths of a gram. And Palmer says the product fills a unique need — health care providers put it under patients' tongues, rather than injecting it or giving them a pill to swallow, which, she says, can take too long to offer relief.

"If you want to get on top of someone's pain quickly, you have to come up with a different route than swallowing a pill," Palmer says. She envisions providers using the tablet when finding a vein is difficult and time-sensitive — in emergency room patients who are morbidly obese, for instance.

The company projects $1.1 billion in annual sales, and hopes to have its product in hospitals early next year.

Palmer also says the Department of Defense helped fund the company's research because Dsuvia could potentially be used on the battlefield instead of morphine.

Dr. Sidney Wolfe, senior adviser to Public Citizen's Health Research Group, dismisses Palmer's claim that Dsuvia meets a crucial need. Along with Brown, the group sent a letter to the FDA expressing concerns about the drug.

"It is not unique at all," Wolfe says, adding that the drug wasn't adequately tested in emergency settings, and that in tests, pain relief with Dsuvia was slow. In two of the company's studies, Dsuvia patients only felt "meaningful" pain relief at 54 minutes and 78 minutes.

"We may find a niche for [Dsuvia] but it's not like we need it, and for sure, at some level, it's going to be diverted," says Dr. Palmer MacKie, assistant professor at the Indiana University School of Medicine and director of the Eskenazi Health Integrative Pain Program in Indianapolis. "Do we really want an opportunity to divert another medicine?"

Though the advisory committee ultimately voted in favor of the drug, Public Citizen contends the FDA sought to "tilt" the vote's outcome toward approval. Brown, the committee chief, who has been outspoken against certain opioids in the past, says he was unable to attend the advisory committee meeting on Oct. 12 because of a scheduling conflict that he had informed the FDA about months in advance.

Brown says the FDA decided to hold the meeting anyway — without him.

"I have strong feelings about the opioid crisis, as someone who lives in the Commonwealth of Kentucky, where we continue to have people die," Brown says. "My forthright nature may have played a role in their decision about how the agency was going to manage this advisory committee."

The October meeting also left out most members of another FDA committee — the Drug Safety and Risk Management Advisory Committee — who are often included in regulatory discussions of new opioid drugs. Public Citizen says members of that committee were not invited to attend.

In an email, an FDA spokesman wrote that drug safety committee members "could not attend due to scheduling conflicts."

On Wednesday, ahead of the FDA's final decision, four U.S. senators — Ed Markey, Claire McCaskill, Joe Manchin and Richard Blumenthal — sent a letter to Gottlieb, the FDA's commissioner, echoing concerns from Brown and Public Citizen and asking the agency to deny approval to Dsuvia until Brown and the full drug safety committee were allowed to participate.

"There should never again be a meeting on opioids that doesn't include drug safety," says Wolfe. "The FDA really screwed up."