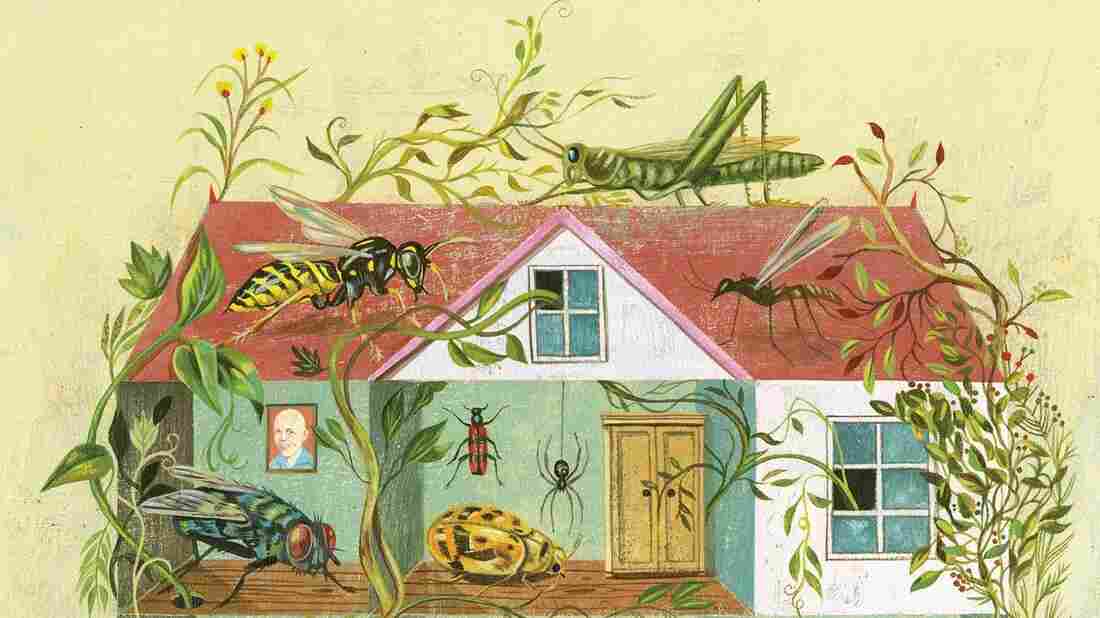 Humans would do better to accept many of the life forms that share our space, than to scrub them all away, says ecologist Rob Dunn. Basic Books hide caption 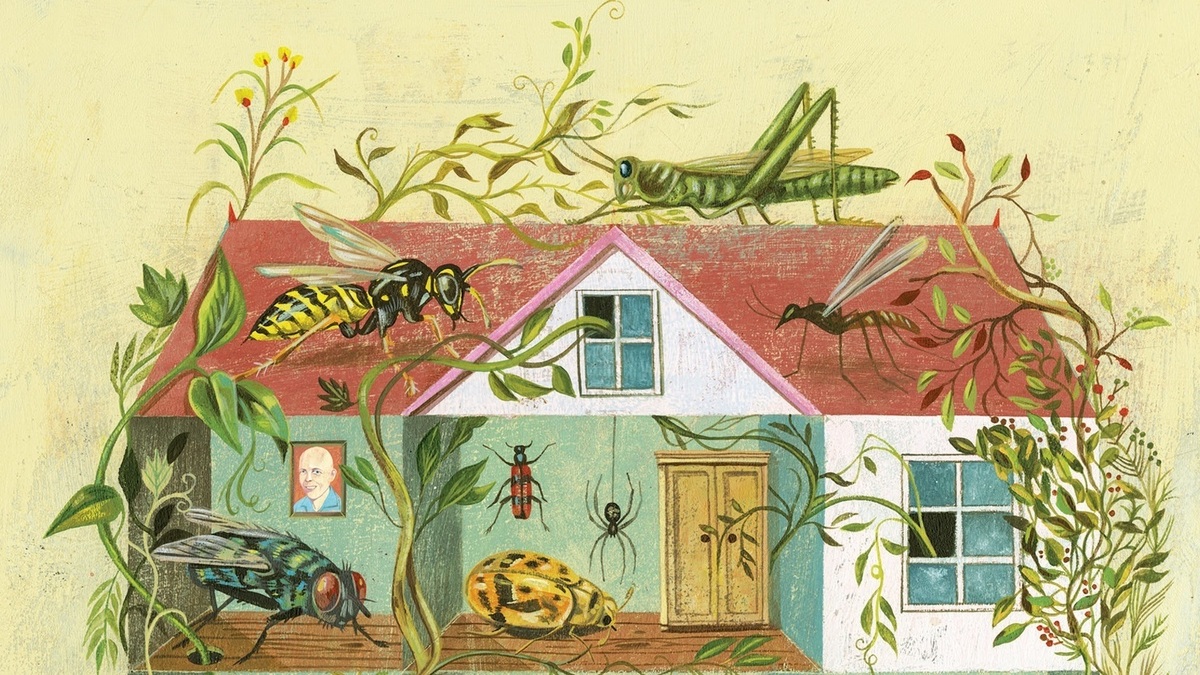 Humans would do better to accept many of the life forms that share our space, than to scrub them all away, says ecologist Rob Dunn.

You may be shocked by what's living in your home — the bacteria, the fungi, viruses, parasites and insects. Probably many more organisms than you imagined.

"Every surface; every bit of air; every bit of water in your home is alive," says Rob Dunn, a professor of applied ecology at North Carolina State University in Raleigh. "The average house has thousands of species."

Dunn started out studying microorganisms and insects in rain forests, but his focus gradually shifted toward backyards and houses. "I eventually found myself in homes with the realization that a lot of what I'd done in jungles ... we could do under the bed and showers," he says. "And we were making the same kinds of discoveries I'd make in Bolivia or Ghana or Australia or anywhere else."

From Microbes to Millipedes, Camel Crickets, and Honeybees, the Natural History of Where We Live

Title
Never Home Alone
Subtitle
From Microbes to Millipedes, Camel Crickets, and Honeybees, the Natural History of Where We Live
Author
Rob Dunn

Dunn's new book, Never Home Alone, describes the tiny life forms he's found living in different parts of the home, including on floors and water faucets and in basements and heating, ventilation and air conditioning systems.

Dunn warns that, too often, people attempt to scrub away all microbes — without considering that some of the organisms may actually be beneficial. Take antibacterial soaps, for instance. Dunn notes that although antibacterial soaps kill pathogens, they also tend to favor some bacteria that are harmful to humans.

"They're really a great example of where we've gone too far in trying to kill everything around us, and it's had unintended consequences," he says.

Instead, Dunn suggests that humans would do better to accept the microbes that share our space.

"Our bodies don't exist but for the species that live on and in them," he says. "We can't scrub ourselves free of the rest of life. I hope to be never alone in that sense — to be really isolated from the rest of life would be a very sad thing."

On bacteria that live in showerheads

If you unscrew an American-style showerhead — where you have that pipe going into the showerhead and you can just unscrew the tip and then look into the showerhead — what you'll see is a kind of gunk on the inside of the showerhead. That's a biofilm, which is kind of an apartment that the bacteria collectively excrete and then live in. And it keeps them buffered from the flow of water, and so they make that little apartment and they live there. They eat essentially the nutrients that are flowing in the water, through the tap toward you. So when you shower, that's right above you, and a little bit of that breaks off each time you're showering and sort of sprays down onto you. Mostly that's harmless, but there's a group of bacteria called nontuberculous mycobacteria, which are relatives of leprosy and tuberculosis, and those sometimes establish in those biofilms....

People who are on municipal water supply — cities like Philadelphia and New York — that are heavily chlorinated, that chlorine seems to kill most of the bacteria in the water system. But it leaves those nontuberculous mycobacteria alone because they're chlorine-tolerant. So it kind of creates a world in which they can live happily without much competition. On the other hand, in well water (from rural environments or municipal water from some of the European cities that don't treat their water with chlorine), the mycobacterium seems very, very rare. And so we're accidentally making them common by trying to kill everything.

One place that fungi actually start to pose problems is in your walls. It's been known for a while that if your house gets wet there's suddenly a bunch of kinds of fungi that show up kind of miraculously out of nowhere and grow super quickly. And one of those is this toxic black mold that people worry a lot about. But, interestingly, although lots of money is made on doing abatement of that mold, nobody had really figured out what was going on with this basic biology — until a few years ago when the scientist Birgitte Andersen started to try to figure out, 'When that mold shows up in houses, where has it come from?' ...

So what [Andersen] did was to look at brand new drywall right from the factory to figure out, 'In that drywall, are there already some fungi?' And she was able to show that that toxic black mold — along with several other fungi — basically come preloaded in your drywall. And then they wait in your drywall for months, or years, or however long it takes for the drywall to get wet. And then, once the drywall gets wet, they can eat your house from bottom to top with great joy and a little bit of laughter, I think. And so that's when the problem emerges, and nobody really had any understanding of that until a year and a half ago.

How The Microbes Inside Us Went From Enemies To Purported Superhealers

On bacteria that live in our armpits

I find armpit bacteria fascinating. We actually have these glands in our armpits that are not really sweat glands. Their only job is to feed armpit bacteria. So, you have very special microbes in your armpit that, historically, must have had a pretty important role that we still don't really understand. Because those glands are feeding those bacteria so much, we shed lots of those microbes around the house.

I actually think it's pretty likely that those are some of the microbes that are most important in defending us against pathogens. If you think about your body, it's not actually just covered in skin — the outside layer of your body is totally microbial. If a flu virus lands on your hand, the first thing it encounters is not your immune system; it's the layer of your microbes on your hand. I think that some of what those glands are doing may be to feed some of the microbes that best defend us from some of those things we actually have to worry about.

On the microbes cats and dogs bring into our homes

Cats and dogs (and especially dogs) have a huge impact on what's in your home. ... They affect the microbes everywhere in the house. Their microbes drift up and around all over the place. We can actually identify whether or not there's a dog in the house just based on the microbes — 99 percent of the time. And cats have an effect, too, but it's more subtle. ...

We can actually identify whether or not there's a dog in the house just based on the microbes 99 percent of the time.

It's hard to know which effects the dogs and cats and their microbes are having, and they can be very complex. But one of the things we see is that people, especially in urban environments with dogs, tend to have kids who are less prone to allergy and asthma. One of the things that we think may be happening is that the dogs are actually a vehicle for the connection of those kids to just a little bit of nature. In these environments in which we've isolated ourselves so much from the rest of the world ... the dirt on our dog's paws may be enough connection to forestall allergy and asthma at least a little bit. We don't see that effect with cats, but with dogs it's pretty strong. By the same token, dogs in rural environments seem to have less effect on allergy and asthma. We think that's because in rural environments you're getting so many other exposures to nature that the dog matters a lot less.

It's not there now, but I look forward to a time when we can essentially garden our homes — fill them with species that benefit us and push out the species that don't. The closest I think we come to that is in the context of making fermented foods. We study sourdough bread a lot. When you make a sourdough starter, that starter has a bunch of microbes that produce lactic acid, and that lactic acid is key to the starter, but it also kills off any other bacteria. And so it's kind of a garden that weeds itself. And for me, that's a metaphor for what we'd like to have in our homes.