Accessibility links
Vicarious Trauma For Doctors And Nurses Who Treat Victims Of Gun Violence : Shots - Health News Researchers are trying to understand how exposure to trauma cases affects clinicians and how they can get the mental health care they may need. For now, there are more questions than answers. 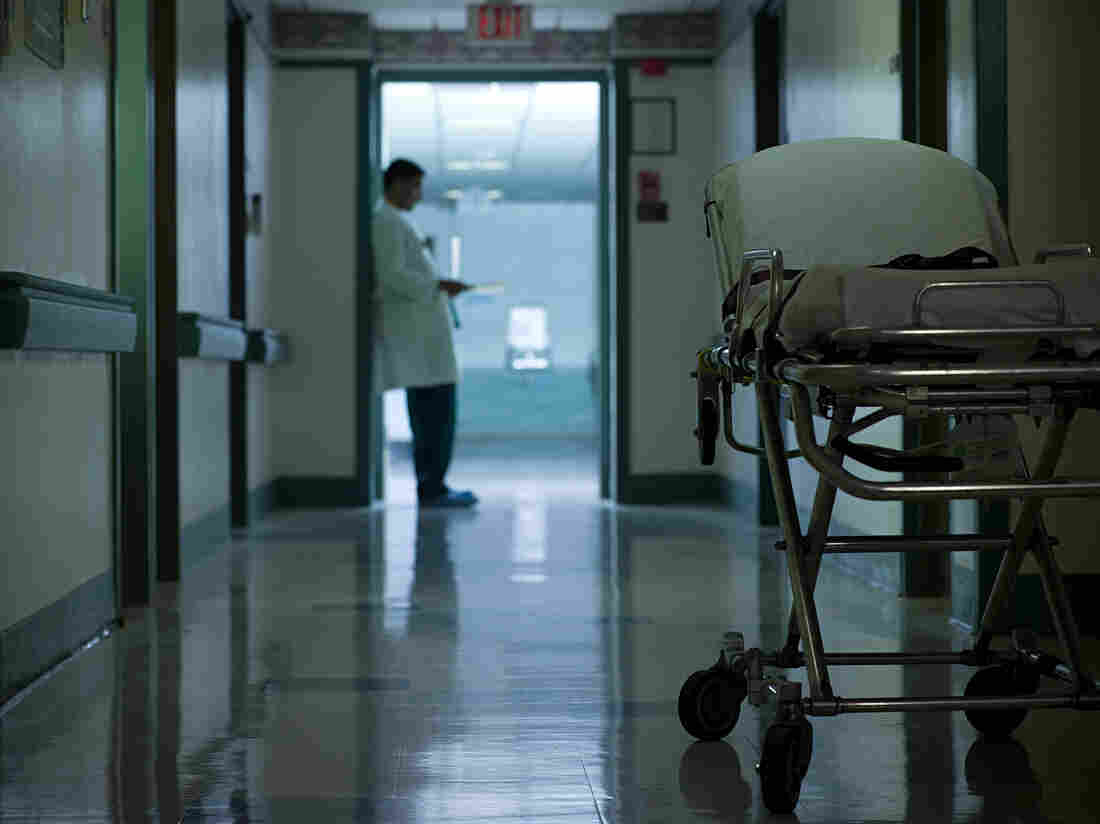 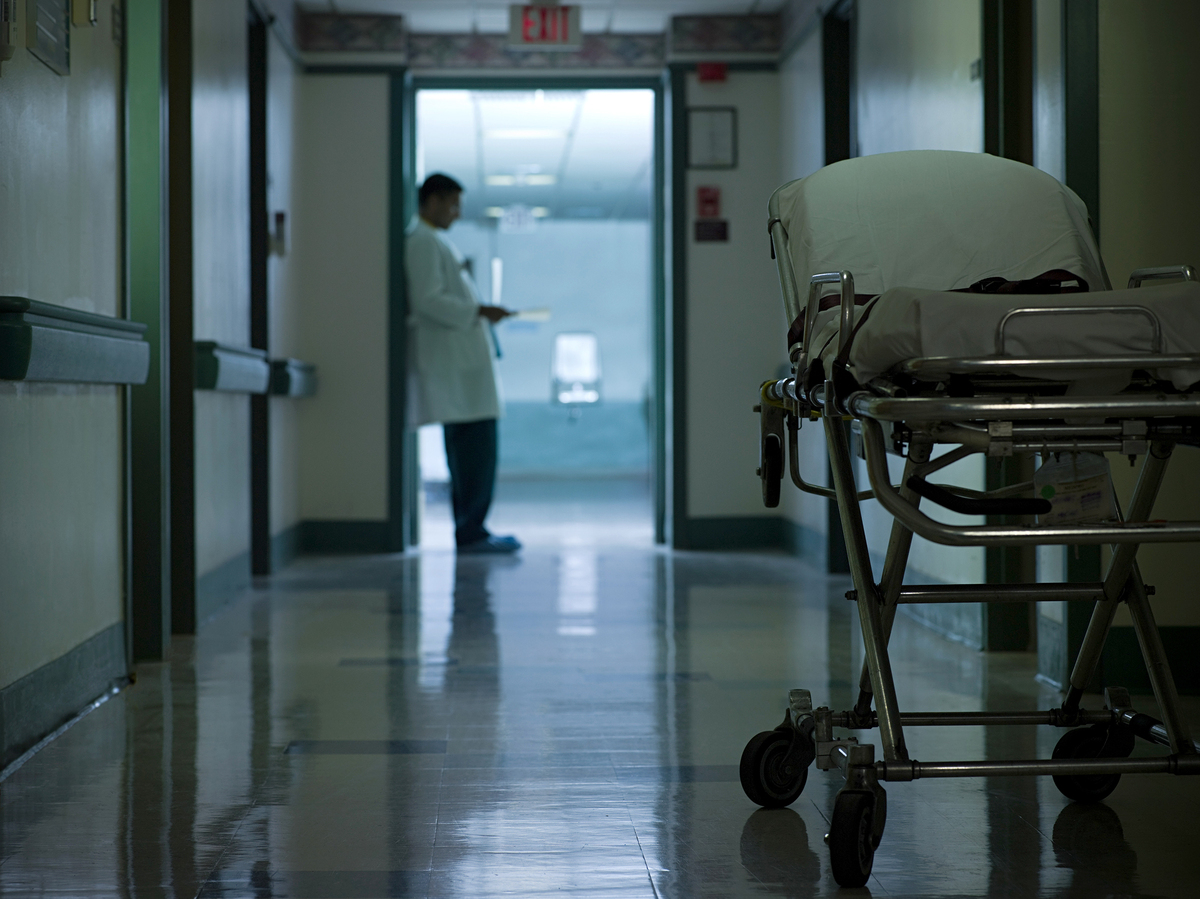 Gun violence has become a part of everyday life in America and of the work lives of doctors, nurses and first responders, too.

After the National Rifle Association told doctors to "stay in their lane" in response to a policy proposal from the American College of Physicians for reducing gun-related injuries and deaths, there was a backlash. Health care professionals shared heart-wrenching stories about treating people harmed by firearms.

How do doctors and nurses cope with their regular encounters with the human toll of gun violence? How does exposure to trauma affect them?

Trauma surgeon Stephanie Bonne estimates that she and her colleagues at University Hospital in Newark, N.J., see about a thousand gunshot wounds and stabbing injuries annually.

She has learned a few things over the years to help make her job easier.

Her clothes are often bloody after operating on someone who has been shot. She makes sure to keep an extra pair of clean scrubs on hand so she doesn't have to wear bloody scrubs while telling a mother that her child has died.

She has learned to make sure the families of her patients are sitting down when she tells them bad news. She also asks a chaplain to join her.

But when it comes to her own mental health and the mental health of her colleagues, Bonne says, the encounters take a toll. "Doctors are humans, too, and we can feel these things," she says. "We can't just bury that."

Some researchers are trying to understand how exposure to trauma cases affects those clinicians and how they can get the mental health care they may need.

"In medical school and nursing school, we're not taught well at all how to deal with the difficult and sad things that we see," says Kristen Choi, a nurse and trauma researcher at the University of California, Los Angeles. "We're really socialized to just shove it down, to not talk about it and to not be vulnerable."

Choi is leading a study about the mental health of clinicians involved in the care of victims of 12 different episodes of mass violence. The study includes interviews with doctors and nurses about how they cope with memories of those experiences.

The work is still in its early stages, but Choi is eager to analyze its results because it's an area that hasn't been studied much and that seems more important than ever.

Researchers call the psychological consequences of caring for trauma victims "secondary traumatic stress" or "vicarious trauma." Choi says it can appear to be like post-traumatic stress disorder: nightmares, intrusive memories, and what she calls "trauma distortion," or when normal events trigger thoughts of violence or abuse.

Because the research on secondary trauma is limited, Choi adds, it's hard to know what might be most helpful. One thing's for sure, Choi says: "It starts with a culture change in our work environment, making space for clinicians to express these things and be heard."

Team debriefing after difficult cases is one example, Choi says, of a workplace activity that might help doctors and nurses at risk of secondary traumatic stress. Expanding access to low-cost mental health care services, she adds, is also important. "There's only so much we can do in terms of self-care at an individual level," Choi says.

But those who work in the field say that many hospital emergency departments and local emergency medical services units haven't invested enough in protecting the psychological well-being of their employees.

"All of us who have been in EMS for any amount of time have a file folder or a drawer in our brain that stores these cases that we just can't ever forget," says Stephen Wood, a nurse practitioner and emergency medic for a Boston-area special weapons and tactics team. "Those are the cases that you're supposed to really feel no emotion about."

But if people who take care of trauma victims don't find effective ways to deal with what they see, Wood says, there can be unhealthy responses, like alcohol and drug abuse.

"A lot of people either drop out of the field, or you become somewhat cold and less empathetic than you should be," Wood says. "There is a lot of bravado associated with the field," he says, and it is filled with people who don't feel like they can express their emotions.

He has found help through an email list of first responders who share their experiences with each other. He worries, however, that many first responders suffering from secondary trauma may not know they need help.

Like Wood, other people on the front lines often tend to their own care as they can. Marissa Boeck, a trauma surgeon in training at the University of California, San Francisco, says much of what she does to stay mentally healthy falls to her time outside of work: exercise, meditation, time with family and friends.

Even so, she says, the consequences of violence that she sees weigh on her. "Once you touch someone, you feel responsible for how they do," she says. "You carry that with you a bit. I don't think there is anything that will ever erase that."

Bonne, the New Jersey trauma surgeon, says her department doesn't have a formal system for addressing the psychological effects on clinicians of treating so many victims of violence, but her colleagues are open to talking through difficult cases.

She has been actively speaking out on social media about her experiences with gun violence, and she says that kind of advocacy work also feels like a way of protecting herself against burnout and secondary trauma.

"There's all this talk about physician wellness, but nobody ever talks about mitigating the horrible things that we see as a means of creating more well physicians," Bonne says. "I can take a lot. I would probably be a more patient, more compassionate, and generally better physician if the only thing I ever had to do was take care of car accidents."