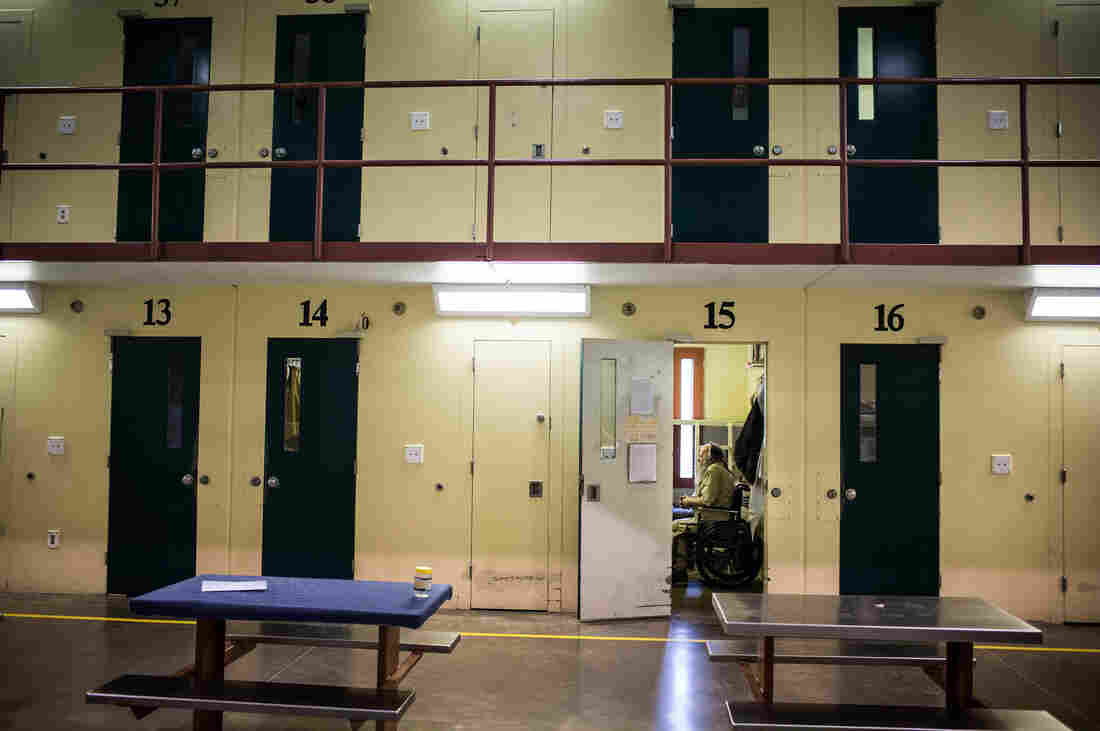 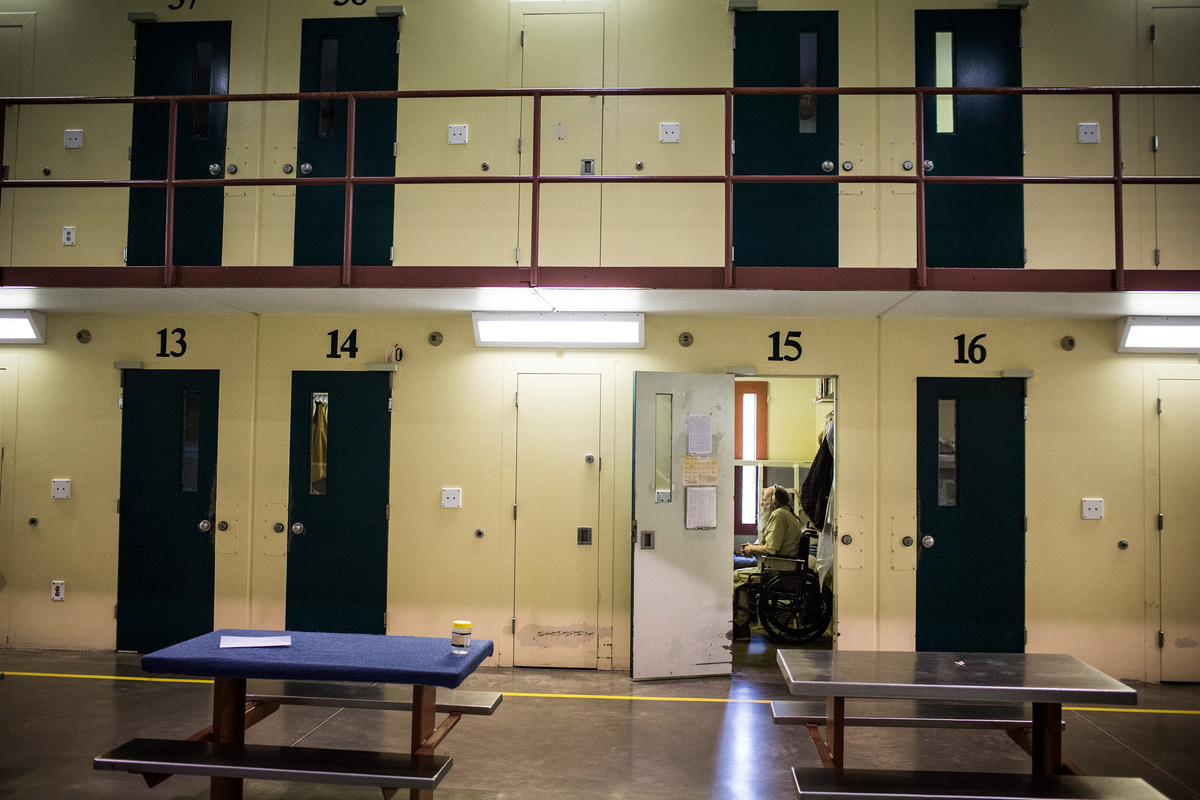 A view inside Rhode Island's John J. Moran Medium Security Prison, in Cranston. Rhode Island is the only state to screen every individual who comes into the correctional system for opioid use disorder, and to offer, in conjunction with with counseling, all three medically effective treatments.

In a windowless classroom at the John J. Moran medium-security prison in Cranston, R.I., three men sit around a table to share how and when they began using opioids.

For Josh, now 39, it was when he was just 13 years old. "I got grounded for a week in my house, so I grabbed a bundle of heroin and just sat inside and sniffed it all week."

"I started using heroin at 19," says Ray, now 23. "I was shooting it. It was with a group of friends that I was working with, doing roof work."

This group therapy session is part of a $2 million program the Rhode Island Department of Corrections launched in 2016. These men are all serving prison sentences for crimes driven by their drug addiction — including robbery, shoplifting and possession of controlled substances. NPR agreed to only use their first names so they could speak frankly about illegal behavior.

They are among the approximately 275 inmates and pretrial detainees getting medication-assisted treatment behind bars.

The program is central to Rhode Island Gov. Gina Raimondo's strategy to reduce opioid overdose deaths in the state. Today, Rhode Island remains the only state to screen every individual who comes into the correctional system for opioid use disorder, and to offer, along with drug counseling, all three types of drugs approved by the Food and Drug Administration to treat addiction — methadone, buprenorphine and naltrexone.

While prisons have long offered medication-assisted treatment to small subsets of inmates, such as pregnant women, many prisons in the U.S. do not offer it at all, despite the fact that it's considered by physicians to be the most effective treatment for opioid addiction.

The criminal justice reform bill currently before Congress would require the Federal Bureau of Prisons to assess its capacity to provide medication-assisted treatment to inmates who are dependent on opioids, and to draw up plans to expand access to medically aided treatment "where appropriate." But the bill leaves open who would determine when and where the medication is appropriate.

"It's just ludicrous that we have a whole population of people who are by and large incarcerated because of their disease, and we have an effective medication treatment for the disease and we don't give it to them," says Dr. Josiah Rich, director of the Center for Prisoner Health and Human Rights at the Miriam Hospital in Providence.

Rich was one of the experts tapped by Raimondo to identify where best to direct resources to bring down the state's overdose deaths. He made the case for a prison program, given the high death rate among people recently incarcerated.

"This is a population of the most severely impacted, the most advanced stages of opioid use disorder — the people who have taken the greatest risks and gotten caught up in the system," Rich says. While in prison, the inmates' opioid use usually ends, and so does their ability to tolerate high doses of the drugs without overdosing.

"Then you get released into a very stressful situation with a lot of triggers, and you typically relapse," Rich says. "And if you relapse back to the same level you were using, you're set up for overdose and death."

This is what drove the Rhode Island Department of Corrections to offer medication-assisted treatment not just to people coming into prison, but also to those who began serving their sentences before the program existed. Eight to 12 weeks before their release, inmates with histories of addiction are offered methadone, buprenorphine or naltrexone to ease their transition back to society, beginning with very low doses.

"Even if somebody has not used in many years, they may still have changes in their brain," says Dr. Jennifer Clarke, the Department of Corrections medical programs director. "The cravings are always going to be there. So, if somebody's going back to the same old neighborhood, chances are they're going to be exposed to the same people as when they were using drugs.

"So, providing the medication before someone gets out really helps to prevent a relapse," Clarke says.

The possibility of relapse is top of mind for the men in group therapy. They have friends who have overdosed and died after serving time.

Kevin has just a few weeks left in his sentence, one of many that he's served in his adult life. "It feels good, but I'm nervous. I always get nervous," he says. "As soon as I walk out the gates — my feet, when they hit the pavement outside of here, I have to get busy immediately."

"You worry about the drug aspect once you hit the street," says Josh who has also served multiple sentences for drug-related crimes. "Many times, I've gone out of here and overdosed repeatedly. Not on purpose, just accidentally, trying to hide from the pain, hide from myself."

This time, Josh says, the treatment program has given him a way to focus on a different way out.

"I still have to fight the other drugs," he says. "But at least I have something to help with one of the ones that's brought me closer to death than anything else."

The program inside the prison is run by CODAC, a behavioral healthcare organization that also runs substance abuse treatment programs outside the prison, with locations across Rhode Island. Prisoners who enter the program remain clients when they exit prison, with treatment outside typically paid for by Medicaid. Discharge planners from CODAC help the inmates get organized for that transition.

Early reports from the program are promising. In a study published in JAMA Psychiatry last spring, researchers found that overdose deaths among people who had recently been imprisoned dropped sharply in the first six months of 2017 as compared to the same period the year before — nine deaths, compared to 26.

Researchers continue to track outcomes and are interviewing inmates and correctional staff to learn more about how well the program is functioning.

There have been hurdles to overcome, says Lauranne Howard, substance abuse coordinator for the Department of Corrections, starting with resistance from security staff about the use of buprenorphine in the program. Buprenorphine itself is an opioid, though less potent than street drugs in many of its effects, and sometimes ends up sold or given to people outside its intended use.

"The reaction was, why are you going to bring in a medication that we're working real hard to keep out? And that's a legitimate concern," Howard says.

In response, the program has made some changes. CODAC's Leslie Barber, who directs the prison program and runs the group therapy sessions, says they launched the program using buprenorphine pills, which take awhile to dissolve.

A number of other states have taken notice and sent corrections officials to Rhode Island to learn from their experiences. Clarke points out that Rhode Island has the advantage of being a small state with a combined jail and prison system, so that everyone who is incarcerated comes to the same campus. When an inmate is transferred from jail to prison, there is no disruption in treatment.

In other states, it's more complicated. For example, Rikers Island in New York City offers medication-assisted treatment to all medically eligible inmates, but those who are sentenced to time in a state prison where treatment is not offered have to be tapered off methadone or buprenorphine before they leave Rikers Island.

Patricia Coyne-Fague, acting director of corrections for Rhode Island, recognizes that even with medication-assisted treatment, people will stumble and make mistakes — even end up reincarcerated. Still, she defends Rhode Island's $2 million annual expenditure with the argument that the program saves lives.

"Sometimes there can be a negative attitude about whose lives we are saving," she says. "But everybody belongs to somebody. And so, while they may have committed a crime and deserve to be incarcerated, they're still human beings. And if we can keep people from dying, that's a good thing."

An earlier version of this story included a quote that stated that Rikers Island does not start inmates on medication-assisted treatment if they are going to be transferred to a state prison. We've updated this story to reflect that since September 2017, New York City Health + Hospitals/Correctional Health Services has been offering treatment to all medically eligible patients, including those who will have to be tapered off methadone or buprenorphine before being transferred to a state prison.