Accessibility links
Under Trump, Number Of Uninsured Kids Rose For First Time This Decade : Shots - Health News Economic growth usually means more kids get health insurance, but that's not been the case during the Trump years, a study shows. For the first time in a decade, the uninsured rate for children is up.

Number Of U.S. Kids Who Don't Have Health Insurance Is On The Rise

Number Of U.S. Kids Who Don't Have Health Insurance Is On The Rise 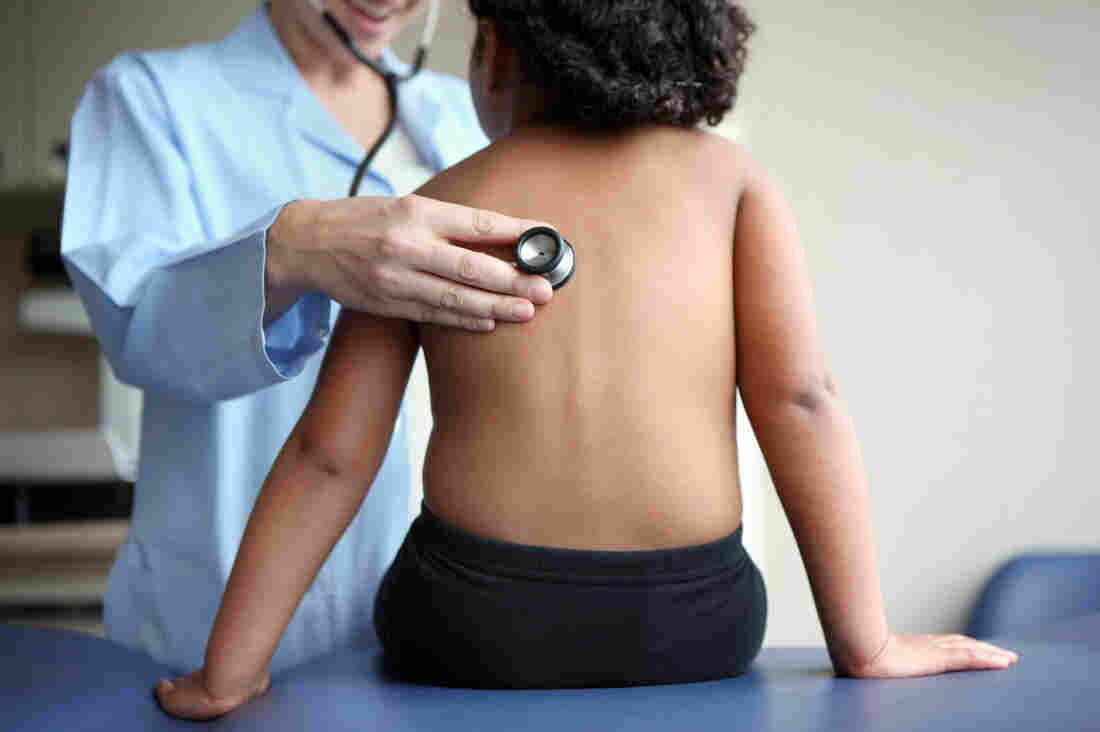 The number of children in the United States without health insurance jumped to 3.9 million in 2017 from about 3.6 million the year before, according to census data. Katrina Wittkamp/Getty Images hide caption 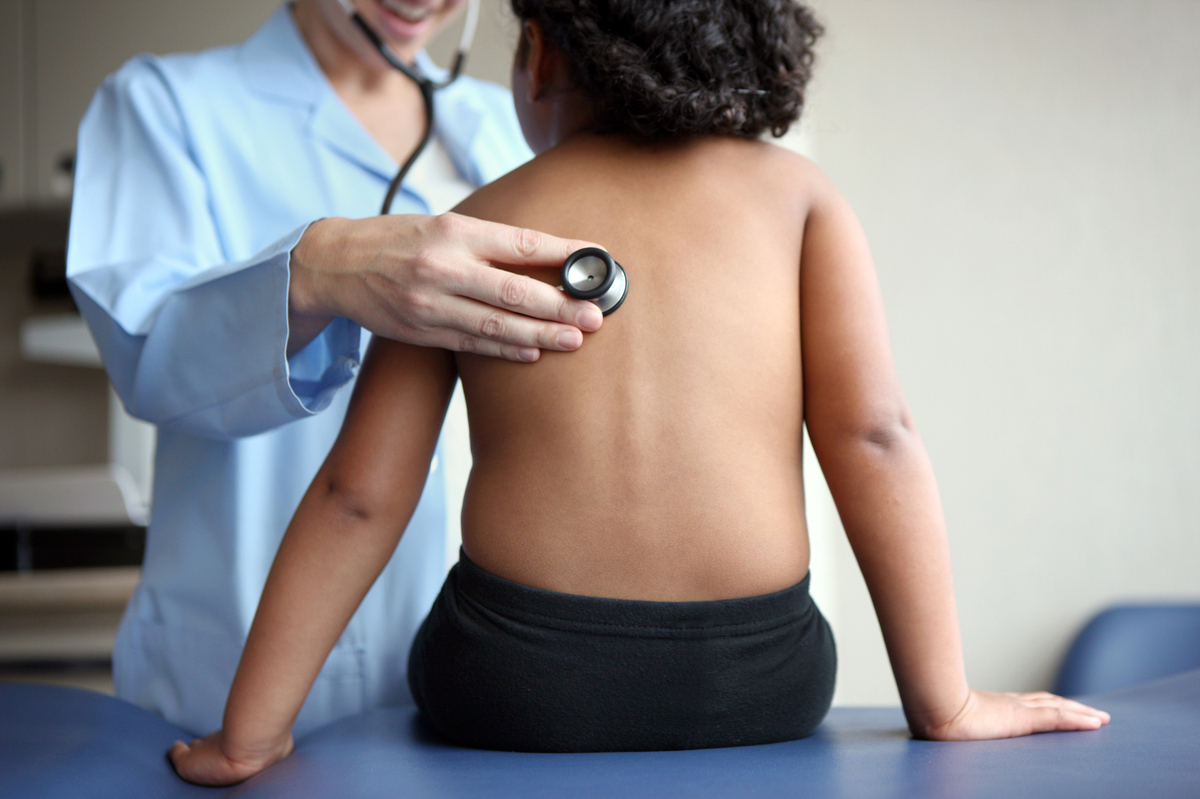 The number of children in the United States without health insurance jumped to 3.9 million in 2017 from about 3.6 million the year before, according to census data.

After years of steady decline, the number of U.S. children without health insurance rose by 276,000 in 2017, according to a Georgetown University report released Thursday.

While not a big jump statistically — the share of uninsured kids rose to 5 percent in 2017 from 4.7 percent a year earlier — it is still striking. The uninsured rate typically remains stable or drops during times of economic growth. In September, the U.S. unemployment rate hit its lowest level since 1969.

"The nation is going backwards on insuring kids and it is likely to get worse," says Joan Alker, co-author of the study and executive director of Georgetown's Center for Children and Families.

Alker and other advocates for children's health place the blame for this change on the Trump administration and the Republican-controlled Congress, saying the Republican policies and actions have cast a pall on enrollment in health plans.

The number of children in the United States without coverage rose to 3.9 million in 2017 from about 3.6 million a year earlier, according to census data analyzed by Alker's Georgetown team.

The overall uninsured rate for people of all ages — which plummeted from 2013 to 2016 following the health law's implementation — remained unchanged at 8.8 percent last year.

The share of children with employer-sponsored health coverage rose modestly in 2017, Alker says, but not by enough to make up for the drop in children enrolling in Medicaid or getting coverage from Obamacare insurance exchanges.

While no states made significant strides in reducing the percentage of children who are uninsured, nine states saw their numbers go the wrong way. The largest negative changes occurred in South Dakota (where the rate of uninsured kids rose from 4.7 percent to 6.2 percent), Utah (up from 6 percent to 7.3 percent) and Texas (from 9.8 percent to 10.7 percent).

More than 1 in 5 uninsured children nationwide live in Texas — about 835,000 kids — by far the highest number of any state.

Florida had 325,000 uninsured kids last year, as its uninsured rate for that age group rose 0.7 percentage points to 7.3 percent. California had 301,000 children without insurance — its number remained virtually unchanged, relative to the previous year.

Other states with significant increases were Georgia, South Carolina, Ohio, Tennessee and Massachusetts.

The uninsured rates for children increased at nearly triple the rates in states that did not expand Medicaid under the Affordable Care Act, according to the report. Studies have shown that children whose parents are insured are more likely to have health coverage.

Georgetown has been tracking these figures since 2008, when 7.6 million children — or about 10 percent of kids — lacked health coverage.

Because nearly all low-income children are eligible for Medicaid or the federal Children's Health Insurance Program, the challenge is making sure parents are aware of the programs, Alker says, and getting the kids enrolled and keeping them signed up as long as they are eligible.

Congress let the CHIP program funding lapse for several months in 2017, putting states in a position of having to warn families that enrollment would soon be frozen. Congress restored federal funding in early in 2018.

In addition, low-income families were bombarded by news reports last year that Congress was threatening to repeal the health law that expanded coverage to millions. And, in the past two years, the Trump administration has slashed funding for Obamacare navigators who help people sign up for coverage.

Alker points to the Trump administration's September proposal, known as the "public charge" rule as another factor that may have led to fewer children getting health insurance. The rule could make it harder for legal immigrants to get green cards if they have received certain kinds of public assistance — including Medicaid, food stamps and housing subsidies. Green cards allow these legal migrants to live and work permanently in the United States.

OLE Health, a large health provider based in Napa Valley, Calif., that serves many immigrants, says it has seen patients leave the Medicaid rolls in the past year. CEO Alicia Hardy says many have dropped coverage over fears the help could jeopardize their immigration status.

"They are afraid of being deported," she says.

All those events may have deterred families from getting their kids covered.

"The welcome mat has been pulled back," Alker says, "and as a result we see more uninsured children."

She says the easiest way to change the trend would be for more states to expand Medicaid under the health law. Fourteen states have yet to do so. Though the expansion largely affects adults, as parents enroll, their children are likely to follow.

Kaiser Health News, a nonprofit news service, is an editorially independent program of the Kaiser Family Foundation, and not affiliated with Kaiser Permanente. KHN's coverage of children's health care issues is supported in part by a grant from the Heising-Simons Foundation.