Accessibility links
To Treat Addiction In Rural America, Start With Hiring Specialists : Shots - Health News While opioids get all the attention, rural communities struggle with substances like meth and alcohol too. One clinic is building up capacity to treat all of them, using both medicine and counseling.

Listen · 4:01 4:01
For One Rural Community, Fighting Addiction Started With Recruiting The Right Doctor 4:01 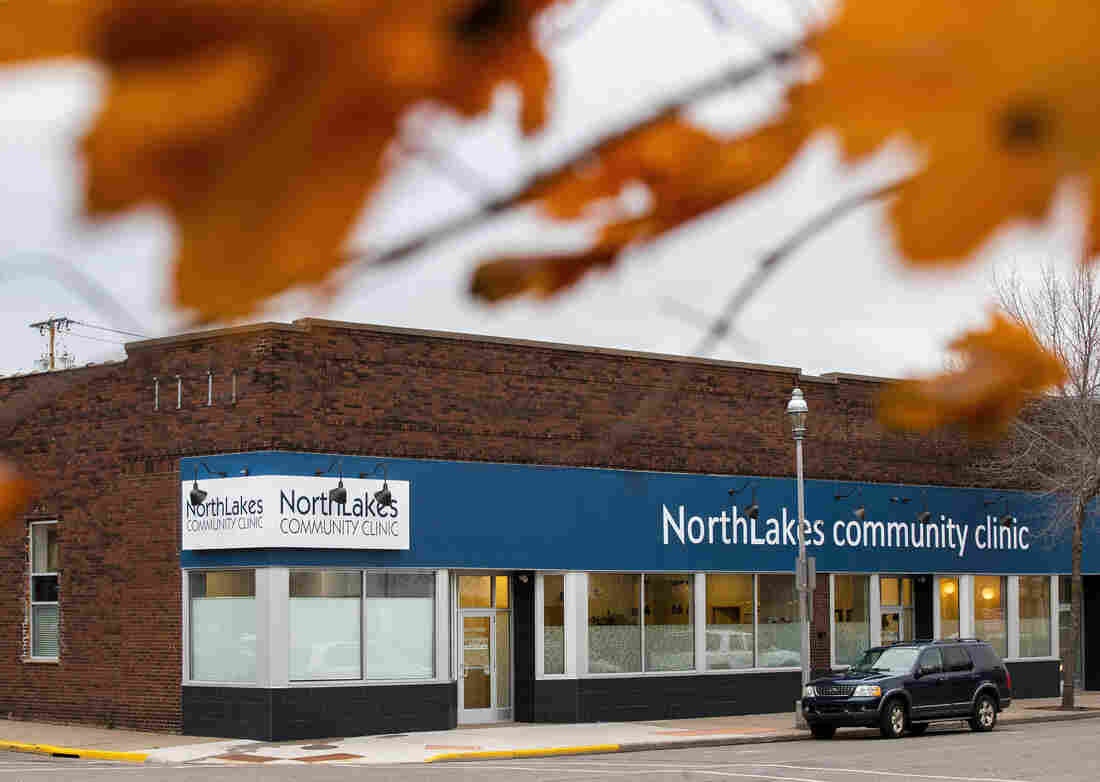 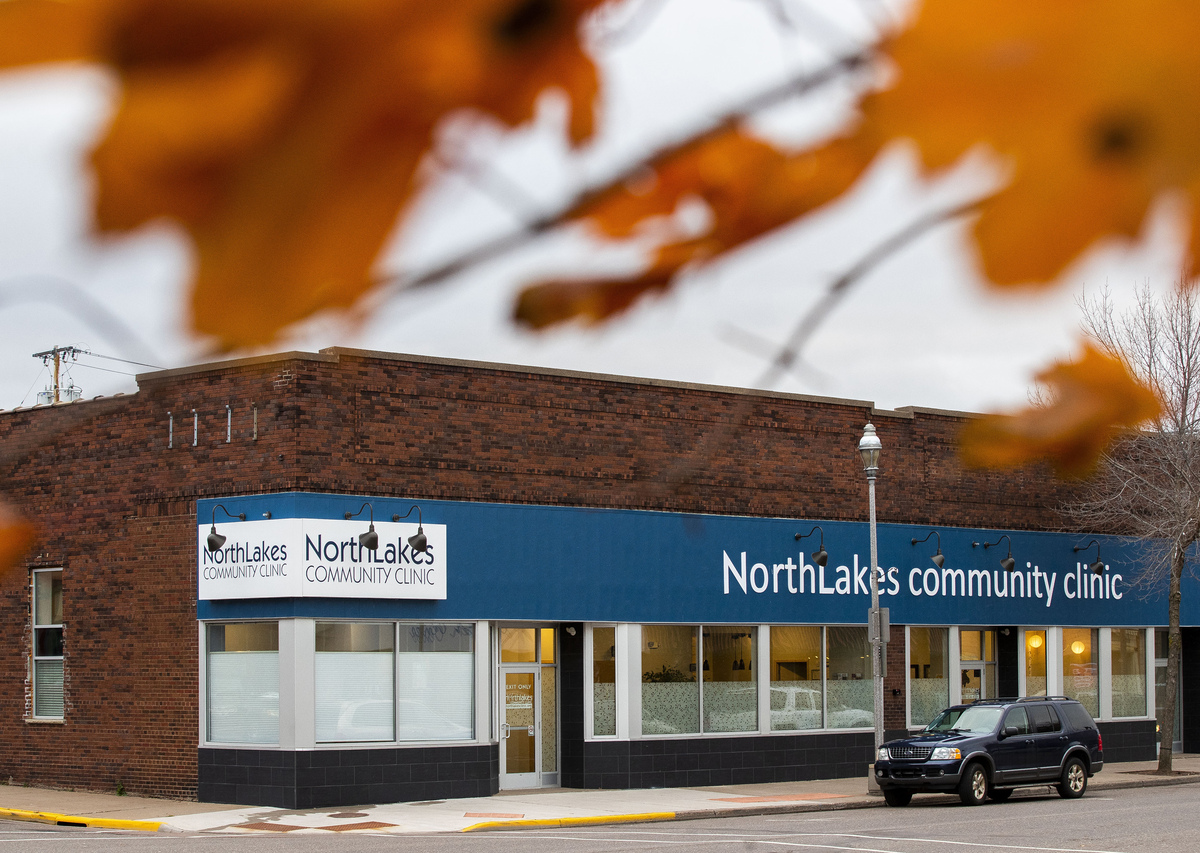 Lindsay Bunker woke up from a nightmare.

The 32-year-old lives with her sixth-month-old daughter on the Lac Courte Oreilles Indian Reservation in northern Wisconsin. She's struggled with addiction for over 10 years, mostly to heroin. Then came the nightmare: She dreamt two men were attacking her baby while she could think only about drugs.

"In my mind I was thinking, 'If I can just get one hit, if I can get one line, I can save her,'" she recalls, pausing before continuing, "I woke up and I was panicking. How can a mother think like that?"

It was a wake-up call. Bunker says she realized in that moment that heroin was "evil" and she resolved to get into treatment. In a lot of rural America, that's where the story could have ended.

Many rural communities lack basic resources for substance abuse. There are fewer services available than in urban areas—as many as 82 percent of rural Americans may live in counties that lack detoxification services, for example.

You can find the other stories in our series about life in rural America here.

But Bunker was lucky. She found a community health center only about an hour from her home that recently expanded its addiction treatment services.

The clinic, NorthLakes Community Clinic,serves Medicaid and Medicare patients, and offers sliding scale payments for those with low-income. It expanded its addiction recovery program with the help of state and federal grants targeting opioid use. Though rural communities across the country struggle with addiction, community health centers like this one are modeling an approach to managing — and funding — treatment programs.

"We were seeing substance use disorders killing our community and we felt it was our job to step up," says Reba Rice, the clinic's CEO. "We feel that all of our patients and community members deserve a life worth living."

Rice says addiction has torn apart rural communities in Northern Wisconsin in the last five years or so, with an increase in crime, problems in schools, trauma in families.

"It was amazing how many things we were seeing changed," she says. "The way people looked at each other, the level people were willing to trust each other, and it was all about the changes that this disease makes on its victims" 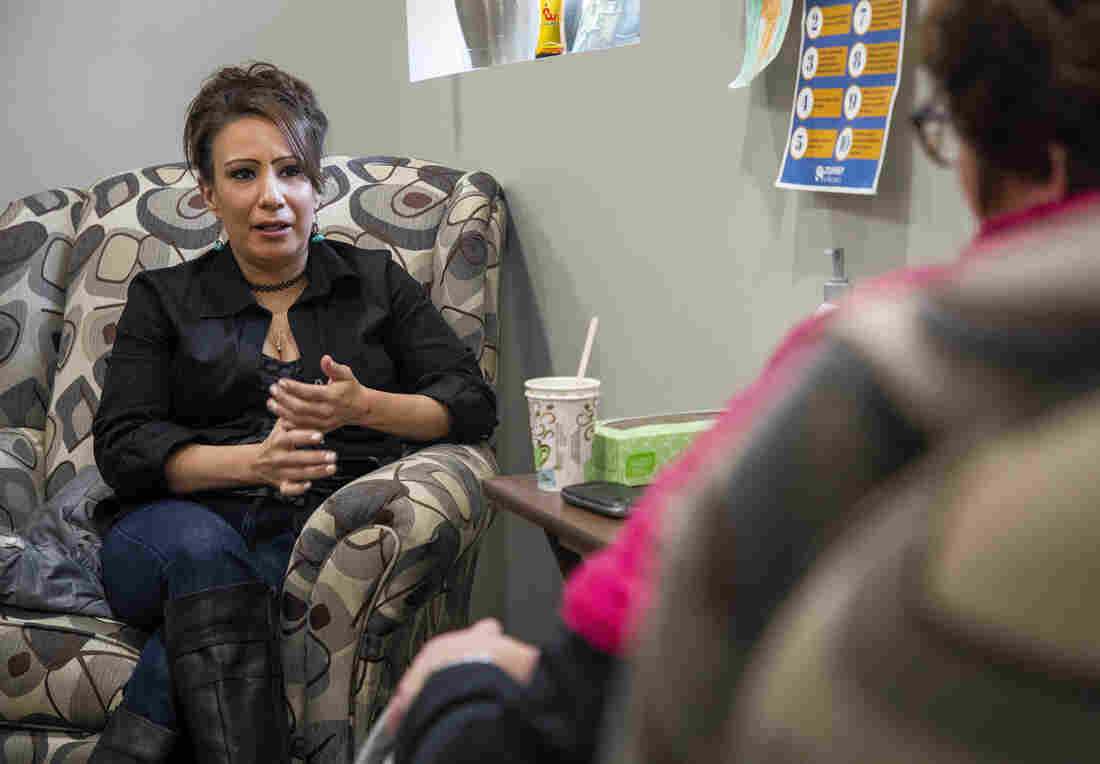 Lindsay Bunker (left) talks to her counselor Regina Fox (right) at the NorthLakes Community Clinic in Ashland, Wisconsin. Bunker is in treatment for heroin addiction. She says the clinic's approach is helping: "I love being here. I feel safe. I feel strong. I feel supported." Derek Montgomery for NPR hide caption 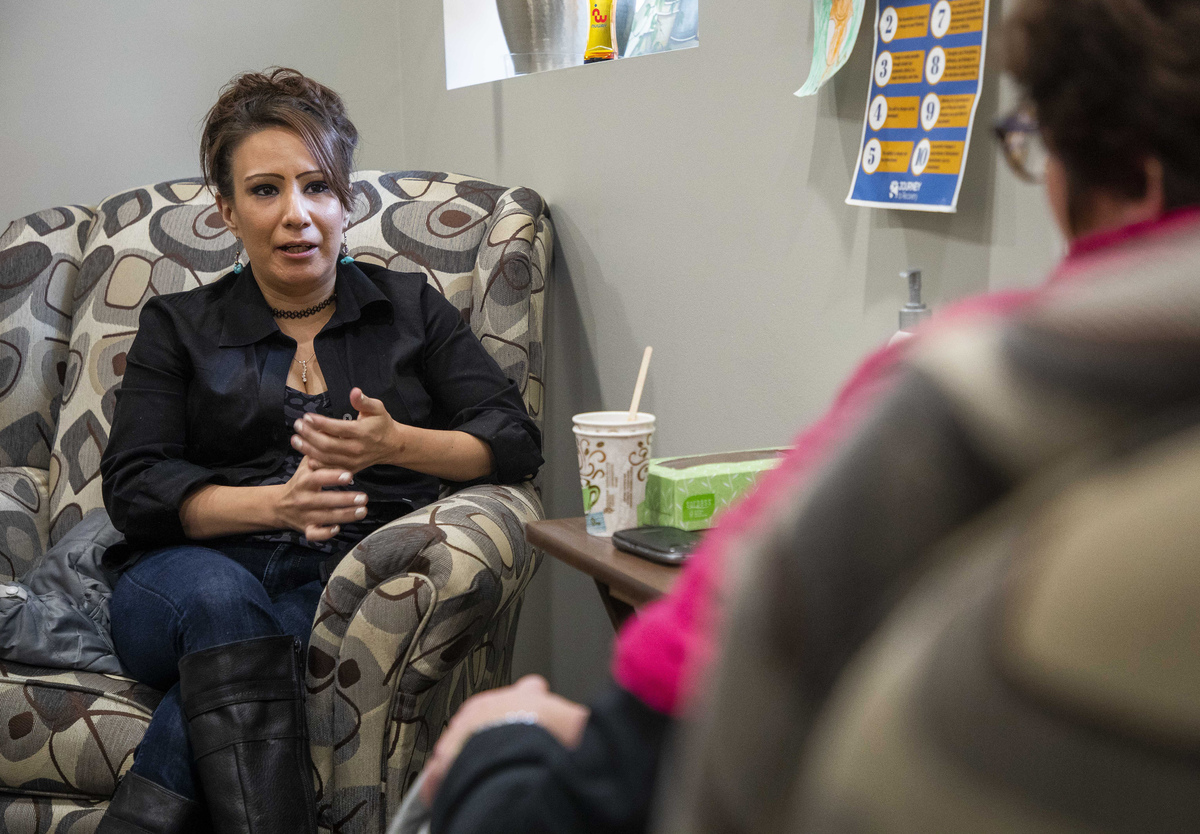 Lindsay Bunker (left) talks to her counselor Regina Fox (right) at the NorthLakes Community Clinic in Ashland, Wisconsin. Bunker is in treatment for heroin addiction. She says the clinic's approach is helping: "I love being here. I feel safe. I feel strong. I feel supported."

A recent poll by NPR, the Robert Wood Johnson Foundation and the Harvard T.H. Chan School of Public Health shows that opioid and other drug abuse is the top health concern for rural Americans.

NorthLakes has long provided primary care, dental and behavioral health services for low-income residents in Ashland, Wisconsin, and in several nearby towns. But as the opioid addiction problem worsened, Rice says she felt a responsibility as a health care provider to do something about it.

"We contributed to the problem so we needed to contribute to the solution," she says.Rice says opioids were just part of the puzzle: meth and alcohol were huge problems too. In fact, meth use in Wisconsin it has grown by 250 percent in recent years, according to the FBI. But new funds were becoming available for opioid treatment so the clinic applied for those — and is using them to build a comprehensive addiction treatment program that addresses all the substances people there struggle with.

To fund its expanded addiction treatment services, NorthLakes applied for and won a grant from the state of Wisconsin three years ago. It also got other federal grants intended for mental health and addiction. Central to their plan was hiring a physician who could lead the new program, and could prescribe the addiction treatment buprenorphine, known by the trade-name Suboxone.

Suboxone treatment is one of the most effective ways to treat opioid addiction. But it is hard to find in rural areas, because only providers who've received special training are allowed to prescribe it. One 2015 study found that more than 80 percent of rural counties in the U.S. do not have a single physician able to prescribe it.

NorthLakes found a physician who could prescribe it and more than that, who had a vision for a comprehensive addiction program.

Dr. Mark Lim says he is surprised he's here in this 8,000 person port-town on Lake Superior. He'd dreamed of living in a big city since he moved to the U.S. from the Philippines. When he got the call about the job, he was hesitant at first. "I didn't know where that was on a map," he recalls.

But he saw this part of Wisconsin, where the death rate from drug and alcohol abuse is nearly twice as high as the state average, as a place where he could make a difference.

Lim's been board certified in addiction medicine since it was officially recognized as a subspecialty in 2016, but he's been working in the field since about 10 years ago when he started working in an addiction practice in Maine. 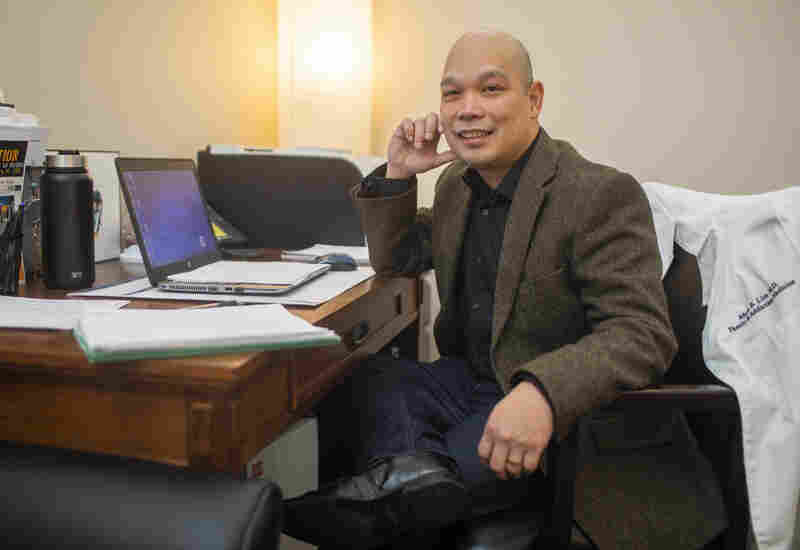 Dr. Mark Lim moved from Maine to become the recovery program medical director at NorthLakes Community Clinic in Ashland, Wisconsin. He wanted to set up a comprehensive practice to treat a range of addictions. Derek Montgomery for NPR hide caption 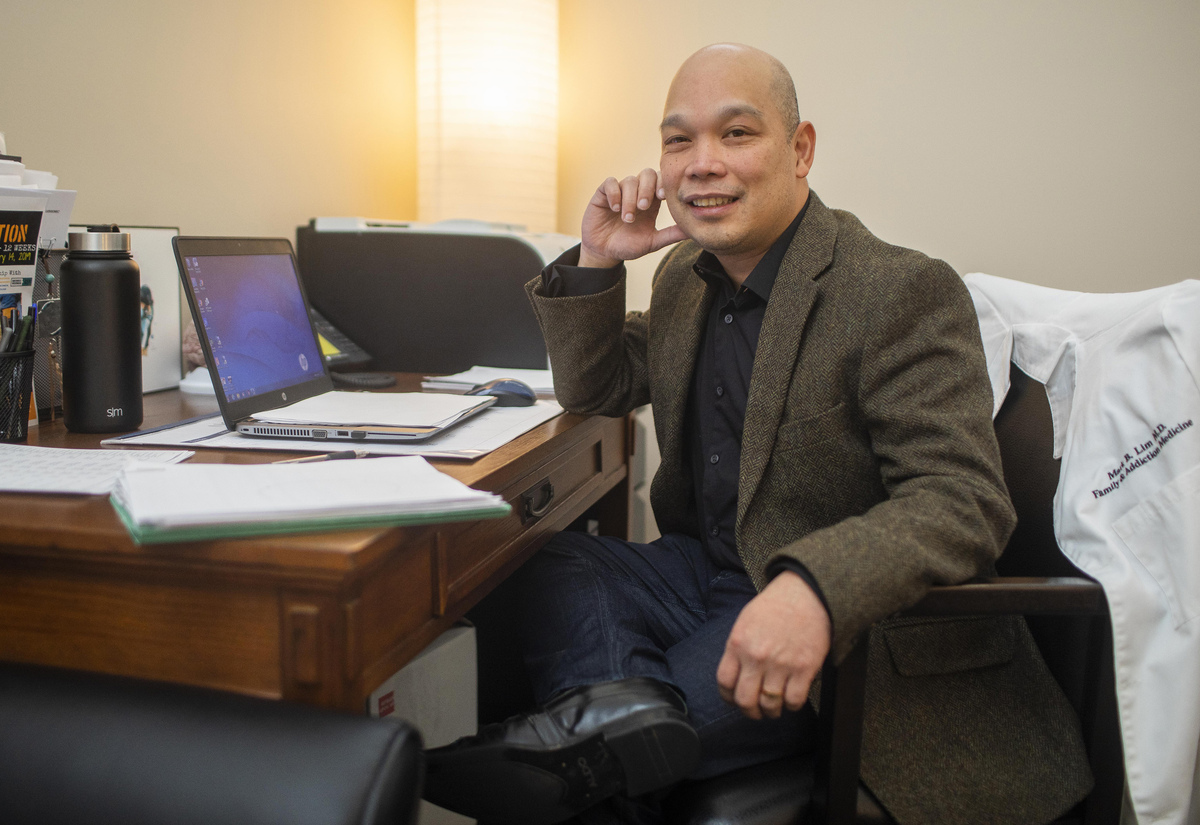 Dr. Mark Lim moved from Maine to become the recovery program medical director at NorthLakes Community Clinic in Ashland, Wisconsin. He wanted to set up a comprehensive practice to treat a range of addictions.

He took the Wisconsin job, with one stipulation: He would start a program to address addiction as a whole. His expertise would be just one part of the treatment approach.

"If I'm just going to be the Suboxone doctor I'm not doing the full practice of addiction," Lim says.

Because while the medication can be effective for treating opioid use disorder, Lim says addiction is not just about opioids.

Rice says she and Lim developed the program together with community partners including educators, law enforcement and tribal leadership. "We were successful because we had a vision for creating a program and so did he," Rice says.

While it's rare to have a doctor who can prescribe Suboxone in a rural area like this one, Lim says only about 40 of his more than 200 patients take it. For the rest, his program relies on a combination of counseling, group therapy for addiction and underlying mental health issues, and case management. Staff help to remove barriers to being successful in recovery, helping patients with things like, transportation to the clinic, daycare for parents during therapy, and even job placements.

And while most of the attention and dollars are focused on opioid abuse right now, he says rural communities struggling to address addiction can use those resources to build a larger treatment capacity.

"They can use [those resources] to say, 'Wait a minute, let's build a treatment capacity for other people,' " Gale says. "And they begin to create a community where you can treat all sorts of substance use disorders."

Lindsay Bunker gets a ride to and from the NorthLakes clinic from a medical transportation company — it's about an hour's drive each way from the reservation. The clinic has a baby sitter who looks after her daughter when Bunker is in appointments. She makes the trip nearly every day.

"I love being here. I feel safe. I feel strong. I feel supported," Bunker says.

But she only sees Dr. Lim about once a week. Instead, like all of the patients here, she spends most of her time in one-on-one and group counseling sessions. There's the early relapse prevention group (from which Bunker recently graduated), then there's the relapse recovery group, the family group, the engaged-in-recovery group. There'll be a trauma group soon as well.

Bunker says those group sessions are really important in helping her stay in recovery.

"I get cravings and the cravings are being taken away with that medicine [suboxone]. But being here with my peers, I love it. I really do," Bunker says.

And she says, recovery agrees with her.

Bram Sable-Smith (@besables) is a health reporter based in Madison, Wis.