Accessibility links
Life Insurance Application Denied Because Nurse Applicant Carries Naloxone : Shots - Health News The U.S. surgeon general has called on "bystanders" to be equipped with the opioid reversal drug to save lives. But when a nurse answered that call, her application for life insurance was denied. Why? 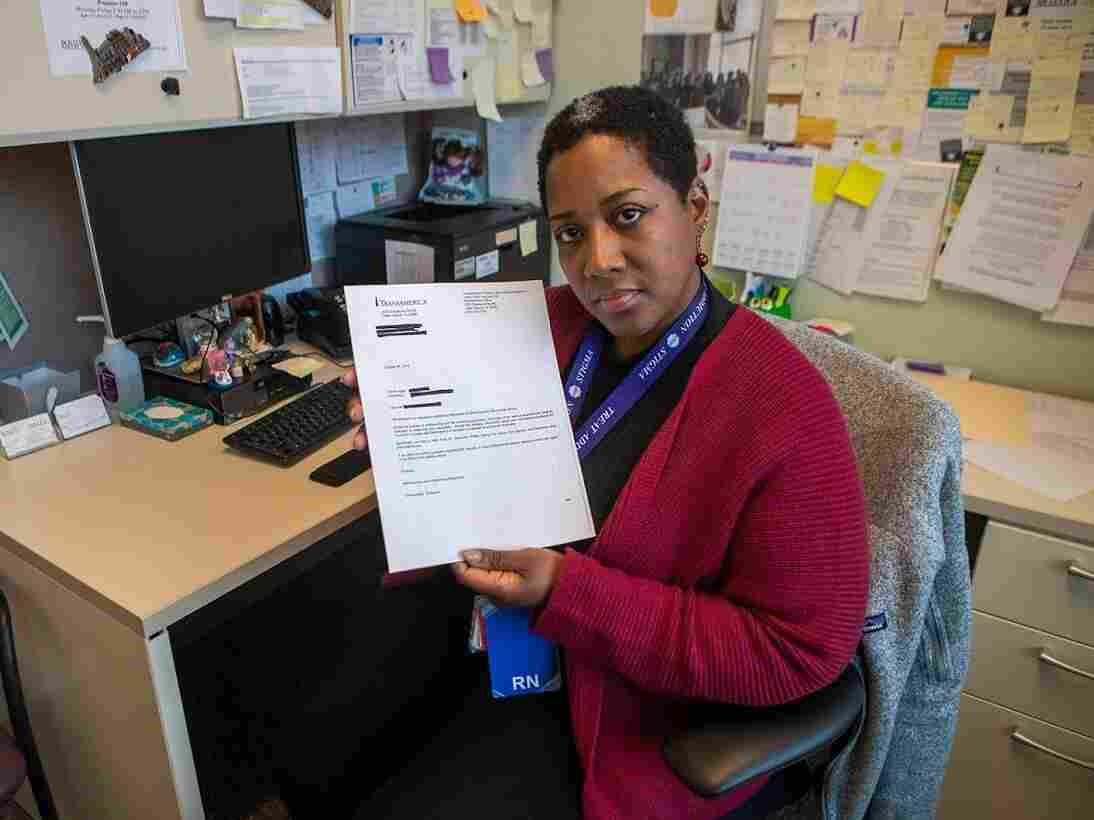 Isela was denied life insurance because her medication list showed a prescription for the opioid-reversal drug naloxone. The Boston Medical Center nurse says she wants to have the drug on hand so she can save others. Jesse Costa/WBUR hide caption 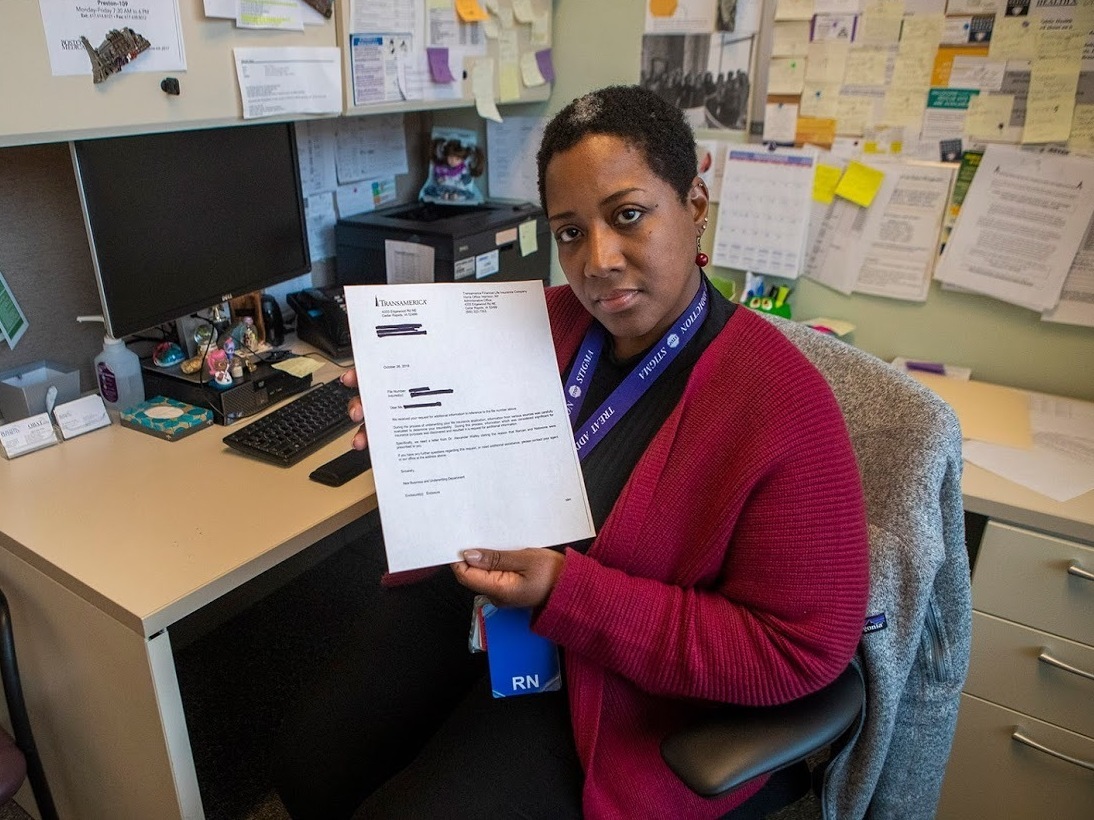 Isela was denied life insurance because her medication list showed a prescription for the opioid-reversal drug naloxone. The Boston Medical Center nurse says she wants to have the drug on hand so she can save others.

Bloodwork was supposed to be the last step in Isela's application for life insurance. But when she arrived at the lab, her appointment had been canceled.

"That was my first warning," Isela says. She contacted her insurance agent and was told her application was denied because something on her medication list indicated that Isela uses drugs. Isela, a registered nurse who works in an addiction treatment program at Boston Medical Center, scanned her med list. It showed a prescription for the opioid-reversal drug naloxone — brand name Narcan.

"But I'm a nurse, I use it to help people," Isela remembers telling her agent. "If there is an overdose, I could save their life."

That's a message public health leaders aim to spread far and wide. "BE PREPARED. GET NALOXONE. SAVE A LIFE," was the message at the top of a summary advisory from the U.S. surgeon general in April.

"My biggest concern is that people will be discouraged by this from going to get a naloxone rescue kit at the pharmacy."

Primerica is the insurer Isela says turned her down. (NPR has agreed to use just Isela's first name because she is worried about how this story might affect her ongoing ability to get life insurance.) The company says it can't discuss individual cases. But in a prepared statement, Primerica notes that naloxone has become increasingly available over the counter.

"Now, if a life insurance applicant has a prescription for naloxone, we request more information about its intended use as part of our underwriting process," says Keith Hancock, the vice president for corporate communications. "Primerica is supportive of efforts to help turn the tide on the national opioid epidemic."

After Primerica turned her down, Isela applied to a second life insurer and was again denied coverage. But the second company told her it might reconsider if she obtained a letter from her doctor explaining why she needs naloxone. So, Isela did contact her primary care physician — and then realized that her doctor had not prescribed the drug.

Isela had bought naloxone at a pharmacy. To help reduce overdose deaths, Massachusetts and many other states have established a standing order for naloxone — one prescription that works for everybody. Isela couldn't just give her insurer that statewide prescription; she had to find the doctor who signed it. As it happens, that physician — Dr. Alex Walley — also works at Boston Medical Center.

Walley is an associate professor of medicine at Boston University; he also works in addiction medicine at Boston Medical Center and is the medical director for the Opioid Overdose Prevention Pilot Program at the Massachusetts Department of Public Health.

"We want naloxone to be available to a wide group of people — people who have an opioid use disorder themselves, but also [those in] their social networks and other people in a position to rescue them," Walley says.

He says he's written a half dozen letters for other BMC employees denied life or disability insurance because of naloxone, and that troubles him.

"My biggest concern is that people will be discouraged by this from going to get a naloxone rescue kit at the pharmacy," Walley says. "So this has been frustrating."

The life insurance hassle — and threat of being turned to down -- has discouraged Isela and some of her fellow nurses. She is not carrying a naloxone kit outside the hospital right now because she doesn't want it to show up on her active medication list until the life insurance problem is sorted out.

"So if something were to happen on the street, I don't have one — just because I didn't want another conflict," Isela said.

BMC has alerted the state's Division of Insurance, which has said in a written response that it is reviewing the cases and drafting guidelines for "the reasonable use of drug history information in determining whether to issue a life insurance policy."

But Isela isn't a drug user. And yet, she is being penalized as if she were.

Michael Botticelli, who runs the Grayken Center for Addiction Medicine at BMC, says friends and family members of patients with an addiction must be able to carry naloxone without fear that doing so will send them to the insurance reject pile.

Poll: Most Americans Know About Opioid Antidote And Are Willing To Use It

"It's incumbent on all of us to make sure that we try to kind of nip this in the bud," he says, "before it is any more wide-scale."

Botticelli says increased access to naloxone across Massachusetts is one of the main reasons overdose deaths are down in the state. The most recent state report shows 20 fewer fatalities this year compared to last.

Botticelli relayed his concerns in a letter to Dr. Jerome Adams, the U.S. surgeon general, who says he contacted the National Association of Insurance Commissioners. That group says it has not heard of any cases of life insurance applicants being denied because they purchased naloxone.

Adams says it's good to, as Botticelli suggests, nip the problem in the bud.

"Naloxone saves lives," Adams says, "and it is important that all Americans know about the vital role bystanders can play in preventing opioid overdose deaths when equipped with this lifesaving medication."

Isela says the second company that rejected her has agreed to let her reapply, in light of Walley's letter stating that she carries the drug so that she can reverse an overdose. Isela is in the process of reapplying.