Accessibility links
Pennsylvania Holds Naloxone Giveaway : Shots - Health News Across the state, volunteers in Pennsylvania distributed naloxone on Thursday. The drug reverses the effects of opioid overdose. The giveaway was part of a state plan to combat the opioid epidemic.

In Pennsylvania, People Lined Up For Free Naloxone

In Pennsylvania, People Lined Up For Free Naloxone 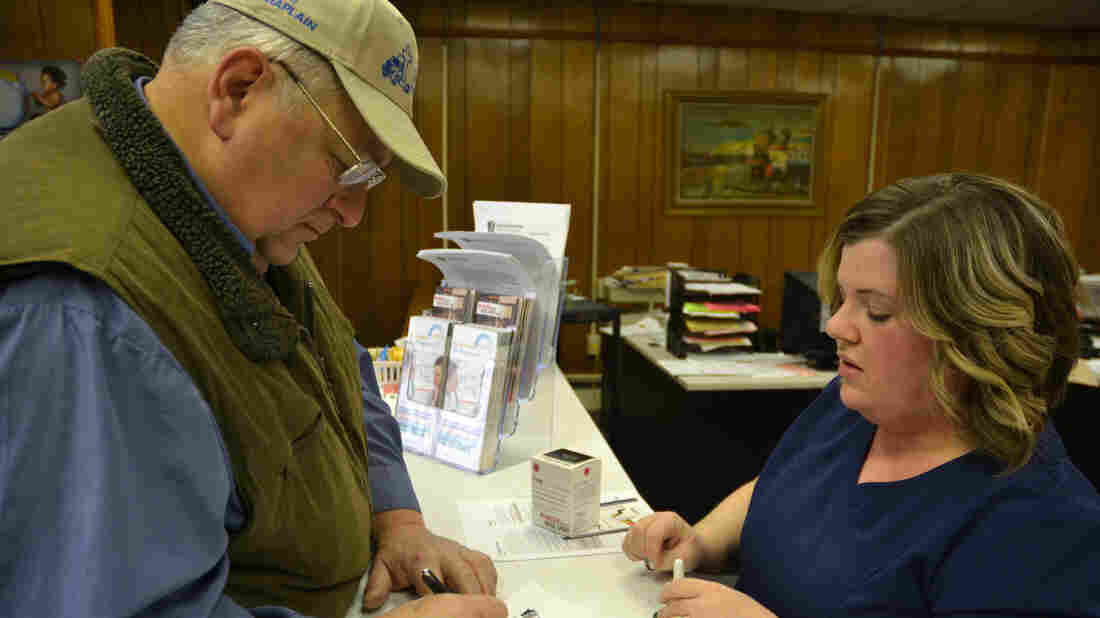 David Braithwaite signs a document to get free naloxone from Hayley Eager on Thursday, when Pennsylvania gave away naloxone at almost 80 places across the state. Brett Sholtis/WITF hide caption 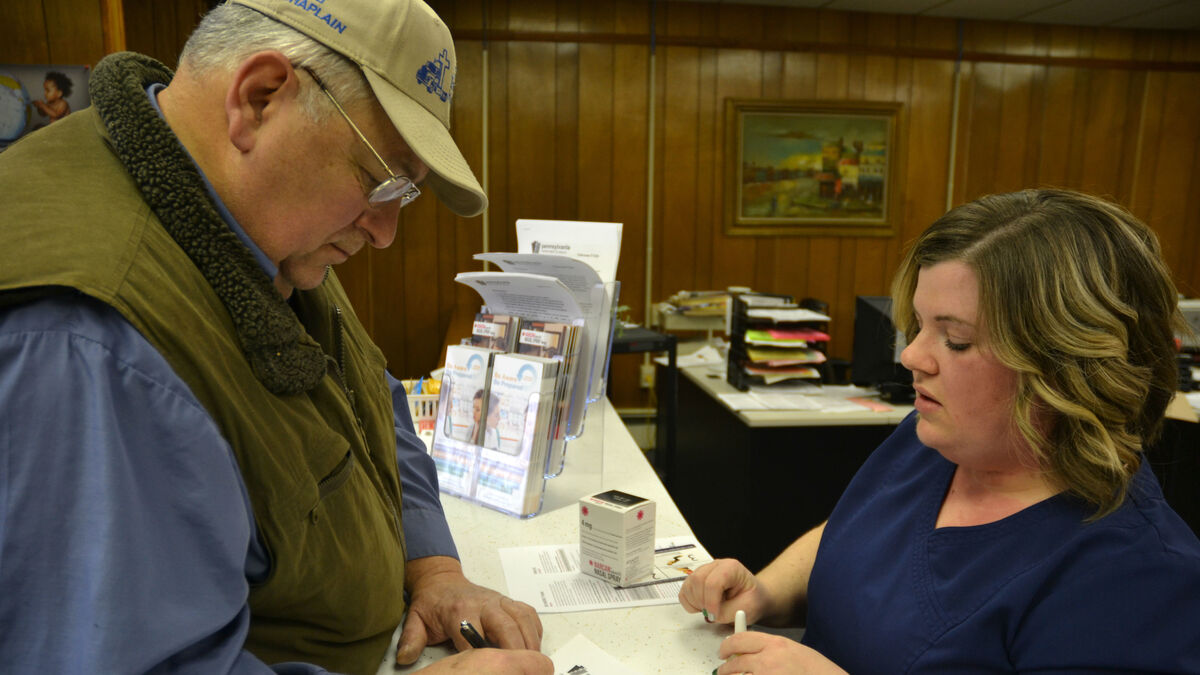 David Braithwaite signs a document to get free naloxone from Hayley Eager on Thursday, when Pennsylvania gave away naloxone at almost 80 places across the state.

David Braithwaite was standing next to his pickup truck Thursday in a parking lot outside the Cumberland County health center in Carlisle, Pa.

He's a chaplain for Carlisle Truck Stop Ministry. His hat even says it.

Braithwaite said he and another chaplain minister to truck drivers, homeless people and anyone else who needs help at the truck stop seven days a week.

Braithwaite was one of a half-dozen people who got to the health center before it opened. On Thursday, the state gave away the opioid reversal drug naloxone at nearly 80 places across Pennsylvania.

The state made the medication available to anyone free of charge — no questions asked. It is part of Democratic Gov. Tom Wolf's effort to address the opioid crisis.

Pennsylvania Is Giving Out Free Naloxone To Combat Drug Overdoses

Pennsylvania Is Giving Out Free Naloxone To Combat Drug Overdoses

Pennsylvania has allocated $5 million to the two-year opioid distribution program, part of a multidepartmental effort to curb opioid addiction in a state that lost over 5,400 people to overdoses in 2017.

The 66-year-old retired postal service employee was friendly and talkative, but his cheerful demeanor changed when he started talking about drug addiction. "We have had a number of individuals who have passed away from overdose," he said. "Young people. It is so frustrating and so heart-wrenching."

Braithwaite, a self-described conservative pragmatist, said he has mixed feelings about handing out naloxone to revive people who have had a drug overdose. He worries that without requirements for follow-up care, people who aren't ready to begin recovery will go right back to using heroin.

However, he knows of at least one person at the truck stop who was revived by naloxone. And he said he wants to be ready to save someone's life if he has to.

By the time he got to the front of the line, at least a dozen people were behind him, some streaming out the health center door.

Some in line knew firsthand how hard it is to beat opioid addiction. 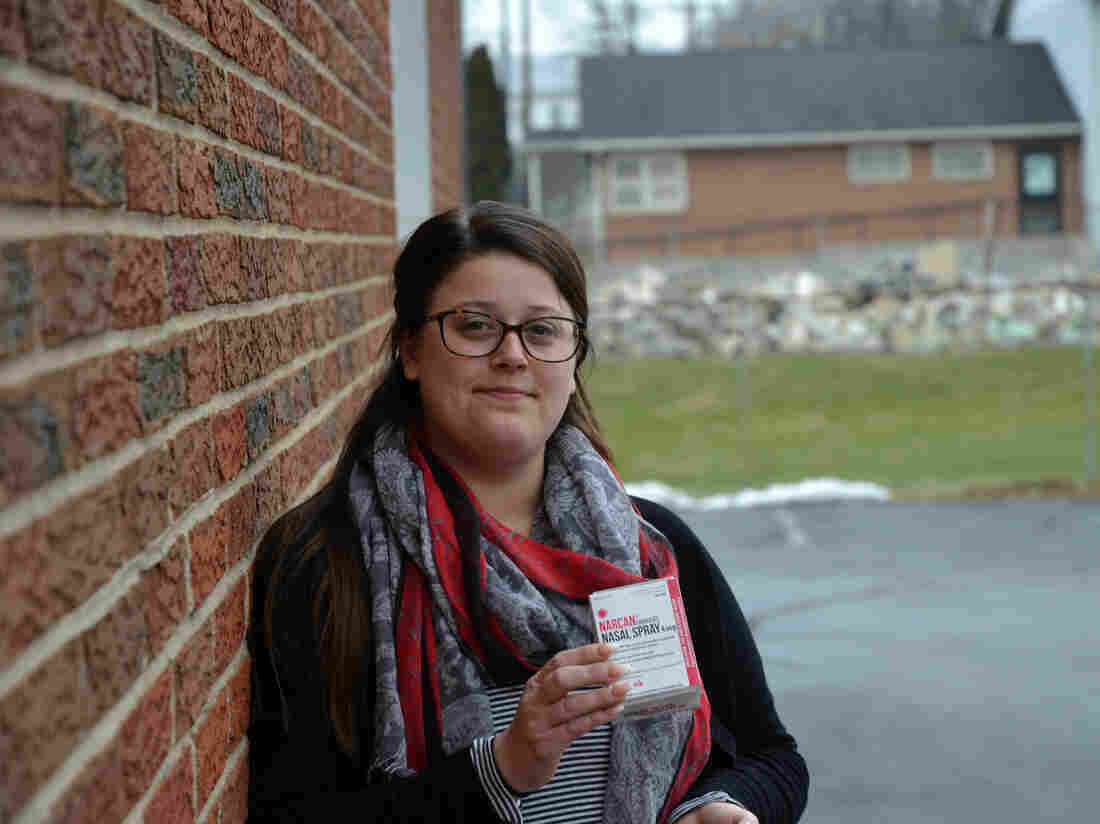 "People have to be alive to get the help that they need," said Brittney Webster, who got free naloxone at a health center in Carlisle, Pa. Brett Sholtis/WITF hide caption 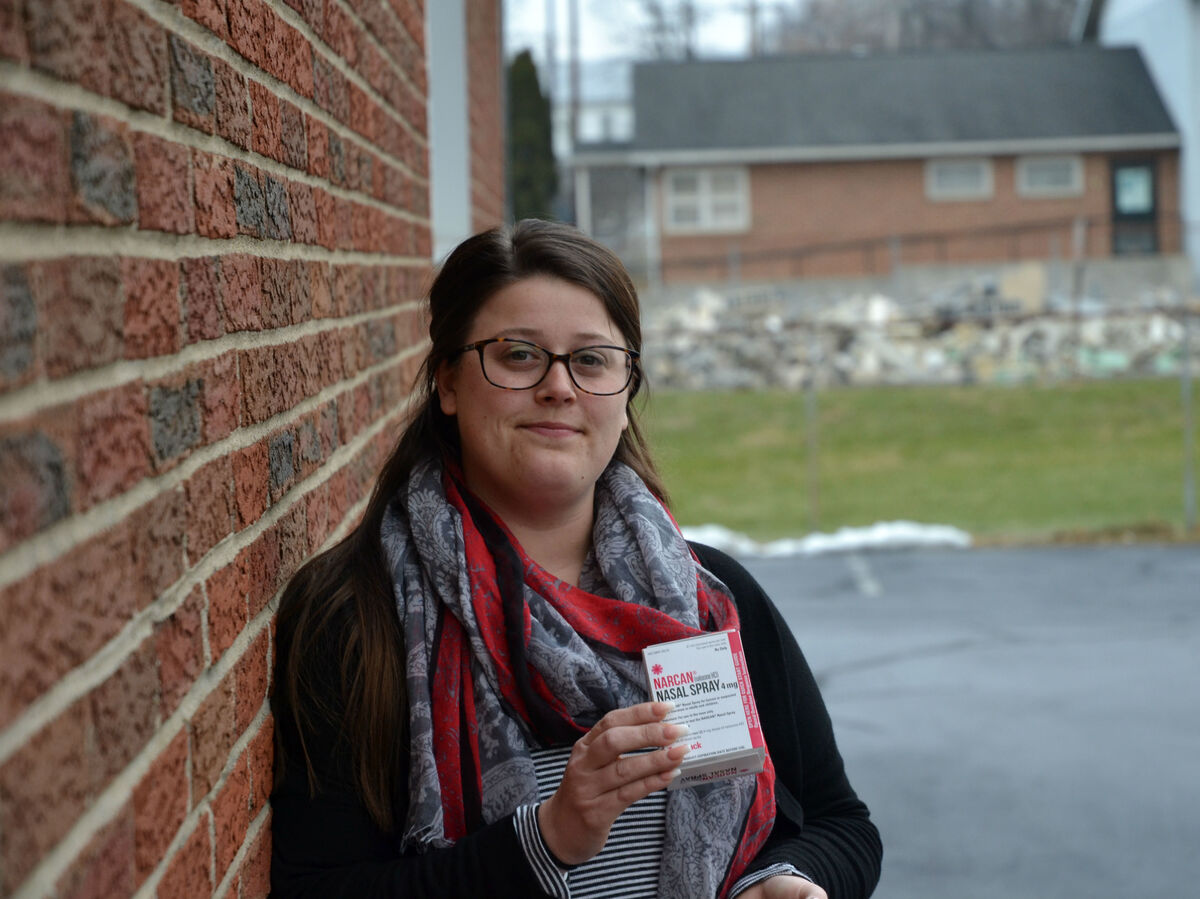 "People have to be alive to get the help that they need," said Brittney Webster, who got free naloxone at a health center in Carlisle, Pa.

Brittney Webster, 28, has been in recovery for six years. She spent 30 days at inpatient rehab and has attended 12-step meetings ever since. Now she works as a residential coordinator at the RASE Project, a nonprofit inspired by mental health advocacy groups that aims to help people who are recovering from addictions.

Webster said she plans to give naloxone to people in the recovery community who she meets through the RASE Project.

When asked about why she showed up, she started to tear up, thinking of the people she knew who have died from drug overdoses. It's been an emotional day, she said.

Scrolling the comments section of Facebook didn't help. She said too many people don't understand how addiction works, or how important naloxone is for saving lives.

"People have to be alive to get the help that they need," she says. "So, that's what this is. It gives people a chance to choose recovery again."

By 3 p.m., the state had distributed nearly 4,500 kits of naloxone, according to a news release. At least 42 locations had run out of naloxone.

Pennsylvania Department of Health Secretary Rachel Levine noted that the state's standing order for naloxone means people are also able to pharmacies to get naloxone — no prescription needed, but they would have to pay or use their health insurance.

This story is part of a reporting partnership with NPR, WITF's Transforming Health and Kaiser Health News.