Accessibility links
Nuclear Testing's Lasting Legacy For Oklahomans From The Marshall Islands : Shots - Health News Their former homeland was a U.S. testing site for nuclear bombs, but they can't get Medicare or Medicaid in Oklahoma. A resident of Enid, Okla., who was born in the islands is trying to change that. 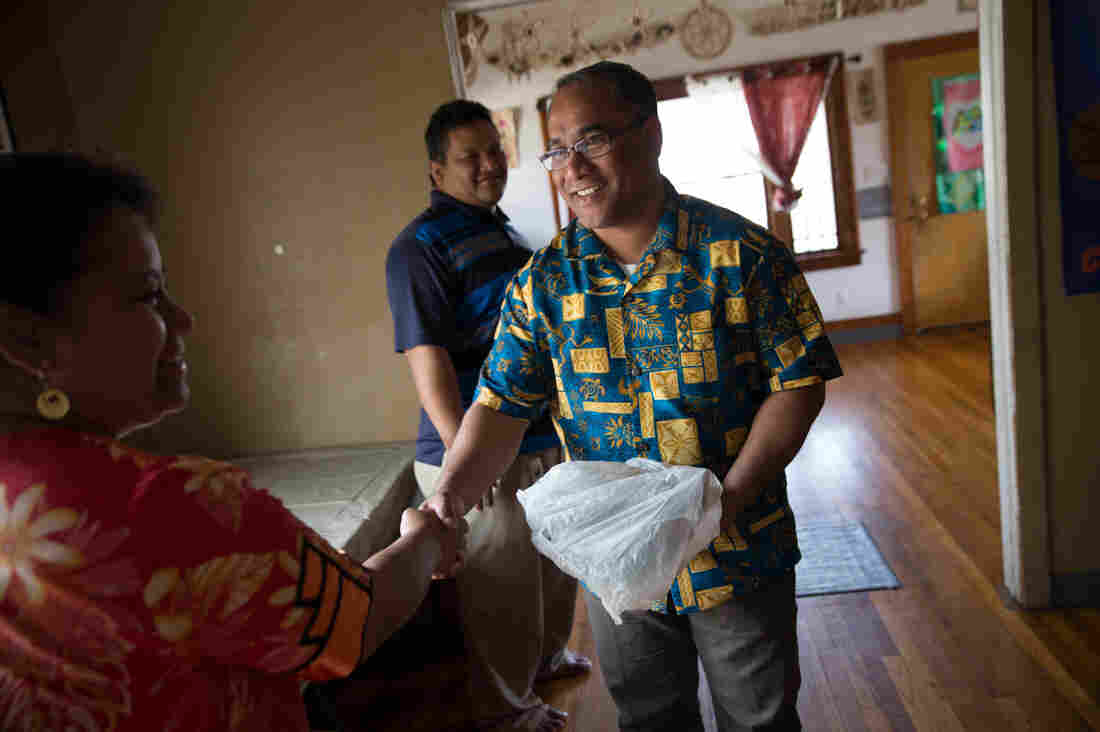 Terry Mote (right) visits the home of Stanley and Lorit Jamor in Enid, Okla. Stanley was born on Bikini atoll, and is a descendant of Chief Juda, who was told in 1946 by Commodore Ben H. Wyatt, of the U.S. Navy, to give up the island homeland "for the good of all mankind." Bikini was a main site for U.S. nuclear testing and is uninhabitable to this day because of radioactive contamination. Sarah Craig for NPR hide caption 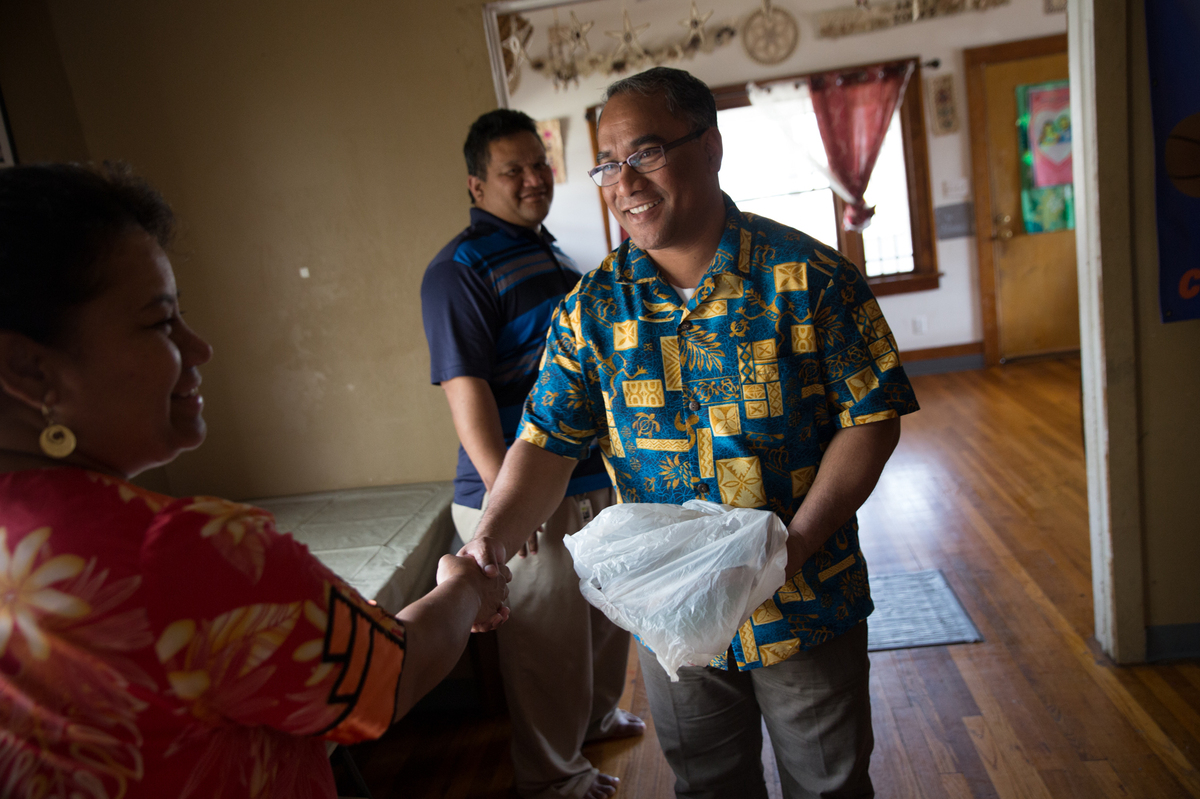 Terry Mote (right) visits the home of Stanley and Lorit Jamor in Enid, Okla. Stanley was born on Bikini atoll, and is a descendant of Chief Juda, who was told in 1946 by Commodore Ben H. Wyatt, of the U.S. Navy, to give up the island homeland "for the good of all mankind." Bikini was a main site for U.S. nuclear testing and is uninhabitable to this day because of radioactive contamination.

The prairie town of Enid, Okla. — population 50,122 — is best known as the state's "wheat capital." Enid is also home to a community of around 2,000 people who were born in the Marshall Islands. Most are low-income and struggling to get health care.

After World War II and until the 1980s, their homeland in the Central Pacific was a U.S.-administered territory, and for a part of that time, Americans used some islands in the region as a bombing range for testing nuclear weapons. Partly because of that history, a treaty now allows Marshallese to live and work in the U.S, as "indefinite legal residents."

But in Oklahoma, as noncitizens, the Marshallese aren't eligible for many state and federal health services. And that's a big problem says 42-year-old Terry Mote, who was born on the islands, but moved to Enid in 2007. 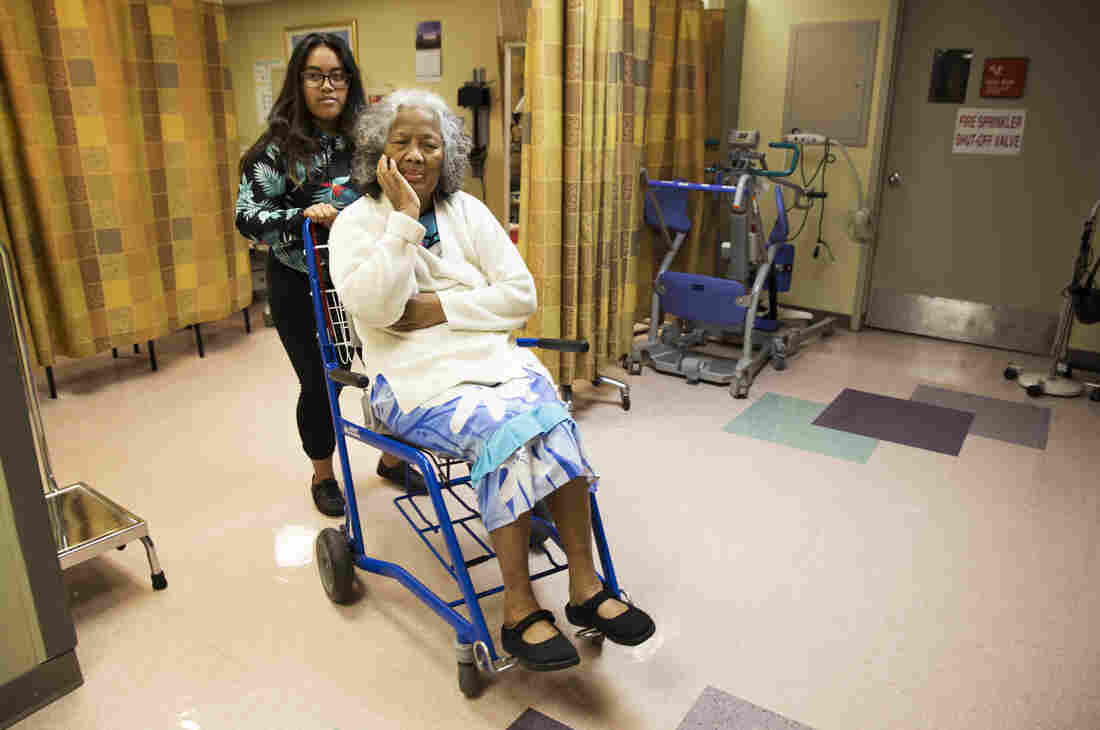 Daina Judah, 18, wheels her grandmother, Daina Joseia, out of an exam room at St. Mary's Hospital in Enid, Okla. Joseia checks in at the clinic weekly, so a health care provider can tend to a chronic sore on her back that's a medical complication of her diabetes. Sarah Craig for NPR hide caption

"I just want my family to be treated like the rest of those who are eligible for Medicaid, says Mote, who works as a Micronesian health adviser at the Garfield County Health Department, and lives in Enid with his wife, Lynn, and their five kids. His mom, Mojina, lives with them, too.

"Why the government came to our island to do [testing of] 67 bombs," Mote says, "and then they are just going to let us die over this?"

Between 1946 and 1958, after relocating whole villages to other islands to clear the way for weapons testing, the U.S. detonated 67 nuclear weapons at sites across the Marshall Islands and other territories.

Enid resident Daina Joseia is in her 60s. She has a childhood memory of what she later was told was the test of the Castle Bravo thermonuclear device on March 1, 1954 — the biggest and most destructive nuclear bomb detonated by the U.S. — 1,000 times as powerful as the bomb dropped on Hiroshima.

Clouds of radioactive, pulverized coral dust drifted across the islands, coating homes and people. Joseia says that, in the aftermath of the test, she remembers seeing people whose bodies were covered in burns, and others with their hair falling out.

In the following years, some people from the affected islands developed thyroid problems and cancer. Babies were born deformed.

Joseia sees a direct connection between her diabetes and the nuclear tests — not because there's a link between nuclear radiation and diabetes, but because the bombs contaminated the Marshall Islanders' traditional foods, like coconuts, fish and breadfruit. When their traditional diet too dangerous to eat, she explains, the Marshallese started to consume processed, imported foods — like spam and white rice. 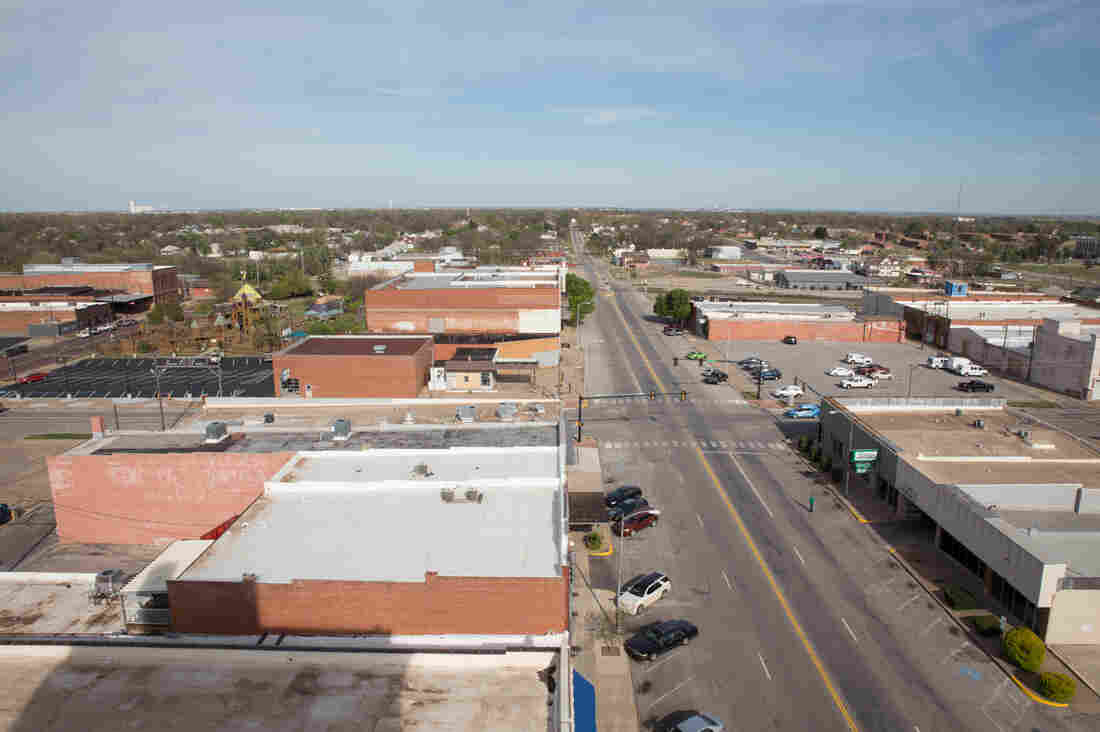 Enid has a population of 50,000 and may be best known as the "wheat capital" of Oklahoma. Sarah Craig for NPR hide caption 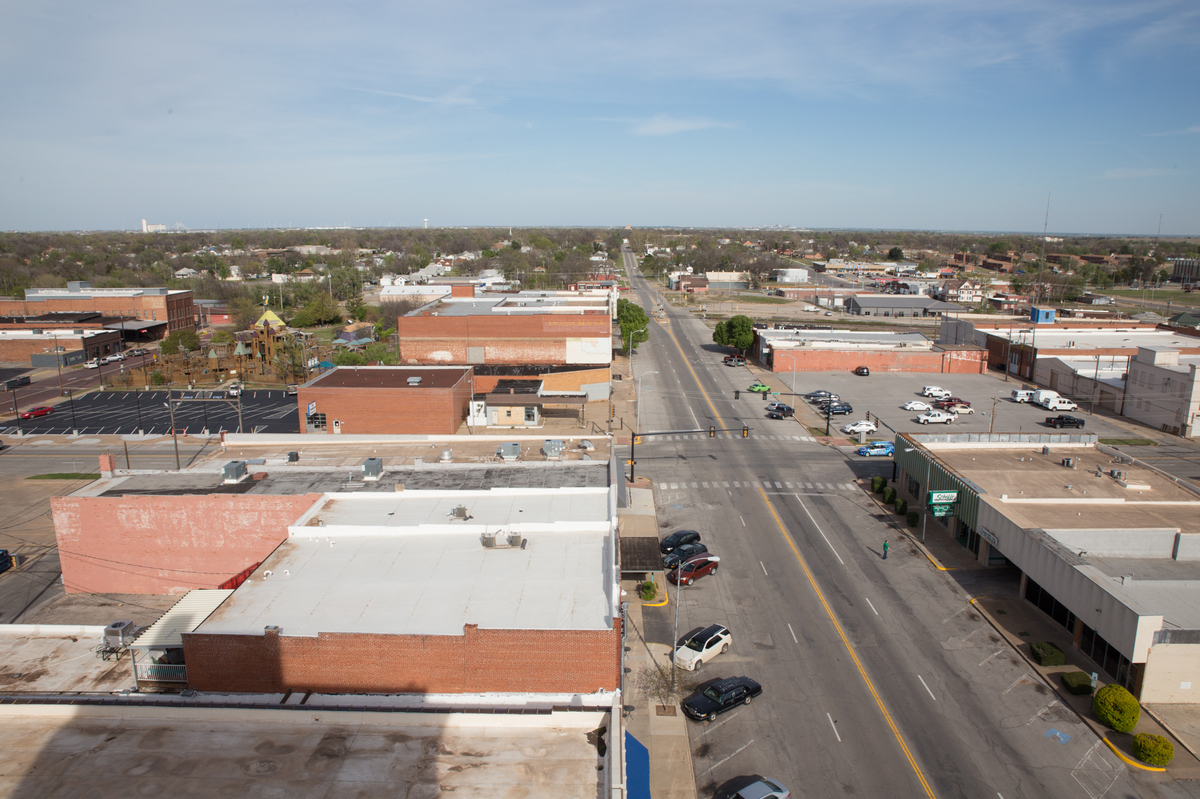 Enid has a population of 50,000 and may be best known as the "wheat capital" of Oklahoma.

Terry Mote is too young to remember the bombs being tested. He does, however, remember what they ate in the decades afterward.

"We begin to be [thinking] eating canned meat is a good thing," Mote says. "But then, at the end of the day, it's not good."

Today the Marshallese have among the highest rates of diabetes in the world.

Like Joseia, Mote's mother Mojina has diabetes, too. And like Joseia, she's uninsured. For Mote and his family, this became a huge problem when his mother had to go into the hospital for treatment and ended up needing to stay there for months.

"We had little knowledge on, you know, when you stay in the hospital for certain days — the bill is running," says Mote. "So by the time she got out from the hospital, I was so surprised."

The bill for treating the complications of her diabetes was $50,000, Mote says, and he could only pay part of it. It was only when he tried to enroll his mom in Medicaid or Medicare, that he found out Marshallese don't qualify for these programs.

In 1983 the Marshall Islands, the Federated States of Micronesia and Palau signed the Compact of Free Association with the U.S., which allowed people from these island nations to settle in the U.S. with limited legal status.

This means that while a path to citizenship is available to them, those who resettled in the U.S. under the treaty were not automatically made citizens. Instead, they were classified as "nonimmigrants." At the time the Marshallese and other COFA communities in the U.S. were eligible for federal health programs.

But that changed in 1996, when Congress passed the Personal Responsibility and Work Opportunity Act. This major piece of welfare legislation effectively reworked the eligibility of people who came to the U.S. under the COFA agreement, stripping Marshall Islanders and other similar communities of their federal health benefits.

For The Marshall Islands, The Climate Goal Is '1.5 To Stay Alive'

After the 1996 legislation was passed, some states, including California and Oregon, used state funds to continue to provide health care services to COFA migrants, according to the Asian and Pacific Islander American Health Forum.

The state of Oklahoma did not choose to do so, which means even longtime legal residents of the state are not eligible for Medicaid and Medicare in Oklahoma if they happen to be Marshallese.

Mote spends much of his time these days thinking about health problems in his community. He's reached out to lawmakers for help, but his attempts to get state legislation introduced that would get health coverage for Oklahoma's Marshallese community have so far failed.

It's a hard sell, he says, because Marshallese can't vote. And the path to citizenship, he says, is tough for a myriad of reasons.

Mote says most Marshallese in his community find the citizenship application process intimidating — and unaffordable. There's the language barrier, he says, and, maybe because the community is close-knit, there tends to be little sense of urgency to assimilate.

Plus, Mote says, most Marshallese believe it's taboo to talk about being sick.

"I feel frustrated," he says. "Because these people need to be healthy — need to be treated like human beings."

He is not giving up.

Mote says he is now applying for citizenship — because he wants to run for City Council and help give Marshallese in Enid a voice.

In the audio, as in an earlier Web version of this report, we say the Marshall Islands are in the South Pacific. In fact, they are in the Central Pacific Ocean. Also, in the audio and an earlier Web version the Castle Bravo test is said to be the largest nuclear explosion in history. In fact, it was the largest such bomb tested by the U.S. The Soviet Union's Tsar Bomba test in 1961 produced the largest nuclear explosion on record, according to the Preparatory Commission for the Comprehensive Nuclear-Test-Ban Treaty Organization.