Accessibility links
More States Allow Medical Marijuana For Children With Autism Spectrum Disorders : Shots - Health News Rhode Island is among a growing number of states allowing children with autism to be treated with medical marijuana. The benefits are unproved and the full extent of the risks are unknown. 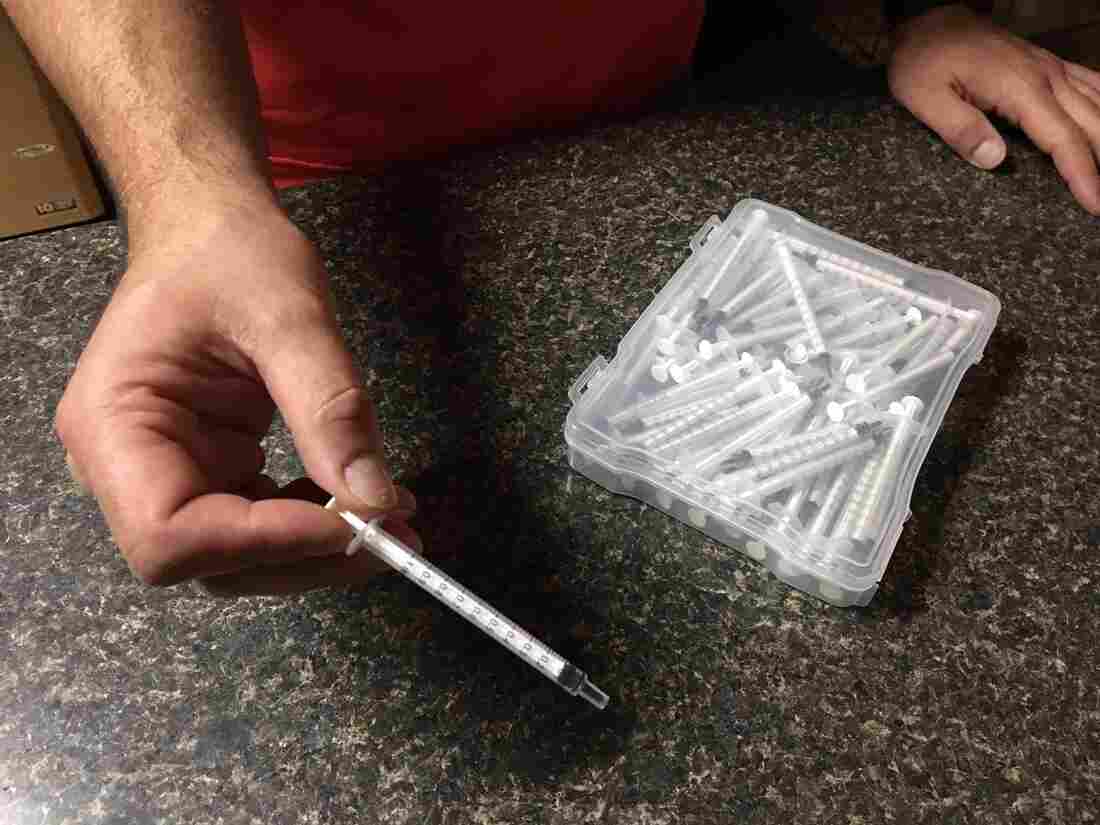 Chris holds a plastic syringe he and his wife use to administer homemade medical marijuana oil to their 13-year-old son, Dylan, who has autism. Lynn Arditi/The Public's Radio hide caption 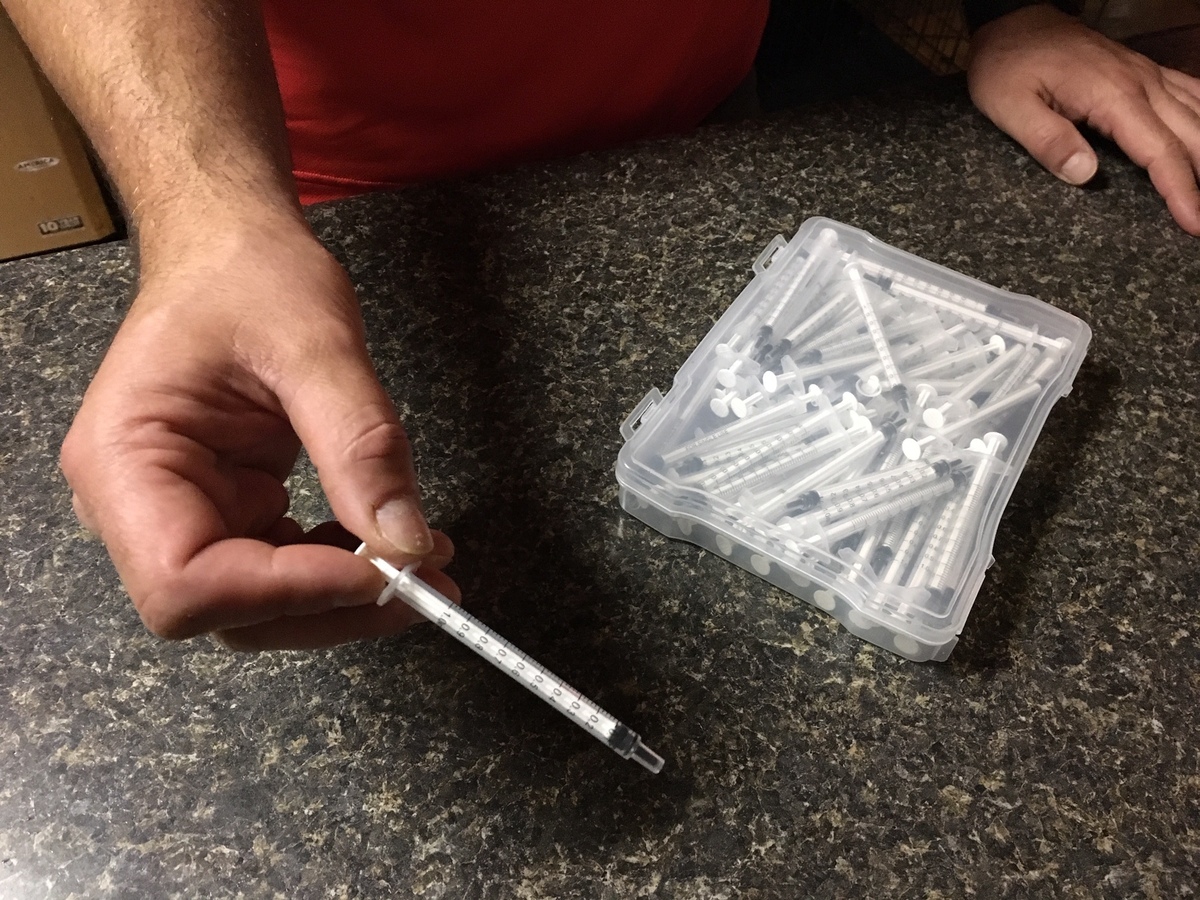 Chris holds a plastic syringe he and his wife use to administer homemade medical marijuana oil to their 13-year-old son, Dylan, who has autism.

One November afternoon inside a raised ranch in Rhode Island, Kristal and Chris' 13-year-old son was just getting home from school.

"Bad!" Dylan says. He's a skinny kid with glasses – still small enough for his mom to wrap him in a bear hug if he gets out of control.

"So on this particularly day, he had 27 instances of property destruction," Kristal says. "He had 25 incidences of aggression. He had only one self-injurious behavior, so that's pretty low."

Their son, Dylan, has an autism spectrum disorder. And his symptoms seem to defy treatment with traditional medicine. (To protect their son's privacy, we're not using the family's last name.)

"You would think a lot of the medications he's been on would tranquilize a horse," Kristal says, ticking off a list of 16 different drugs he's tried, including Ritalin, Klonopin and Abilify.

They have also tried special diets: gluten-free and dairy-free.

Last winter, Dylan's behavior became so out of control he was hospitalized for nearly five weeks.

So a week before Thanksgiving — with the permission of Rhode Island health officials and the support of Dylan's psychiatrist — Kristal and Chris began experimenting with giving Dylan medical marijuana.

Rhode Island is one of a small but growing number of states that allow medical marijuana for treating severe forms of autism.

The decision is raising hopes for some parents of autistic children. But there's scant scientific evidence about the benefits — and risks — of marijuana use in these children.

"The research basis for a lot of the hopes for using medical marijuana for autism - it's really minimal," says David G. Amaral, a psychologist and research director of the M.I.N.D. Institute at University of California, Davis. (M.I.N.D. stands for Medical Investigation of Neurodevelopmental Disorders.) "I mean there's very meager clinical evidence for effectiveness."

Anxiety Relief Without The High? New Studies On CBD, A Cannabis Extract

Meager evidence because there have been no large clinical trials to determine whether marijuana or its compounds are effective — or safe — in treating children with autism.

"Unless there's a clinical trial done in the right way and showing the safety, No. 1, of the drug," Amaral says, "and then the benefit of it ... it may be that families are wasting their time — and maybe exposing their family members to a potentially dangerous situation."

That's not to say that marijuana doesn't hold promise for autism treatment. In fact, the first large-scale clinical trial in the U.S. to test the idea is just getting underway at Montefiore Medical Center in New York.

The trial, funded with a $1.3 million grant from the U.S. Department of Defense, will examine the effectiveness of a cannabis-based compound known as CBDV (which stands for cannabidivarin) on irritability and repetitive behaviors in children with autism spectrum disorders.

The study's lead researcher, Dr. Eric Hollander, directs the Autism and Obsessive Compulsive Spectrum Program at Montefiore Medical Center and the Albert Einstein College of Medicine. The trial is expected to enroll about 100 patients and be completed in 2021.

They've been poring over online posts from other parents of autistic children about their experiences with medical marijuana. Kristal reads aloud from another mother's post:

"Had to share this behavior chart ...The high marks are from last summer – crazy, awful behaviors. He always regresses in the summer. The circled area highlights the major drop in behaviors. The difference between then and every single summer in the past and now: medical marijuana."

"In some ways I think about it like cancer care," says Dr. Todd Levine, a psychiatrist who specializes in working with children with autism at Women & Infants Hospital of Rhode Island in Providence. "If your kid has cancer and you're failing chemotherapy and someone at NIH says we have an experimental drug, you'll go."

Levine, who treats Dylan, is supporting his parents' decision to see if medical marijuana can help their son.

In their kitchen, Kristal shakes a medicine bottle filled with homemade marijuana oil.

"Do your medicine real quick?" she says to Dylan.

His parents have learned to ignore these outbursts. Dylan paces and then settles down.

Kristal uses a plastic dosing syringe to draw out 25 milligrams of homemade cannabis-infused olive oil and squirts it into Dylan's open mouth.

And already Chris, says, they feel like it's working.

"I notice in the morning he's been a little easier to get along with," Chris says. "He's not as angry. He's not waking up angry, he's waking up and, and you know, just getting ready and doing his thing, and asking to get dressed and asking for breakfast."

These reports from parents – along with input from local doctors and a review of the medical literature — helped persuade Rhode Island health officials to add autism as a qualifying condition for medical marijuana.

"Severe autism in particular is not a curable disease, and there are very few treatment options," says Dr. Nicole Alexander-Scott, director of Rhode Island's health department. "So there's a compassionate-care element to this."

Rhode Island's new regulations require doctors to first try the medications approved by the Food and Drug Administration — and consult with a child psychiatrist or pediatric neurologist — before approving children for medical marijuana.

Besides Rhode Island, at least six other states have added autism to the list debilitating conditions that can qualify patients – including children – for medical marijuana.