Robert and Tiffany Cano of San Tan Valley, Ariz., have a new marriage, a new house and a 10-month-old son, Brody. Since Brody was born, the Canos have racked up nearly $12,000 in medical debt. Heidi de Marco/Kaiser Health News hide caption Robert and Tiffany Cano of San Tan Valley, Ariz., have a new marriage, a new house and a 10-month-old son, Brody. Since Brody was born, the Canos have racked up nearly $12,000 in medical debt.

Robert and Tiffany Cano of San Tan Valley, Ariz., have a new marriage, a new house and a 10-month-old son, Brody, who is delighted by his ability to blow raspberries.

They also have a stack of medical bills that threatens to undermine it all.

In the months since their sturdy, brown-eyed boy was born, the Canos have acquired nearly $12,000 in medical debt — so much that they need a spreadsheet to track what they owe to hospitals and doctors.

"I'm on these payment arrangements that are killing us," said Tiffany Cano, 37, who has spent her lunch hours from her job at a regional bank on the phone negotiating payoff plans that now total $700 a month. "My husband is working four jobs. I work full time. We're a hardworking family doing our best and not getting anywhere."

The pair, who earn nearly $100,000 a year, are insured and have had no major illnesses or injuries. Still, the Canos are among the 1 in 4 Americans who report in multiple polls that the high cost of health care is the biggest concern facing their families. And they're at risk of filing for bankruptcy; 62 percent of people who file do so, in part, because of medical bills.

"Oh, yes, that worry is always in the back of my mind," Tiffany said.

The family is part of a struggling group: Middle-class folks who have followed the rules and paid for employer-based medical insurance, only to find that soaring health care costs — combined with high deductibles, high copayments and surprise medical bills — leave them vulnerable.

"I thought we'd be covered, and it's just not enough coverage at all," she said.

Robert Cano, also 37, had family health insurance for 2018 through his job as a manager at a large chain retail store, for which he pays nearly $500 per month. The plan's $3,000 annual deductible and 40 percent coinsurance fees have added up faster than the Canos anticipated.

First came the nearly $4,000 bill from the in-network hospital where Brody was born Jan. 2, followed by separate fees from the anesthesiologist and the doctor who performed the routine delivery. Then, at 2 months, Brody was hospitalized with breathing problems that doctors said could be related to allergies or asthma. In May, Tiffany came down with a stomach virus that sent her to the emergency room for drugs to treat nausea and dehydration. Last month, the baby developed a bad case of bacterial conjunctivitis, or pinkeye.

"It's been, like, $300 here, $700 there," said Tiffany. "We had a hospital bill for him being sick of, like, $1,800." Unable initially to find a pediatrician she liked, Tiffany has agonized over whether to use the ER when Brody gets sick. When he had pinkeye, she debated whether to take him in, hoping it would get better on its own.

Then he got worse, she said, pulling up a photo on her phone of her son with half-moons of red, puffy flesh under his dark eyes.

"I let him suffer for a day like that," she said.

The Canos lost their first child, a girl, midway through her pregnancy in 2016. Tiffany acknowledges that experience has left her more anxious than the average first-time mom.

"It gave me so much fear that something would happen to him," she said.

As for their own health care needs, the couple put themselves lower on the priority list. Tiffany has used a prosthetic limb since childhood, when her lower left leg was amputated because of a birth defect.

She needs a new prosthesis because her body changed during pregnancy, but she can't see how to afford it.

A model suitable for the busy life of a working mom would easily cost $10,000 to $15,000, according to Tom Fise, executive director of the American Orthotic & Prosthetic Association. 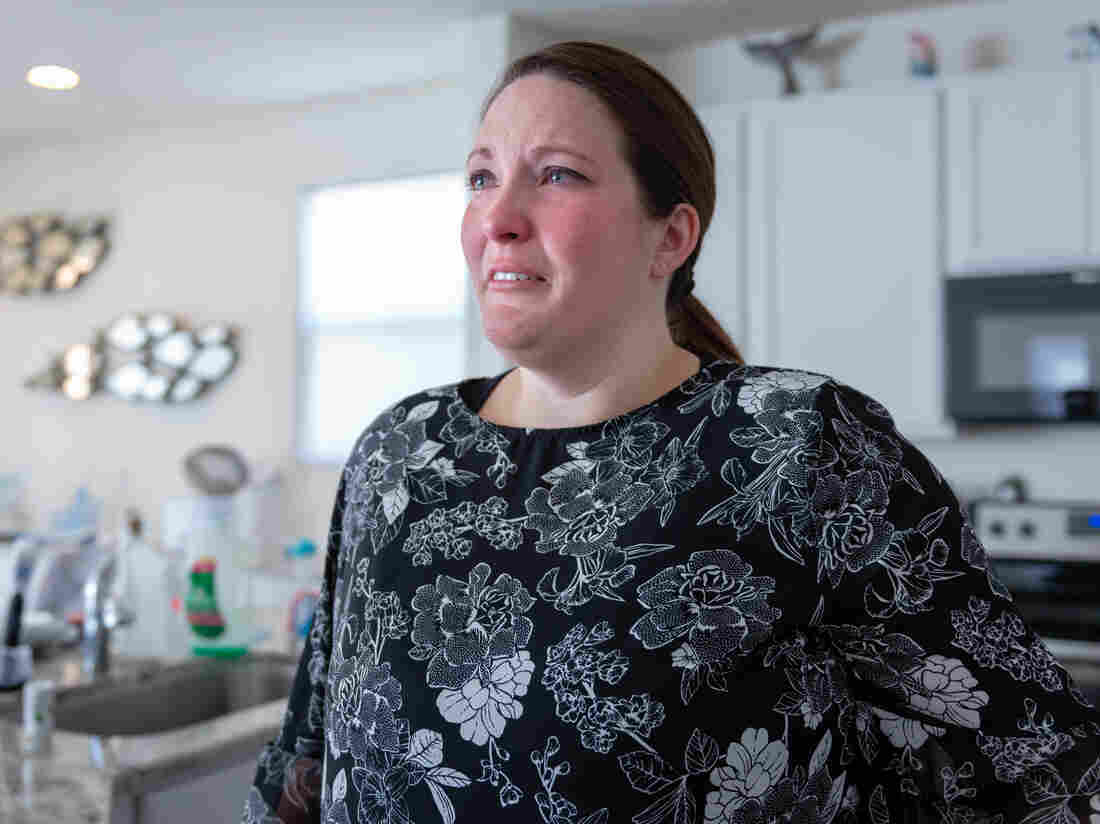 "We're a hardworking family doing our best and not getting anywhere," said Tiffany Cano, with tears in her eyes. Heidi de Marco/Kaiser Health News hide caption "We're a hardworking family doing our best and not getting anywhere," said Tiffany Cano, with tears in her eyes.

"I try to push through," Tiffany said. "I put on that brave face of just walking, but it's so painful to walk. I have bruises all over my leg. I get blisters all the time." Lately, she has been wearing an old prosthesis, one she used in high school, because it's a little bit more comfortable.

The Canos don't know how exactly they fell into such debt, because they tried hard to make responsible decisions. After meeting three years ago, they knew quickly that they wanted to marry and have a family.

"I waited until I found the right guy," said Tiffany, who was thrilled when, in 2016, they were able to afford a 2,500-square-foot, two-story home in one of the stucco-and-tile neighborhoods an hour outside Phoenix.

But, taken together, the medical payment plans and premiums are almost as much as their $1,300 monthly mortgage. All told, the Canos spend about 15 percent of their annual income on health care, almost three times the average for non-Medicare households in the U.S.

That leaves too little for day care, car payments, gas, food and dozens of other domestic expenses, Tiffany said.

For 17 years, Robert had comprehensive health insurance through his job as a soldier in the Army Reserve and paid little or nothing for medical care. He left the Army in 2017, however, after he learned he would be deployed for an extended time away from his wife and new son.

"I told them, 'I have to be at home,' " he recalled. The Army insurance ended on Dec. 31, two days before Brody was born.

That meant moving to his employer's insurance plan. Like more than 40 percent of 152 million Americans who get health insurance through work, the Canos are enrolled in a plan that demands thousands of dollars before any coverage kicks in.

The couple discovered that they earn too much to qualify for financial assistance from medical providers or for subsidies if they shifted their insurance to a plan under the federal health insurance exchange. She is a full-time bank compliance officer. He is a full-time store manager.

Dr. Merrit Quarum, the chief executive of WellRithms, a health care consulting firm, reviewed the family's medical bills and the responses from their health care providers.

Though Quarum had questions about some of the fees in the itemized bills — $4 for a 600-milligram ibuprofen tablet? $3,125 to place an epidural? — he found the charges were legitimate under the terms of the contract between the hospital and the Canos' insurer.

Tiffany's only recourse was to set up the five payment plans she navigates each month. 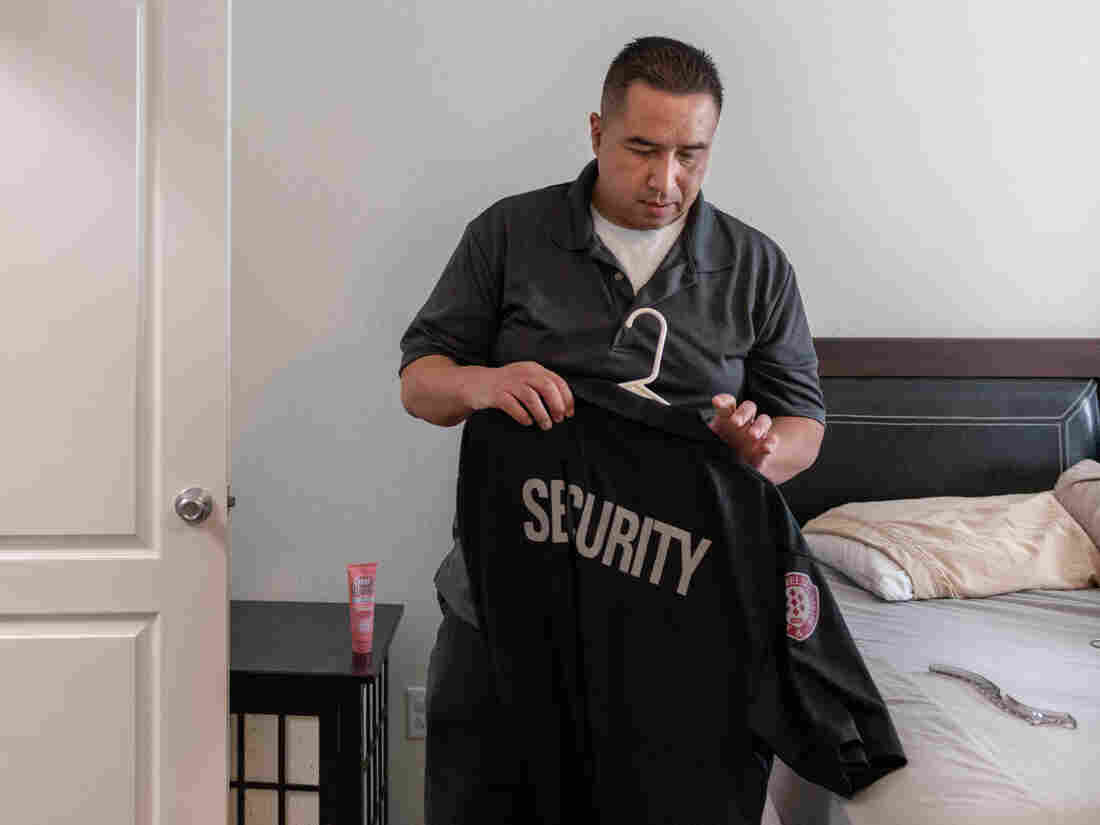 Robert Cano works up to 120 hours a week, mostly to cover the extra costs of his family's health care. Besides a retail job, he works as a substitute teacher, a nighttime security guard and as a sandwich deliveryman. Heidi de Marco/Kaiser Health News hide caption 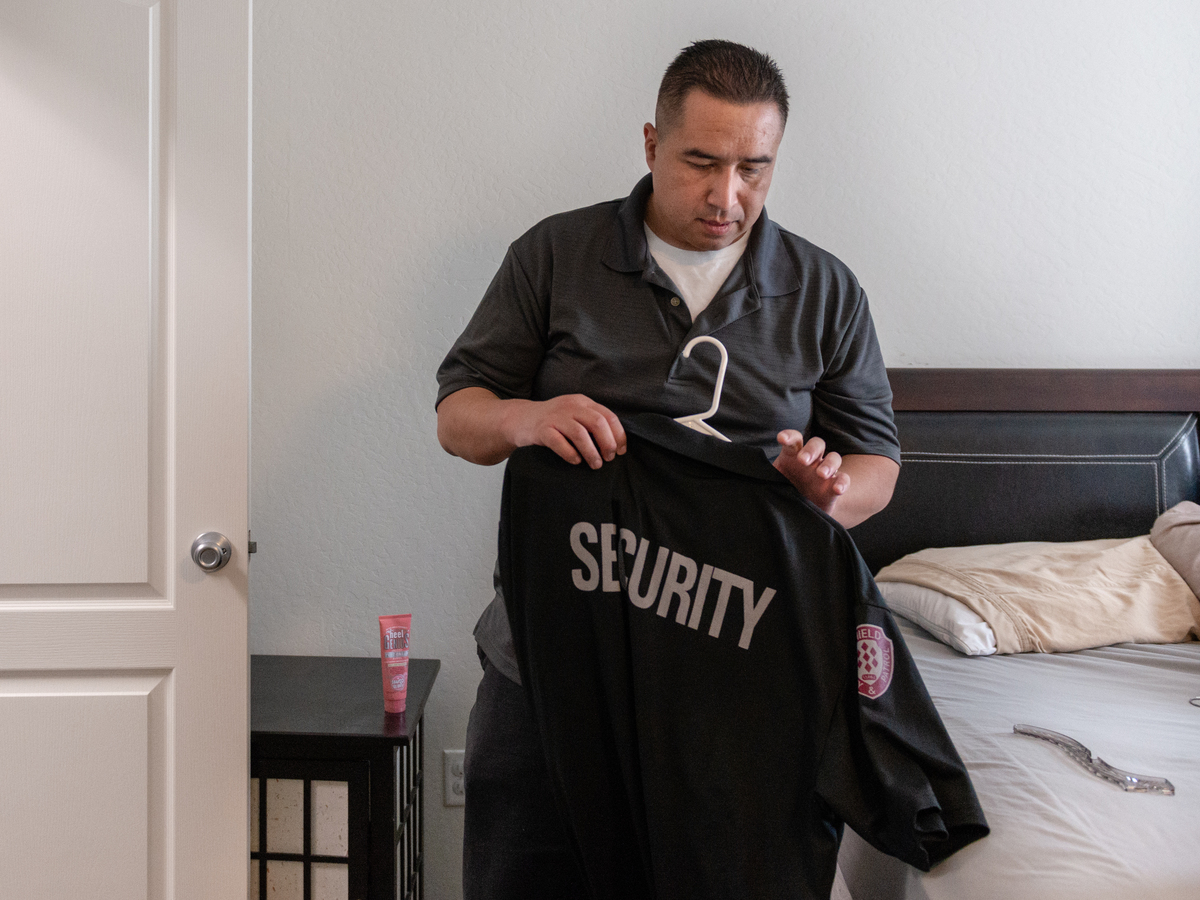 Robert Cano works up to 120 hours a week, mostly to cover the extra costs of his family's health care. Besides a retail job, he works as a substitute teacher, a nighttime security guard and as a sandwich deliveryman.

Mostly to pay off that health care debt, Robert has taken several part-time gigs this year — as a substitute teacher, a nighttime security guard and a sandwich deliveryman for a fast-food chain in Scottsdale, 40 miles away, where tips are better. He said he sometimes works up to 120 hours in a week.

"I'm not ashamed or embarrassed, even as old as I am, to deliver sandwiches," he said, pulling on his retail chain polo shirt before rushing to a Saturday morning shift. "I know people, they'd rather get food stamps and feel sorry for themselves. But I'm a fighter. I will not give up ... If I can bring in an extra $400 a week or $800 a month, she can get what she needs for the baby."

Often home after midnight, he keeps shampoo and shaving cream in his car and naps in parking lots between jobs, relying on Red Bull to stay alert.

That means on many nights, when Tiffany picks up Brody from day care after her 90-minute commute, she handles most of the chores at home.

"Sometimes I feel like a single mom because my husband is never around," she said.

She carefully tracks the family's medical expenses, trying to juggle them with ordinary outlays that can't wait — like $500 for the brakes that went out on her car this month.

At the rate they're going, the bills won't be paid until Brody is 3, Tiffany said. The Canos are getting older and they would like to have another baby before it's too late, but, for now, that seems impossible.

For 2019, the couple have decided to switch to a different plan offered through Tiffany's employer. The premium is higher — $650 a month — but the deductible is $1,500 with just 10 percent coinsurance.

"It is going to be a lot more per paycheck, which is going to hurt us," Tiffany said. "But after what just happened, I want to make sure we are prepared in case anything does occur."

How to fix a health care system that burdens middle-class families so heavily is beyond her, she said.

"The only thing we can do is just keep working," Tiffany said. "I always wonder: How does everybody else do it?"