Accessibility links
Aging Brains Stay Sharper With Daily Housework And Exercise : Shots - Health News Whether it's exercise or housework, older Americans who move their bodies regularly may preserve more of their memory and thinking skills, even if they have brain lesions and other signs of dementia. 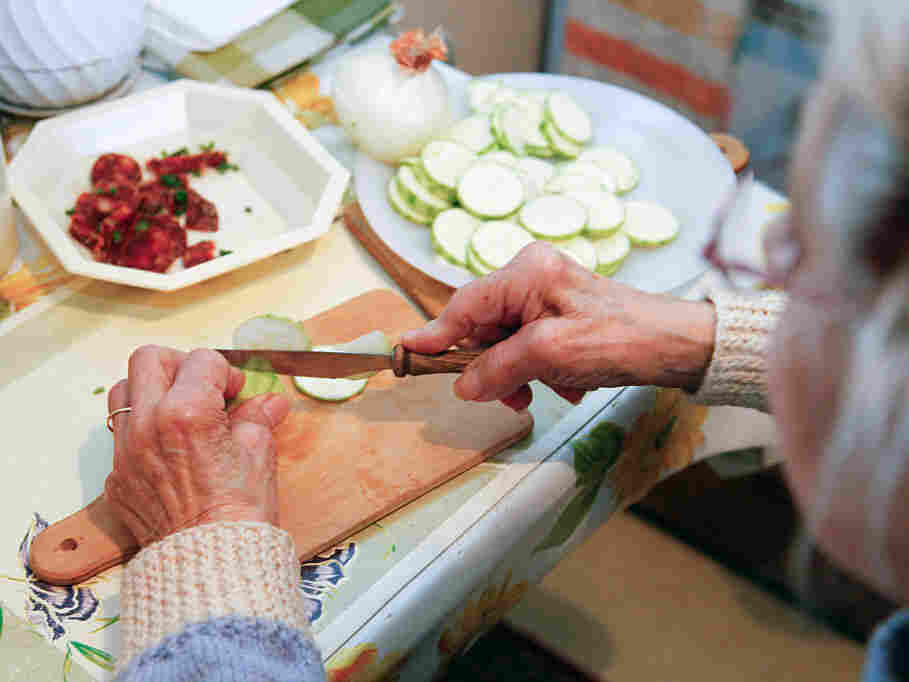 Even something as simple as chopping up food on a regular basis can be enough exercise to help protect older people from showing signs of dementia, a new study suggests. BSIP/UIG/Getty Images hide caption 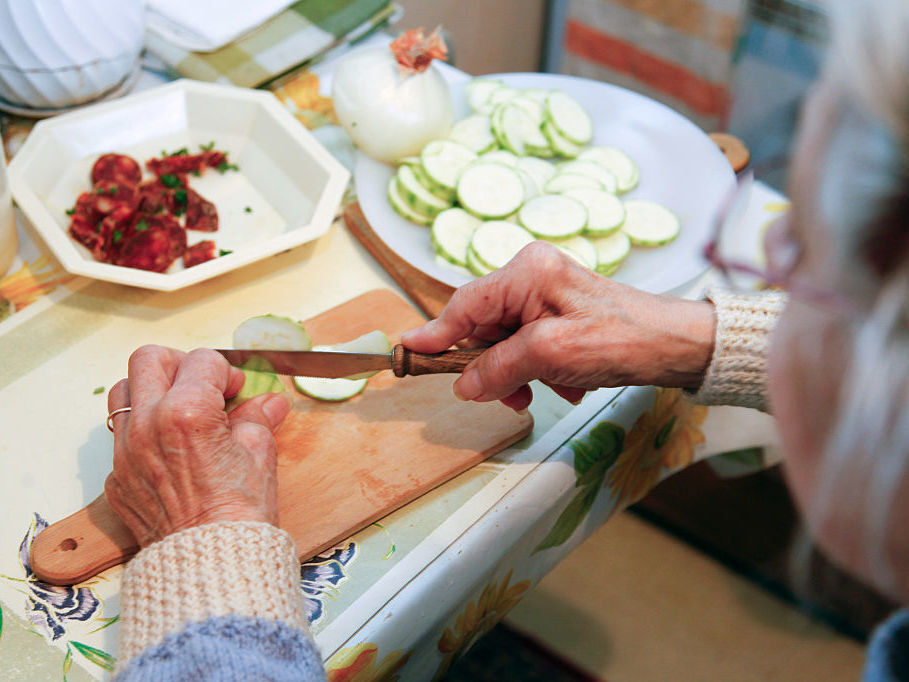 Even something as simple as chopping up food on a regular basis can be enough exercise to help protect older people from showing signs of dementia, a new study suggests.

Want to reduce your risk of dementia in older age? Move as much as you can.

We've all heard about techniques to get us more physically active — take the stairs, park the car a bit further from your destination, get up and march in place for a minute or two when standing or sitting at a desk.

Now a study finds even simple housework like cooking or cleaning may make a difference in brain health in our 70s and 80s.

"Exercise is an inexpensive way to improve health and our study shows it may have a protective effect on the brain," says Dr. Aron S. Buchman with Rush University Medical Center in Chicago, who led the study.

The new study, published Wednesday in the online issue of Neurology, is unique because Buchman was able to analyze the actual brains of study participants. The findings are a "great thank you" to the participants who agreed to donate their brains for research after death, he says.

The study looked at 454 older adults who were 70 or older when the research began. Of those adults, 191 had behavioral signs of dementia and 263 did not. All were given thinking and memory tests every year for 20 years.

In the last years of research before death, each participant wore an activity monitor called an accelerometer, similar to a Fitbit, which measured physical activity around the clock — everything from small movements such as walking around the house to more vigorous movements like exercise routines. Researchers collected and evaluated 10 days of movement data for each participant and calculated an average daily activity score.

The findings show that higher levels of daily movement were linked to better thinking and memory skills, as measured by the yearly cognitive tests. And when Buchman analyzed brain tissue under a microscope, this finding turned out to be the case even for individuals with at least three signs of Alzheimer's disease, such as amyloid plaques and neurofibrillary tangles. Even though these individuals might have been diagnosed with Alzheimer's, 30 percent of them had "normal" cognition at death, says Buchman.

Why one person shows signs of dementia and another, who has similar degenerative changes in the brain, does not, is a mystery. But Buchman says the new findings suggest that physical activity may be protective, even amidst developing Alzheimer's. It sort of masks the symptoms, he says, and is an "empowering finding" suggesting you can have some control over your brain health even if you don't have control over developing Alzheimer's.

And, while intense activity and exercise is highly beneficial, even light activity can make a difference, says Buchman. "As long as you have some activity and you're moving, whether you're chopping onions, typing, sweeping the floor or even running," you can reduce your risk of cognitive decline.

The findings are impressive, says research scientist Carl Cotman, director of the Institute for Brain Aging and Dementia at the University of California, Irvine, showing that physical activity may "offset the ill effects of brain degeneration." He adds that lifestyle interventions such as an increase in physical activity and movement can be powerful even in the presence of disease. Cotman was not involved in the research.

But exactly how the protective effect may work is unclear. Buchman says the current findings are a "great start" but he hopes to look more closely at participant's brains to measure different proteins and try to identify which ones might link physical activity to better cognition.

There are some caveats to the study. The findings do not show clear cause and effect. Study participants with dementia had significantly lower indications of movement compared to those without dementia. It may be possible that as people lose memory and thinking skills, they also reduce their physical activity.

And the study did not have data on how active participants were over the course of their lives. It could be that older adults who moved more were also lifelong exercisers so it's not known if physical activity in early life may have played a role.

While previous research suggests that people may be able to beat back dementia with exercise, Buchman acknowledges that "more studies are needed to determine if moving more is truly beneficial to the brain."