Accessibility links
To Address Disparities, Med Students Push For More LGBT Health Training : Shots - Health News One in 5 LGBT adults has avoided medical care for fear of discrimination, according to a recent survey, and 80 percent of physicians surveyed say they feel "not competent" to treat LGBT patients. 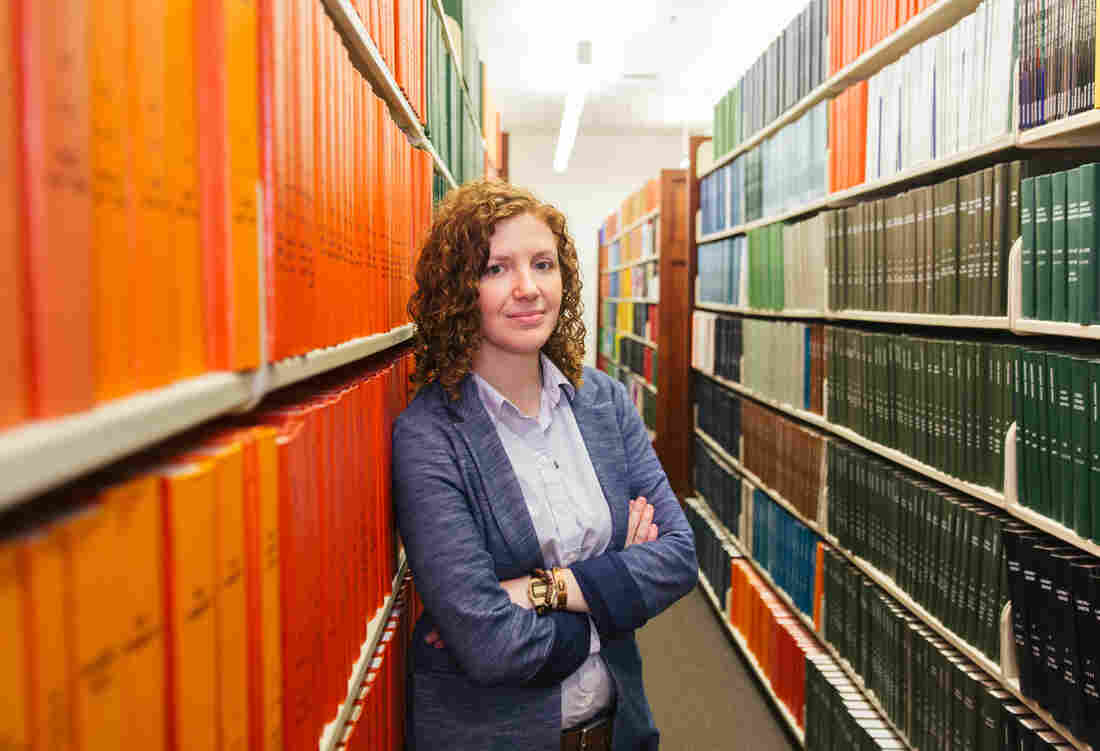 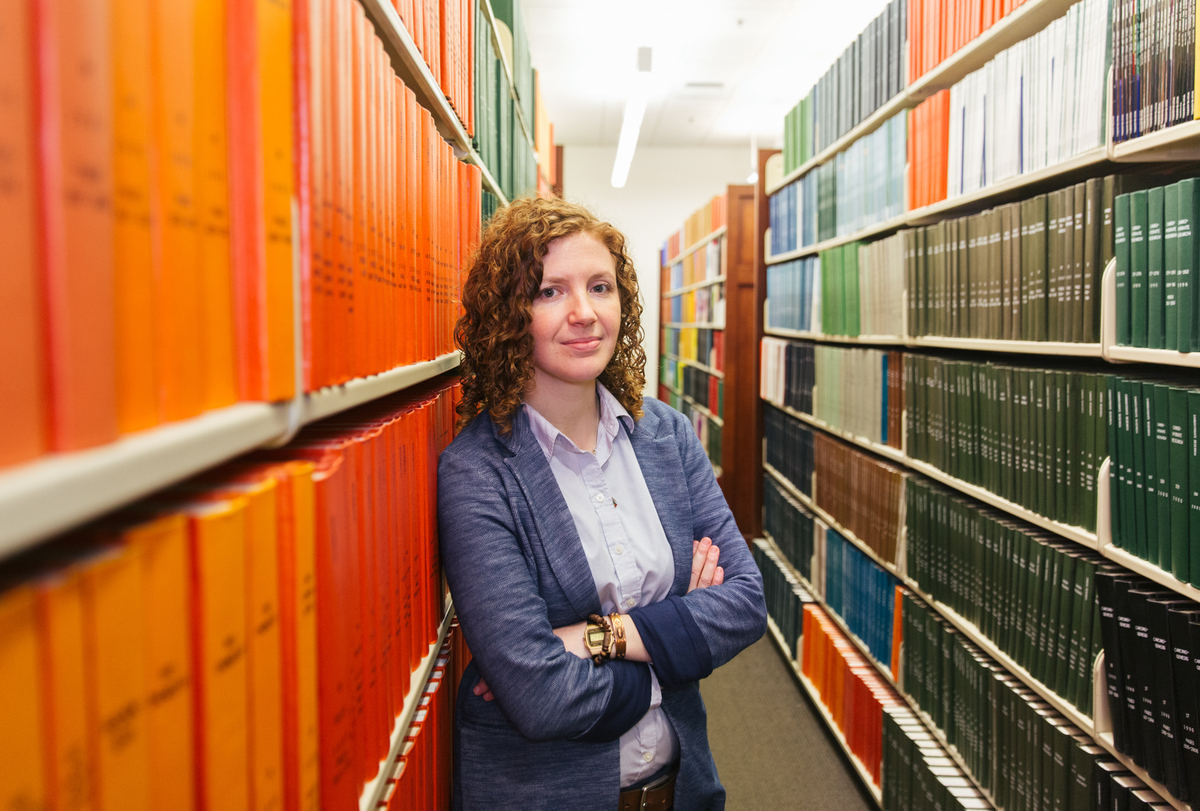 When Sarah Spiegel was in her first year at New York Medical College in 2016, she sat in a lecture hall watching a BuzzFeed video about what it's like to be an intersex or a transgender person.

"It was a good video, but it felt inadequate for the education of a class of medical students, soon to be doctors," says Spiegel, now in her third year of medical school.

The video, paired with a 30-minute lecture on sexual orientation, was the only LGBT-focused information Spiegel and her fellow classmates received in their foundational course.

"It's not adequate," Spiegel remembers thinking. By her second year, after she became president of the school's LGBT Advocacy in Medicine Club, she rallied a group of her peers to approach the administration about the lack of LGBT content in the curriculum. 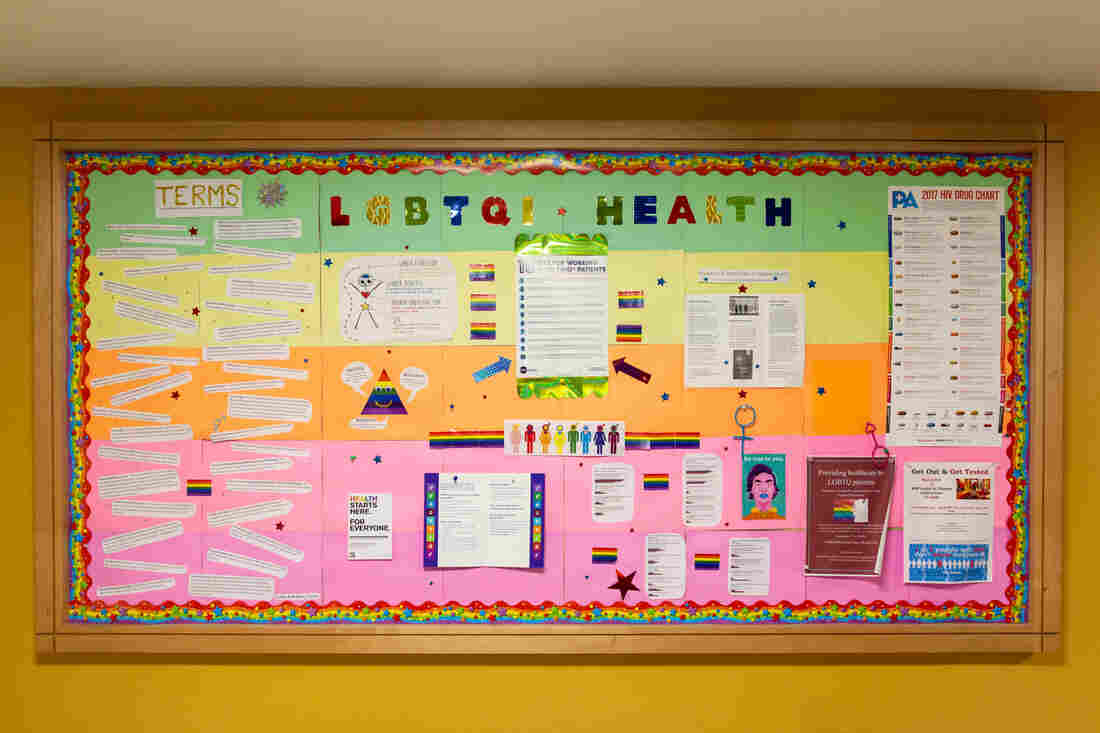 Spiegel and her friends created an LGBTQI health board of information which hangs in a hallway on campus at New York Medical College. Mengwen Cao for NPR hide caption 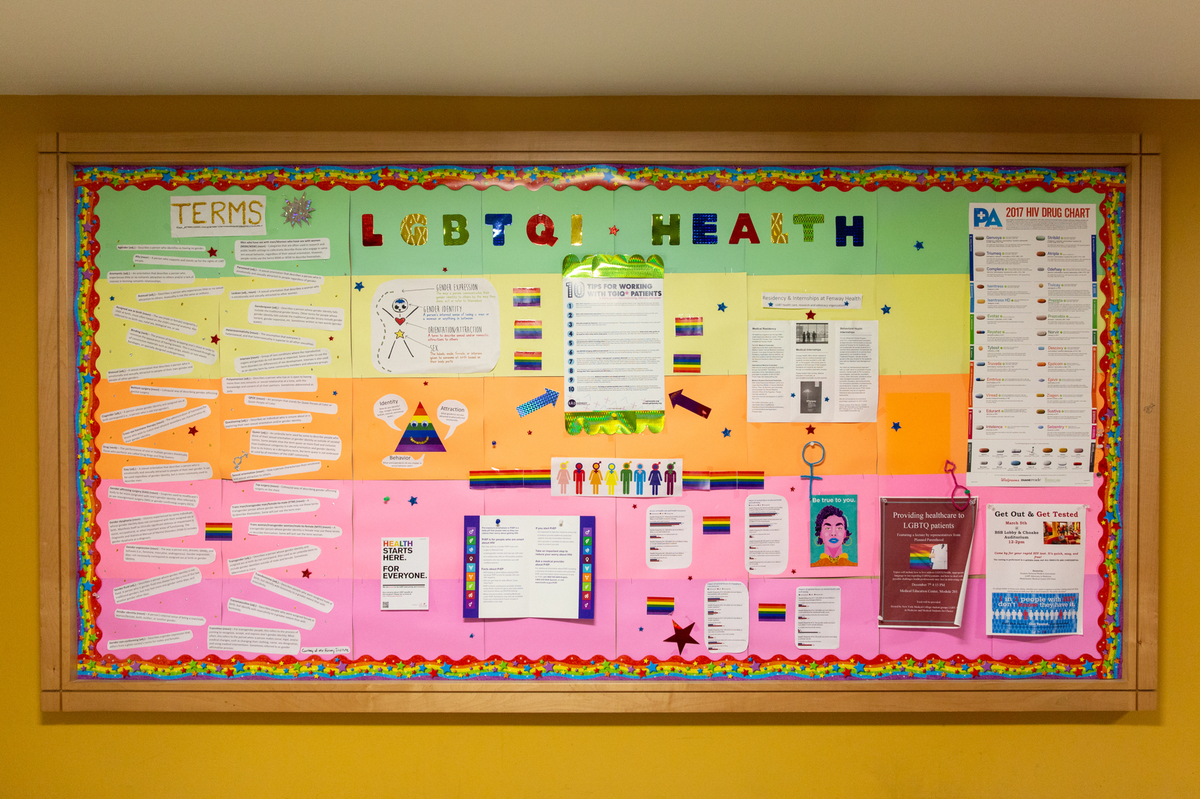 Spiegel and her friends created an LGBTQI health board of information which hangs in a hallway on campus at New York Medical College.

Spiegel says administrators were "amazingly receptive" to her presentation, and she quickly gained student and faculty allies. As a result, the school went from one and a half hours of LGBT-focused content in the curriculum to seven hours within a matter of two years, according to Spiegel. Spiegel says she doesn't think the change would have happened had the students not pushed for it.

According to a number of studies, medical schools do a poor job of preparing future doctors to understand the LGBT population's unique needs and health risks. And, a 2017 survey of students at Boston University School of Medicine found their knowledge of transgender and intersex health to be lesser than that of LGB health.

Meanwhile, LGBT people — and transgender people in particular – face disproportionately high rates of mental illness, HIV, unemployment, poverty, and harassment, according to Healthy People 2020, an initiative of the U.S. Department of Health and Human Services. And a poll conducted by NPR, the Robert Wood Johnson Foundation, and the Harvard T.H. Chan School of Public Health found 1 in 5 LGBT adults has avoided medical care due to fear of discrimination.

"The health of disparity populations is something that really should be the focus of health profession students," says Dr. Madeline Deutsch, an associate professor of family and community medicine at the University of California, San Francisco. Deutsch directs UCSF's Transgender Care program, and she says medical schools already do a fairly good job of addressing some disparities, like those based on race, ethnicity, and socio-economic status.

The extent of LGBT education medical students receive varies greatly, but a 2011 study found that the median time spent on LGBT health was five hours. The topics most frequently addressed include sexual orientation, safe sex, and gender identity, whereas transgender-specific issues, including gender transitioning, were most often ignored. And some medical students receive no LGBT education at all.

"There's not really a consistent curriculum that exists around this content," says Deutsch.

As a result, physicians often feel inadequately trained to care for LGBT patients. In a 2018 survey sent out to 658 students at New England medical schools, around 80 percent of respondents said they felt "not competent" or "somewhat not competent" with the medical treatment of gender and sexual minority patients.

Even at UCSF, which has long been at the forefront of LGBT health care, Deutsch says there's still a need to insert more transgender health care into the mandatory curriculum. Right now, when medical schools teach about LGBT health issues, it's usually through special elective courses or lectures taught at night or during lunch, and often by the students themselves.

"How do we take it out of the lunchtime unit?" asks Jessica Halem, the LGBT program director at Harvard Medical School. That question drives Harvard Medical School's new Sexual and Gender Minorities Health Equity Initiative, a three-year plan to assess the core medical school curriculum and to identify opportunities to better instruct on the health of sexual and gender minorities.

"Students are getting the information. But some of them are having to do a lot of extra work to get that during their medical school experience," says Halem.

The Harvard initiative, announced in December 2018, has been ongoing for about six months, says Halem, thanks to a $1.5 million gift from Perry Cohen, a transgender man. According to Halem, Cohen hopes that Harvard's learnings will be shared with medical schools across the country, especially with ones with less robust LGBT health education programs.

And now, Halem says, each incoming class at Harvard Medical School is increasingly adamant that they learn about LGBT health.

"The main first driver truly was medical students organizing and saying 'Hey, I need the curriculum to reflect the kind of medicine that I came here to study,' " Halem says. 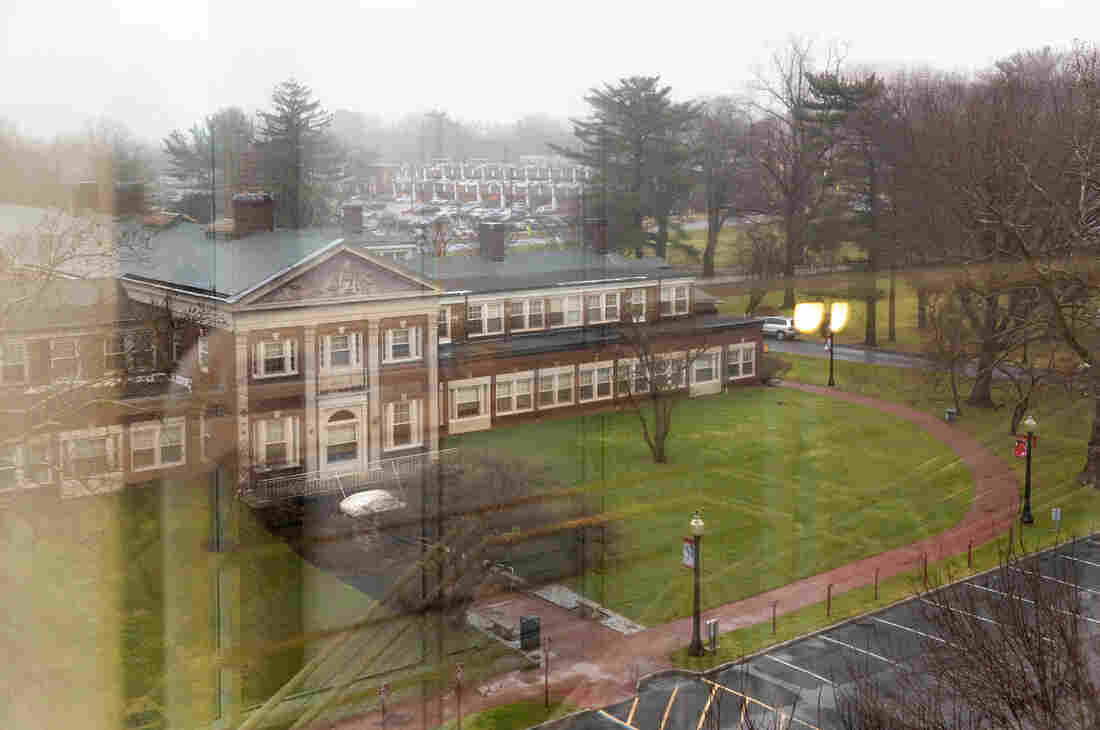 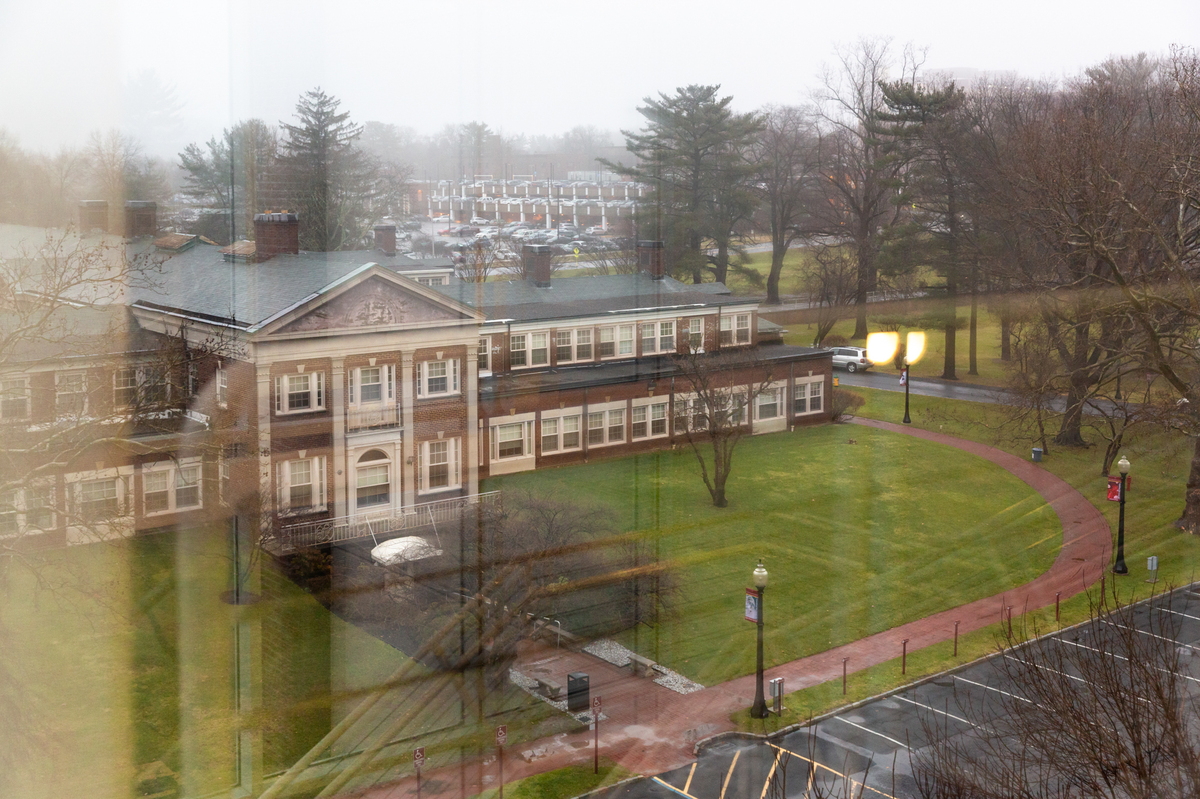 Those were the thoughts running through Spiegel's head in her own preclinical years at New York Medical College. Shortly after becoming the president of her school's LGBT health club, she joined The American Medical Student Association's Gender and Sexuality Committee as the LGBTQ Advocacy Coordinator to bring curricular change to other medical schools in the New York area.

"His experience definitely varied by how much providers knew," Spiegel says. It was often as simple as getting his pronouns correct, she says, and even then, the same doctors' office would mess that up again and again.

Spiegel says in the past couple of years, certain disciplines have added trans-focused topics into their specialties. In the school's behavioral health unit, for example, professors have started to address how doctors can diagnose gender dysphoria – when a person feels their assigned gender does not align with their gender identity – in their lectures.

In The Hospital, There's No Such Thing As A Lesbian Knee

By contrast, some disciplines have been more hesitant to change, or add content to, their existing curriculum. Spiegel's student task-force had more difficulty influencing the pharmacology department, for example. That's the content area where hormone therapy might be taught, Spiegel says.

One course includes a lecture about the endocrine system, Spiegel says, when the professor talks about a drug to treat precocious, or early puberty. That drug can also be used for kids undergoing transgender hormone therapy. Therefore, Spiegel says, including transgender health in the lecture might be a matter of just saying an extra sentence.

"There's an opportunity there – they would just have to mention that it could also be used for transgender kids," says Spiegel.

But the professor says this secondary use of the drug was "off the book," and thus, he wouldn't include it in his lecture. So Spiegel researched the drug herself, and sent the professor the Endocrine Society's guidebook that talked about how the drug can be used for transgender patients. He began including the information in his lectures.

Spiegel says her interactions with this professor exemplify the challenges that medical students all over the country face when trying to introduce changes to their schools' curricula.

"We're getting there, but it's slow," says Spiegel.

Rachel D. Cohen is a freelance journalist and a former intern on NPR's Science desk.