Accessibility links
CRISPR And Human Embryo Experiments Underway In The U.S. : Shots - Health News Despite outrage over gene editing in China that affected the birth of twins, research is underway in the U.S. to assess the safety and effectiveness of CRISPR tools to edit genes in human embryos. 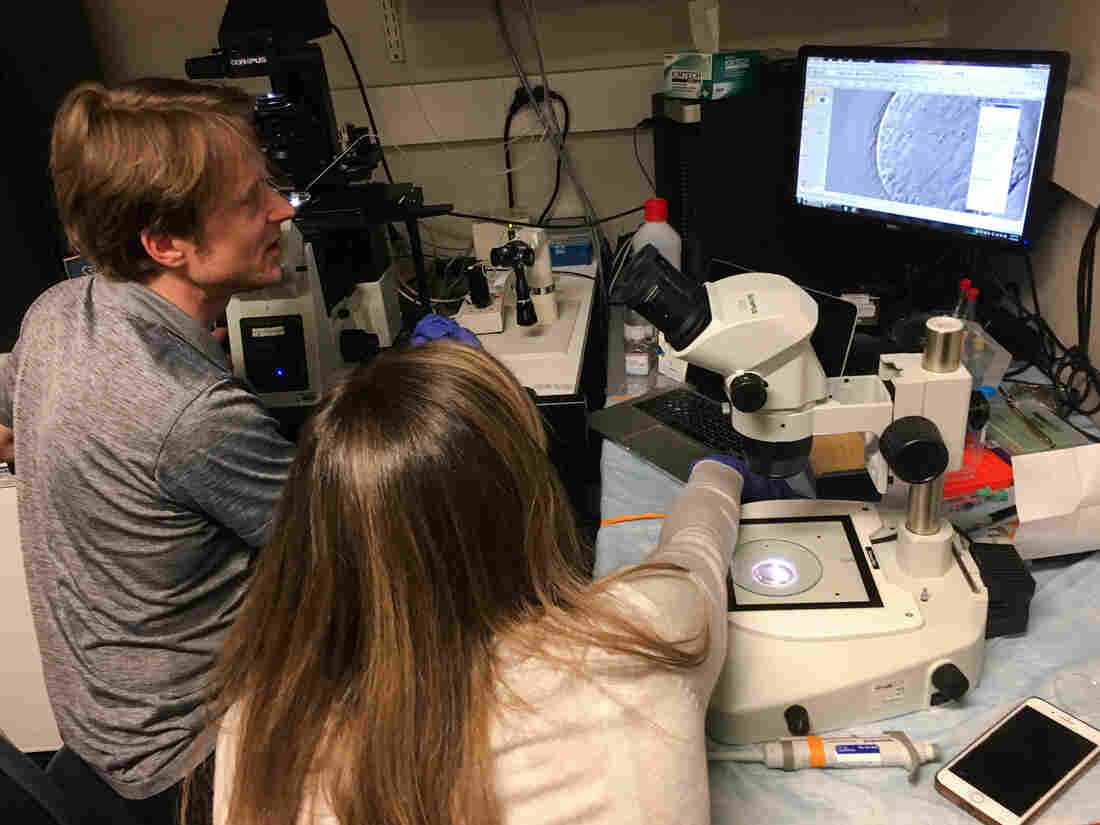 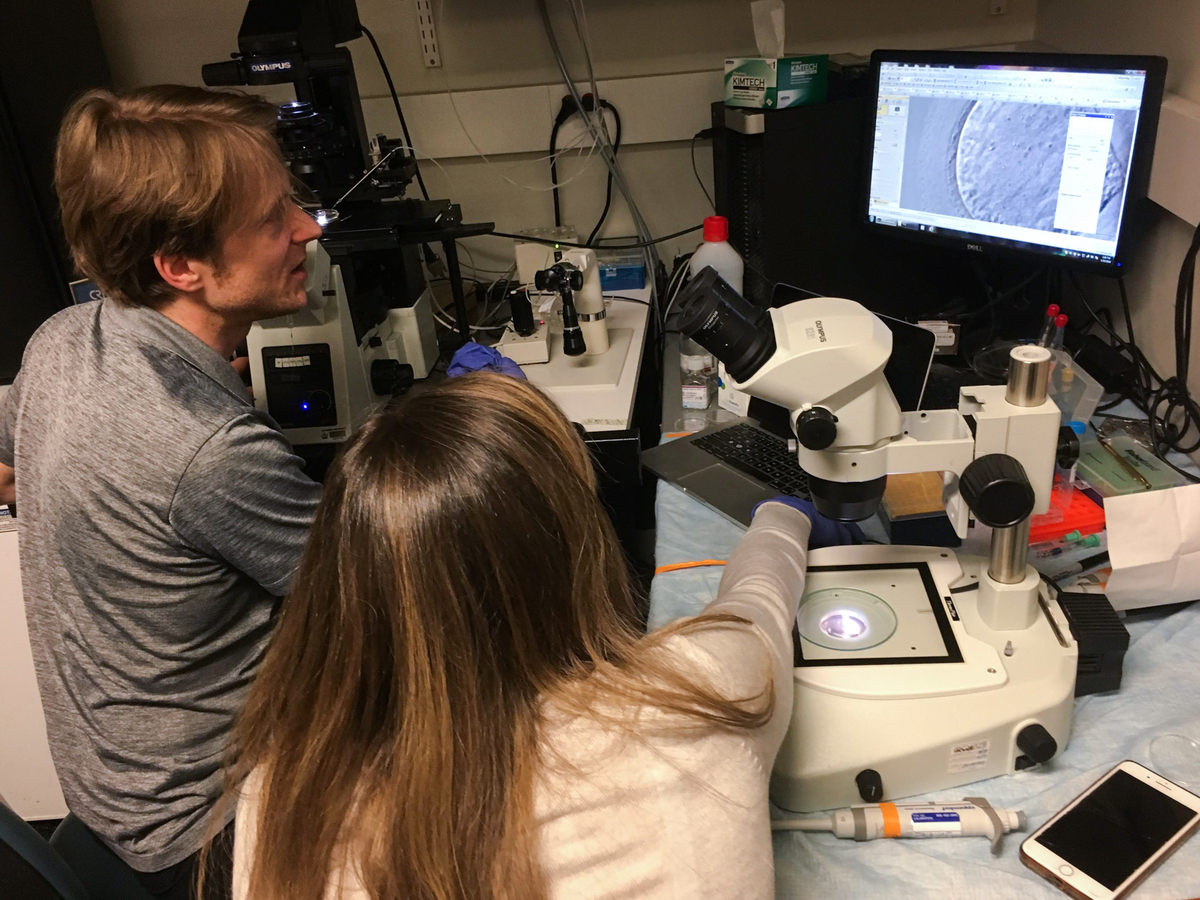 A scientist in New York is conducting experiments designed to modify DNA in human embryos as a step toward someday preventing inherited diseases, NPR has learned.

For now, the work is confined to a laboratory. But the research, if successful, would mark another step toward turning CRISPR, a powerful form of gene editing, into a tool for medical treatment.

A Chinese scientist sparked international outrage in November when he announced that he had used the same technique to create the world's first gene-edited human babies. He said his goal was to protect them from infection with HIV, a claim that was criticized because there are safe, effective and far less controversial ways of achieving that goal.

In contrast, Dieter Egli, a developmental biologist at Columbia University, says he is conducting his experiments "for research purposes." He wants to determine whether CRISPR can safely repair mutations in human embryos to prevent genetic diseases from being passed down for generations.

So far, Egli has stopped any modified embryos from developing beyond one day so he can study them.

"Right now we are not trying to make babies. None of these cells will go into the womb of a person," he says.

But if the approach is successful, Egli would likely allow edited embryos to develop further to continue his research.

In the lab, Egli is trying to fix one of the genetic defects that cause retinitis pigmentosa, an inherited form of blindness. If it works, the hope is that the approach could help blind people carrying the mutation have genetically related children whose vision is normal. 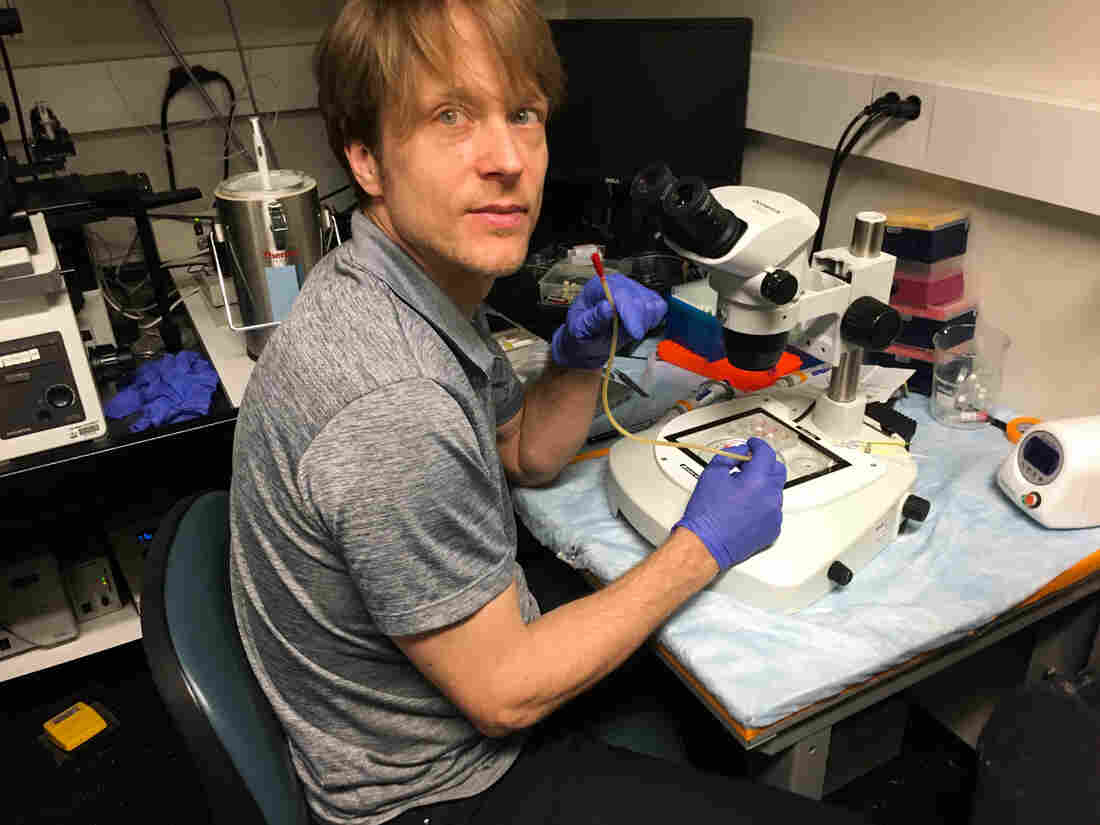 Egli is attempting to fix one of the genetic defects that cause retinitis pigmentosa, an inherited form of blindness. Rob Stein/NPR hide caption 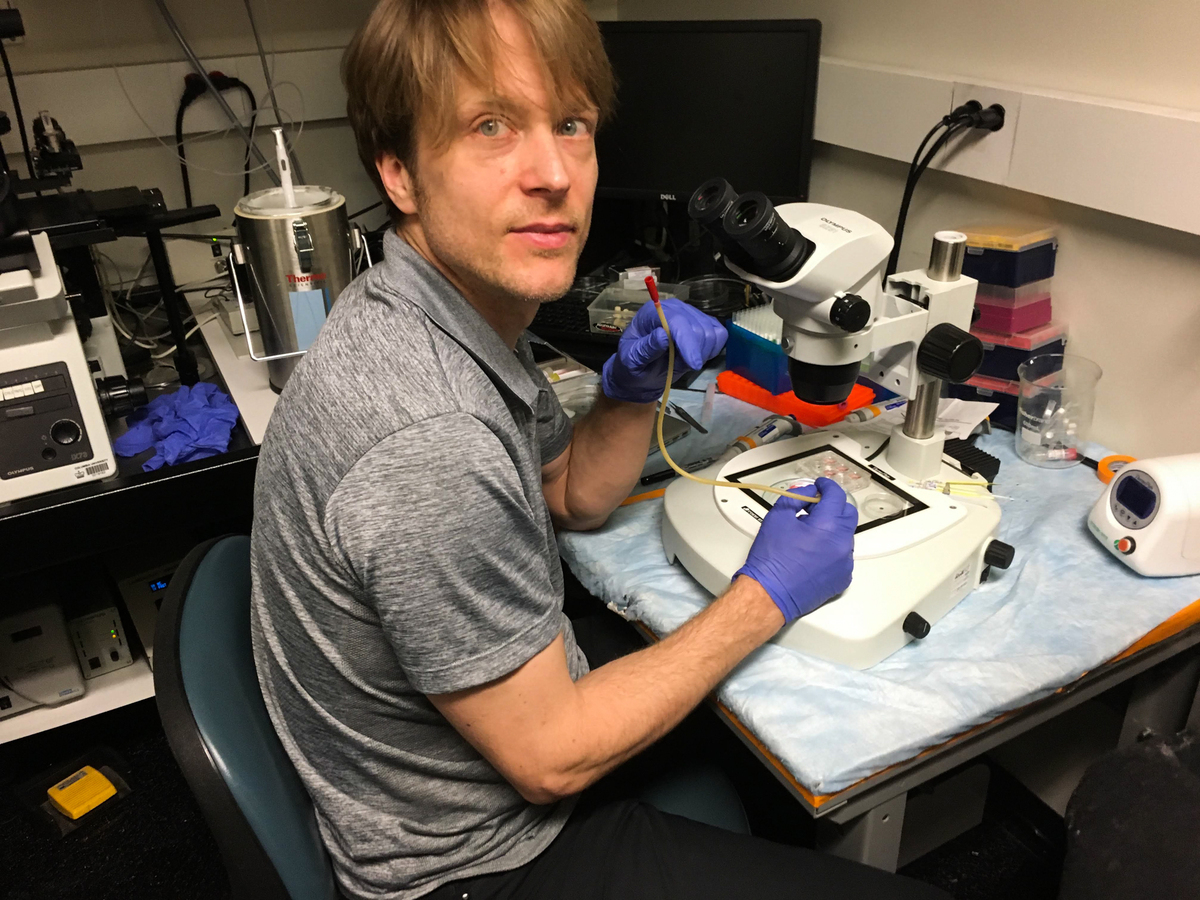 Egli is attempting to fix one of the genetic defects that cause retinitis pigmentosa, an inherited form of blindness.

But that is likely to take years of additional research to demonstrate that the technique is both effective and safe.

Nevertheless, even this kind of basic research is controversial.

"This is really disturbing," says Fyodor Urnov, associate director of the Altius Institute for Biomedical Sciences in Seattle. He worries such experiments could encourage more irresponsible scientists to misuse gene-editing technologies.

"As we've learned from the events in China, it is no longer a hypothetical that somebody will just go ahead and go rogue and do something dangerous, reckless, unethical," Urnov says.

Egli's research is reviewed in advance and overseen by a panel of other scientists and bioethicists at Columbia.

While the debate over research like Egli's continues, the U.S. National Academies of Science, Engineering and Medicine, the World Health Organization and others are trying to develop detailed standards for how scientists should safely and ethically edit human embryos.

Some bioethicists and scientists are calling for an explicit global moratorium on creating any more gene-edited babies. Others, like Urnov, would like to see a hiatus in even basic research.

Egli is well aware that his work may be controversial to some people. To try to be completely transparent about his experiments, Egli recently invited NPR to his laboratory for an exclusive look at his research.

"We can't just do the editing and then hope everything goes right and implant that into a womb. That's not responsible," Egli says. "We have to first do the basic research studies to see what happens. That's what we're doing here."

To show NPR what he is doing, early one morning Egli pushes open the door of a tiny windowless room on the sixth floor of one of Columbia's research towers in Upper Manhattan. The lab is jammed with scientific equipment, including two microscopes.

"I'm going to wear gloves because we want to keep things clean," he tells me.

To begin his experiment, Egli starts the long, slow process of thawing the frozen human eggs that were donated for research. After several hours of careful work and waiting, Egli has readied 15 eggs for his experiment.

After setting up a large microscope, Egli slides a round glass dish under the lens. The dish contains sperm from a blind man who carries the mutation that Egli is trying to fix. It also holds the CRISPR gene-editing tool.

"I'm starting with just one egg," he says as he gently places the first thawed egg into the dish.

"It's a beautiful cell," Egli says, pointing to a magnified image of the egg on a computer monitor. "I would say it's one of the most beautiful cells."

Egli maneuvers a tiny glass needle protruding into the side of the microscope dish toward one of the sperm. "So you can see a moving sperm over here," he says. "Now I'm picking it up. The sperm is in the needle. Now I'm dipping it in the CRISPR tool."

Once the sperm is inside the needle with the CRISPR gene-editing tool, Egli points the needle's tip at the egg. "Oh no!" he exclaims with a sigh. "The sperm is swimming away."

He searches the dish for the errant sperm.

"Oh, here it is," he says as he pulls the sperm back into the needle.

Next, Egli gently pierces the egg with the needle. "The membrane is broken — breached. There we go," Egli says as he injects the sperm and CRISPR tool into the egg. He breathes a sigh of relief. 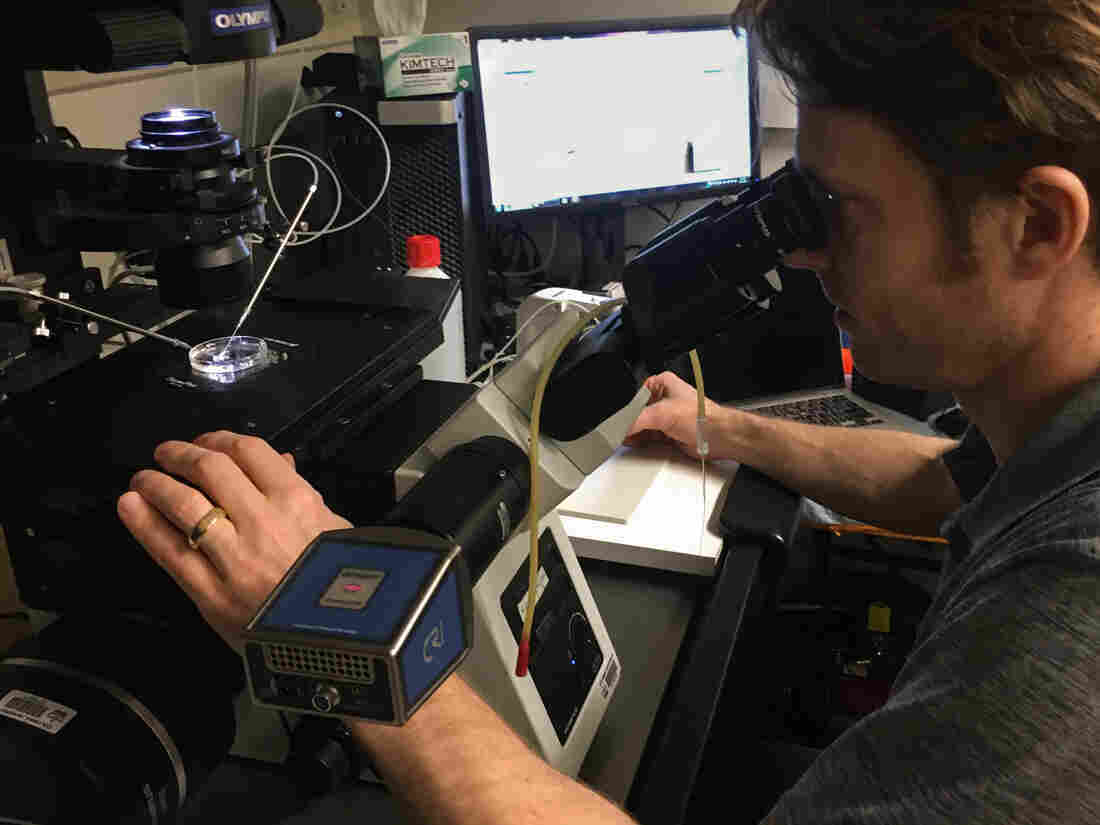 Egli injects a human egg with a sperm carrying a genetic mutation that causes blindness and a CRISPR tool he hopes will fix the mutation. Rob Stein/NPR hide caption 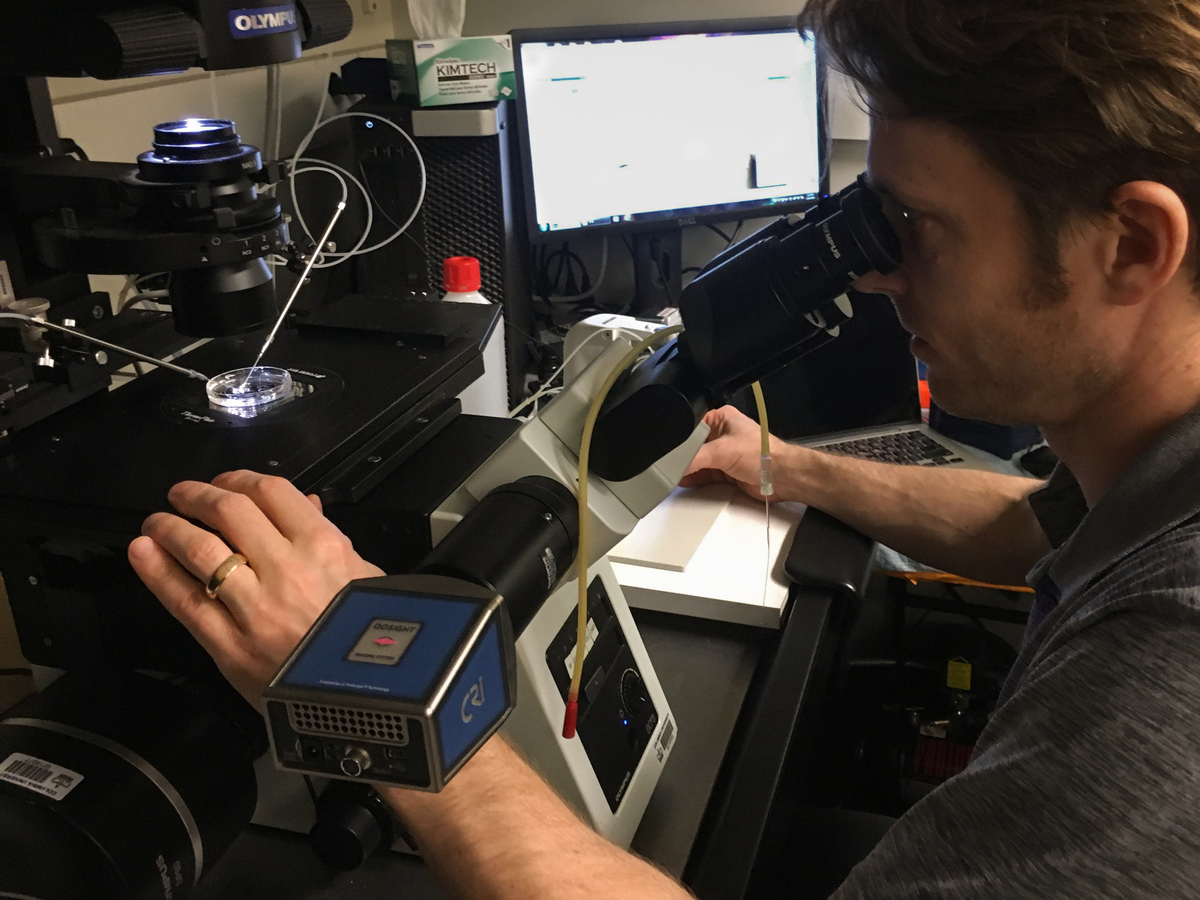 Egli injects a human egg with a sperm carrying a genetic mutation that causes blindness and a CRISPR tool he hopes will fix the mutation.

The idea is that CRISPR will slice out the mutation in the sperm, and the healthy DNA in the egg will serve as a template to repair the genetic mutation.

"Hopefully the CRISPR tool will cut the mutation and then the egg will replace that with a version that no longer causes disease," Egli says. "The genome from the mother would be rescuing the mutant genome from the father."

The approach was developed by scientists led by Shoukhrat Mitalipov of the Oregon Health & Science University in Portland.

Egli was initially skeptical of the Oregon group's claims that they had used CRISPR for the first time to repair a mutation in human embryos this way. Egli's research is aimed at trying to confirm that it works and how.

Mitalipov's group is also continuing to study the technique to see whether it can safely fix several genetic mutations in human embryos, including one of the breast cancer genes.

For the next two hours, Egli painstakingly fertilizes and edits one egg after another. He has to overcome a variety of technical complications. At one point, the tip of the fragile needle unexpectedly breaks off at a crucial moment.

"There we go," he says later, after the needle is replaced. "That one definitely worked. Beautiful."

This work may be beautiful to Egli, but it makes critics very nervous.

"Anyone with a connection to the Internet will be able to download the recipe to make a designer baby," Urnov says. "And then the question becomes: 'What's to prevent them from using it?' As we learned in the past year: apparently nothing."

So Urnov worries about any such research proceeding.

"We need to hit the pause button and keep it pressed until we understand how do we proceed in a way that minimizes the risk of people going rogue," Urnov says.

Urnov and others argue society needs a much broader debate about whether there is a truly a compelling reason to ever try to make any more gene-edited babies. There are many other ways to prevent genetic diseases, they note.

"If we've learned anything from what's happened in China, it's that the urge to race ahead pushes science to shoot first and ask questions later," says J. Benjamin Hurlbut, an associate professor of biology and society at Arizona State University. "But this is a domain where we should be asking questions first. And maybe never shooting. What's the rush?"

That's especially true when the prospect of creating gene-edited babies raises so many fraught ethical questions, including fears that it could eventually lead to the creation of "designer babies," critics say.

"We don't need to be mucking around with the genes of future children," says Marcy Darnovsky, director of the Center for Genetics and Society, a watchdog group. "This could open the door to a world where people who were born genetically modified are thought to be superior to others, and we would have a society of people who are considered to be genetic haves and genetic have-nots."

But many other scientists and bioethicists disagree.

"This is valid research, and I think it's important research," says R. Alta Charo, a bioethicist at the University of Wisconsin, Madison. "It has value not only for the possible use in the future for some number of conditions that would involve a live birth, but it has value for basic understanding of embryology, basic understanding of development," Charo says. "Of course I think we should be doing that research. Why wouldn't you be doing that research?"

"Is there value in doing that kind of research? I think there is," agrees Jennifer Doudna, a biochemist at the University of California, Berkeley, who helped invent CRISPR. "Does it have to be carried out carefully and under the right regulatory guidelines? Of course. But I think there's value in doing research like that."

"I'd like to see the U.S. be involved and show leadership on how to do that responsibly rather than say we're not going to have a seat at the table," Doudna says.

Back in Egli's lab, it's now nearly 3 p.m., and he is wrapping up the day's experiments.

"OK, that's it. That's the last one," he says as he places back into storage the last of 14 eggs he managed to fertilize and hopefully edit. He will stop their development the next morning to see whether it worked.