Accessibility links
Massachusetts Opioid Lawsuit Contains Details On Purdue Pharma : Shots - Health News The Massachusetts attorney general alleges that the family behind Purdue Pharma knew that OxyContin was causing overdoses, yet continued to cash in. New documents in the case were released Thursday. 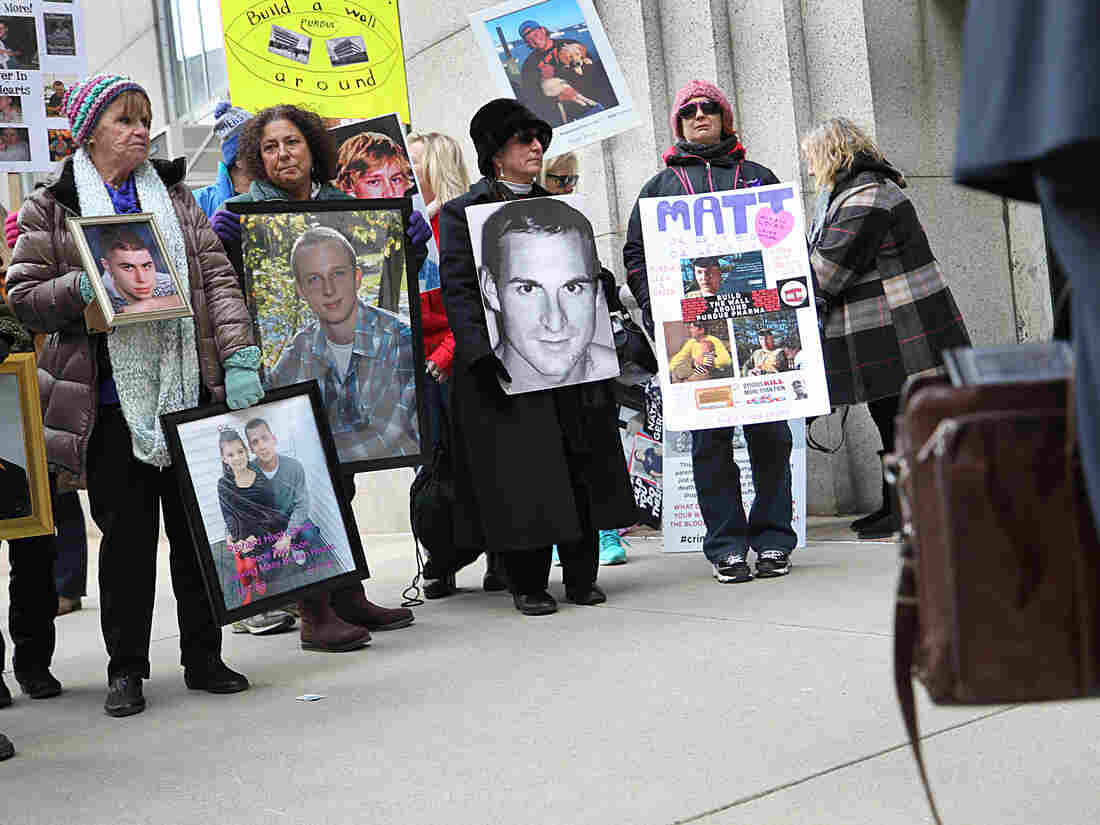 Families that lost loved ones to the opioid crisis protested outside Suffolk Superior Court in Boston as lawyers for Purdue Pharma entered the courthouse for a status update in the Massachusetts attorney general's suit against the company on Jan. 25. Suzanne Kreiter/Boston Globe via Getty Images hide caption 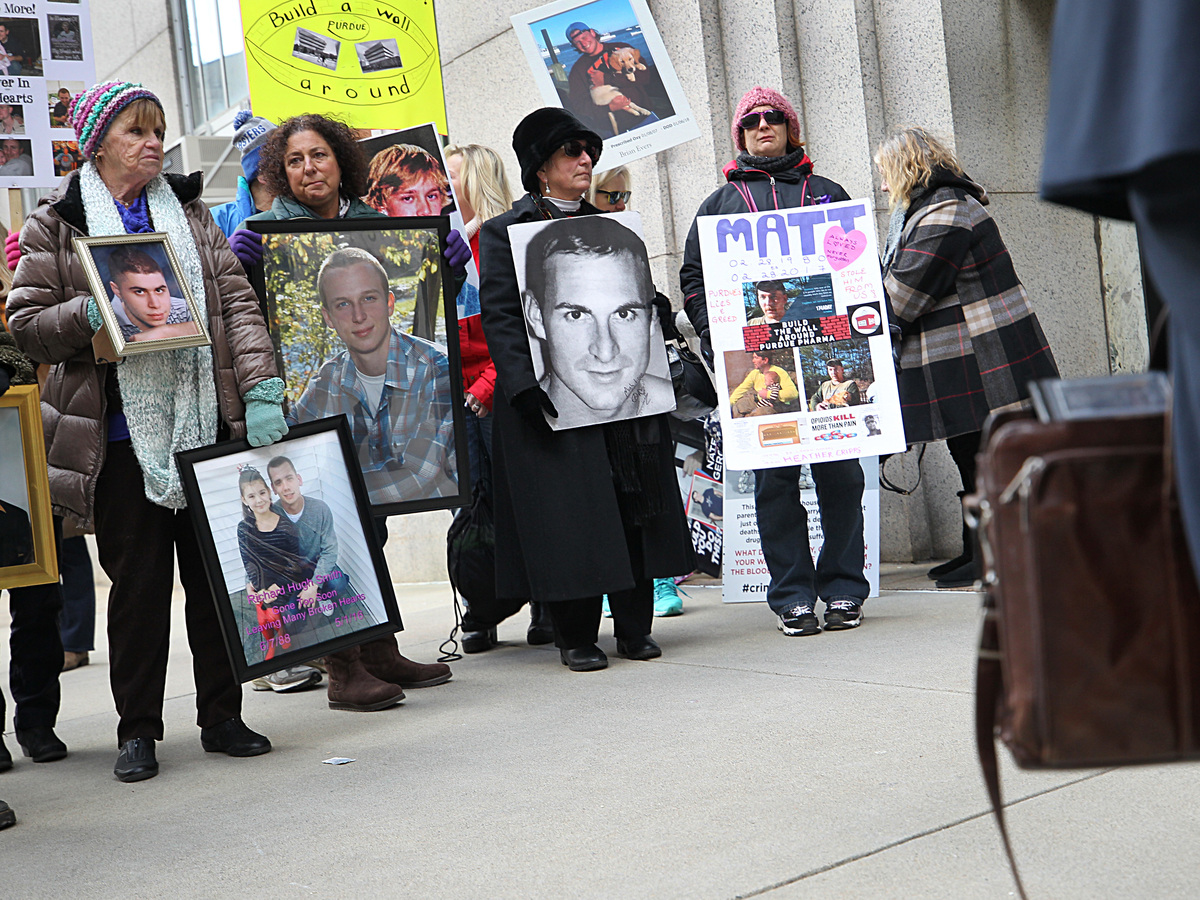 Families that lost loved ones to the opioid crisis protested outside Suffolk Superior Court in Boston as lawyers for Purdue Pharma entered the courthouse for a status update in the Massachusetts attorney general's suit against the company on Jan. 25.

The first nine months of 2013 started off as a banner year for the Sackler family, owners of the pharmaceutical company that produces OxyContin, the addictive opioid pain medication. Purdue Pharma paid the family $400 million from its profits during that time, claims a lawsuit filed by the Massachusetts attorney general.

However, when profits dropped in the fourth quarter, the family allegedly supported the company's intense push to increase sales representatives' visits to doctors and other prescribers.

Purdue had hired a consulting firm to help reps target "high-prescribing" doctors, including several in Massachusetts. One physician in a town south of Boston wrote an additional 167 prescriptions for OxyContin after sales representatives increased their visits, according to the latest version of the lawsuit filed Thursday in Suffolk County Superior Court in Boston.

The lawsuit claims Purdue paid members of the Sackler family more than $4 billion between 2008 and 2016. Eight members of the family who served on the board or as executives as well as several directors and officers with Purdue are named in the lawsuit. This is the first lawsuit among hundreds of others that were previously filed across the country to charge the Sacklers with profiting from the harm and death of people taking the company's opioids.

WBUR along with several other media outlets sued Purdue Pharma to force the release of previously redacted information that was filed in the Massachusetts Superior Court case. When a judge ordered the records to be released with few, if any, redactions this week, Purdue filed two appeals and lost.

Read the documents here or below:

The complaint filed by Massachusetts Attorney General Maura Healey says that former Purdue Pharma CEO Richard Sackler allegedly suggested the family sell the company or, if they weren't able to find a buyer, to milk the drugmaker's profits and "distribute more free cash flow" to themselves.

That was in 2008, one year after Purdue pleaded guilty to a felony and agreed to stop misrepresenting the addictive potential of its highly profitable painkiller, OxyContin.

The complaint says the Sacklers voted to pay themselves $250 million at a board meeting in June 2008. Another payment in September totaled $199 million.

The company continued to receive complaints about OxyContin similar to those that led to the 2007 guilty plea, according to unredacted documents filed in the case.

While the company settled lawsuits in 2009 totaling $2.7 million brought by family members of those who had been harmed by OxyContin throughout the country, the company amped up its marketing of the drug to physicians by spending $121.6 million on sales reps for the coming year. The Sacklers paid themselves $335 million that year.

The lawsuit claims Sackler family members directed efforts to boost sales. An attorney for the family and other board directors is challenging the authority to make that claim in Massachusetts. A motion on jurisdiction in the case hasn't been heard. That attorney hasn't responded to a request for comment on the most recent allegations.

Purdue Pharma, in a statement, said the complaint filed by Healey is "part of a continuing effort to single out Purdue, blame it for the entire opioid crisis, and try the case in the court of public opinion rather than the justice system."

Purdue went on to charge Healey with attempting to "vilify" Purdue in a complaint "riddled with demonstrably inaccurate allegations." Purdue said it has more than 65 initiatives aimed at reducing the misuse of prescription opioids. The company says Healey fails to acknowledge that most opioid overdose deaths currently are the result of fentanyl.

Purdue fought the release of many sections of the 274-page complaint. Attorneys for the company said at a hearing on Jan. 25 that they had agreed to release much more information in Massachusetts than has been cleared by a judge overseeing hundreds of cases consolidated in Ohio. Purdue filed both state and federal appeals this week to block release of the compensation figures and other information about Purdue's plan to expand into drugs to treat opioid addiction.

The attorney general's complaint says that in a ploy to distance themselves from the emerging statistics and studies that showed OxyContin's addictive characteristics, the Sacklers approved public marketing plans that labeled people hurt by opioids as "junkies" and "criminals."

Richard Sackler allegedly wrote that Purdue should "hammer" them in every way possible.

While Purdue Pharma publicly denied its opioids were addictive, internally company officials were acknowledging it and devising a plan to profit off them even more, the complaint states.

Kathe Sackler, a board member, pitched Project Tango, a secret plan to grow Purdue beyond providing painkillers by also providing a drug, Suboxone, to treat those addicted.

"Addictive opioids and opioid addiction are 'naturally linked,' " she allegedly wrote in September 2014.

According to the lawsuit, Purdue staff wrote: "It is an attractive market. Large unmet need for vulnerable, underserved and stigmatized patient population suffering from substance abuse, dependence and addiction."

They predicted that 40-60 percent of the patients buying Suboxone for the first time would relapse and have to take it again, which meant more revenue.

Purdue never went through with it, but Healey contends this and other internal documents show the family's greed and disregard for the welfare of patients.