Accessibility links
Trump Plan To End HIV Spread By 2030 Faces Obstacles : Shots - Health News The Trump administration has a plan to end the spread of HIV in the U.S. in 10 years. HIV/AIDS advocates say it's feasible but that the administration's actions on health run counter to the goal. 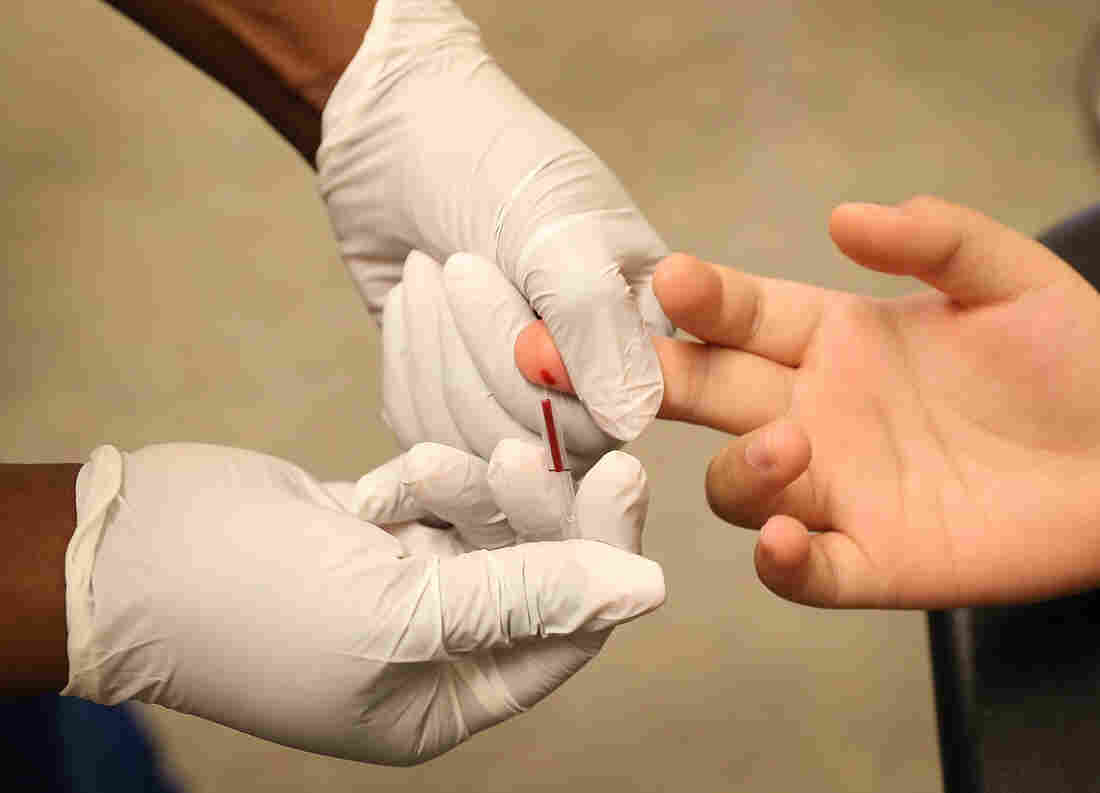 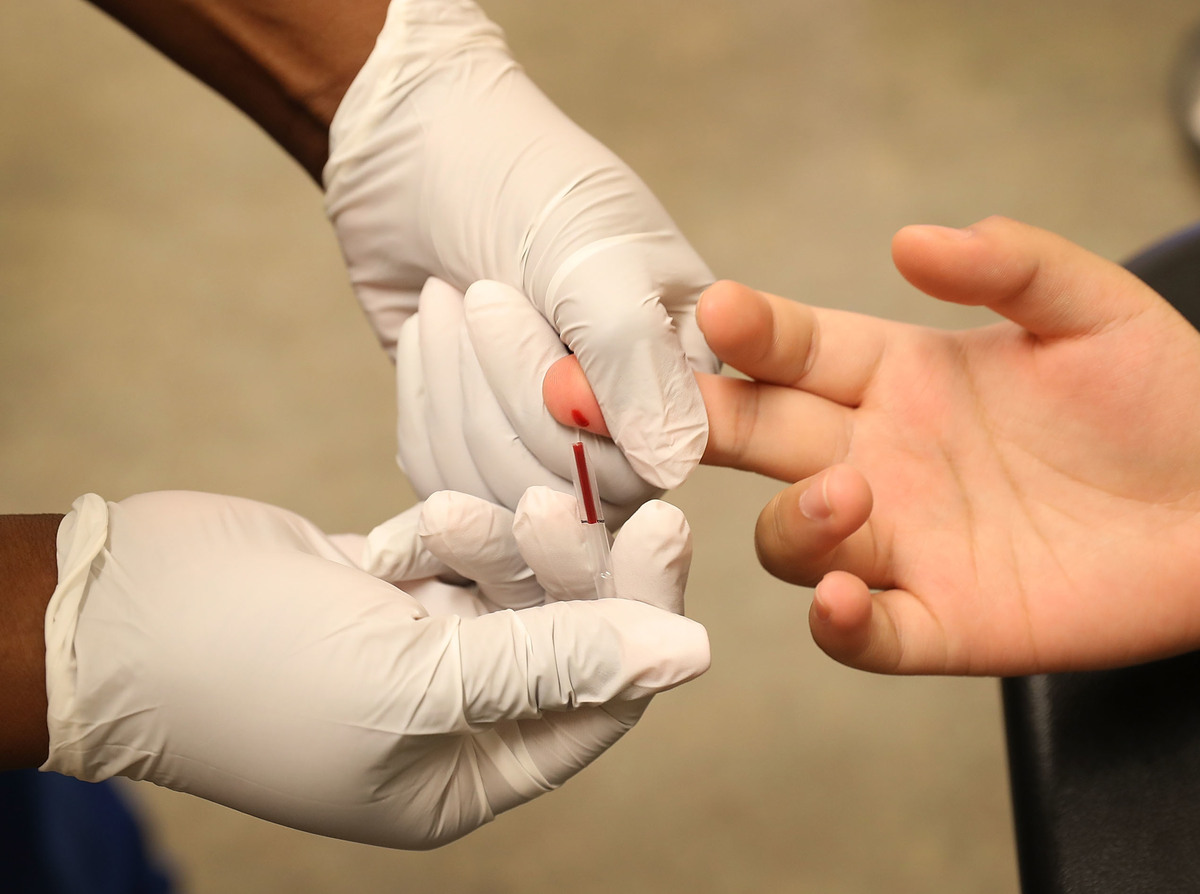 More testing for HIV infection is one of the steps needed to halt the spread of the virus.

Trump administration health officials are spelling out their ambitious plan to stop the spread of HIV in the U.S. within the next 10 years.

The plan would target 48 counties where the rate of HIV spread is the highest, along with Washington, D.C., and San Juan, Puerto Rico. Seven states with high rates of HIV in rural areas would also be targeted, including Oklahoma, Missouri, Kentucky, Arkansas, Alabama, South Carolina and Mississippi.

The release of plan details follows a brief mention of the goal by President Trump in his State of the Union address Tuesday evening.

"My budget will ask Democrats and Republicans to make the needed commitment to eliminate the HIV epidemic in the United States within 10 years. Together, we will defeat AIDS in America," Trump said.

PrEP Campaign Aims To Block HIV Infection And Save Lives In D.C.

"We have the tools available to end the HIV epidemic, and most infections are now highly concentrated in certain geographic hotspots," Azar said in a statement. "More than 50 percent of new HIV diagnoses in 2016 and 2017 occurred in 48 counties, Washington, D.C., and San Juan, Puerto Rico."

The plan would "[increase] investments" in these hot spots through existing programs like the Ryan White HIV/AIDS Program, which provides care to low-income people who are uninsured. The federal government would provide funds to create a local "HIV HealthForce" in these targeted areas to expand HIV prevention and treatment.

Several HIV/AIDS advocates say that the goal is achievable, but only if the administration reverses course in several major areas of health care policy, including efforts to weaken the Affordable Care Act, cut funding for Planned Parenthood and limit LGBTQ and immigrant rights. The initiative's fate will depend on Congress, which will decide whether to fund the new proposal and, if so, by how much.

In a press call Wednesday, Dr. Brett Giroir, assistant secretary for health, declined to specify how much money the president would request from Congress for the program. Those details will be included in the administration's overall budget request, he said.

The new plan echoes "targeted" prevention campaigns of decades past. These have focused on people at highest risk of HIV, such as men who have sex with men, injection-drug users and commercial sex workers. Or they have concentrated resources on specific geographic areas, where the spread of HIV was greatest.

While these efforts have slowed the spread of HIV to an extent, in 2016 there were still more than 40,000 new HIV infections in the U.S., according to the Centers for Disease Control and Prevention. The rate of new infections has hovered around the 40,000 mark, more or less, for years despite the targeted programs.

"What is new about this is the laser focus of multi-agencies synergizing together on those areas," Dr. Anthony Fauci of the National Institutes of Health said on the press call. "This is the first time we have had a multiagency approach where the individual agencies will be working very closely together."

There's a consensus among HIV/AIDS advocates and government officials that ending HIV's spread is theoretically possible thanks to several developments in recent years.

First, there was the discovery that people with HIV/AIDS who are properly treated not only live much longer, healthier lives but also have undetectable levels of the virus circulating in the body. That means they essentially can't pass the virus to others. Some 90 percent of new HIV infections can be attributed to people who either don't know they are infected or aren't getting treatment, or both.

Second, people who are at high risk of getting HIV — including men who have sex with men, commercial sex workers and people who use drugs intravenously — can protect themselves from HIV by taking an anti-HIV pill once a day. It's called pre-exposure prophylaxis, or PrEP.

Also, studies have shown that providing injection-drug users with clean equipment can dramatically reduce the risk of HIV spread. Condoms can too.

House Speaker Nancy Pelosi, D-Calif., who has long been an advocate for people with HIV/AIDS, called the proposal "interesting" in a statement Wednesday. But she also said it runs counter to actions by the administration so far.

"If he is serious about ending the HIV/AIDS crisis, he must end his assault on health care and the dignity of the LGBTQ community," Pelosi said of Trump.

Greg Millett of the Foundation for AIDS Research called the plan "visionary." But he also said that "as laudable as it is that they are announcing this initiative, we need to be watchful on the administration to make sure that they're not doing anything that's cross-purposes at reaching the goals with this initiative and need to be very vocal about that."

Millett and others pointed to changes in Medicaid's structure that could allow states to cut back on funding for HIV/AIDS, limits in the Medicare drug program on what drugs are covered, changes to the Affordable Care Act that have resulted in more people lacking insurance and the high price of HIV/AIDS drugs.

Indeed, the cost of the administration's new program could be quite substantial. PrEP alone currently has a price of about $1,600 a month, according to Medicaid's National Average Drug Acquisition Cost database.

About 1.2 million people are at risk for HIV and would benefit from PrEP, the CDC says, but only 10 percent of those people are currently receiving it. Most insurance policies cover the cost, and Medicaid pays for it in several states. Federal health centers serving low-income Americans also provide PrEP.

Then there's the cost of treating people who are already infected with HIV. About two-thirds of those who are infected have been diagnosed, according to HHS. But only about half are getting proper treatment that suppresses the virus to undetectable levels.

Carl Schmid, deputy executive director of the AIDS Institute and a co-chair of the Presidential Advisory Council on HIV/AIDS, says that while it may appear expensive to extend PrEP to large populations, over the long term there will be huge cost savings from preventing the expense of lifelong treatment for HIV/AIDS.

He said that many cities that already have comprehensive programs, like New York, San Francisco and Washington, D.C., among others, are already seeing improvements.

New York City Health Commissioner Dr. Oxiris Barbot said while the president's plan is "encouraging," it is "difficult to reconcile this statement with his administration's systematic assault on the HIV community, including undermining access to affordable health insurance and HIV drugs, cutting funds for HIV research and attacking LGBTQ+ people."

On the press call, officials notably stressed their commitment to provide transgender people care that is free from discrimination.

"Stigma is the enemy of public health," said Dr. Robert Redfield, the CDC's director. "The transgender population, in particular, needs to be reached out to, and we need to be able to address, in a comprehensive way, how to destigmatize HIV infection."

NIH's Fauci said the new plan "would treat transgender people like we treat any other patient, giving them the respect that they deserve, whether they are infected or at risk of infection, and that's a commitment that we all have very firmly."