Accessibility links
Insulin 'Pill' Could Replace A Shot Someday, Researchers Say : Shots - Health News A lot of vaccines and some medications need to be delivered by injection. Two groups of researchers are designing ways of delivering these medications by putting them in pill form. 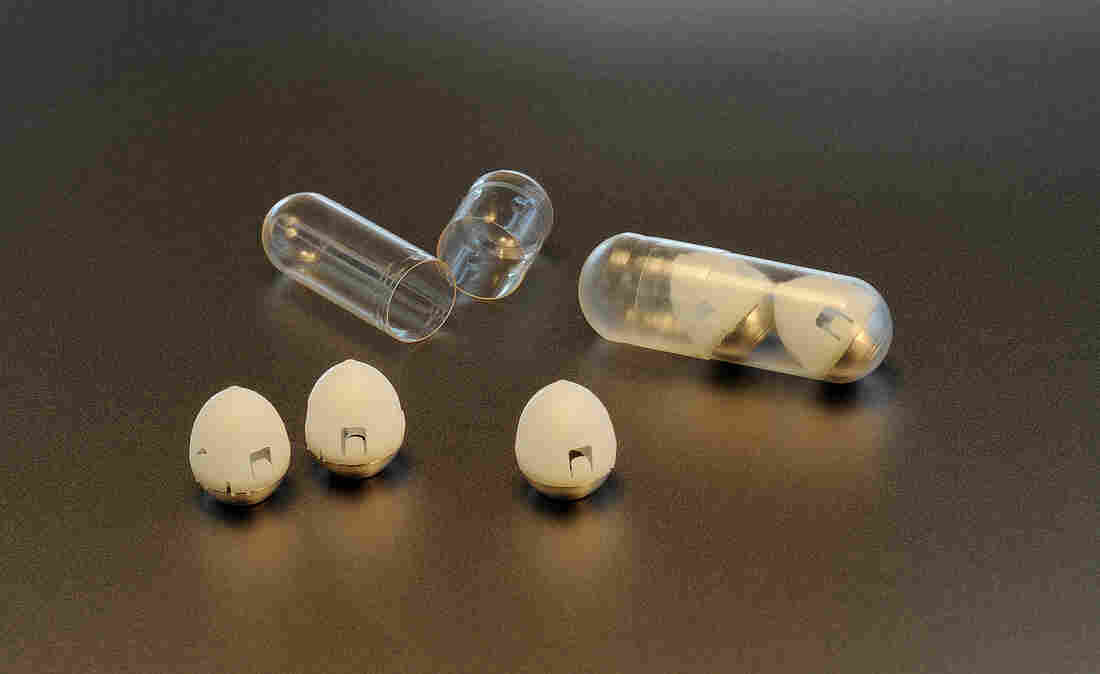 A team of researchers in Boston has developed an insulin-delivery system that injects the medicine directly into the stomach wall, which is painless. Felice Frankel/MIT hide caption 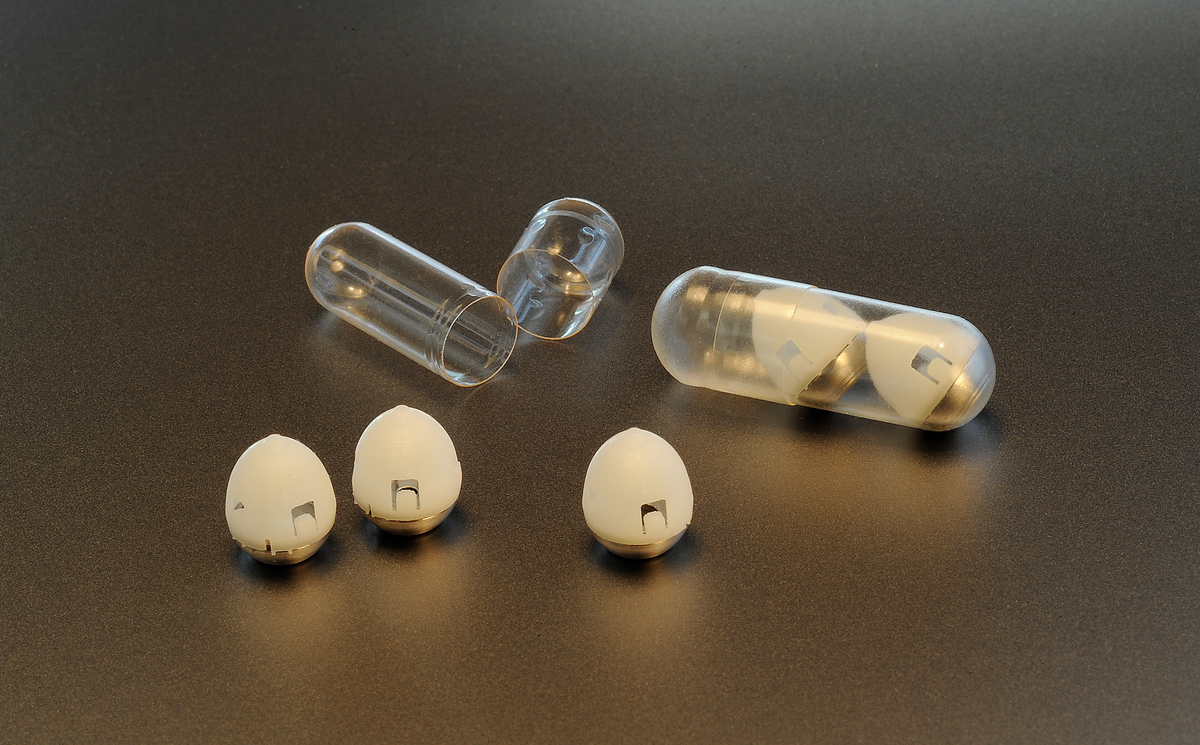 A team of researchers in Boston has developed an insulin-delivery system that injects the medicine directly into the stomach wall, which is painless.

Many vaccines and some medicines, such as insulin, have to be delivered by injection. That's a pain, both for patients and for health care providers. But two groups of researchers are trying to put some of these medications in pill form to avoid the needle.

One team of scientists, from MIT's Koch Institute for Integrative Cancer Research and Harvard's Brigham and Women's Hospital, developed a system to deliver insulin that actually still uses a needle — but is so small you can swallow it and the injection doesn't hurt.

They built a pea-size device containing a spring that ejects a tiny dart of solid insulin into the wall of the stomach, says gastroenterologist Carlo Giovanni Traverso, an associate physician at Brigham and Women's Hospital.

"We chose the stomach as the site of delivery because we recognized that the stomach is a thick and robust part of the GI tract," Traverso says.

Once the device gets into the stomach, the humidity there allows the spring to launch the insulin dart.

So far so good, but Traverso says there was a problem the team had to overcome: "How do we get these devices to self-orient such that the end that is doing the injecting part is in direct contact with a tissue?"

To get it to roll into the right position all on its own, they turned to nature.

"Leopard tortoises happened to have evolved a way of doing this," Traverso says. The shape of the tortoise shell helps the turtle flip over if it happens to wind up on its back.

And there was another source of inspiration: Weebles, those egg-shape toys that wobble but don't fall down. 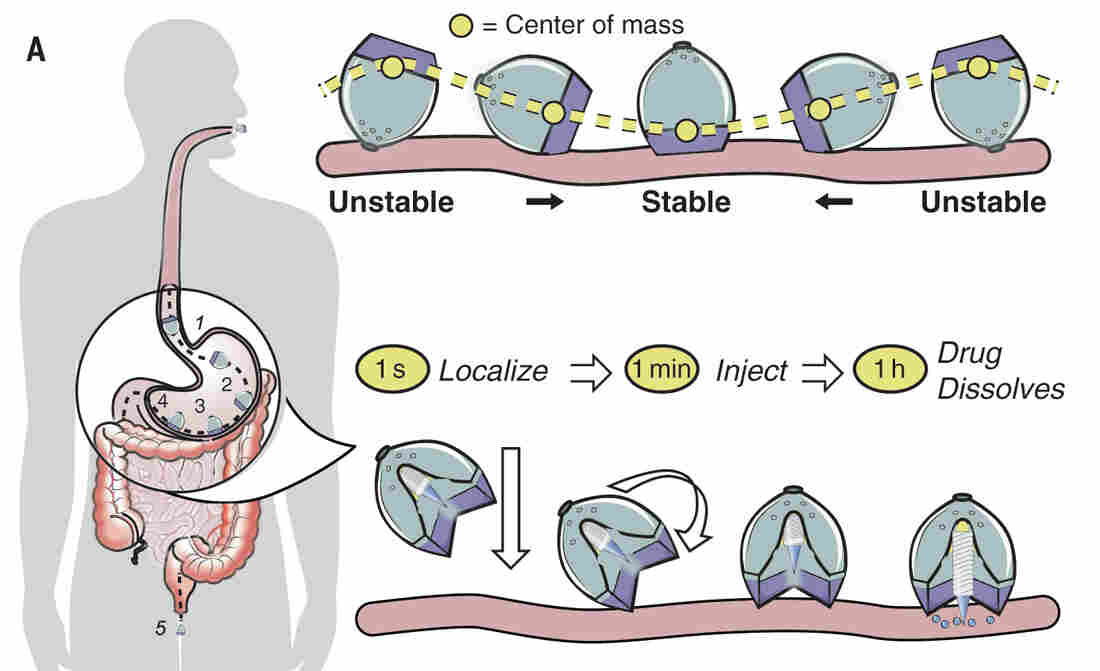 The self-righting capsule orients itself inside the stomach and ejects a tiny dart of solid insulin that's about a quarter of an inch long. Ania Hupalowska, Alex Abramson, Muhammad Mahdi Karim/Science hide caption 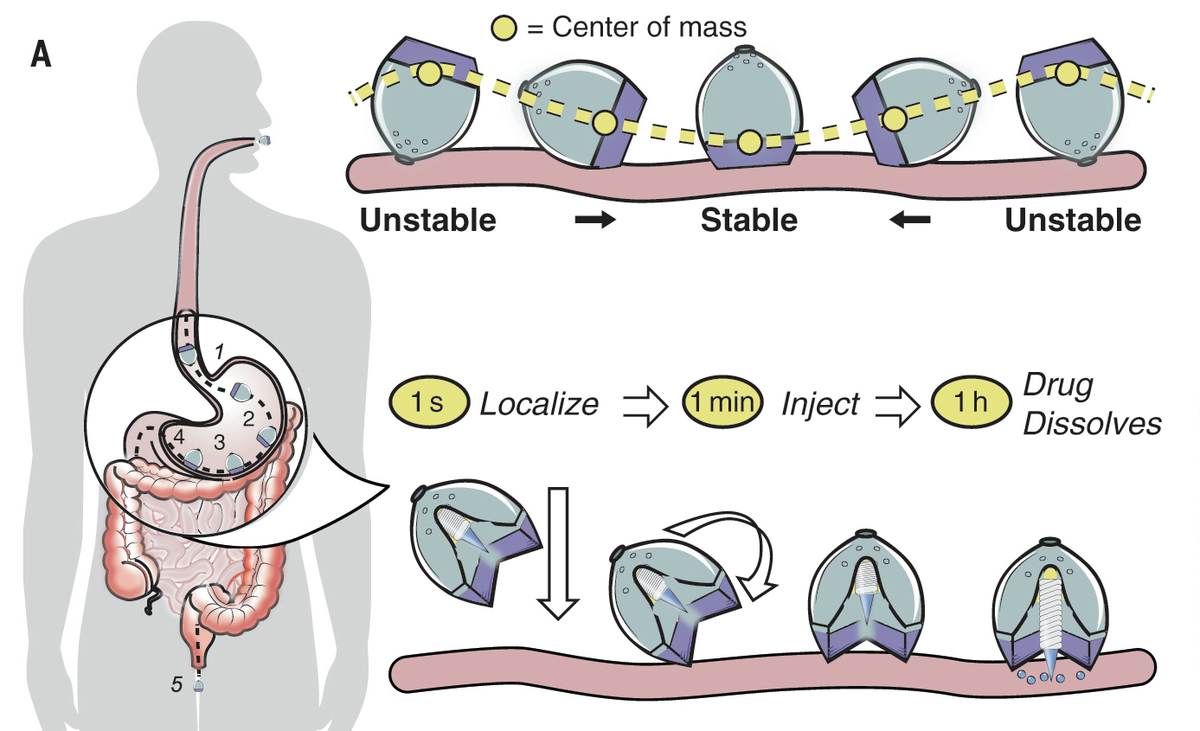 The self-righting capsule orients itself inside the stomach and ejects a tiny dart of solid insulin that's about a quarter of an inch long.

As the researchers report in the journal Science, they've tested the device on pigs, and it can deliver a therapeutic dose of insulin provided the pig has an empty stomach.

Traverso and his colleagues have been working with the global health care company Novo Nordisk to ready the device for human testing. He has received consulting fees from the company and is a co-inventor on patent applications describing oral biologic delivery. Traverso hopes their device will be ready for human tests in a few years.

On the other side of the U.S., nanoengineer Ronnie Fang of the University of California, San Diego and his colleagues have a different delivery system. Theirs is a kind of ingestible microrocket, about the size of a grain of sand, that is designed to zip past the stomach and into the small intestine.

"It actually propels [itself] using bubbles in a reaction of magnesium with biological fluids," Fang says.

The rocket has a coating that protects its payload from the acidic and enzyme-filled environment of the stomach. Once the rocket enters the small intestine, the change in acidity causes the coating to dissolve and lets the rocket stick to the intestinal wall to release its payload, in this case a vaccine protein.

Much like Traverso's design was inspired by the shape of a tortoise shell, the bubble-propelled microrocket travels like a bacterium.

As Fang and his colleagues report in Nano Letters, their delivery system works in mice, but human testing is probably many years off.