Accessibility links
Women Should Consider Truvada For PrEP Too, HIV Prevention Advocates Say : Shots - Health News After gay and bisexual men, black women are the group at highest risk for HIV transmission. Here's how women are teaching each other about the most effective ways to prevent infection. 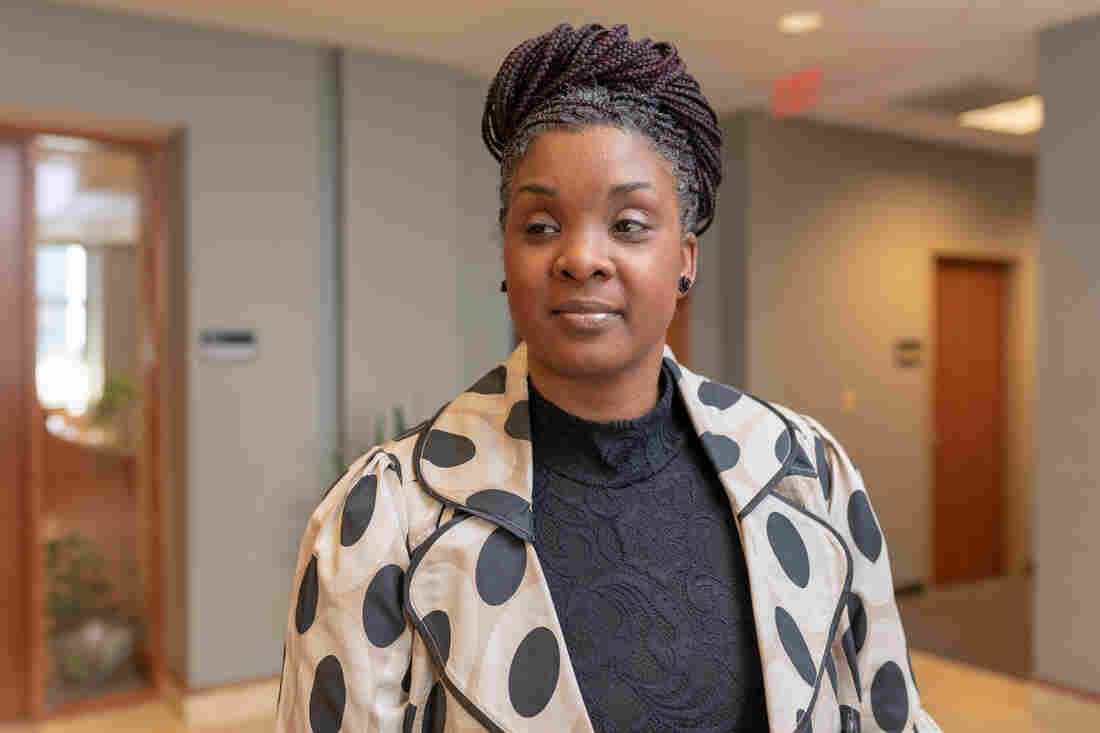 Dr. Rasheeta Chandler is a researcher at Emory University, who specializes in women's sexual and reproductive health. In a small recent study, Chandler learned that 67 percent of college-age black women had never heard of the HIV prevention drug PrEP. Lynsey Weatherspoon for NPR hide caption 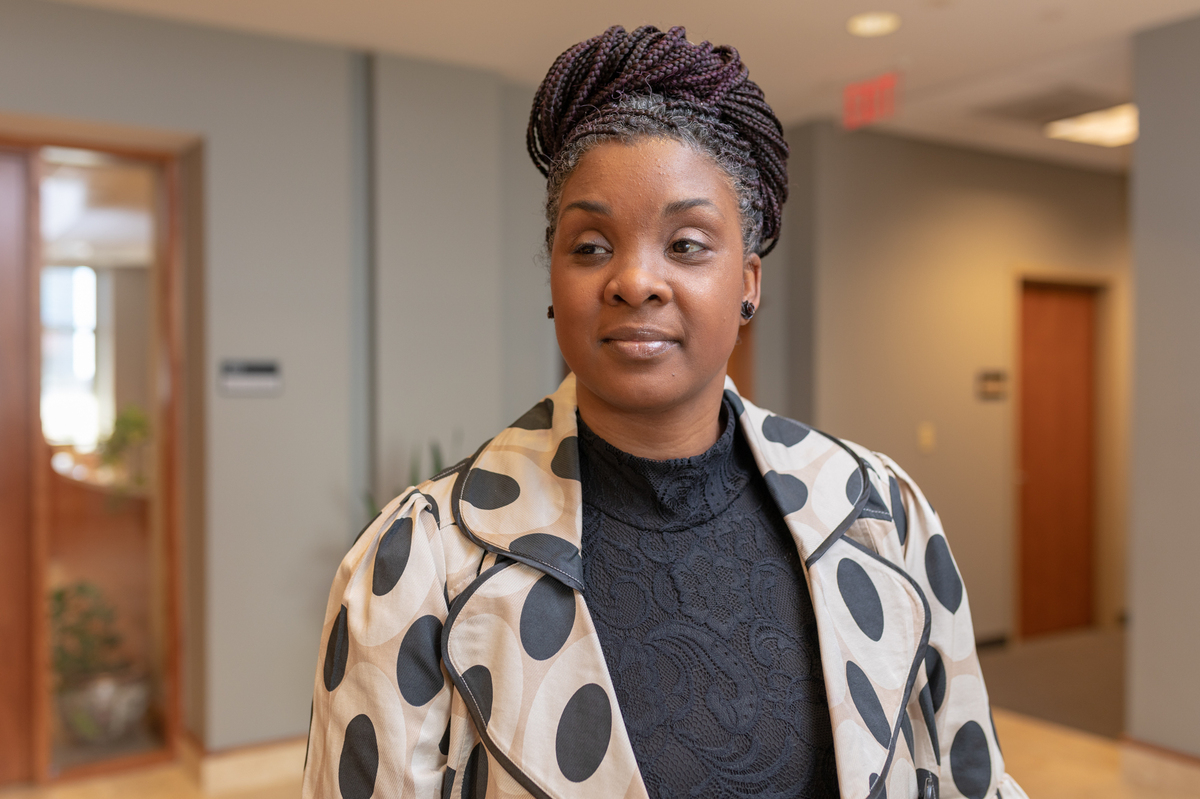 Dr. Rasheeta Chandler is a researcher at Emory University, who specializes in women's sexual and reproductive health. In a small recent study, Chandler learned that 67 percent of college-age black women had never heard of the HIV prevention drug PrEP.

In 2013, not quite a year after the Food and Drug Administration approved the drug Truvada for HIV prevention, a coalition of 50 experts in HIV and women's health called on U.S. public health agencies to promote the pill and its approach, called pre-exposure prophylaxis, or PrEP, explicitly to women.

"No one until recently spent time talking about PrEP for women," says Dr. Dawn K. Smith, biomedical interventions implementation officer at the Centers for Disease Control and Prevention. "I think we need to have a clearer message: If you're at risk for HIV, you should consider this. It can work for you."

And women are at risk, especially black women. After gay men and transgender women of any race, who have the highest risk of infection, black women are the group most vulnerable to HIV, according to the CDC. And while PrEP has been proven to reduce new HIV diagnoses when used consistently, it's mostly white gay men who have benefited so far.

So as President Trump pledged this week to reduce HIV rates in the U.S. by targeting HIV transmission hotspots, black women say that their communities ought to be a focus.

"The unequal roll-out of PrEP to women must be resolved in the new plan," says Leisha McKinley-Beach, a national HIV/AIDS consultant and a member of the the coalition that argued for PrEP for women in 2013. McKinley-Beach says she has been frustrated to see little change in the rates of HIV transmission among blacks, both men and women, while rates among white men dropped by 10 percent since 2011. "We want the same outcomes for our communities," she says.

No matter what comes of the Trump administration's plans, public health researchers and grassroots advocates are already tackling the problem. McKinley-Beach works with a group of black women in Atlanta, where some neighborhoods have high HIV rates, raising awareness among women that PrEP is for them too. Nationally, groups like the Black AIDS Institute and the Black Women's Health Imperative, have started campaigns to reach women. And they're using different tactics than those that work to reach gay men.

About 1.1 million Americans are at high risk for HIV and could benefit from PrEP, according to the CDC. Around half of those are black men and women, who have the highest HIV risk burden of any race. But only 1 percent of PrEP prescriptions have gone to black people of any gender, according to data the CDC's Smith presented at an HIV conference in 2018. And only 10,000 women of any race were using the pill to prevent HIV.

The CDC suggests people consider PrEP if they have any of several risk factors for infection, including if they are in a relationship with someone who is HIV-positive or whose status they don't know, if they are in a relationship that's not mutually monogamous, are dating and having sex with more than one person, or don't use condoms consistently.

There's one more risk factor that often affects black women even if they have none of the others, explains Dr. David Malebranche, an HIV researcher at the Morehouse School of Medicine. Simply living in an HIV hotspot area, such as those that the president's plan aims to reach, can raise your odds of exposure. In Atlanta, for instance, there are some ZIP codes where the HIV rate is as high as 1.9 percent, while others are as low as 0.14 percent.

Black women make up 62 percent of all new HIV diagnoses among women—despite accounting for just 13 percent of women in the U.S. And yet, according to a study published in January, knowledge about PrEP among women is low, particularly for black and Latina women.

Perhaps this lack of knowledge stems from the fact that PrEP has been talked about almost solely in the context of gay men, "particularly white gay men," says Rasheeta Chandler, a researcher at Emory University specializing in women's sexual and reproductive health and an advance-practice nurse in HIV care.

Even she didn't connect the dots between the new HIV prevention pill and the women she was studying and treating until years after first hearing of Truvada. "I just filed it away as a new prevention effort that had a biomedical capability," she says.

Now it's the focus of her work.

In Chandler's most recent study presented at the Association of Nurses in AIDS Care Conference in 2018, two-thirds of the college-age black women she spoke to had never heard of PrEP. And while a chunk of them said they would probably "pass on the pill," 67 percent said there was a chance they might take PrEP in the future. 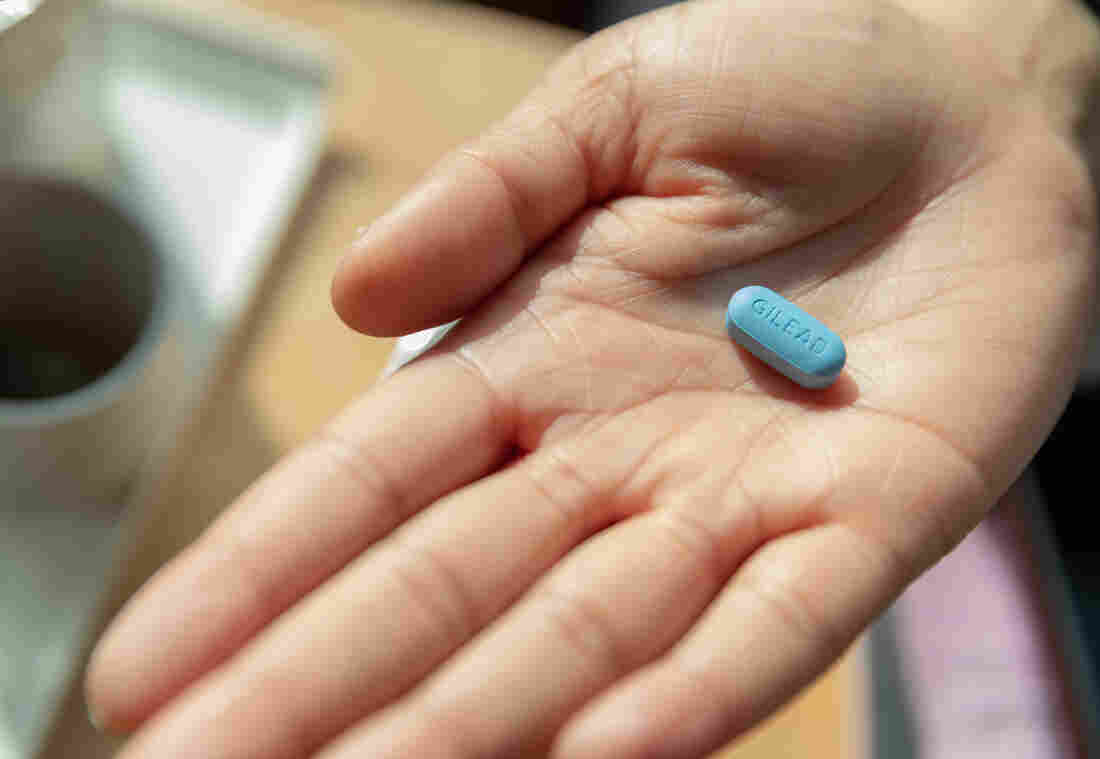 Brittany Williams, a doctoral candidate at the University of Georgia, started taking Truvada when she began dating a man living with HIV. Even though the relationship ended, she continues to take it. Lynsey Weatherspoon for NPR hide caption 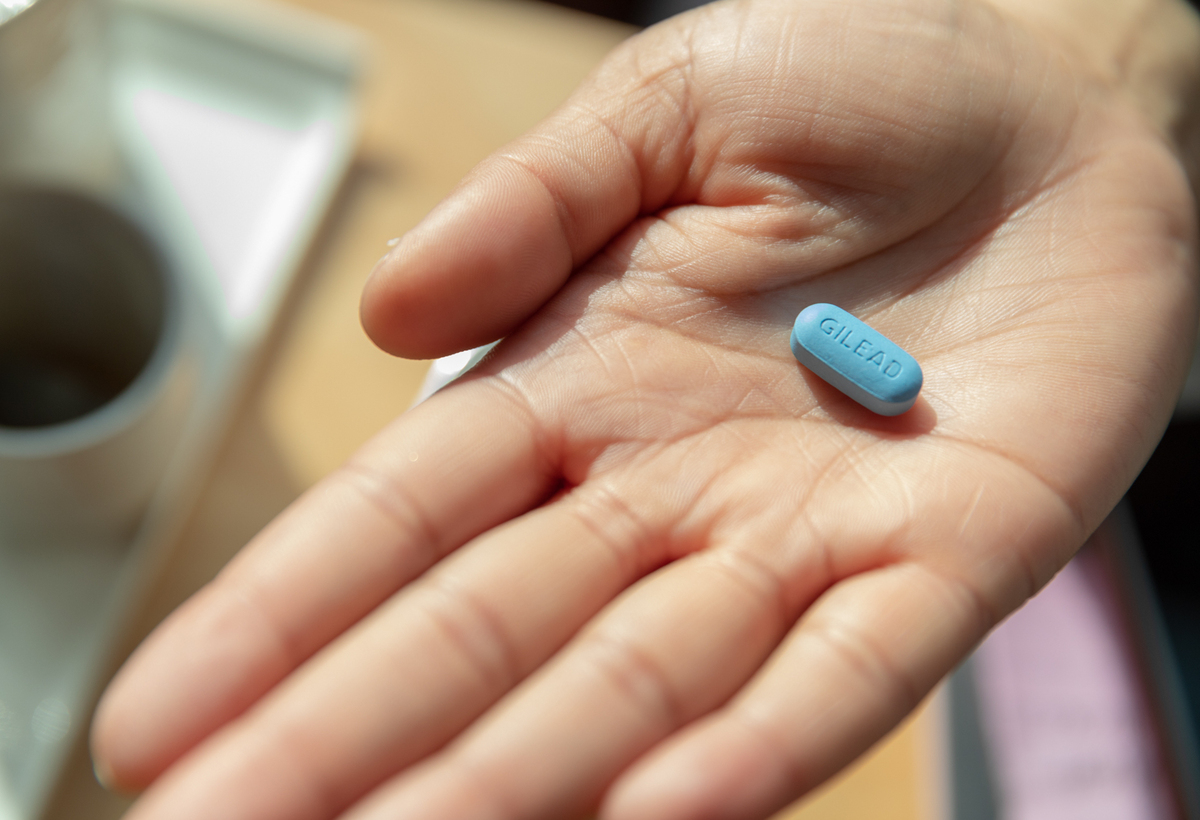 Brittany Williams, a doctoral candidate at the University of Georgia, started taking Truvada when she began dating a man living with HIV. Even though the relationship ended, she continues to take it.

If low rates of PrEP use continue among the women who could most benefit from it, it may undermine efforts to ease the HIV epidemic for those women, says Rachel Jones, an associate professor in the School of Nursing at Northeastern University.

"If we don't adequately promote HIV prevention in black women, we risk seeing HIV infection boomerang in this population," she says. "We have got to stop the epidemic in men. We've got to stop it in [gay and bisexual men]. But we cannot forget about HIV infection in women."

At a conference room in an Atlanta hotel recently, a group of black women gathered to talk to each other about how to protect themselves from HIV.

The event, put on by local nonprofit SisterLove is just one local effort, led by black women for black women, to spread the word about PrEP. Another group, called Atlanta Black Women Leaders on PrEP, which McKinley-Beach is part of, is also mobilizing to raise women's awareness of PrEP. McKinley-Beach is creating palm cards—small cards about the size of a business card that women can keep in their purses—listing the handful of Atlanta clinics that offer PrEP to women.

Later in 2019, SisterLove plans to open a clinic dedicated to prescribing PrEP to women, particularly black women. When it does so, it will significantly increase women's access to PrEP in the city.

Meanwhile, the local Planned Parenthood office is looking into offering PrEP to women in Atlanta. And all these efforts are being amplified by national efforts by Planned Parenthood and other public health nonprofits to get PrEP in the hands of women.

This all comes as the nation's preeminent organization for health prevention efforts, the U.S. Preventive Services Task Force, recently endorsed PrEP in a draft recommendation as a recommended HIV prevention method for all people of any gender at high risk for HIV.

"The momentum is building," McKinley-Beach says. "It's getting birthed out of a need."

If more Atlanta clinics offering PrEP to women were around a year ago, Brittany M. Williams' experience might have been different. Williams, 28, a doctoral candidate at the University of Georgia, heard there was a pill that could prevent HIV from her gay black male friends years ago. But at the time, she was more focused on her general health.

"If you look at [all the health conditions] that African Americans can have, that's what my family history looks like," she says, listing off diabetes and hypertension among other conditions. 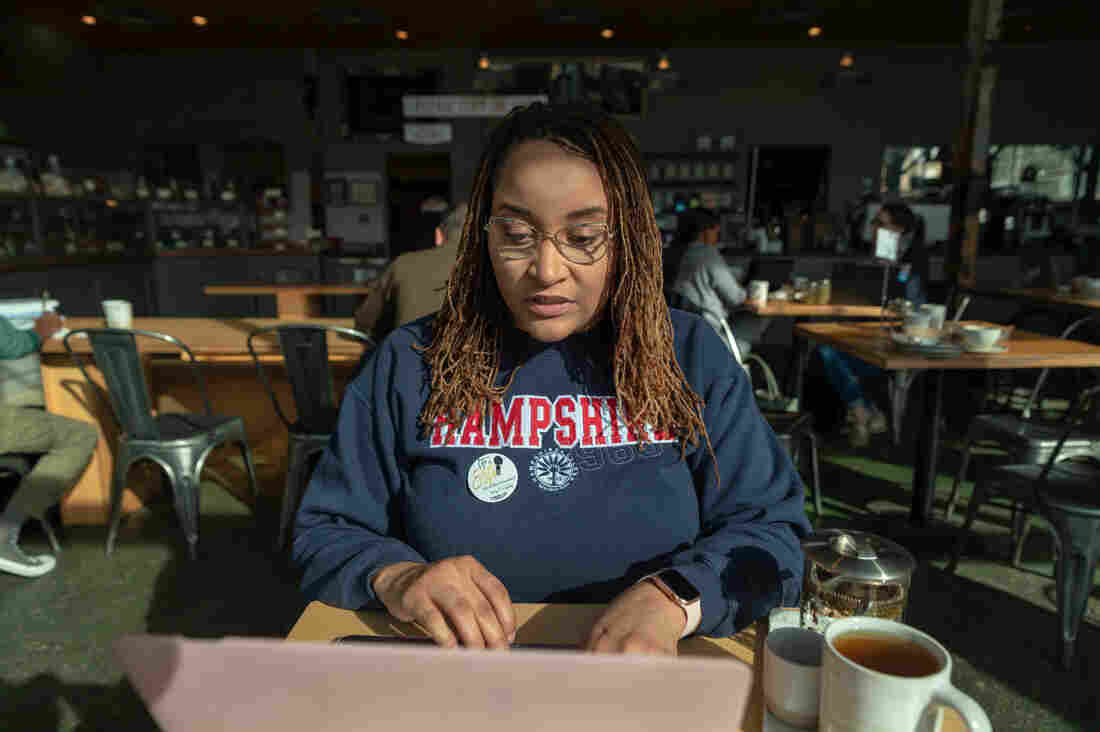 Williams says she knew friends who had acquired HIV the first time they'd had sex. Her favorite uncle also died of AIDS-related complications. Both of these experiences influenced her decision to take PrEP. Lynsey Weatherspoon for NPR hide caption 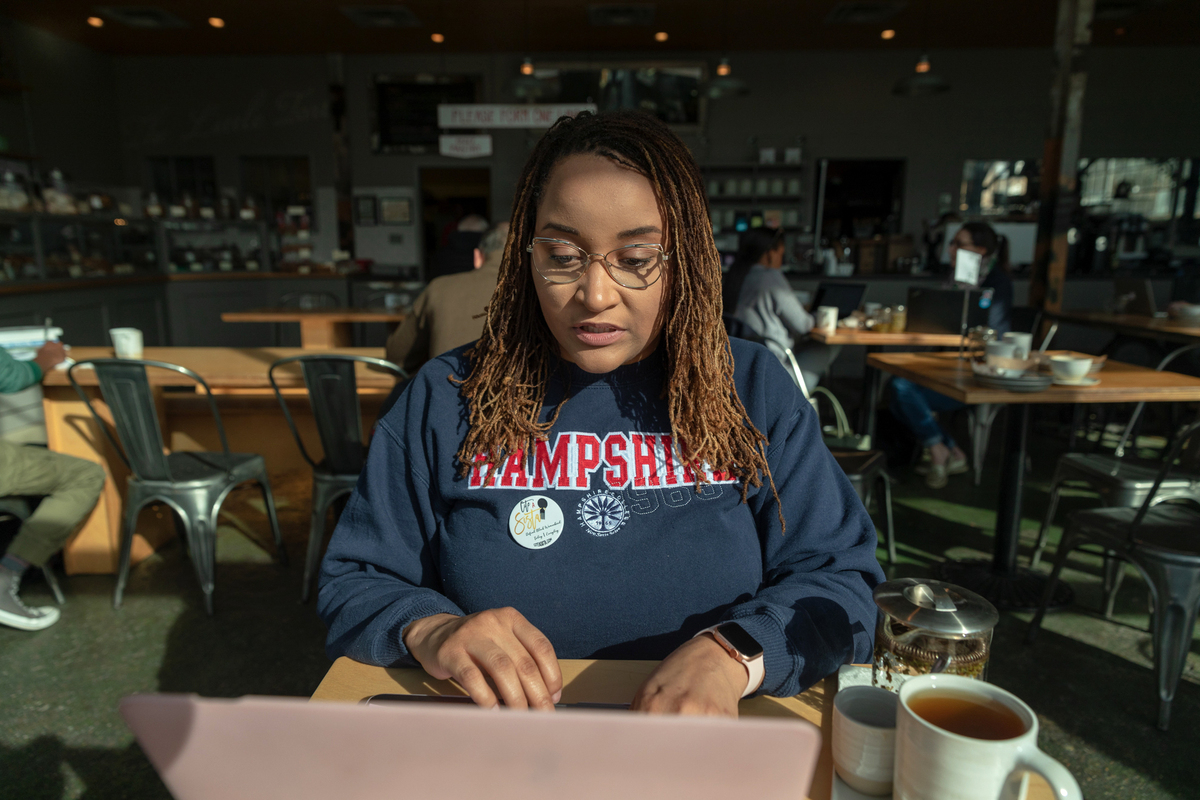 Williams says she knew friends who had acquired HIV the first time they'd had sex. Her favorite uncle also died of AIDS-related complications. Both of these experiences influenced her decision to take PrEP.

"I'm trying to make sure I'm not that person," she says. "I'm out here running half marathons and I'm vegan every now and then."

And she's been insisting on HIV tests since she was an undergrad in college.

Last year, she was dating a man who was living with HIV. He was on treatment and had an undetectable viral load, which meant he couldn't pass it on to her. Still, it got her thinking about her favorite uncle, who died of AIDS-related complications. And she thought of friends, women who had acquired HIV the first time they'd had sex.

But when she went to a women's clinic on campus, where she gets her HIV and STIs tests, they told her they didn't prescribe PrEP. For that, she'd have to track down a doctor at another clinic who was known to prescribe the pill. It took a trek across campus and all afternoon, but she left that evening with a prescription for Truvada. A self-admitted germaphobe ("I follow the CDC on all social media," she says), she also uses condoms to protect herself from other STIs and pregnancy.

"It just makes me more comfortable," she says. "I'm doing something for me. It's not dependent on anyone else."

She even mentions it in her online-dating profile. If PrEP was more visible and accessible, she says, it would have been clearer to her that "women can and should use PrEP." As it was, she had to forge the path on her own.

And maybe she would have had better answers for the women who quietly messaged her on Twitter and Instagram, asking her about the pill and how they could get it, too. (Those women declined to comment for this story.)

"Black women deserve sex and they deserve good sex," she says. "But it should always be safe, and this is another way to ensure that."

Heather Boerner is a science journalist based in Pittsburgh, and the author of Positively Negative: Love, Pregnancy, and Science's Surprising Victory Over HIV.

A previous version of this story said that the U.S. Preventive Services Task Force recommends PrEP to anyone at risk for HIV. Their recommendation is for anyone at "high" risk. The earlier version also lacked information on transgender women's HIV infection risk.