Accessibility links
At New York Fashion Week, Metastatic Breast Cancer Patients Walk The Runway : Shots - Health News At a recent fashion show, models came out about their diagnoses — revealing both cancer's scarring effects on their bodies, and their defiant embrace of life. 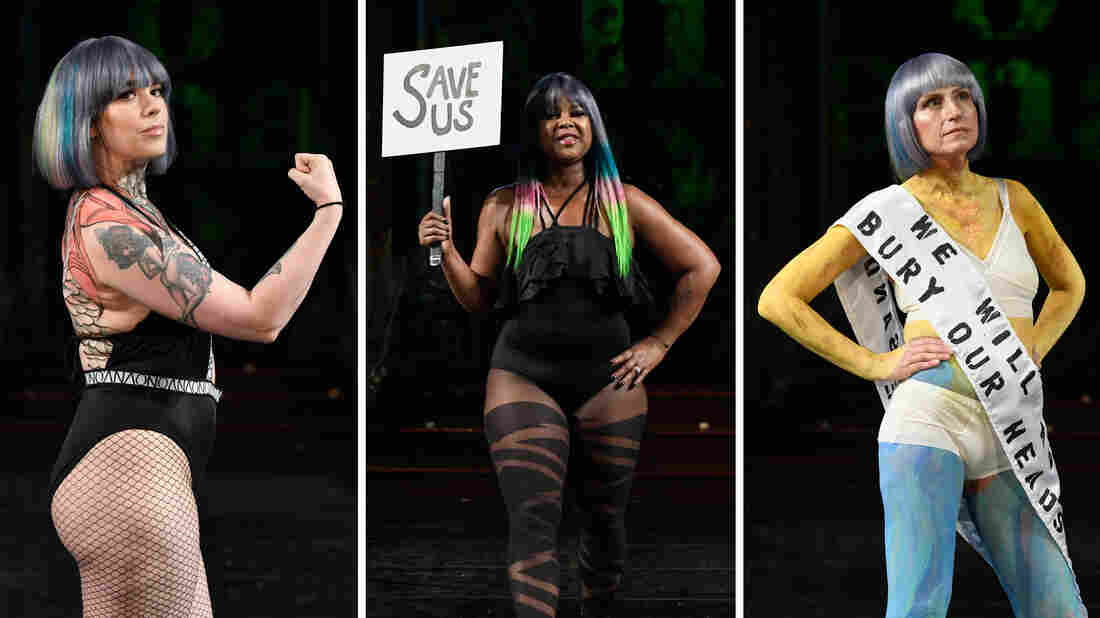 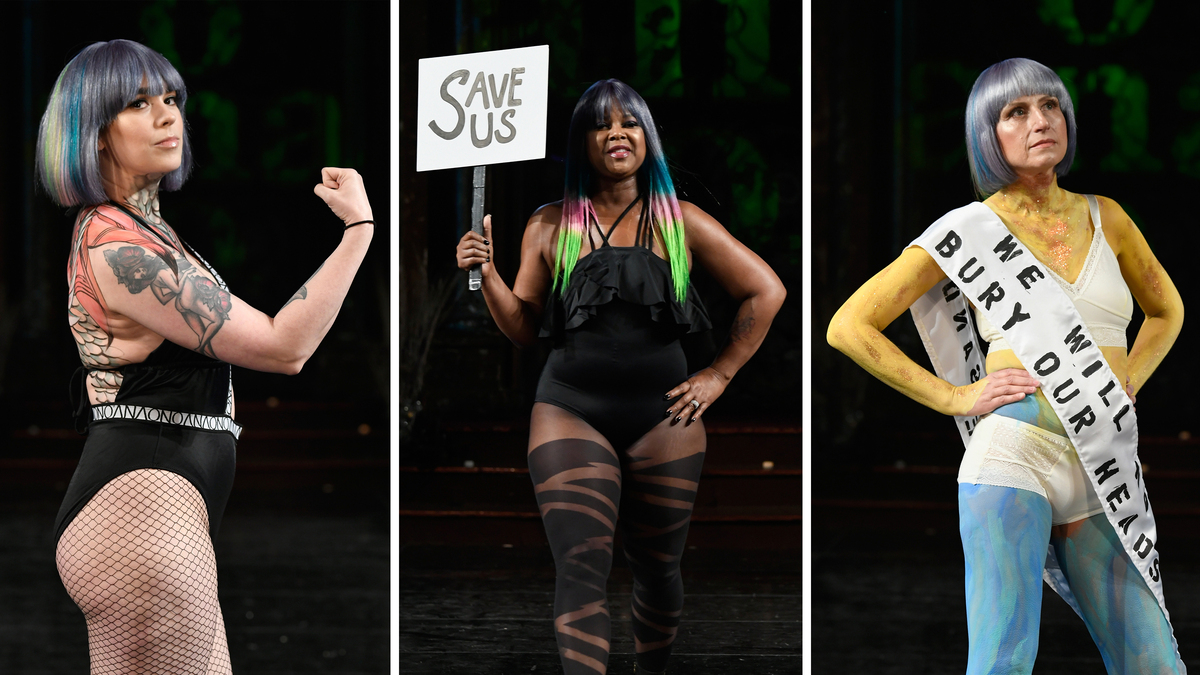 On a cold, bright Sunday afternoon during New York Fashion Week, nearly 600 people packed into an old building in Manhattan's Lower East Side for an unusual lingerie show.

The audience shouted exuberantly when the first model stepped onto the runway. Jaleh Panahi, of Kingston, New York, is a 73-year old practicing physician, mother and grandmother who's had metastatic breast cancer for eight years. Wearing a black head scarf, dangling earrings and a loose-fitting shoulder-to-toe outfit, she ambled gracefully, smiling and swiveling with her cane to Whitney Houston's "I'm Every Woman."

Panahi was one of two dozen models at the event with metastatic — or stage 4 — breast cancer that has spread to other parts of the body. They walked to express their feelings — courage, zest for life, even anger – about living with this illness.

"In this show we told the world that we have lost our breasts but didn't lose our femininity," Panahi said at the afterparty.

This was the third annual #Cancerland fashion show, put on by METAvivor, a nonprofit organization that supports research and awareness of metastatic breast cancer, along with lingerie company, AnaOno. The goal: Raise funds for research to improve treatment for metastatic disease, while changing public perception of the condition.

"It's about making people understand what metastatic breast cancer is, to wake up to the fact that men and women are dying from this disease," says Beth Fairchild, a 39-year old resident of Greensboro, North Carolina, tattooist and METAvivor's president.

Advanced breast cancer kills more than 41,000 Americans – primarily women – each year. New drugs extend the lives of a few, but not nearly enough; as of 2015, median survival with stage 4 breast cancer remained less than three years.

At the show, these patients chose to expose themselves — their lives, their bodies and their scars — defying old expectations of silence. The #Cancerland models are not shying away from cameras. They are choosing to make their illness visible.

On the runway, some models wore gray wigs tinged with METAvivor-themed teal, green and pink stripes. Some wore little but body paint, underwear and boots. Several carried signs: "I am Living with MBC," "Save Me" and "My Body." One wore a sash: "We will not bury our heads in the sand and die." Words, scrawled in black on women's skin, said: "FIERCE," "MOTHER," "METASTATIC".

The program took place inside the Angel Orensanz Center. Flecks of colored light streamed through stained glass windows, illuminating the dark space like a kaleidoscope, as the models strolled, sashayed and strutted under the nave.

A few revealed mastectomy scars and other wounds. One held flowers between her teeth; another wore a large crown. Maggie Kudirka, a slender ballet dancer in her twenties, moved en pointe to Rihanna's "S&M." Several paused and put both their arms up, in a V or a muscular U, signaling strength.

The show was started by Champagne Joy, a woman who died in 2017 from metastatic breast cancer at age 49. She was a New Yorker who'd always dreamed of being in a fashion week runway show. She founded the nonprofit #Cancerland and in February 2017, she organized the first show. For participants who knew Champagne, this was an opportunity to celebrate her life and spirit.

The event reflects a growing wave of awareness of metastatic breast cancer. Advocates for those patients point out that their concerns are often overlooked amid the general focus on survivorship after early-stage breast cancer. In recent years, several nonprofits focused on metastatic patients' needs have formed, including METAvivor.

Several pharmaceutical companies supported this year's program: Immunomedics, Allergan, Eisai and Pfizer. Fairchild estimated that ticket sales and donations in support of the event would deliver around $100,000 for METAvivor. "All of that will go to research," says Fairchild.

METAvivor seeks to change the course of metastatic disease, from a terminal to a chronic condition. With industry support, the organization now operates an annual $2 million budget and dispenses over 40 research grants. It holds advocacy events, lobbying days in Washington D.C., and fundraisers.

The models wore lingerie from AnaOno, a company led by Dana Donofree, a designer who was herself diagnosed with breast cancer at age 27. With items like front-closing bras, the line features garments designed for comfort after reconstructive surgery and mastectomy, as well as for other conditions.

"Fashion is about beauty and consciousness and style. It also gives us a platform to talk about our disease," Donofree says. "When we did our first show in 2017, the world did not know what breast cancer looked like."

For Fairchild, walking the runway "really gives you the sense of being supported by your community and it's a boost for your confidence."

"It takes a lot of courage for a healthy person to do what we all did, not to mention a cancer patient covered in scars, or bald, or both," she says.

An enthusiastic audience helped. Onlookers included models' friends and family, plastic surgeons, pharmaceutical executives, and breast cancer advocates. Dr. Judith Salerno, president of the New York Academy of Medicine, sat in the front row. The program "embodied courage and power of women and men who will not be defined nor diminished by their cancer," she says. "This event moved me in ways that I didn't expect."

Also attending was Linda Tantawi, CEO of Susan G. Komen Greater New York City, who wrote in an e-mail that the show "reflects acceptance and compassion for the totality of [metastatic breast cancer] patients' experiences."

One patient-model, Terlisa Sheppard, has had metastatic breast cancer for 17 years. Now at age 51, she flew from her Florida home to New York to participate in the fashion show; several relatives came to cheer her on. "I'm loving it," she said during the Saturday fitting. "I'm a little nervous," she admitted.

Sheppard weighed her circumstances, with metastases to the bones, lungs, liver, spine, abdomen and brain. "Where else can it go?" she said.

"I've gone through all of that, and hip replacement, blood clot in my lungs, hospitalized for pneumonia," she said. "One thing after another. And here I am, walking in New York Fashion Week. How dare I?" She grinned.

Another participant, Dikla Benzeevi of Los Angeles lost her mother to metastatic breast cancer in 1984. "Back then, cancer was not a word or a situation that was discussed publicly. It was kept in the family," she says. "We just kept it to ourselves."

Reflecting on her mom's experience 35 years ago, Benzeevi says: "She would be very excited about this show! She would also be very happy that it's not a secret anymore."

The models walked the runway wearing lingerie by AnaOno and some wore t-shirts from Empowerhaus. The show took place at The Angel Orensanz Center on Feb. 10th in New York City, N.Y.

Dr. Elaine Schattner is a journalist, patient advocate and physician who lives in New York City. She is writing a book about public attitudes toward cancer.

Photography unless otherwise noted by Meredith Rizzo of NPR.

Editing by Carmel Wroth of NPR. Design and development by Alyson Hurt of NPR.